I'm a bit behind on the blog as we were without phone and
internet for over a day and that put me behind on work so I had
some scrambling to do...

Still a bit behind on work.  Its amazing what one days lack of connectivity
can do to ones schedule.

We are currently in San Antonio Texas - leaving tomorrow
for the Gulf coast but I need to comment on the past several days before
I talk about today...   so here goes.

We left Rockhound a day early.
Our pockets were full of rocks and we had over 600 miles to our next
stop and I decided to break it into two days.
(all this sitting in one spot this winter has made me lazy when it comes to driving)

So - leaving New Mexico behind we plunged into West Texas.
(only 900 miles to the far side of the state) 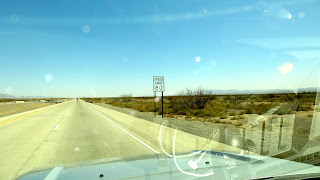 The park was built by the CCC in the late 30's as part of the New Deal...
So many great places that we've visited are the legacy left by the CCC.

The park centers around a fresh water spring that gushes about 28 million gallons of
clear cool water up out of the ground in this dry area creating a desert oasis.

The Bottom of the V 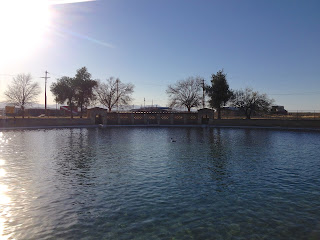 One of the ends. 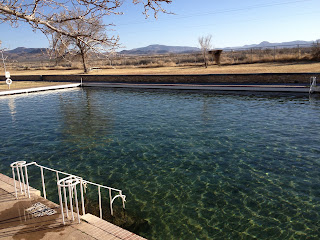 The outlet from the pool flows thru the park past Cabins built by the CCC,
and off to irrigate the nearby ranch lands. 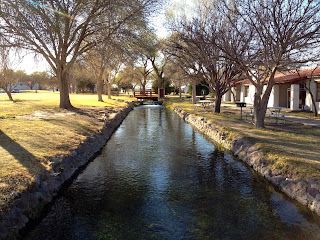 The pool house area built by the CCC 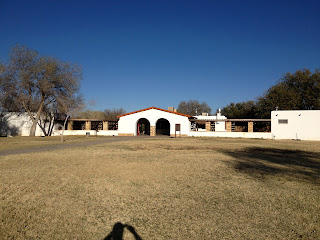 I forgot to get pictures of the campground but it really wasn't very nice anyway.
We were crammed into the last available space.
It turned out its spring break week in Texas and even out here in the middle
of nowhere this dusty little state park if full.
This is a theme to be repeated the next several days.

Our tiny back-in site was among the tent area and when we showed up
with our gigantic rig all of the people came out to watch us try and back in.
The road was tiny with cement curbs on all sides and I know that they were all
placing bets as to whether we would be able to get in.

Well as luck would have it - I jacked the trailer around 90 degrees and swung it in
there on the first try.  When we stopped my truck was still blocking almost the entire road,
so I had to unhitch and park it in a separate parking area
even though we were just there for the night.

Once we got backed in the crowd dispersed - obviously disappointed in the lack
of a show and went back to their pursuits.

Of all the remote places we've been in the desert we always had some
phone, interent, and TV.

Here we had zilch...  nada.
I kept turning our antennas and rescanning and nothing.

So we watched some Northern Exposure on DVD and hit the sack.

Kerrville Texas - I finally meet a site that I can't get into.