Well we moved about a week ago and have been spending a very nice week
at a county park campground just outside of Ashland, Oregon.

Our home since last Monday has been Emigrant Lake County Park.
Our camp loop is called "The Point RV Park"

Nice sites on Emigrant Lake, we have a great view, nearly deserted campground
and full hookups with 50 amp service.

I also have a super strong Verizon signal so getting work done here is a breeze.

A view of our side from across the loop. 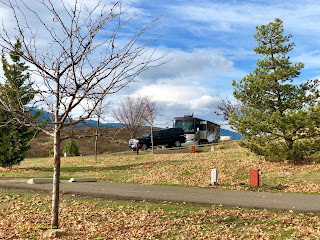 The view from the front windshield. 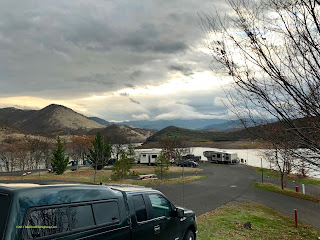 The nicest site in the campground is site 21 a long pull-thru at the tip of the point.
The problem was that like so many places these days - some Turkey
(not the Thanksgiving kind) reserved the spot for the weekend and then never showed.

Just outside of the park boundary are some beautiful homes and wineries. 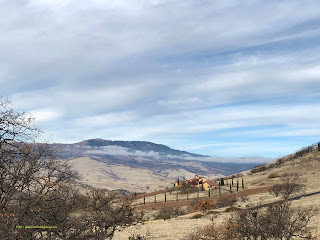 A college town and liberal bastion in Southern Oregon,
it is known for its Shakespeare Festival, its arts scene, and generally
eclectic and interesting mix of inhabitants. 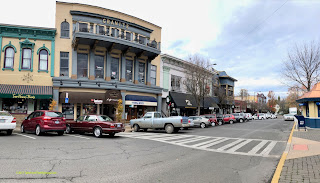 Ashland has become a retirement destination for cash flush retirees from
Southern California, and the housing prices have grown to match the influx
of those seeking a more laid back lifestyle. 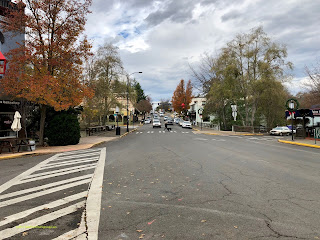 Numerous fine eating establishments along with shopping of all types
line the attractive main drag thru town. 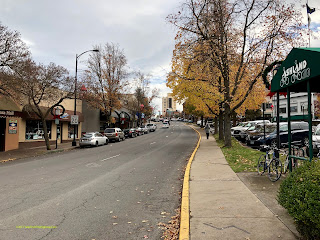 Running off the main street is Lithuia Park the Crown Jewel of Ashlands
many town parks.

The ice skating rink at the entrance to the park.

We arrived in town past peak fall color in this area so we did not get to
see the park in full bloom, but it must be incredible in the Spring and Fall because it
was lovely still at this late date.

Over 100 acres of both manicured and wild areas, it began life in the late 1800s
and contains Japanese Gardens, Formal Rose Garden, trees of all types and
has Ashland Creek running right thru the middle of the park.

One of the several beautiful reflective pools in the park. 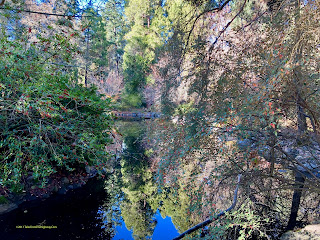 Another beautiful spot to hang out. 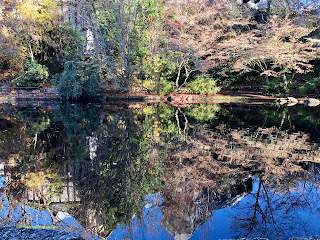 On Thanksgiving morning we had a beautiful sunrise. 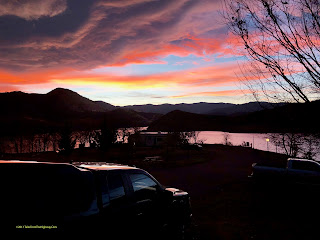 Kate prepared a delicious Thanksgiving Feast!
Turkey Breast, Stuffing, and all the trimmings.
(Notice the Doodles in the background) 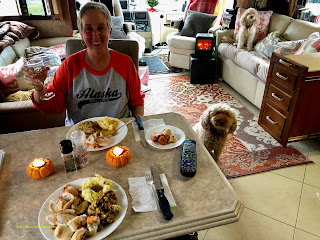 Dinner is almost done and still in the background the Doodles are waiting
for a handout. 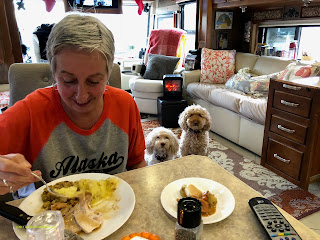 Today is our last day and this morning a Bald Eagle took a perch in a tree
not too far away. 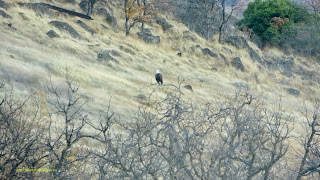 Tomorrow - Weds - we are wheels up again for a 3hr trip down Interstate 5.
We are working our way slowly to Ron & Maxines for the holidays.

Our next stop is Red Bluff, Ca, then on to Napa before we invade R&M's place.

We are looking forward to some warmer weather and drier conditions.

Well we got blown off of the Oregon Coast.
While Winchester Bay was quite beautiful...
the 70mph winds got to be a bit much!

So...  we relocated from the coast to 7 Feathers in Canyonville, Oregon.
The map below shows the route.

For some perspective:
The bottom of the map is the California State Line.
The top is Portland, Oregon. 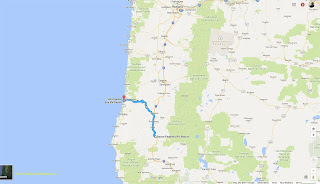 We had planned on staying here for 12 days but after 7 days of rain and
hurricane force winds we decided that we wanted to go somewhere that we could walk the dogs
without fear of them being blown away.

Seriously...
The locals are used to this.

We saw them sitting out side in all but the worst rain.

Our campfire ring was filled with water, but a guy nearby was sitting there with his
campfire going in a downpour.   Ugggg!

We had closed up the slides  due to the high winds and were living in a tin can.
The forecast was for at least 10 more days of this....
Our house was shaking from the wind...  and our doodles were soaked!
Time to re-evaluate!

Before we left however...  we needed to make one final trip to the beach.
With thousands of miles of fetch - the Pacific is an impressive ocean.

The storm waves were impressive. 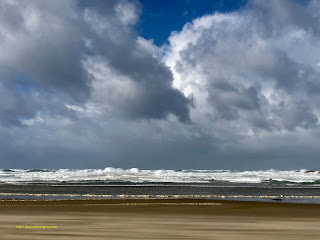 Not exactly a good day to go swimming. 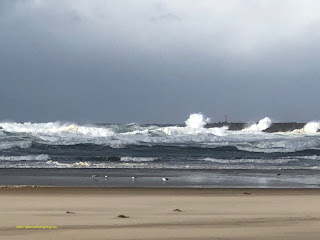 The winds at this point were about 45kts and we were getting sandblasted as we walked. 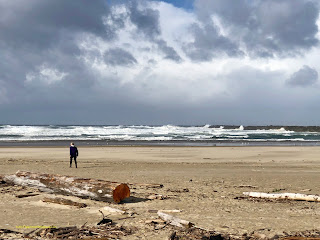 We decided to head inland away from the coast.
The drive from Reedsport, Oregon to I-5 follows the Umpqua River
and is very scenic. 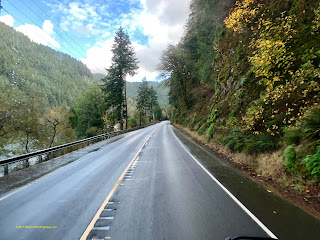 Our destination for the next 7 nights was 7 Feathers RV Resort.

Most of our West Coast Followers know 7 Feathers very well and no explanation is necessary.

Our East Coast followers however might not be as familiar with 7 Feathers.

Its owned by a Native American Tribe and consists of a Casino,
Truck Stop, and RV Park.

The folks at 7 Feathers do it right.
The park is well laid out, has wonderful amenities, is landscaped beautifully,
and maintained impeccably.

When you arrive, you pull under a portico to check in, so if it was raining you would not
even get wet checking in.

Someone is always there to open the door for you. 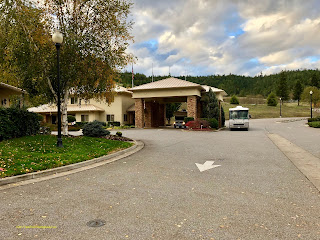 When you check in - someone will lead you to your space.
The spaces are well laid out, decently spaced, well landscaped, and
have all the features...
Cable TV, 50Amp FHU 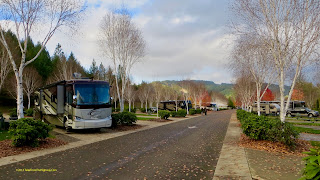 Kate and I have gotten into a routine.....
3pm (6pm work time on the east coast)
Head to the clubhouse for a dip in the pool and hot tub. 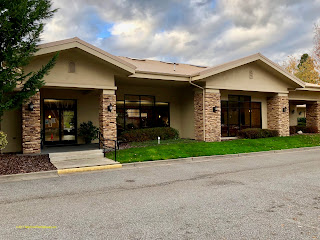 The pool, hot tub (on right) showers in the rear. 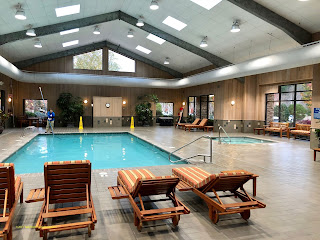 Another view of our site. 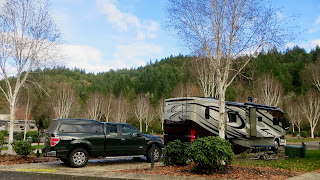 Our plan is to hang here for a week.

The weather wont be perfect, but at least we can have the slides open and get some
walking in with the Doods.

Not sure where we'll go after here but the rough plan is Ashland, Or,
There is an interesting county park on a lake (Emigrant Lake) that I have been eyeing,
and Ashland looks like it could be an neat artsy town with

Then down to
Redding or Red Bluff, California, then  after that, perhaps Napa Ca for a bit before
we head to Ron & Maxines for the holidays.

Thank you everyone for the emails about Gracie.

Finally after a month  - she seems to be getting better.
She is back to barking at dogs on TV and is starting to be her old self again.

I have been nursing her for a month now and I looks like its starting to pay off.

We were worried but I think we have finally turned the corner.

Thanks again for all of your concerns.
Posted by GregK at 2:47 AM 6 comments: 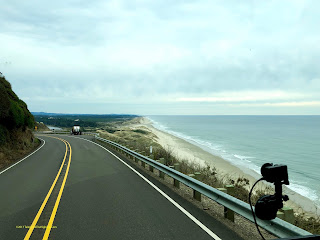 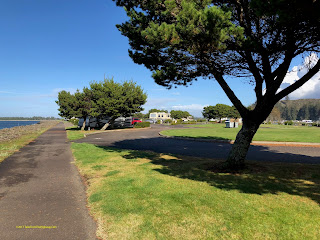 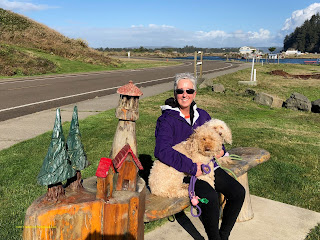 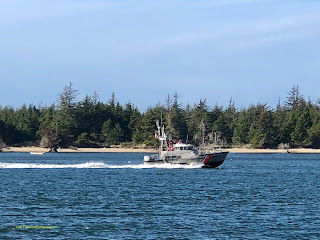 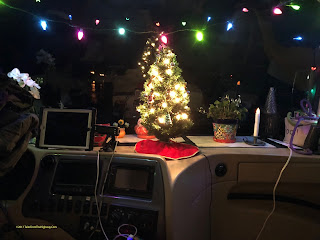