We concluded our 4 day stay in Quebec City Tueday and headed Northeast
along the St Lawrence River.

We found our RV Park - "Camping Transit" in Levis to be very nice for
our needs.   Full hookup and 50 amps.  It was conviently located just outside
of the populated city area in farmlands.   Near to Autoroute 20  (AUT-20) the noise
level was a bit higher than we like but other than that it was just fine.

There was a caravan here when we arrived on Friday but they cleared out on Saturday
and the campground was left fairly empty. 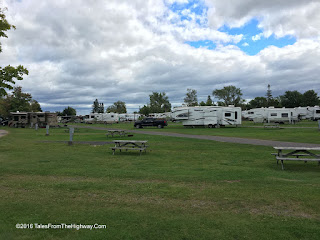 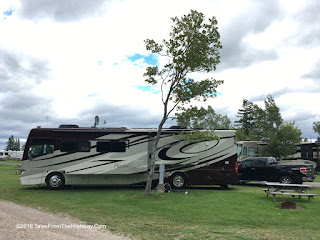 The drive Northeast on AUT-20 was pleasant with views
of the ever widening St Lawrence River. 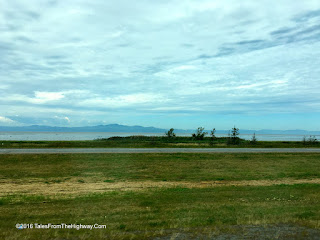 Later Quebec Route 132 passed thru some small picturesque shoreside communities.
From now on we will be following 2-lane 132 around the perimeter of the Gaspe' Peninsular. 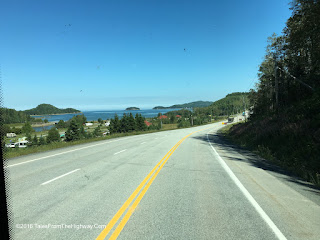 Our 200 mile drive today brought us to "Camping Annie" in Metis Sur Mer.
Its a nice RV Park set among a mixture of trees.  Full hooks with 30 amps.

My only ding on this place is that they laid out the sites 90° to the roadway rather than
angled which makes it harder to back in.
This is compounded by trees that were planted about 6' from the roadway.

If the site across from me had been occupied it could have been more difficult to
get into our space. 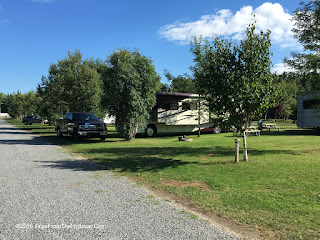 Other than that - you can see the campground is very pretty & quiet. 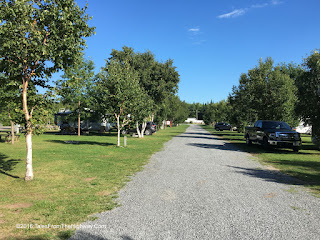 Weds we had some errands to do...
So for a lunch call we went to Captaine Homards Seafood Resturant.
A local Landmark - they have camping sites right on the STLawrence Seaway. 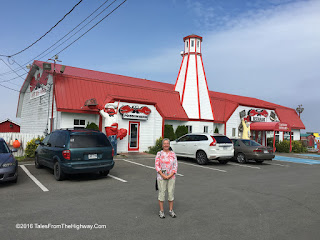 A friendly bi-lingual staff and english on the menu made ordering a snap. 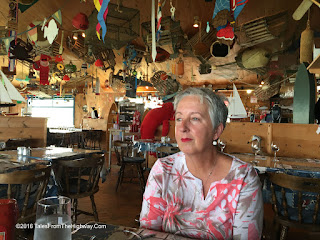 Kate had a lobster roll and I had fish and chips.
All was fresh and cooked to perfection.
We both left satisfied and happy. 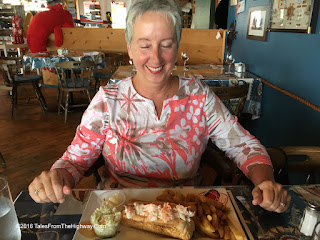 Today - Thursday -  was a 200 mile drive along the St. Lawrence and eventually
the Atlantic.    It was a beautiful drive.

The drive started out with rolling hills and farmland, turned to larger ups and downs with
long stretches directly on the coastline, and ended with a mix of both.
Thru the day we passed thru numerous villages with picturesque views.
The ever present Catholic Church was well represented
with impressive churches in each village.

Here is another drivelapse of the days trip.
I edited out a bunch here and there to keep it shorter.

SPECIAL BONUS QUESTION:
During the last 1 minute of the drivelapse is a short 1 minute song...
Do you know where that song is from?

The roads are a bit rough - but considering how far north we are - its understandable.
There was several construction zones with mud and gravel so my clean bus
is clean no more.

Parts of the drive reminded me of the Oregon coast. 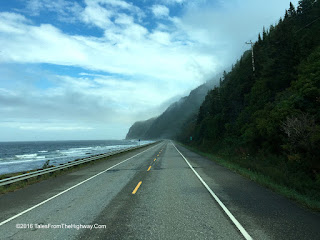 At times we had the windshield wipers on - not to clear rain, but to clear the salt spray as the
waves broke and the spray came over the roadway.
Stretches of the roadway are right along the seawall so the waves really spray the road.
It must be something when the temps are below freezing! 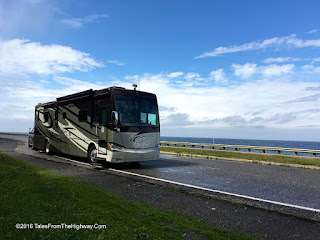 Parts of the drive reminded us of driving in Alaska. 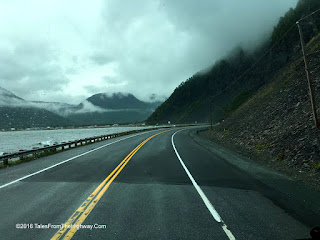 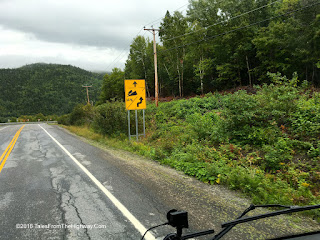 We are now in Forillon National Park at the tip of the Gaspe' Peninsula in
The Petit Gaspe Campground.
We have 30amp service but...  Gasp - the trees are blocking our Satellite.
Time to break into our 300 DVD's or watch a recording on the DVR. 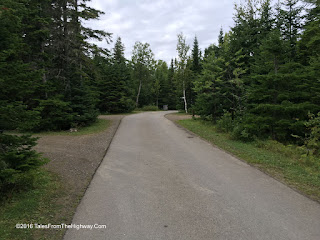 It's nice to be back in a forest campground.   It is dark and quiet.
The Canadian National Park sites are always nice.