Wow!
I love to go to new places that I've never been.
You have an expectation of a place before you arrive and then when you do
it is either less that what you envisioned, or a pleasant surprise.

Having heard so many good things about PEI I had some pretty high expectations
before getting here and now after a few days I can say those expectations have been
greatly exceeded.

This place is special.

We left Perce' Qc on Tuesday after Labor day and competed our
semi circumnavigation of the Gaspe' Peninsula and crossed into New Brunswick.

After another beautiful 240 mile drive thru coastal villages we arrived at our stop for
the night at Camping Colibri Sur Mer in Caraquet Nb.
Formerly a Provincial Park, it is located right on the water and has a mixture of
dry and serviced sites.

The full service sites are closer to the highway and away from the water.
We chose a site by the shoreline (#42)  that had 30amp and water.
We only hooked up electric as we fully expected to be dry camping for the next week
anyway, and have prepared ahead.

The campground was about 10% full and very quiet as the sun slipped below
the water and the day came to a close.

We had wanted to visit the Acadian Historic Site nearby.
It is a restored Acadian (French Colonists) Village, but our time is limited so
we decided to push on Weds and save that day for use later in the trip.

It used to be the only way to get onto PEI was by ferry but after much debate and finally a vote
by the residents of PEI the Confederation Bridge was opened in 1997.

At 8 miles in length it is the longest bridge in the world that crosses ice covered waters.
Traveling onto the island is free.
My return trip to the mainland will be $61cdn for the Bus and truck in tow. 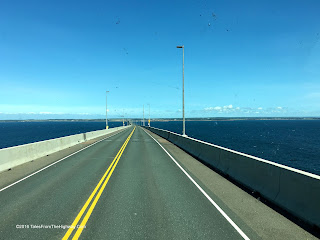 Our home while on PEI will be Cabot Beach Provincial Park.
The park has fully serviced, partial service and unserviced campsites.

We again chose a partial hookup (30a and water) so that we could have one of the nicest
views in the park.  Again - we are only hooked up to electric.
We and about 5 other RV's are parked on the cliff overlooking
Malpeque Bay and are being treated to the wonderful ever changing seascape. 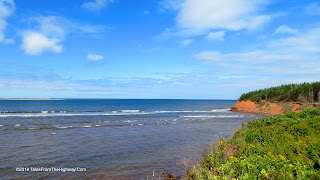 We are parked in Site F

Our plan for our first nights dinner on the island was to attend a PEI tradition...
A Lobster Supper.
We drove about 40 scenic minutes to the New Glasgow Lobster Supper, a local
institution that has been doing this since 1958.

First course is homemade bread, and we ordered a half litre of a nice Pinot. 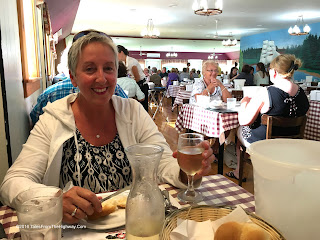 Next is all you can eat PEI mussels.
YUM! 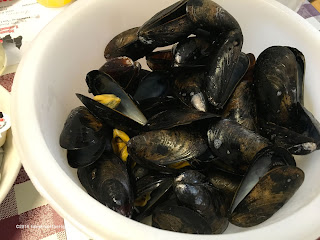 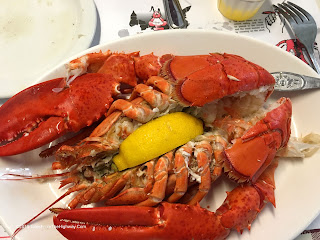 After the final desert course - Kate had Chocolate Cake and Ice Cream,
I had Strawberry Shortcake and Ice Cream - we took a different
route home on the meandering two lane roads that wander all over the island.

Our final treat to our first day on the island was this splendid sunset from our campsite. 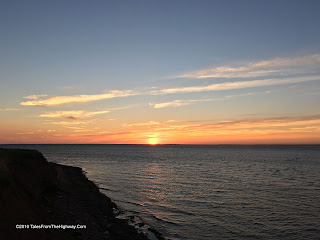 The setting sun painted the red cliffs with a deeper glow. 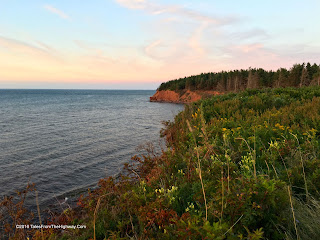 Thursday morning dawned cloudy with threats of rain.
The forecast for the day was mostly cloudy so we decided on a scenic drive
and took the long way to Walmart to do some provisioning.

Around every corner on the beautiful island is another surprise vista.
The fertile soil supports crops of all types to complement the
bounty that is harvested from the ocean. 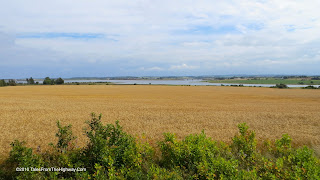 Not far from our Provincial Park is the Princetown United Church.
Throughout the Maritimes, the variety of the beautiful churches has been a treat.
I'd like to do a blog on just the churches.

The rolling green hills...   The picturesque villages and working ports...
The bays and inlets...  the red cliffs and farmlands...
Its impossible to convey just how beautiful this place is with pictures. 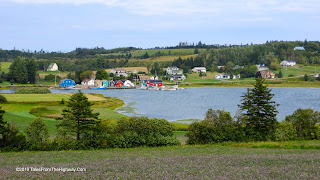 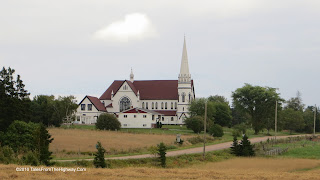 Just outside of the park gate is the Malpeque Harbor.
During the day we see the fishing boats come and go as they work the sea. 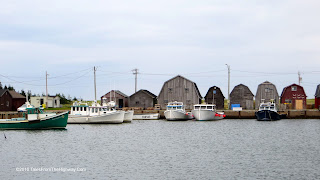 We have one more day left on the island.
Not enough to fully drink this place in for sure,
but we will do our best to take in as much as we can.

More to come from PEI.