On Thursday we left Scotia Pines and headed south and slightly westward
to the Fundy Coast of Nova Scotia.
We took some of the smaller roads enroute and got to enjoy a slower
pace as we wound our way across the country side and thru some small country towns.

Our destination for the next few days was Parkers Cove, NS at
the Cove Oceanfront Campground.

This campground was located on a hillside right on the Bay of Fundy.
Each row was terraced into the hillside so as you moved back from the water you also
moved up in elevation and retained the $$$ view to go along with
the $$$ price of the sites.

There is no cell service however so I've been forced to use park wifi,
something I have not had to do in quite some time.

30amp.   Full hookups on both sides allowed for either back in or nose in parking
to take advantage of the views. 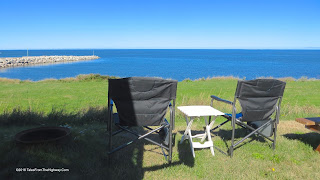 Looking down the row on the second tier up the hill.
There was a cheaper alternative closer to Annapolis Royal
(Dunroamin RV Park) but the view was the attraction here. 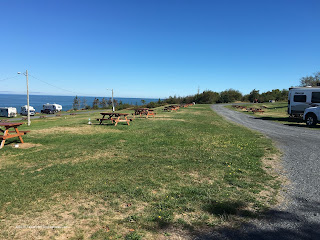 We drove into Annapolis Royal and stopped on the way at the Annapolis Tidal Power Station.
The only one in North America,  this 20MW station harnesses the large tidal ranges in the
to generate power twice a day as the tide recedes. 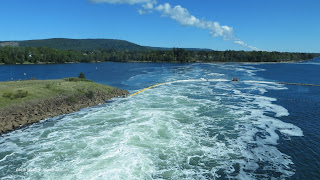 Next stop was Annapolis Royal - the former capital of Nova Scotia.
Originally French, then British, the town was fought over more than any
other place in North America.

The fort on the waters edge was built to protect the town.
The Cemetery next to the fort contains many soldiers the time period. 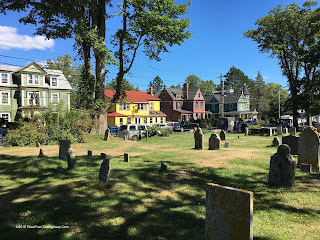 We walked around the earth works before visting the museum
that is in the old officers quarters. 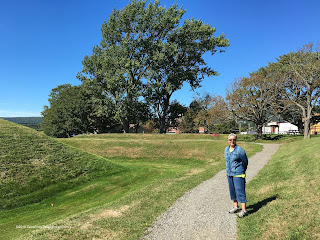 The fort is a National Historic site.
Our Parks Canada Pass came in handy once again
as it provided us free entry. 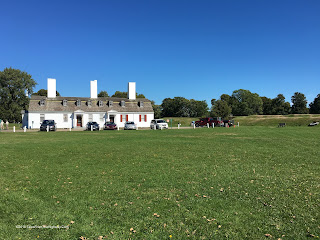 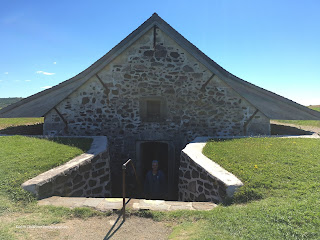 Inside the museum was a set of 4 needlepoint tapestries.
Called the Heritage Tapestries,  each one covered a century,
with all 4 quilts telling the 400 year history of Annapolis Royal.

It is 18' long by 8' high and took over 100 volunteers making
3 million needlepoint stitches to complete.

Saturday Morning it was time for the Annapolis Royal Farmers Market.
One of the best farmers markets that I have been too in a long time.
I think that the combined British and French influences really make for
a wider variety of products.

Kate enjoyed a Belgian Waffle.
The man who prepared it was from France - his wife was English. 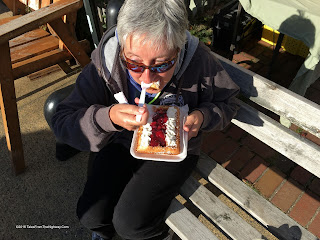 Next to our Campground was a marina with a fishing fleet.
I went over a couple of times to take some picutures of the changing water levels.
The tide here was averaging about 30' 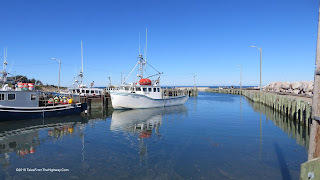 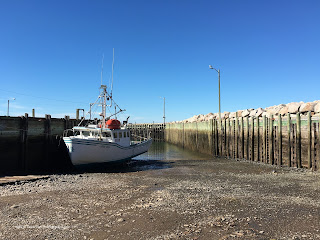 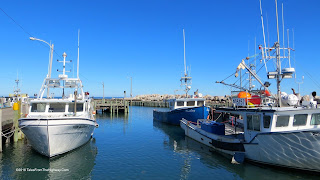 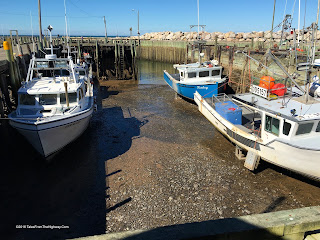 I left the GoPro running in the front of the bus and did a timelapse
of the tide coming in and out.   About 8 hrs is condensed into less than 90 seconds.

We move east to the Atlantic side

Today - Sunday - we picked up and moved from the Fundy Coast to the Atlantic side.
Our destination was about 120 miles east to Graves Island Provincial Park in Chester, NS.

The Park is on an island that is accessed by a narrow one-lane bridge.

The campground is on a hill overlooking a beautiful bay dotted with islands.

Our site - #19 is a back-in site with a great view.  Perhaps the nicest site in the CG.

Water and 30amp service.
As is usual in situations with no sewer, we are simply hooked up
to electric and conserving water as if we are dry camping.

There is a dump station on the way out if needed.

After getting settled in - its was about 3pm and we had some time to kill
before the Broncos game tonight on CBS,
so we decided to go out for an early dinner and see some
of the sights.

The 3 Churches of Mahone Bay are icons on this stretch of the coast and one of the
most photographed sights in Nova Scotia.

Unfortunately the light is not the best but it still was a pretty sight.
L-R is:
St James Anglican Church (built 1887)
St Johns Lutheran Church (1903)
Trinity United (1861) 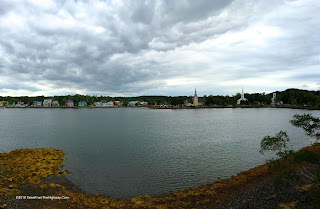 Another view of the churches. 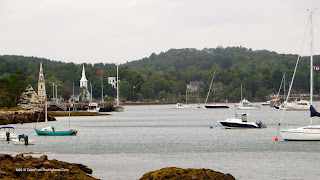 We've both been dying for a good meal of German Food and when I learned that
nearby Lunenburg was settled by Swiss & Germans, there just had to be somewhere good
to find a meal.    A quick search led us to the Old Black Forest Cafe and Gasthaus
on Route 3 just outside of Lunenburg.

When I saw that they had Zweibelrostbraten on the menu there was not complaints from
me.   The last time I had this was in Munich and this time was wonderful as well.
A tender sirloin topped with crispy fried onions and sitting in a dark gravy.
Spatzle and fresh vegetables rounded out the meal
(along with a German pilsner of course) 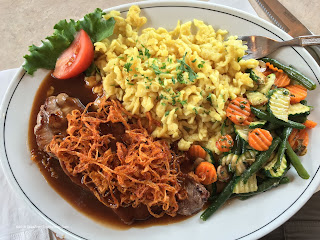 Kate had a roast Pork with mushrooms in a dark beer gravy with Spatzle. 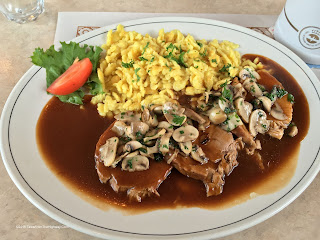 We took a pair of Apple Strudels home for later with coffee.

While here our objectives are to visit the Maritime Museum and Titanic exhibits
in Halifax, as well as Fairview Cemetary in Halifax where many victims of the
Titanic were burried.

Also on the list is to visit Historic Lunenburg which is
a UNESCO World Heritage Site.

But all of this if for the next post.

Meanwhile Aqib Talib just intercepted a pass and ran it back 46yds to put the Broncos
up by 10 points.

I'm going to put the computer to bed and enjoy the rest of this game.