Monday morning dawned foggy and with a steady rain.
Having anticipated the rain we put plan B into effect which was to head to Halifax
for the day instead of Lunenburg since the Halifax itinerary would
expose us to less of the elements.

Enroute to Halifax we detoured towards Peggys Cove.
Our first stop was the SwissAir Flight 111 Memorial.

SwissAir Flight 111 was a scheduled flight from NYC to Geneva.
Nicknamed the UN Shuttle due to the large number of UN personel who took this flight,
the flight experienced an inflight fire and crashed while trying to land about 5 miles
off of Peggys Cove in Sept 1998 resulting in the loss of all 229 people on board.

The view of the memorial as you walk the trail. 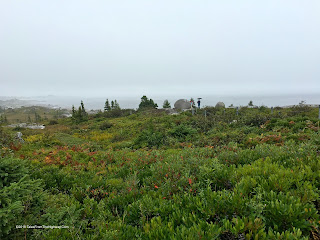 Many fisherman from Peggys Cove and surrounding harbors participated in the initial
rescue effort and the tragedy had a profound impact on the local communities.

Looking out to sea towards where the flight went down. 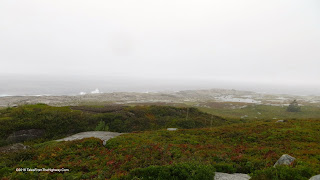 Leaving the memorial, the somber weather matched our mood.
Our next stop was the iconic Peggys Cove.
One of the most picturesque fishing villages along the Nova Scotia Coast.

A lighthouse marks the rocks at the head of land.

Staying with the somber visitations of the day, our next stop was the Fairview Cemetery in Halifax.   It was here that 120 of the victims of the Titanic found their final resting place.

Halifax was a key port in laying the new telegraph lines from North America to Europe,
and the fleet of Telegraph ships were based here.

When the Titanic sunk, the White Star Line chartered the Telegraph ship
ss Mackay Bennet to immediately steam to the wreck site
to try and retrieve as many bodies as possible.

Within about a week the ship had recovered about 190 bodies while another 116 were
too badly decomposed or without any identification so they were wrapped and buried at sea.

120 of the Titanics deceased were burried at Fairview Cemetery.

The White Star Line purchased the plot below for the graves.
The headstones are arranged to form a bow of a ship. 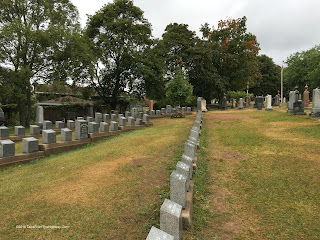 Each body was given a number and a simple headstone.
Some family then placed larger headstones.
As bodies were later identified, the name was added to the stones.

It was not till 2008 that the Canadian Armed forces were able to positively
identify him thru DNA as Sidney Goodwin - aged 19 months.
The reason no one had stepped forward was that his entire family
(8 total) had perished in the disaster and were never recovered. 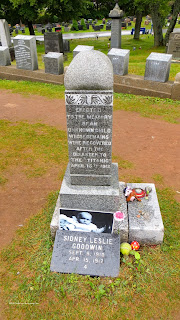 Another interesting headstone is that of body # 239 Ernest Freeman.
Listed as a deck steward, he served as secretary to
White Star Chairman J Bruce Ismay during the voyage.
Ismay - who survived to his eternal shame -  paid to have this stone erected. 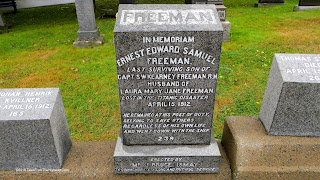 Below - the stone of Alma Paulson.

Her husband, Nils, was a miner in Sweden who emigrated to the US before his family.

After obtaining a job as a Tram Conductor in Chicago Nils finally saved enough to pay
for his family to join him and booked passage.

His wife and all 4 children perished that cold April night. 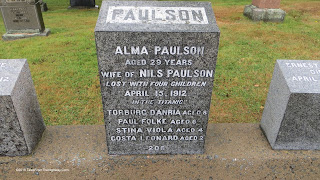 Below - a stone of an unknown. 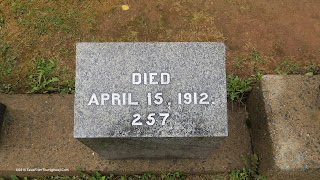 We had hoped to visit the Halifax Maritime Museum but we ran out of time.
The Museum has an exhibit on the Titanic including information about
the recovery efforts but this will have to wait for another day.

Our day concluded, we returned to the bus for the night.

Tuesday was our final day at Graves Island Provincial Park and we decided
to spend an afternoon visiting Lunenburg, an easy 30 minute drive from the park.

In our travels, we love to visit churches to see the different styles and in Lunenburg
St Andrews Anglican Church was a worthwhile stop.
It is the second oldest church of English Origin in Canada and traces its roots
back to the 1700's
It was built in the "Carpenter Gothic" style, and is a stunning example of the
woodworkers art. 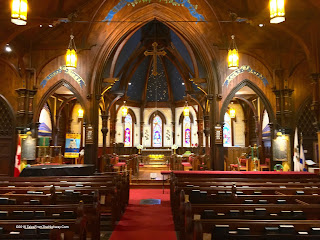 Above the altar the ceiling had stars painted on the ceiling.
During the rebuilding, the stars needed to be recreated and when researching the exact pattern,
they learned that the original stars had been painted on the ceiling to show exactly what the
night sky in Lunenburg would have looked like on Dec 24  AD1.   The night before
Christ was born. 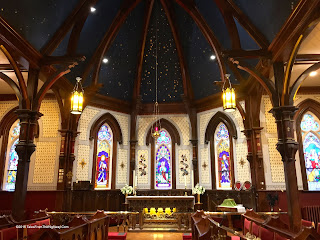 Some other views around town. 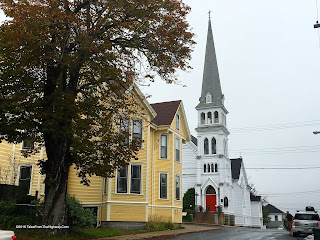 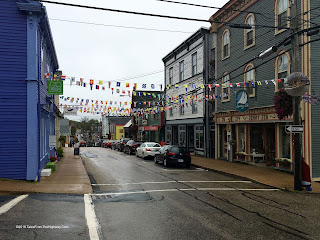 We eventually made it down to the docks.
Strolled thru the Museum and walked the piers. 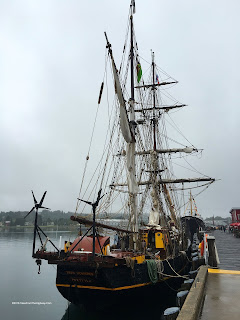 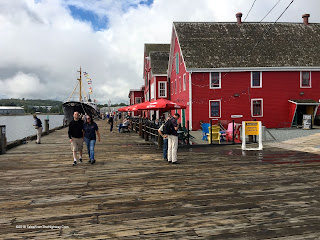 The Lunenburg Academy Occupies the high spot in town at the top of Gallows Hill.
It can be seen from miles around and is the only surviving 19th century
Academy Building left in Canada. Leaving town I had forgotten to get a picture of a "Lunenburg Bump"
An architectural feature prominent on many homes in town, this extension above
the entryway can be found in many shapes.   Round, Square, Hexagonal. 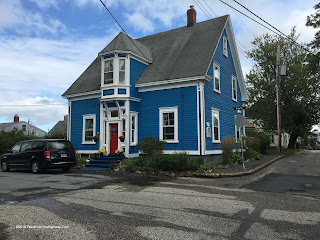 Our short stay in the Halifax area has now come to a close as time
pressures are going to move us on.

Next stop will be Cape Breton which is from where I am finishing
this post that I began 2 days ago.