We have been enjoying our stay in Forillon National Park.
Our campsite in the Petit Gaspe Campground in the park is long and
has a private area in the rear for the firepit and picnic table.

It took a bit of maneuvering to get into the site due to some obstructions but was no big deal.
A lot of people came by to check out the bus since most of the units in the campground were
much smaller but there really was enough room to maneuver it in.  Only some of the
spaces however would accomodate our rig - mostly due to problems backing in.
Site 170 would probably be the best for a big rig as it is on a curve and you would almost
back straight into it from the roadway. 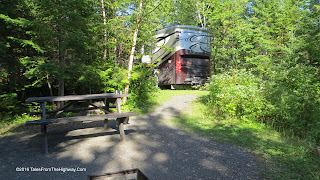 People talk about French Canada and how the people are not friendly but in our travels
nothing could be further from the truth.
We politely greet them in their native tongue as we do in any foreign country
and have found them immediately opening up to us in English if they spoke it.

In those few times they did not speak english, we had fun communicating and
sometimes were assisted by some other customer who did.

Then again... since we both don't speak a lick of French they could have been telling me
to go pound it where the sun don't shine while smiling at me and I would have been
replying...   "oui..  oui"

Our neighbors in the campground were mixed Anglo/Francophone families and it was
amazing to listen to them hold a conversation.
They would talk to each other alternating between French and English from
one sentence to the next, both languages being native and interchangeable to them.

Touring the park, one beautiful seascape after another provided a feast for the senses.
We walked the rocky shores while enjoying the great sunny weather and  mild temps. 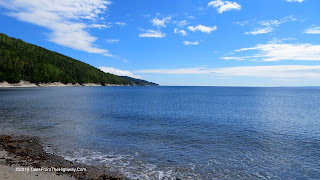 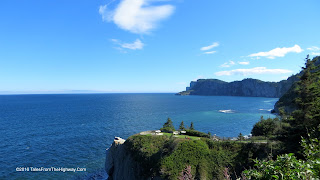 Located on the tip of the Gaspe Peninsula, the seafaring heritage of this area is evident.
One of the places where that heritage is preserved is at the Blanchette House...
The preserved home of the Blanchette family which was occupied thru
the early 20th century.

The home, barn, fishshed, woodshed,
and other structures along with costumed guides tell the story of these
settlers who fished for Cod in the ferile local waters.

The Homestead is nestled on the side of the hill overlooking
the bay and has a beautiful view.

The Fish drying shed with the house beyond.
The Cod was caught with nets from Dories like in the picture.

Life was hard but the view was beautiful.

Our 2 day visit over, we resumed our drive around the Gaspe' with our next stop
61 short miles away in Perce.

The drive was scenic as usual, mostly following the shoreline with an occasional
diversion up and down a forested hillside, or thru a small village.

Just before arriving in Perce we climbed a very steep grade to the top of a hill
that then dropped steeply into town.

A 17% Grade, about 1 mile long, going down off of the summit into the town of Perce'. 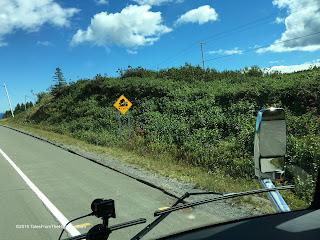 Looking down the hill into town.
At the bottom of the hill...
50kph or 30mph. 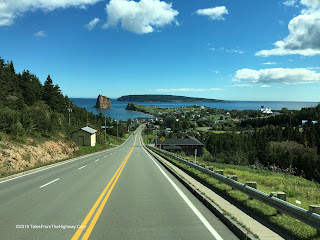 After settling into our new home, we immediately headed into town. 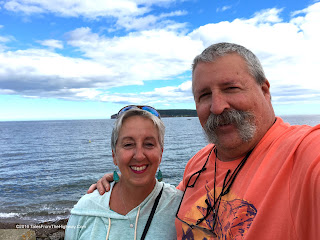 A panoramic view.
Bonaventure Island is center-right.
Bonaventure, now a National Park, is one of the largest
accessible bird sanctuaries in the world.

We stopped at a local Boulangerie (bakery) and bought some delicious
crusty multi grain bread.
One of the great things about traveling thru French Canada is the French Bakeries. 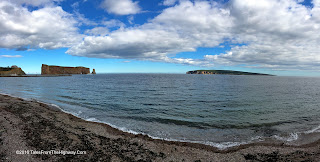 We are perched on the hillside at "Nature Ocean Chalets Camping".
Our view is scenic and our site large with full hookups (30amp).

The park is made up of widely spaced sites, some seasonal, some transient.
The roads are grass and gravel and were not heavily graded and
they cross a variety of rolling terrain.

In some points the RV will be leaning a bit to one side or the other as you transit the roads.
I mention this because some of you might not be comfortable taking your
coach on rolling terrain like this.

Its not a big deal but to some folks it would be
a bit unusual compared to your typical RV park with flat roads.

There are several RV Parks in town, some perched right on the edge of the cliff and
with perhaps even better views.   The sites there are much closer together however and
right next to the highway so there are tradeoffs.
I think my decision to stay here was a good one for us. 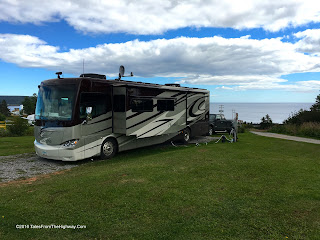 This morning at 5am I looked down towards the foot of the bed,
our bedroom window was facing the rising sun.

So of course I had to get up and snap a few photos of the sun rising over the ocean.

The colors began the day softly.

Then the sun broke free of the Oceans hold  and ascended higher with a burst of Orange.

Today was a bit of a down day.

We took a short trip about 5 miles further east on 132 (actually west of town)
to a local eatery that I read about when researching the trip.

Situated on the fishing docks in a small harbor - we were not disappointed. 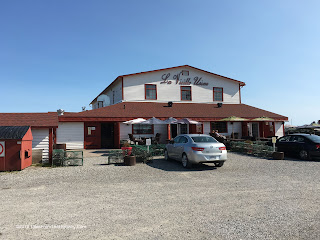 We both opted for the sautéed Cod.
All the seafood served here is locally sourced and fresh.
The cod and lobster comes from the boats in this very harbor, and the crab
from one village down the road.

Our lunch had been swimming in the cool clean waters just hours earlier.

A local microbrewery on the other side of the harbor provided the beer.
Hand cut fries and a fresh salad with an olive oil and lemon dressing rounded out the meal.

Fresh is the keyword here.   The food was fresh light and delightful.

For about $35 US, we had a memorable & leisurely lunch in a picturesque outdoor setting.
Did I mention the fish was fresh? 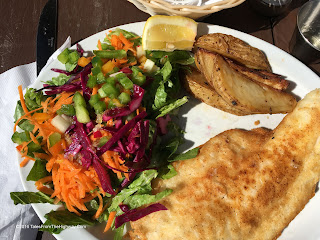 After lunch we strolled up to the second floor of the restaurant.
What was formerly the Cod Drying Room for the harbor, is now an artist loft and
contained an eclectic mix of pieces offered for sale.

Back to the bus - I made dinner for the Doodles while Kate ran back down the hill into
town to buy some more fresh bread and some sweets at the boulangerie.

The bread - well that will be for lunches when we hit the road on Tuesday.
Its really good!

The sweets - their hours are numbered.