We have pulled ourselves kicking and screaming away from Las Vegas.

After a week anywhere I am usually getting wanderlust and ready to go wheels up,
but leaving the beautiful Las Vegas Motorcoach Resort certainly makes it
a more difficult proposition but we have places to be so
northward we push on.

Before we did however...
We made a last minute visit to "Barking Dogs"
Our Favorite Doodlewash in the USA

Kate & I gave Gracie and Lucy a bath and a haircut before we left town.
It might be a while before the beasts get one again.

After the warmth of Las Vegas - the higher altitude added to the cool temps.

The Beaver KOA was nothing special but it was an easy off and on the interstate
and perfectly fine for an overnight.

Sunday morning we took a leisurely departure and headed to our home for the next week or
so - Deer Creek State Park.

Since its still the off season the park is first come first serve so I planned a Sunday
arrival just in case the park had been full.

Its a big summer boating destination and only about 40min out of Provo,
but with snow on Friday I figured it would be empty
and we were not disappointed.

We got one of the nicest sites in the park.

On the passenger side - Deer Creek Reservoir

In front of us - The Wasatch Front Range. 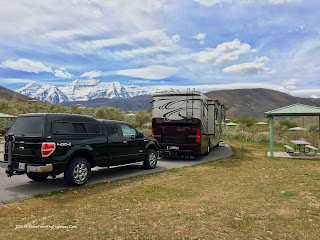 Full hook ups with 30amp service.  Its a beautiful and convenient location.

My Verizon service however is very sketchy... I have a -110-116db signal
which is very poor - even with my external antenna.

I tried my old Cellphonemate amplifier but since they added all the new
LTE frequencies it does not include them so its not working.
I have a new one is on order and should be here tomorrow.

The view out the front window is Mount Timpanogos,
The second highest peak in the Wasatch Mtns.
Just behind the dark ridge and at the base of Timpanogos lies
the Sundance Resort. 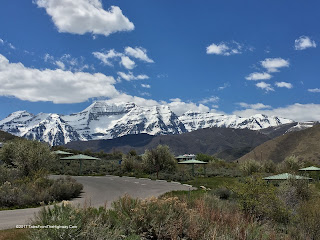 Weds afternoon after the work day ended we went for a late lunch to Sundance.
Owned by Robert Redford it is a community designed around conservation and
appreciation of the arts.

In January, it hosts the Sundance Film festival with additional venues
in Park City, Salt Lake City and Ogden.

It is the largest independent film festival in the US.

About 15 yrs ago I attended a Financial Conference here so it was sort of a homecoming.

Kate and I ate lunch at the Foundry Grill.
Decorated with early century implements the decor pays homage to the frontier settlers,
farmers, and miners who settled this land. 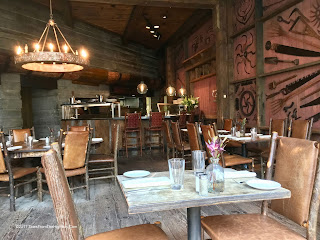 We had a lovely table at the window. 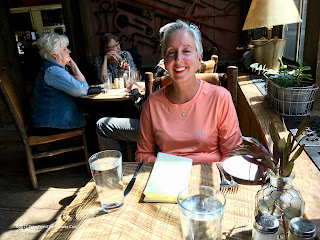 I've been dying for a good burger and this one was written up as one of the best in Utah.

A Black Angus-Wagu Burger with Gold Creek White Cheddar,
Pickled onions with all the fixins and Hand Cut Garlic Fries.

It was perhaps the best burger I've ever ate! 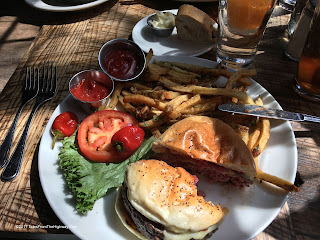 After lunch we walked around the resort.
A stream cuts thru the middle. 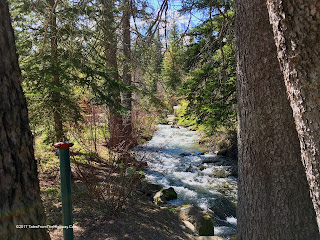 The resort has a conference center, film screening room,
and condos and homes.  The blend into the environment and are almost invisible. 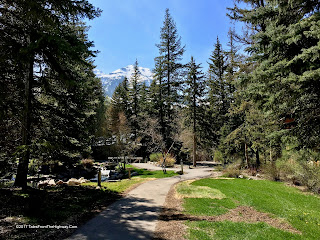 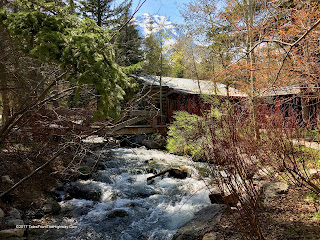 In the winter it is also a ski area.
In the summer you can ride the chairlift up the mountain, ride zip lines etc.
The resort is also a popular venue for management retreats like the one that I attended years ago.

Today we drove east from our campground into Heber City to pick up some
work packages at the UPS store in town.

While there we made a quick side trip to Park City.
On the way back we stopped for a quick photo of the Heber Valley

Our campground is over closer to the base of the mountains in the distance. 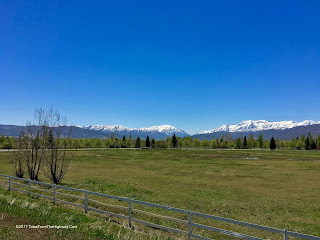 Its a beautiful and quiet area where we are staying.

Other than a "neighbor" who pulled in the other day and let his two male pit bulls
run loose...    its been perfect.

There has only been one or two other RV's here but now that its Thursday and the forecast
is for warmer weather - the early weekenders are starting to arrive.
I have a feeling it will be a busy weekend but come Sunday night we should have the
place almost to ourselves again.

We are here thru next Tuesday then its Northbound.