Jasper AB to Dawson Creek BC.

Surrounded by the snow capped peaks of the northern Rocky Mountains,
in a mixed forest of Ponderosa Pine,  Aspen, and White Birch,
we spent several wonderful days in Whisters Campground
in Jasper National Park.

There are mixed sites.  Some have full hookups and pull-thru sites.
We had a back in with electric only.
I was surprised however to find it was 50amp.
Usually as you get north 30amp seems to be the norm.

The campground has a wonderful trail running thru the center of the park.
We walked it from end to end several times..

We took a drive to check out some of the local attractions.
Along the way we passed two Elk Cows grazing along the side of the road. 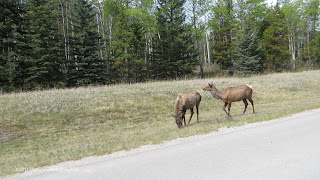 We took a side road - Highway 93a for a different perspective on the area.
The Astoria River on highway 93a was a scenic stop.

Our destination was Athabasca Falls.
The Athabasca River originates from the Columbia Icefield, which you might
remember was one of our stops on the Icefield Parkway.

A short hike from the parking area brings you to the falls, and then
there are trails running all over the area from there. 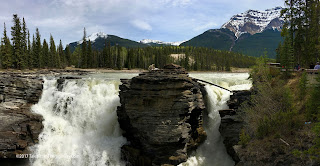 The shot below is where the falls go over the edge of the 100' drop. 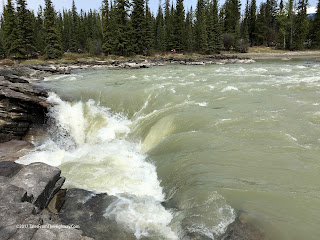 We took a short 1/2 mile hike upstream from the falls to enjoy the changing views. 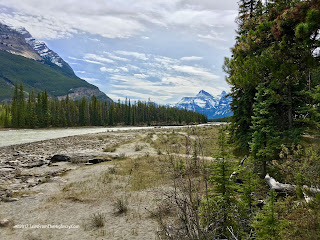 Returning to the falls, we then took a hike down into the gorge below the falls.

Below the falls, the river slows down and widens.
From here on it provides wildlife habitat thru the National Park
and beyond as it works its way north - eventually joining the Mackenzie
River and the Arctic Ocean. 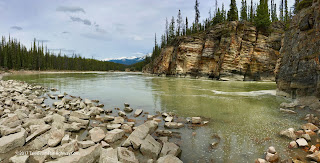 Looking back at the falls from below.
You can see the 93a bridge above the gorge 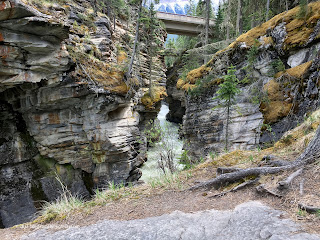 On our morning of departure to Dawson Creek we had a large Elk Cow roaming
about the campground.  You can see that she is shedding her winter coat. 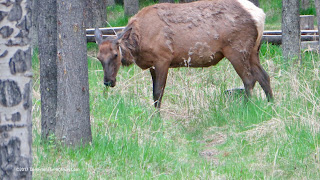 View from the drivers seat as we departed the Whistlers Campground. 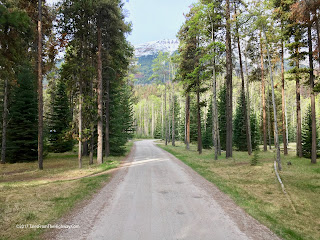 Our next destination was Dawson Creek, Brittish Columbia, and mile Zero
of the Alaska Highway.

Our route for the day took us east from Jasper on TC-16
and then North on AB-40 to Grande Prairie, Ab
where we headed east to BC and Dawson Creek. 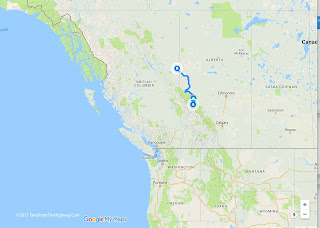 AB-40 is a remote and scenic route.
We had a pair of Bull Moose that got spooked and ran alongside of the Bus.
I was too busy slowing down and keeping clear of them to get a picture, but it was amazing
how fast they could run. 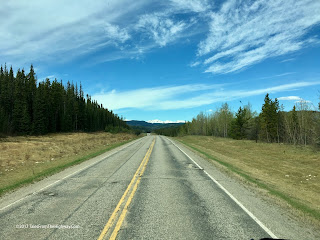 Later on the ride we passed a herd of Dall Sheep alongside the road.
I could not stop here so this is the best picture that I could muster. 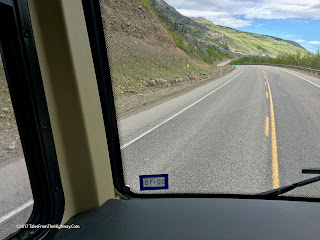 In Beaverlodge, Alberta we had to stop at the Big Beaver for a photoshoot
with Kate and the Doodles. 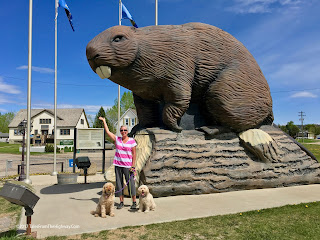 We arrived at the Northern Lights RV Park in Dawson Creek around 3:30 after
about 300 miles or so of road time.

The park is nothing special but Dawson Creek is convenient as the start of the
Alaska Highway and has all the stores that you would need.
Walmart, Safeway etc. 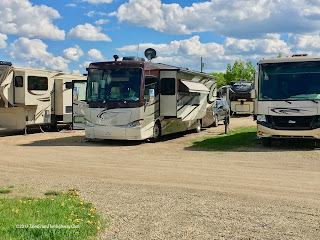 Another view of the park. 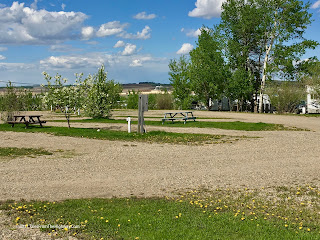 We stopped at the Mile Zero sign in Dawson Creek to take our obligatory photo. 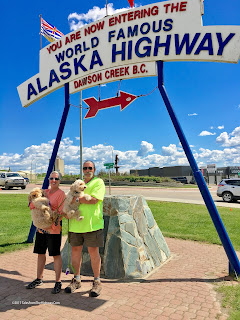 The Alaska Highway was built by the US Army Corps of Engineers in repsonse to the
bombing of Pearl Harbor, and the fear of an invasion of Alaska.
Prior to this road there was no ground route to Alaska that the US could have used to
move troops in the event of an invasion.

The construction of 1,700 miles was completed in about 7 months thru extremely
difficult territory and and under the harshest of conditions.

Here is a photo of the road under construction. 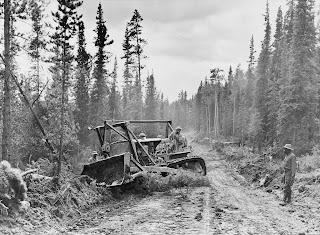 Before we left Dawson Creek, we drove about 18km north on the Alaska Highway
to visit the Kiskatinaw Bridge.

Built in 1942, it was constructed to replace the temporary "pioneer bridges' that were hastily
constructed by the US Army during the initial rush construction of the Alaska Highway.

This three-span timber truss bridge has an amazing nine-degree curve – a curve that the engineers designed to accommodate the highway’s steep change in grade on the west end and the need to land at a notch in the cliff on the east end.

At the time, it was the first wooden curved bridge to be built in Canada. 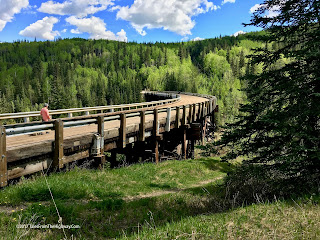 Constructed with a wooden deck, it is still in use today and we drove the truck
across where we parked while we visited the structure. 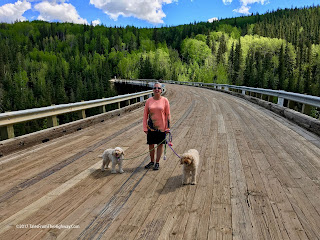 We drove up to visit the bridge as the bus exceeds the weight limit so we would
not have been able to visit otherwise.
The highway has been re-routed and no longer uses the bridge as part of the
main highway.

Tomorrow we leave Dawson Creek and head back up the Alaska Highway.
We will be heading into areas with limited (and no) internet so our next post will be ??

Unlike last time - our schedule is flexible so I have a number of places along the way
where we might spend more time.

One advantage this trip is the commercial fuel cards that I acquired.
Unlike in the US where there are alot of Truck Stops and RV's can use the truck pumps...
Canada seems to segregate the Commercial and Retail pumps.
The Commercial pumps  which have much more room use special fuel cards.

So rather than having to squeeze into gas stations, these cards allow me to use the
unattended "cardlock" facilities which are larger and used
by big trucks.   It makes it much easier to fuel the bus and simplifies
fuel planning.

You can see below how much room there is at the Cardlock Facilities.


Well its time to go so stay tuned for some great places as we continue northward up
the Alaska Highway.