It's been a while since we checked in last, we've been busy Beavers,
and now its time to play some catch up.

I had almost 900 photos to sift thru to try and pick some for this blog.
I hope this sample gives you a feel of our experiences the last week or so.

We left Valdez and traveled to the Anchorage area.
About 50 miles by sea - but 350 miles by land.

First we said good-bye to our beautiful view in Valdez.

(remember you can click on photos to enlarge them)

Our travel map below.
#1 is Valdez
#2  is Williwaw Natl Forest Campground
#3 is Seward, Ak
#4 is Homer, Ak where we are currently 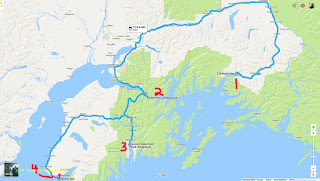 From Valdez we drove to Williwaw National Forest Campground about
an hour past Anchorage.   We return here on our way off of the Kenai so will
cover it later.   We stopped at Williwaw for a few days and used it as a base to
reprovision and meet our friends Eric & Pat from Pittsburg who flew in and rented
a Class C RV and will spend the next 3 weeks traveling with us.

After hooking up with Eric and Pat we headed 120 miles south to Seward,
and spent 4 nights at the Seward Waterfront Park.   Its a municipal campground with
mostly dry camping but there are some full hookups.   We of course opted
for the dry spots with the million dollar views.

We even get a clear view of the sky and have satellite TV. 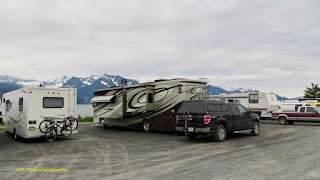 Our little traveling group has temporarily grown in size! 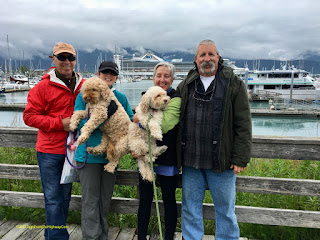 Below is a view of our spots from the water.
We are the left arrow and E&P the right arrow. 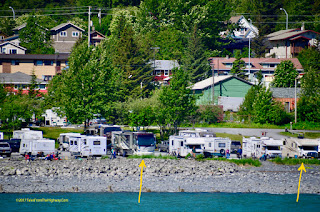 Seward is a favorite stop on the cruise boat circuit and one came and left all
but one of the days that we were there.

Besides the interesting ship traffic...
the view of the scenery out the front window is pretty good too! 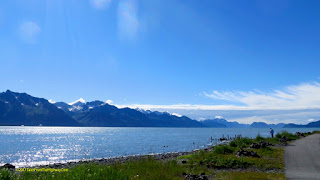 A great walking path runs along the whole waterfront and everyone is out to
enjoy the weather, long days, and great scenery.

Meanwhile on the docks... 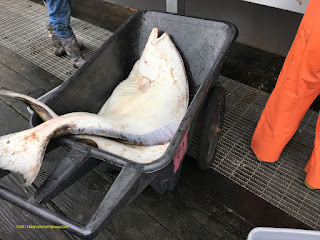 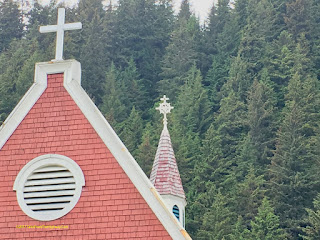 We took a nice 7mile stroll up the coastline to Lowell Point.
We passed by waterfalls and crossed streams. 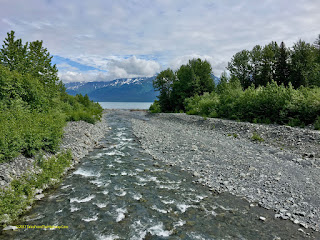 Looking back towards Seward on the way to Lowell Point. 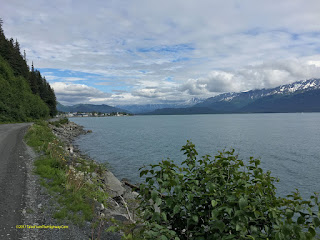 Picking our weather carefully and checking the cruise ship schedules,
we determined that the optimum day for a wildlife cruise should be Saturday,
so we booked a 6 hr cruise of Kenai Fjords National Park on Major Marine.

The Map of our cruise is below with notations of where and what wildlife
was spotted along the way. 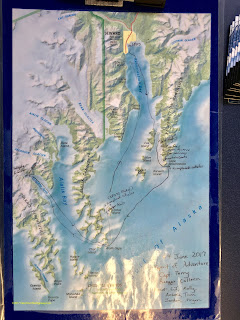 This was our third trip with Major Marine and just like the last two, we were
very happy with every aspect of their service.

A National Park Ranger was on board to spot wildlife and narrate the trip.

A Bald Eagle perched at the top of the tree. 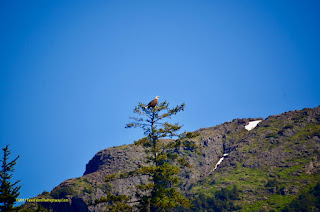 The seabird population was massive!
Below is a "matt" of Common Mures. 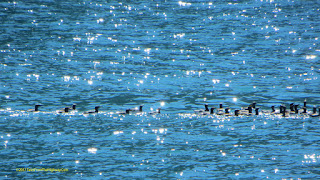 A Kittiwake Rookery.  The Kittwake is a type of gull found in the
Northern Pacific, Atlantic, and Arctic Oceans. 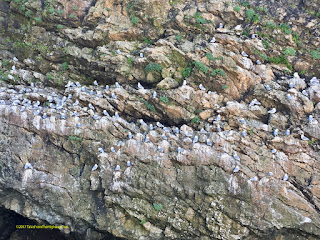 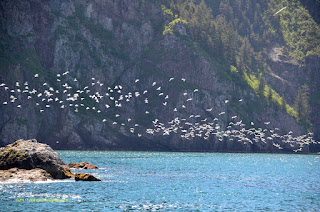 Of course we saw lots of Sea Otters on the cruise and from the shore.

We passed a group of Stellar Sea Lions who had hauled out onto the rocks.

Stellar Sea Lions are a threatened species who range from the California Coast,
north along the Alaska coast and west to Russian Coast and northern Japan.

Some harbor seals were also hauled out on rocks on one of the islands.
They prefer islands due to less chance of land predators sneaking up on them.

We also saw seals floating about on some of the small icebergs that had calved off
of the glaciers. 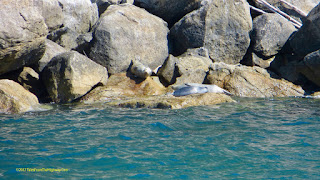 Below, notice the "Kid" (young goat) in the middle.

More wildlife of an unidentified kind. 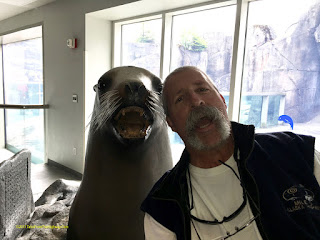 Of course the highlight of every wildlife cruise has to be the whales.

We came across a pod of 4 Humpback Whales feeding on bait balls...
Bait Balls are tightly packed balls of bait fish swimming together as a defense. 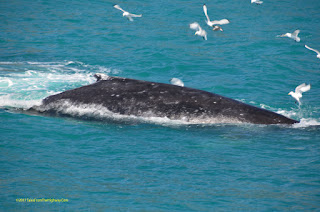 The Humpbacks would come up under the bait balls, mouth open, and try to swallow
as many as they can in one lunge to the surface.

We saw one Humpback break the surface mouth open but did not get the picture as
it happened all of a sudden.

The water has the green color due to the bloom of Plankton that takes place during
the summer with the long daylight hours.

The Humpbacks migrate north to feed on the plankton.

The sequence below is of a Humpback who came to the surface, exhaled,
and then dove deep to feed. 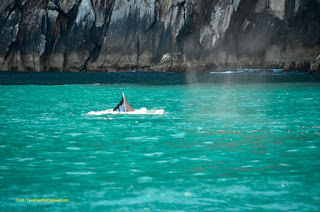 The fluke begins to exit the water.... 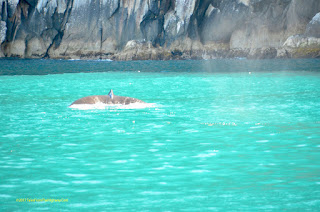 And she flukes!
(photo courtesy of Eric... mine was blurry)

And down she goes. 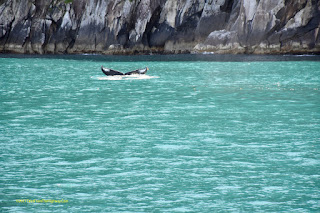 It wasn't all about the wildlife however...

We cruised out into the Gulf of Alaska and up into Holgate Arm to
visit the Holgate Glacier.

We got up close and personal. 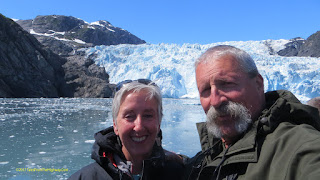 I caught a shot of the glacier calving. 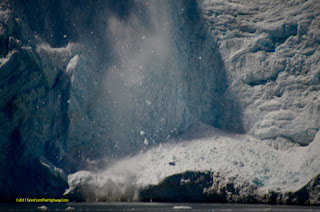 Just like ice in your freezer - all of the hundreds of pieces of Glacial Ice contain air pockets.

Unlike your ice cubes however, the glacial ice has been under extreme pressure since it
may have been under hundreds or thousands of feet of ice.   So the air inside the ice is
under pressure and when the ice melts in the sea, it releases that ice in small "explosions"

This sea sounds like a giant bowl of rice crispies.
Snap, Crackle, Pop, go the growlers.

Below is a far off view of Bear Glacier.
Bear Glacier runs about 12 miles from the sea to the Harding Icefield. 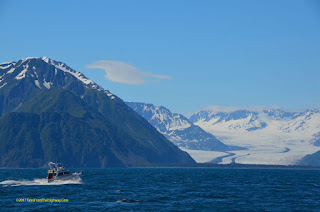 Needless to say - you can tell from the pictures that we had a perfect day to view
some really beautiful and awe inspiring scenery!

In addition the the wildlife and the glaciers...  there is the mountains, the sky, and the sea.


A sailboat heads out to sea. 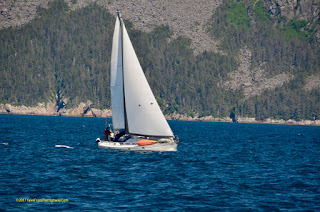 And now we sail away as well.

Next stop Williwaw Campground and then up to Denali.