We have just concluded a fantastic 3 week visit with our good friends
Eric & Pat who flew into Anchorage from Pittsburg and rented a Class C for 3 weeks.

Our travels with them took us from Anchorage to Seward (covered previously) then
to Homer, Soldotna, Whittier, then into the interior and north to Denali National Park
and eventually to Fairbanks where we are now and from where they headed back
to Anchorage this morning.

Our travel map is below.
(remember to click on pictures to enlarge them) 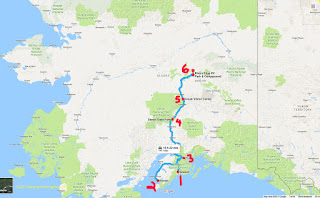 Enroute from Seward to Homer we passed thru Moose Pass and stopped
at Upper Trail Lake to enjoy the reflections of the mountains in the calm lake waters.

Our destination was the Baycrest RV Park just north of Homer on the Sterling Highway.
The view here over the Cook Inlet is fantastic however this place has gone downhill in
the past few years with the change in ownership.
Next time we'll stay on the Homer Spit.

The Homer Boat Harbor.
The Holland America Cruise Ship Amsterdam is in the background. 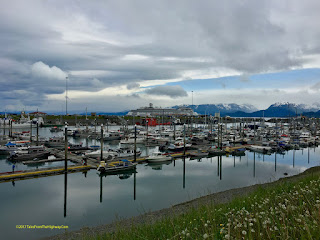 On the Homer Spit there are several places to stay.
Below is a site at the Heritage RV Park, with Full Hookups

Mariner Park - offers boondocking on the spit for $20/night.
It can get crowded and the generators can be annoying but the location is convenient and
the view is great.

In Homer is the Pratt Museum.
It is a real gem and a very worthwhile visit.

Outside of the Museum is an old Homestead Cabin.


A homesteader was here the day we visited and answered our questions and told us tales
about the early settlers life in Homer. 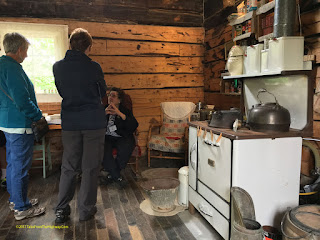 After a couple of days we headed north on the Kenai to Soldotna but first made a side
trip on the way to visit the Russian Orthodox Church in Ninilchik.
It is located in a beautiful setting on the cliffs over Cook Inlet.
The long summer days allowed the wildflowers to grow large and numerous.

Heading up to the church on the dirt road we spotted a Moose in the brush but lost sight.
Coming back old Eagle Eye Eric spotted her again and we had the rare treat of seeing her
up close with a pair of calves

After settling into our home for the night in Soldotna, we headed over to Kenai
to visit the Russian Orthodox Church there.
The parish was established in 1791 and the church is on the
National Historic Register.

Inside there are no seats.
Speaking with the Parish Priest - he said it is because you stand before god. 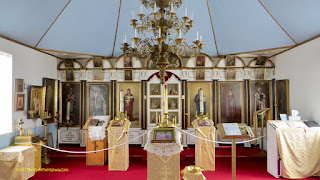 Kate & Pat had a long discussion with the Priest about the R.O. faith and the differences
between it and the Roman Catholic faith. 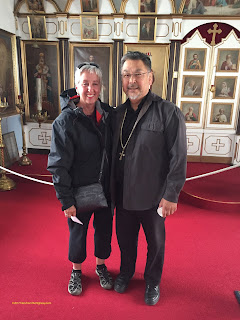 Across the street is the The Chapel of St. Nicholas.
The chapel was built as a tribute to Igumen (Abbot) Nikolai, first missionary in the Kenai area. 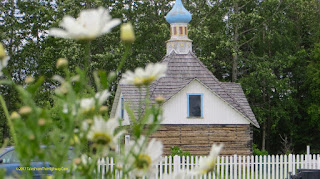 After visiting "The Moose is Loose" Bakery in Soldotna, and getting a good nights sleep,
we headed 2hrs to the Williwaw National Forest Campground in Girdwood, Alaska
near Whittier.

While in Williwaw a jogger was killed by a Black Bear on a trail a few miles away.

Williwaw is of course dry camping.
1/2 the sites are First Come, and 1/2 are reservable.
If you get here on a weekday there is no problem getting in.
Weekends however the place fills up regardless of weather.
Alaskans only get so many summer weekends, and rain will not keep them inside.

From Williwaw its a short drive thru the combined train/auto tunnel to Whittier.

There is not much in Whittier other than a ferry terminal, some shops, a harbor,
and tour boat operators so a quick visit is sufficient.

After 2 nights in Williwaw we headed north to the interior.
Driving along Turnagain Arm the weather started to clear and the snow capped peaks
ont the other side of the Cook Inlet came into view. 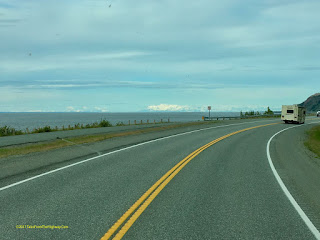 After re-provisioning at Fred Meyers in Wasilla, we headed north on the Parks Highway
and soon Denali - the Great One - came into view. 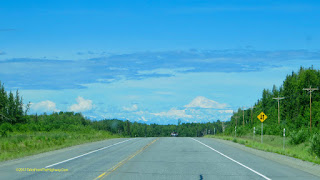 Our stop for the night was the K’esugi Ken Campground in Denali State Park.
The campground is brand-new.  Only open since May, it has electrical hookups and
great views of Denali (weather permitting) from the numerous hiking trails in the park.

Since it was Saturday and the park is First come First Serve - it was full.
The host however,  allowed us to boondock in the large visitor center parking lot which
was quite nice and only two other rigs were there along with us.

We took a hike on a loop trail that left just a few feet from our site. 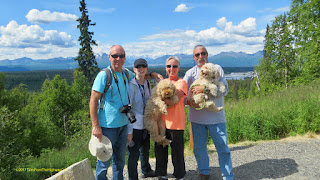 The view from the trail over Susnita River to Denali (hidden in the clouds) and the
Alaska Range.

After a brief stay in Denali State Park we continued 120 miles north on the Park Hwy
to the Riley Creek Campground in Denali National Park.
We had made our reservations here over 6 months ago for 2 nights at Riley Creek
and then 4 nights further in the Park at Teklanika Campground.

We hiked from the campground to the Visitor Center - a few miles round trip,
and then headed to the Denali National Park Sled Dog Kennels.

Denali NP breeds and maintains a pack of about 30 sled dogs which are used in winter
to patrol the park which is over 9,400 square miles in size. 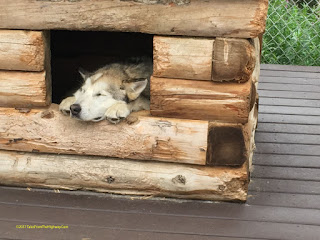 At one point the rangers do a demonstration of a sled dog team pulling a sled (on wheels).
At the end of the demonstration, the dogs run one-by-one back to their kennels.
(See dark dog running in the foreground)

The other dogs get so excited with the activity that some actually jump for joy.
(see dog jumping up in the center) 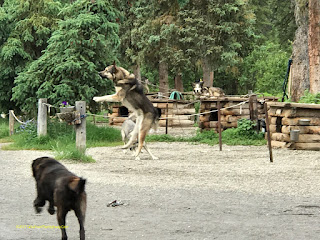 We also took a hike on the Savage River Loop Trail.
Last year a hiker was killed by a Grizzly Bear near here.


At the bridge over the river we posed for a photo op. 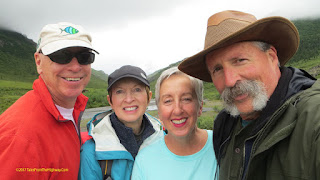 On July 4th we headed 30 miles into the park on the restricted section of the Park Road.
You need to obtain a special permit to travel there and must be going to the Teklanika
Campground for a minimum of 3 nights in order to drive into the park.

You are far from any cell service - yet I knew where to park and still had Dish Satellite
reception ever here - deep inside Denali.

I had the bus decorated for Independence Day.
Of course its boondocking at Teklanika.
There are about 40 dry camping spots.
There are no services of any kind and one water spigot per campground loop
I was the only Bus in the campground - most units were smaller.

The view from our front window.

Going to Tek, you must leave the Towed back outside at the visitor center.
We obtained a "Tek Pass" for the bus system which is the only way (other than feet or bikes)
to travel deeper into the park.

The Tek Pass gives us unlimited bus travel while we are camped at Tek for $34 per pass.


The ride deep into the park takes hours.
To go all the way to the end at Kantishna takes about 10 hrs round trip.

The views along the way make up for the long ride. 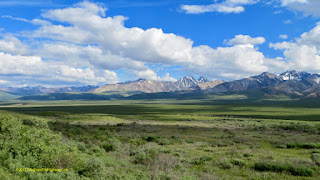 As does the wildlife.
A Caribou rests along side the road. 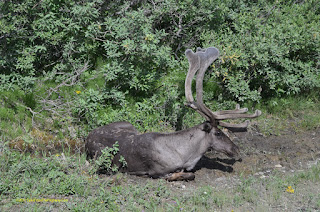 Another Caribou roams the cooler stream bed hoping for some relief from insects. 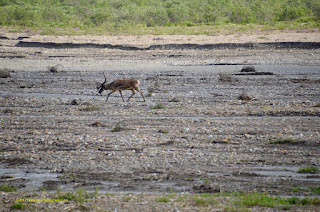 Yet another walks the road.
This one turned around and challenged the bus.
The Caribou won.   We waited till he let us pass. 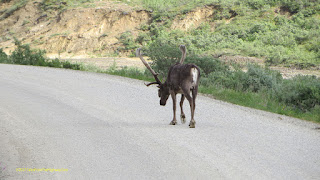 I spotted this Dall Sheep way way up on the mountain.
He was about a mile away!


Of course one of the big attractions are the Bears.
We had some prime sightings over several days.

Twice we found Grizzlies within about 40' or less.


Kate got these cool shots of a Kittiwake in flight


This Kittiwake was just taking off.


Another special bonus was getting to see the mountain for our second trip in a row!
Very few people who come here get to see this much of the mountain.

Beyond the Eilson Visitor center - out about mile 80 or so is Wonder lake.
When conditions are right you can get the reflection of Denali in the still waters.
By the time we got to Wonder lake the mountain had hidden itself in the clouds but we
still got to enjoy the beautiful location and the peace and quite of this remote place.

Finally we got to the end of the road at Kantishna

Heading back to Teklanika, the bus stops for 1/2hr at Eilson Visitor Center.
We decided to walk while the bus held at Eilson.
We told the bus driver that we were going to walk and she picked us up a couple of miles
further east down the road when she caught up to us.

In Teklanika - the Teklanika River runs right behind the campground and its a great
place to just hike along the river bed.

For those of you who know the story of Christopher McCandless...
(Jon Krakauer's book "into the wild)
The Teklanika River was the river that had swollen and prevented him from returning
to civilization - stranding him in the wilderness - until he starved to death.


We attended a couple of Ranger Campfire Program. 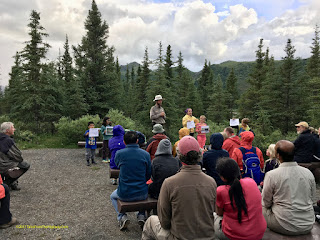 We hiked the Teklanika River and climbed the cliffs. 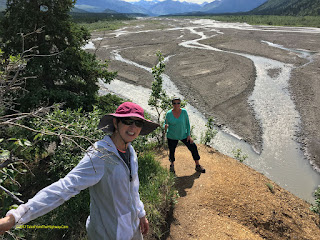 After 4 nights in Tek it was time to move on to Fairbanks as Eric & Pats
time with us was running short and we had one last port of call before it would
be over.

Along the way we passed Skinny Dicks Halfway Inn.


In Fairbanks I took the crew for a quick visit to the Alaska Pipeline. 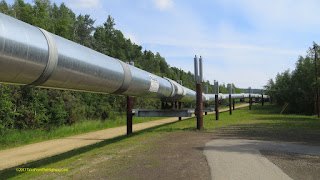 The weather in Fairbanks was a balmy 80°
The interior Alaska is much warmer than the coast in Summer and colder in winter.


We went to the Alaska Salmon Bake at Pioneer Park in Fairbanks.
All you can eat wood fired Salmon, Beer battered Cod, and Prime Rib. 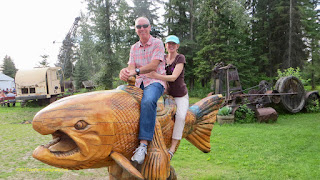 On Sunday we took advantage of the great weather to rent some Kayaks and
spent a leisurely afternoon paddling the Chena River. 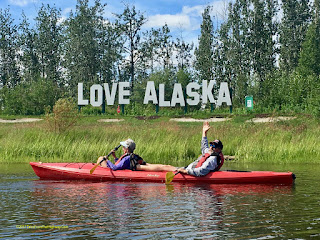 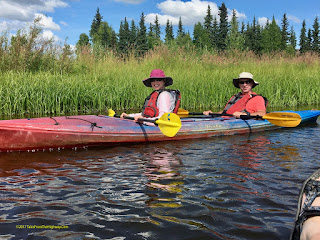 A Mallard and her chicks came by the Kayak to say quack.🦆 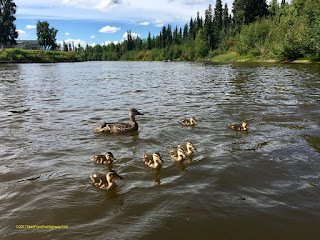 Then as quickly as it began...
It was time for our farewell dinner.
Sunday night Kate made her unbelievably awesome Eggplant Parmigiana.
(The secret is in how I cut the eggplant but don't tell anyone) 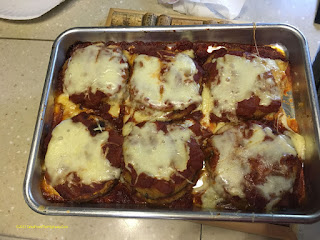 Eric & Pat left this morning to head back to Anchorage and we are back to
being free-range chickens wandering the North Country.

We are going to stay here in Fairbanks for 8 more days and then
we plan to head up the Dalton Highway to the Arctic Ocean on Friday
and return Sunday or Monday.  We will leave the bus here in Fairbanks
and camp in the pickup for the 3 or 4 day trip.

Featured on the show "Ice Road Truckers" and with over 400 miles of dirt road each way,
the Dalton has the longest stretch of highway without any services in North America.
It travels thru the most remote country you can get to without a plane.

The stretch between Coldfoot and Deadhorse is about 250 miles with no towns, gas stations etc.
At the north end is Prudhoe Bay, the North Slope Oil fields.
We'll be way above the Arctic Circle, and the sun wont set.

I hope to dip my feet into the Arctic Ocean and have scheduled a tour operator to take us
the final 8 miles to the coast since you are not allowed to go unescorted due to
the security in place.

No cell service for 400 miles.
It promises to be an experience.
Stay tuned for this one.
Posted by GregK at 9:53 PM