Yesterday we said Aufwiedersehen Frankfurt,  jumped into the Benz...
(I  just love saying that)

We burned up the pavement southbound on the Autobahn.
It was pure farfegnugen.

Nuremberg was a special stop for two reasons...
First - The Christmas Market here is the largest in Deutschland.
Second - as a World War II history buff - Nuremberg holds a special place
in the history of the War.

Our first stop - on the way to our hotel was the
Nuremberg Documentation Center.

Nuremberg was the ideological home of the Nazi Party.
It was here that the party created a massive complex in order to stage
their annual rallies to create the myth and lure the citizenry as well as
impress them with their overall power.

The Congress Hall - pictured below is one of the few relics still standing
that was built by the National Socialists.

It was patterned after the coliseum of Rome but was never finished
as the war started before completion. 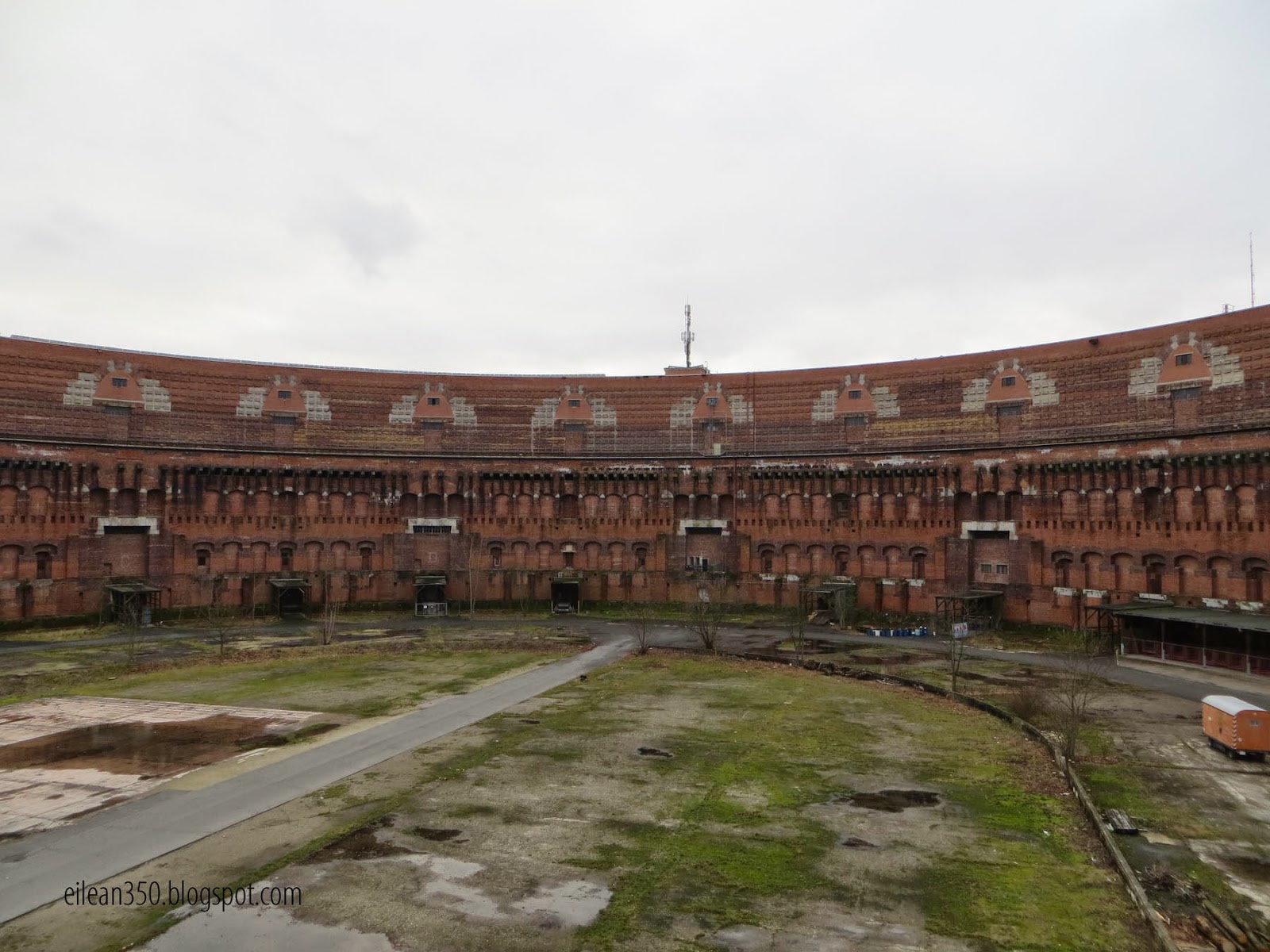 This is a view of what the above picture would have looked like had it been competed. 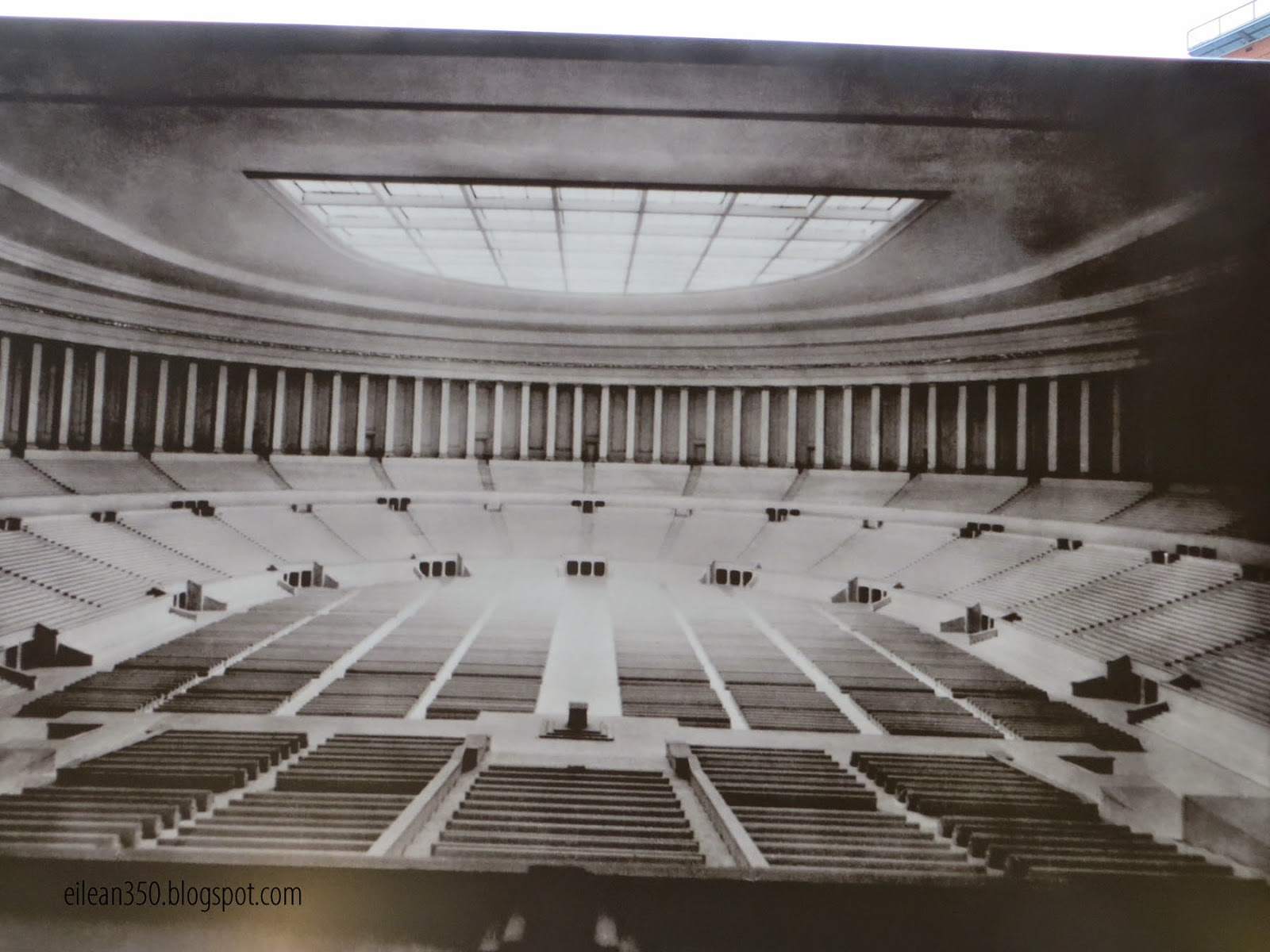 The documentation center exhibits try to explain how the Nazis came to power.
How they first intoxicated, and then enslaved a nation.
It also explains the terrible toll that they extracted on
both the world and the German people.

The picture below was one of the most poignant exhibits.
Named: "The Tracks: The Logistics of Racial Madness"

Funded by Deutsche Bahn - the German Railway System, it purpose is to
acknowledge the enormous part the railways played in the Halocaust.

Without the rails - the death machine would not have run.

On the wall are railway station signs - each of a death camp.
In between the rail ties are cards - each with one persons name...
a person who perished in the camps.

To have one card for every person transported on the death trains,
the exhibit would have to be 37 miles long! 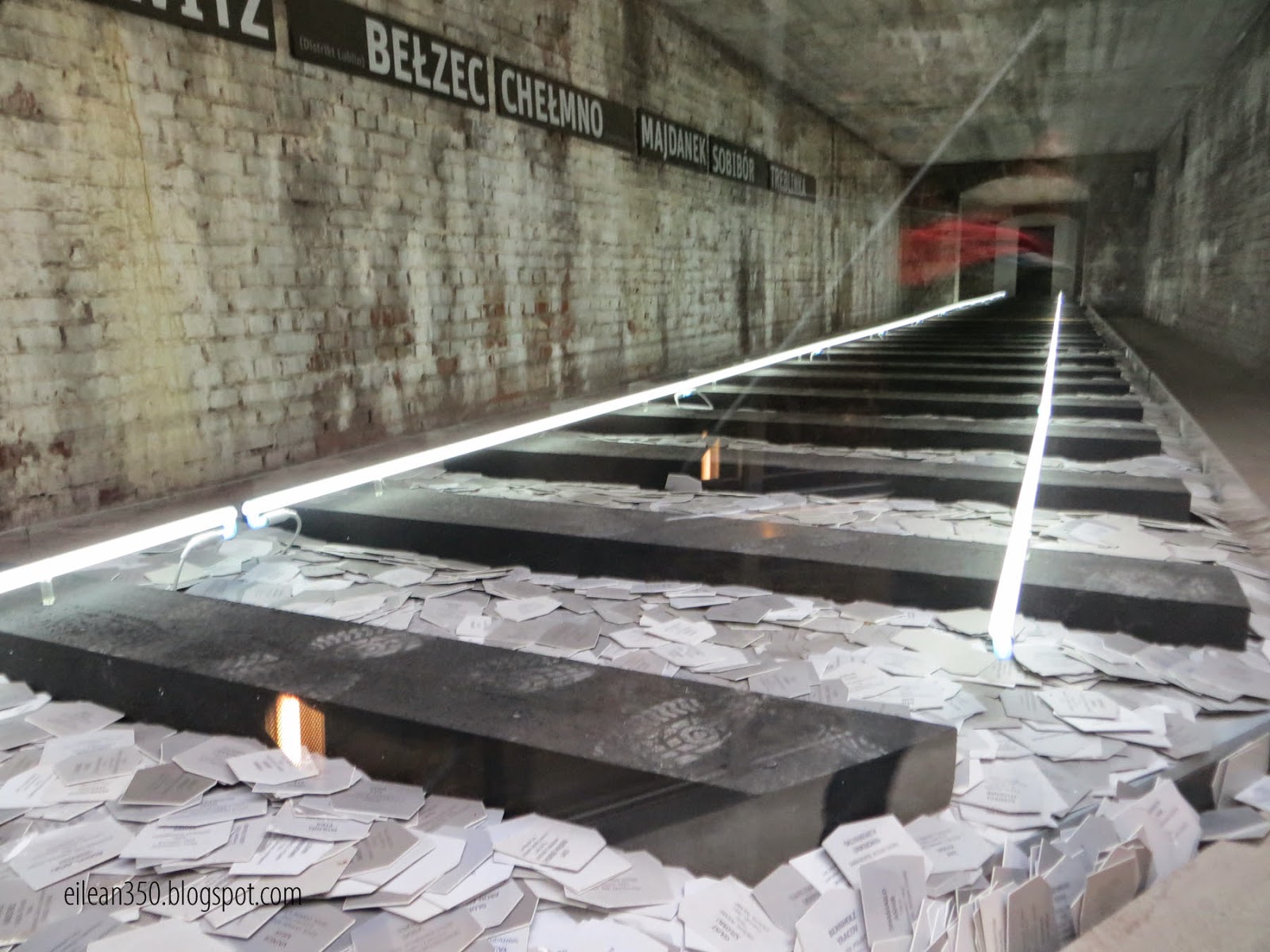 Below are the remains of the parade grounds viewing stand.
Hitler and other party officials would stand and review troops
and make speeches in the center pedestal. 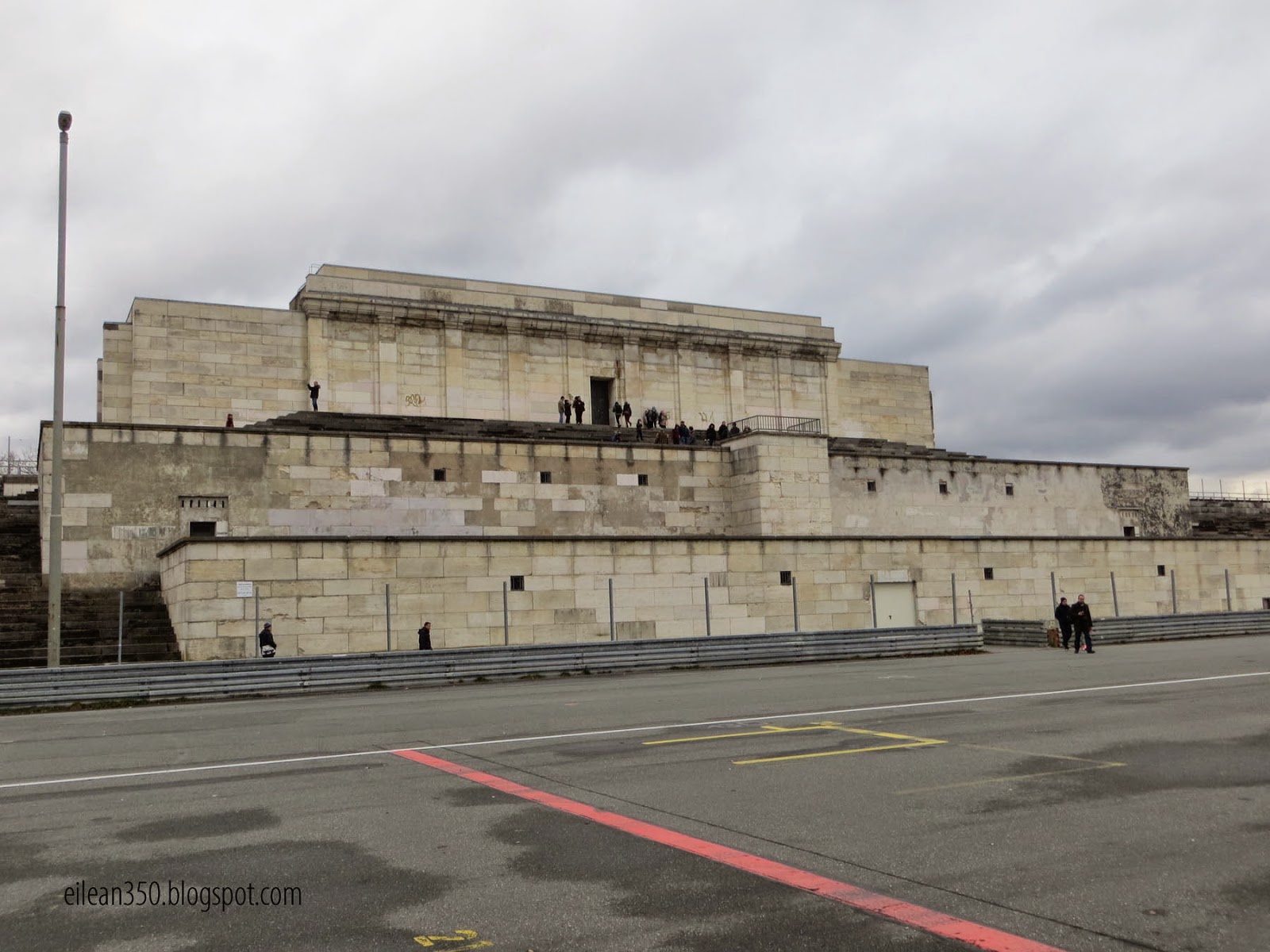 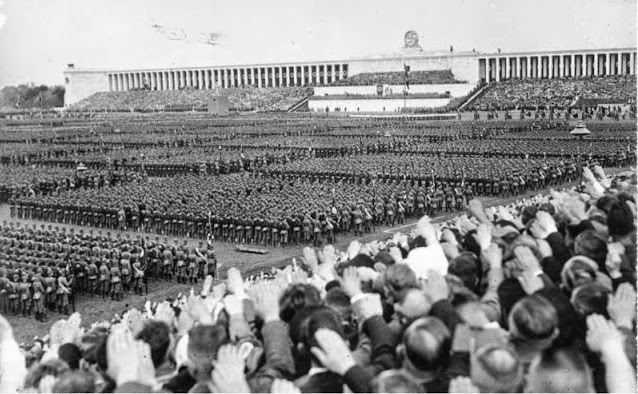 History buffs might recall this photo of the swastika being blow up by US Troops
shortly after liberating Nuremberg. 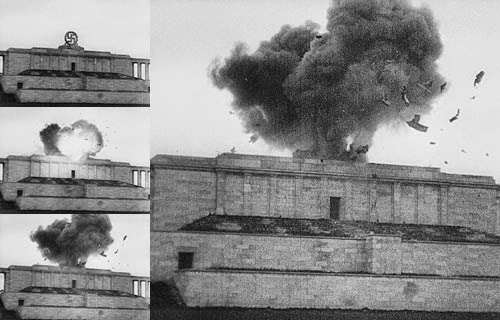 The exhibits did a wonderful job in confronting the past.

The permanent exhibition "Fascination and Terror" looks at the causes,
the context and the consequences of the National Socialist reign of terror.

The Congress Hall today is a wonderful contrast.
On one side is the Documentation Center Museum,
on the other the Nuremberg Symphony.

Now for a lighter subject...

Heading back to the car - our car model - Kate struck a pose. 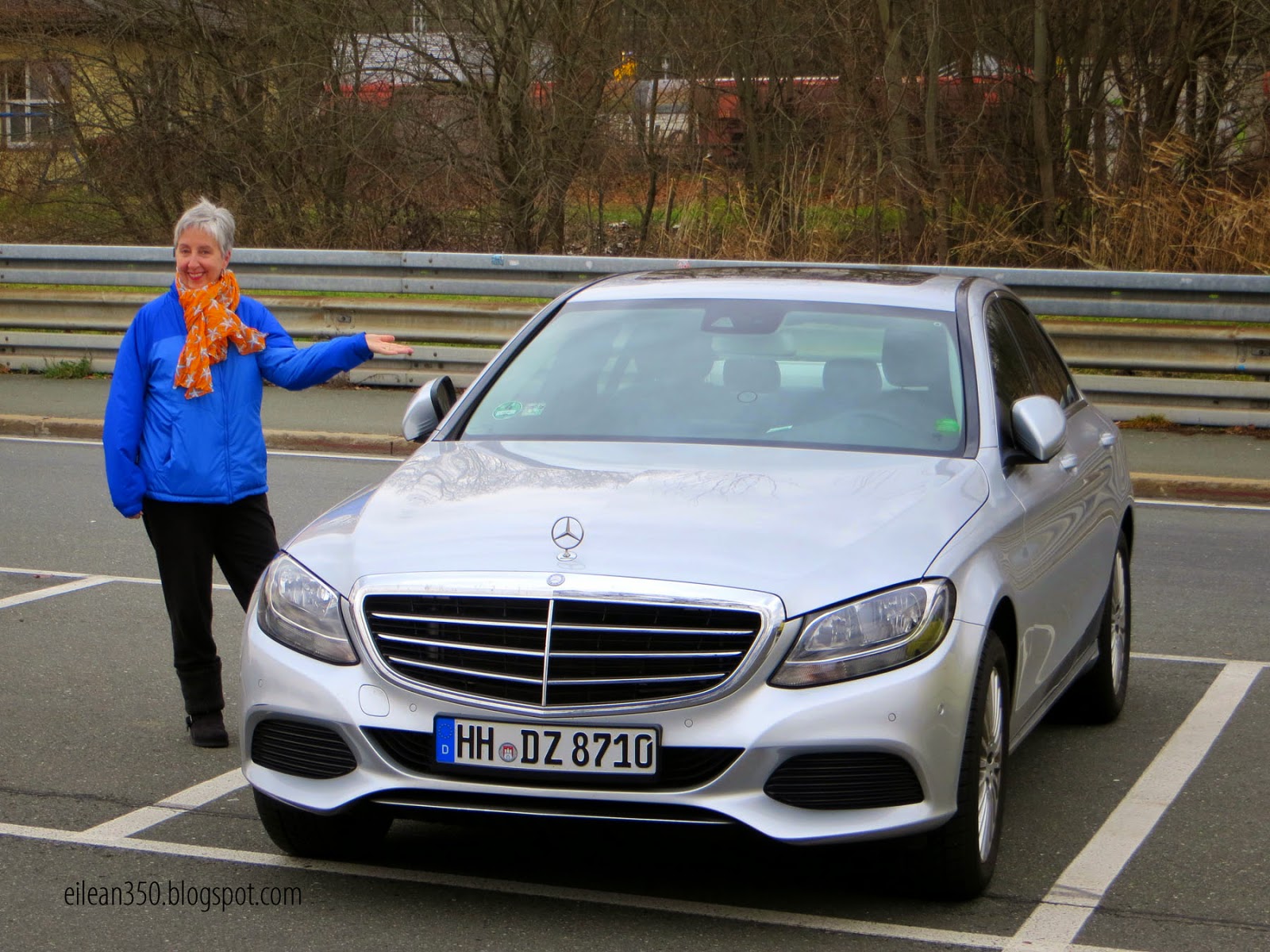 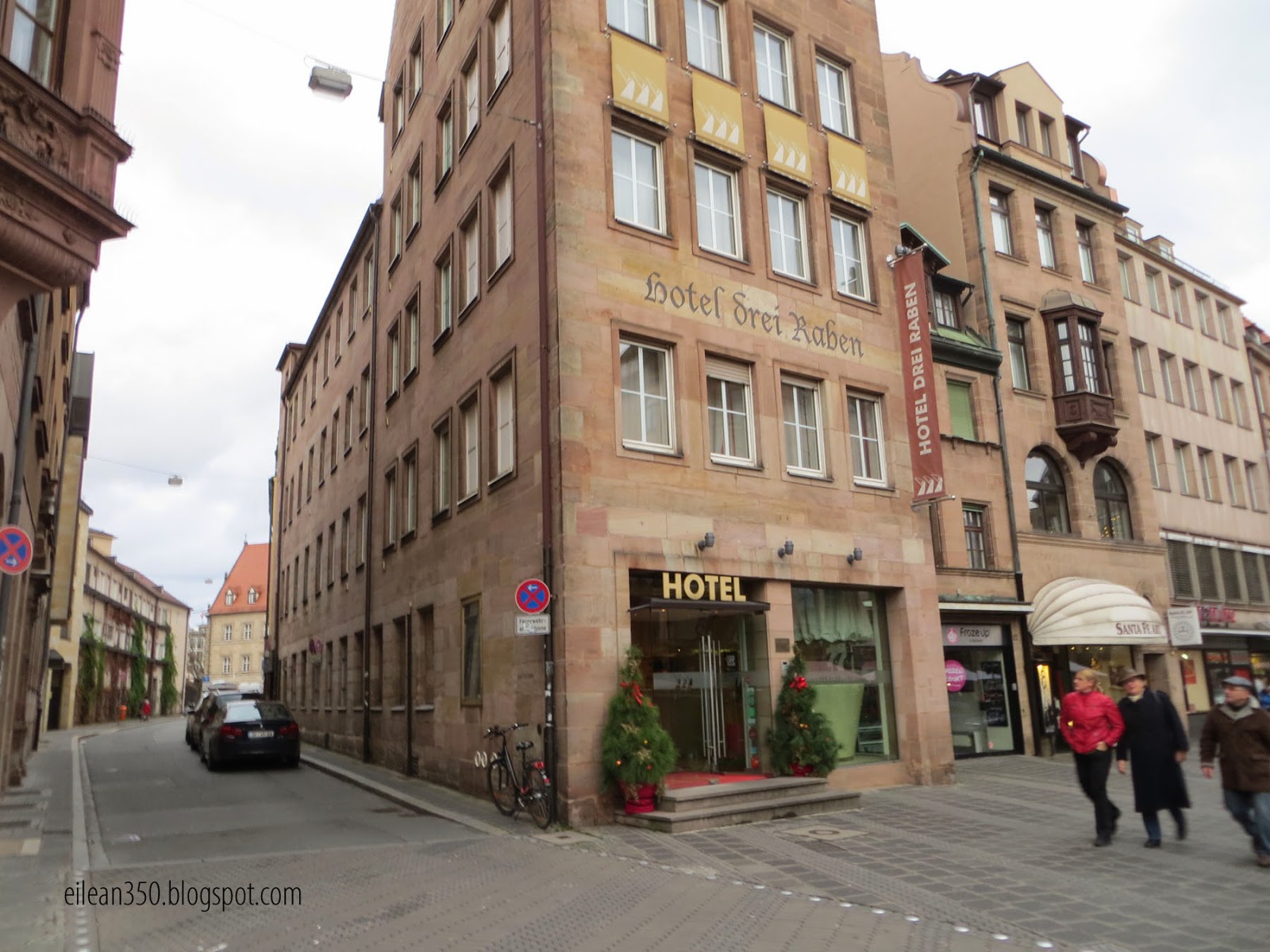 We immediately hit the pavement to immerse ourselves in the Christkindlemarkt.

Along the way.
The dog remained perched while Santa sang and played songs.
Everytime a dog would pass by the dog would bark and sing. 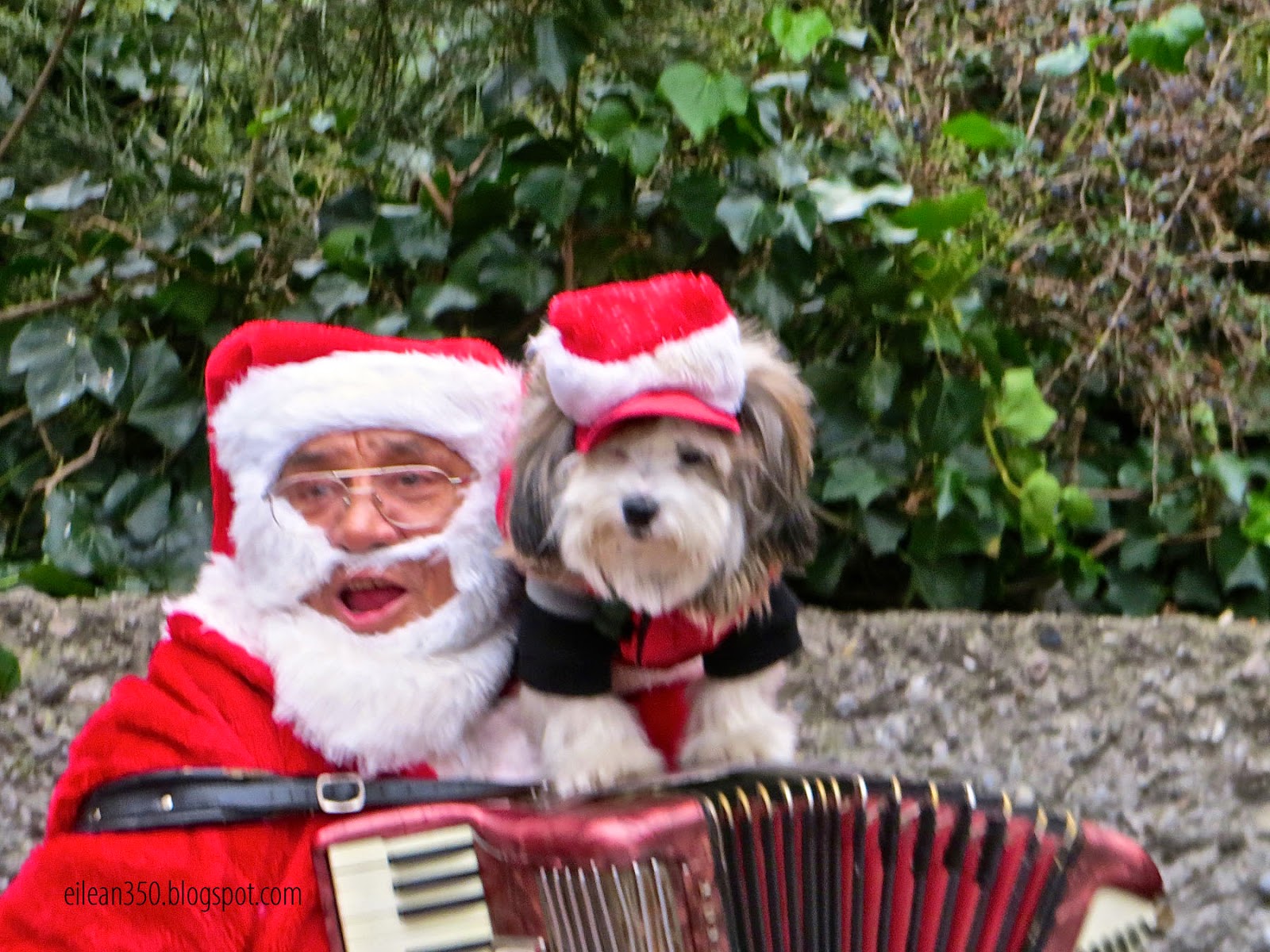 Crossing a bridge over the Pegnitz River in the Altstadt 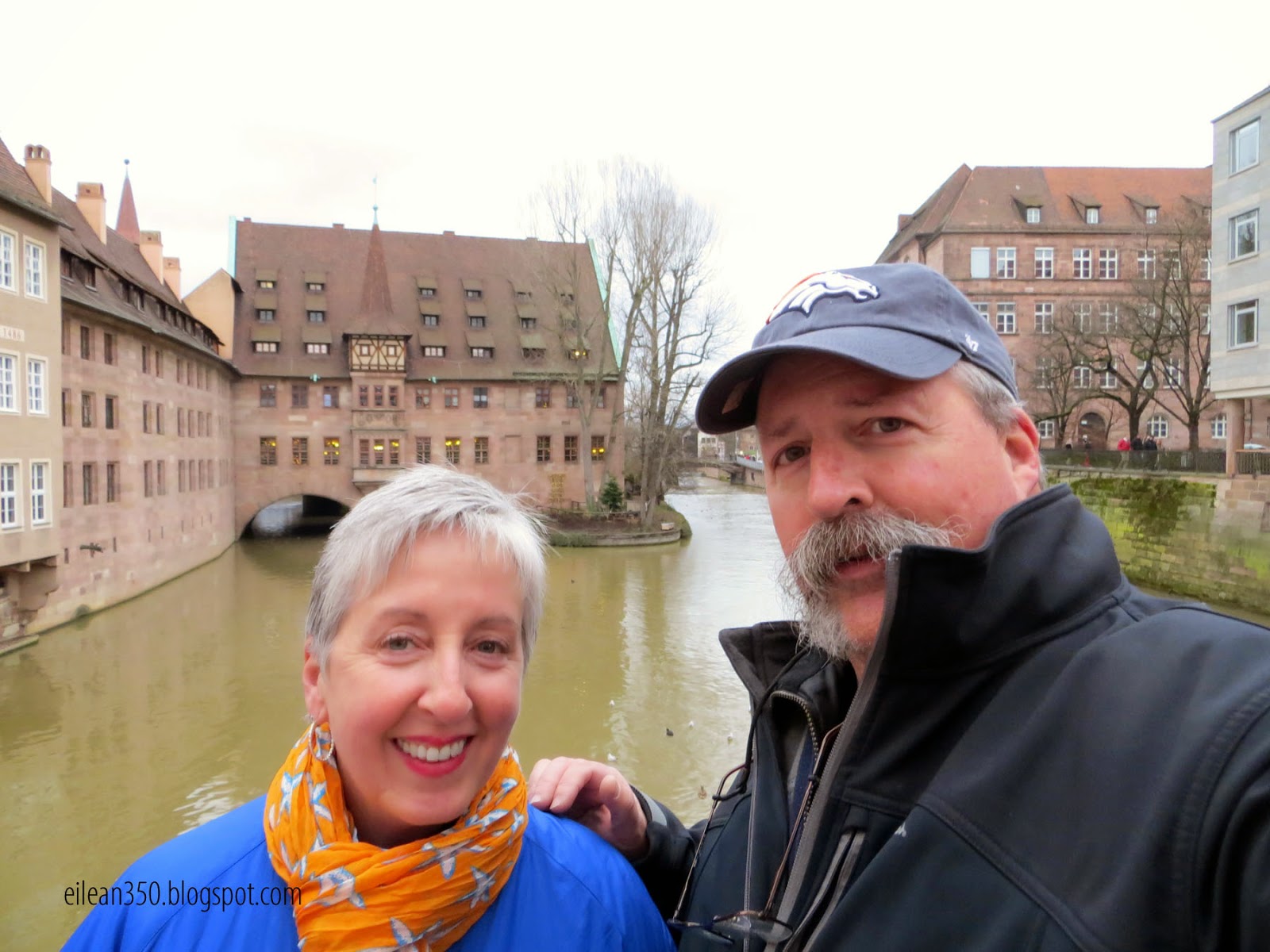 In the center market 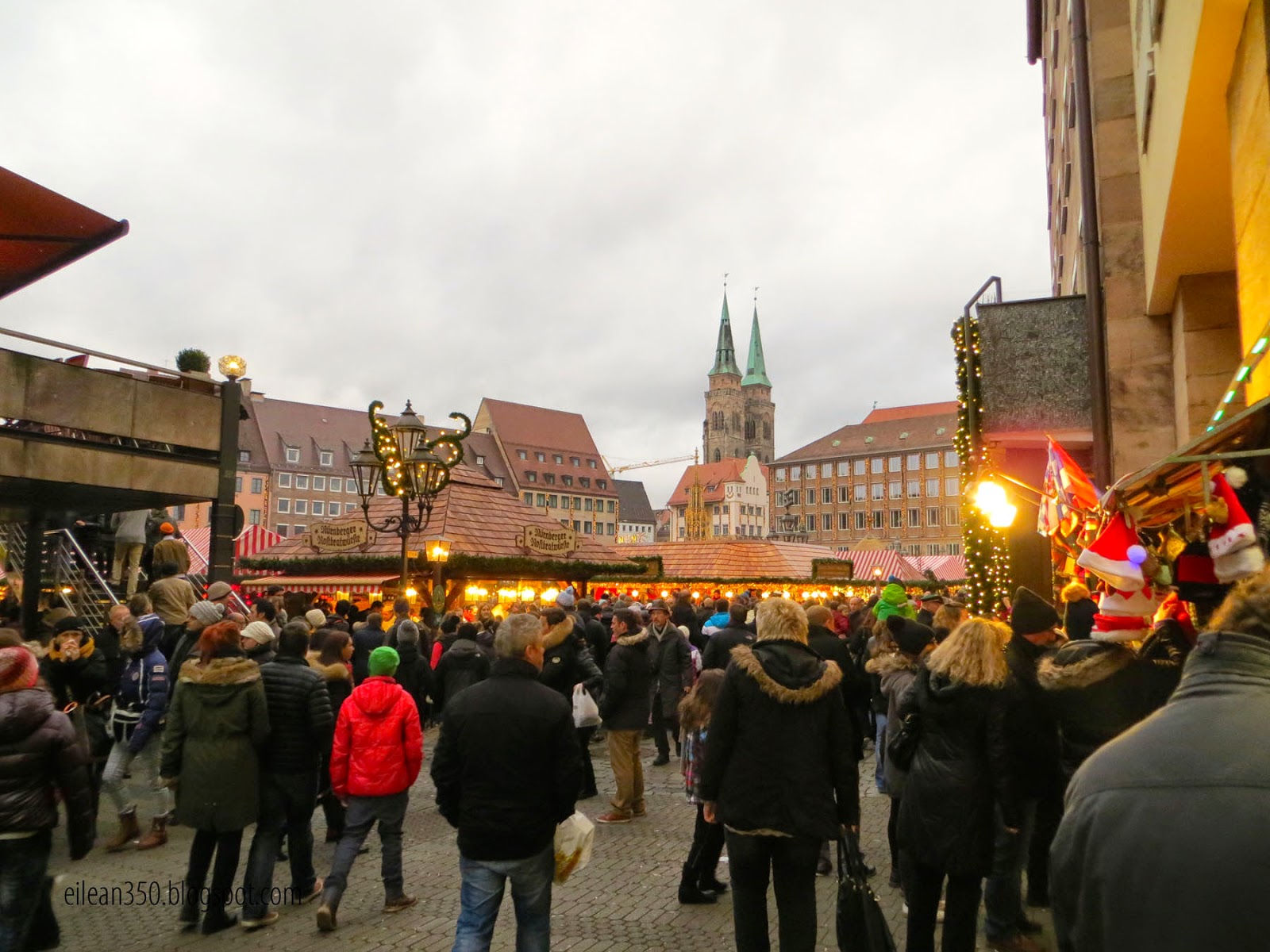 Inside the Frauenkirche (church of our lady)
Remember the Christmas song about "good king Wenceslaus"???
Well he was baptized in here. 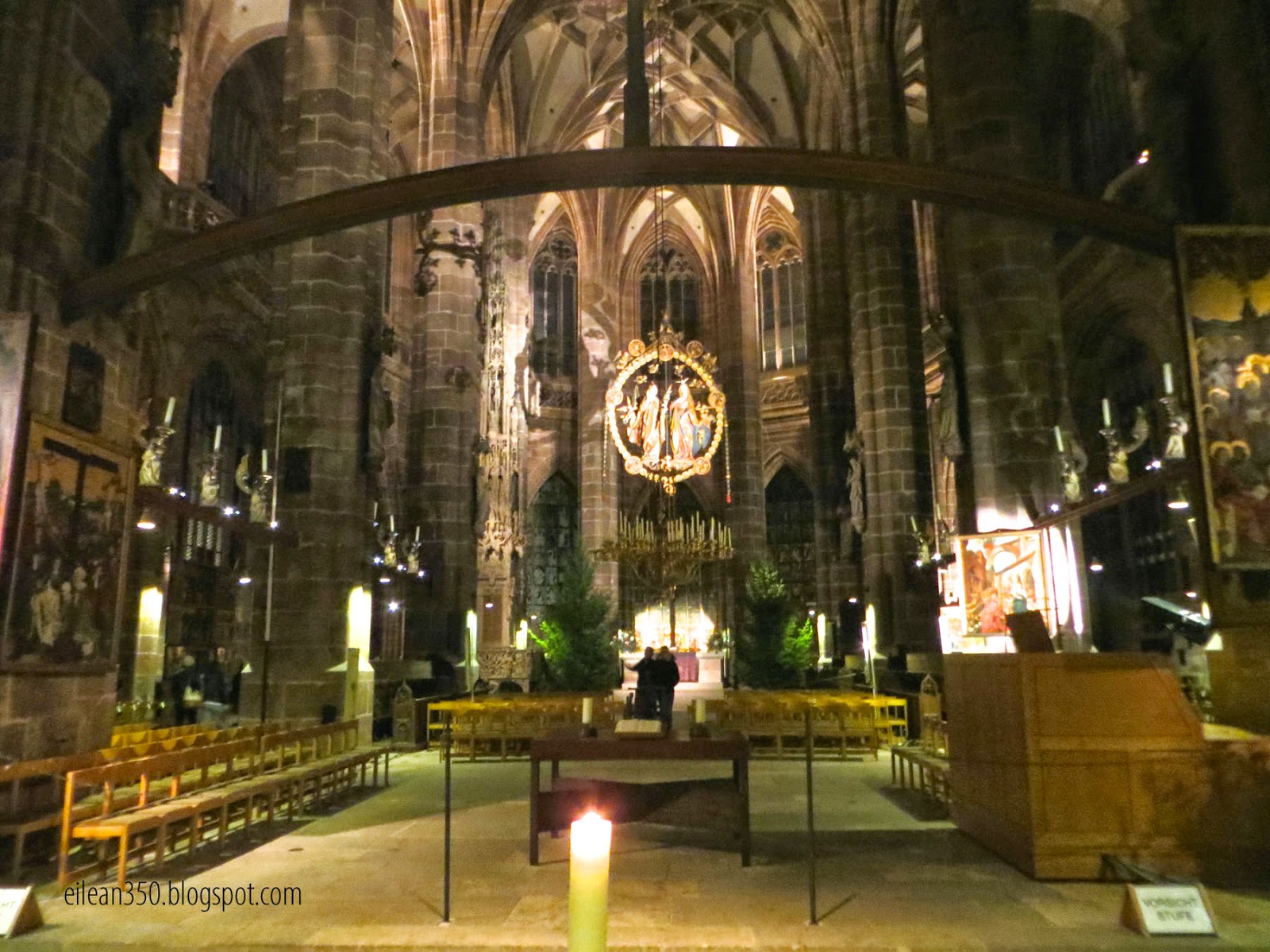 The church casts an impressive backdrop over the market. 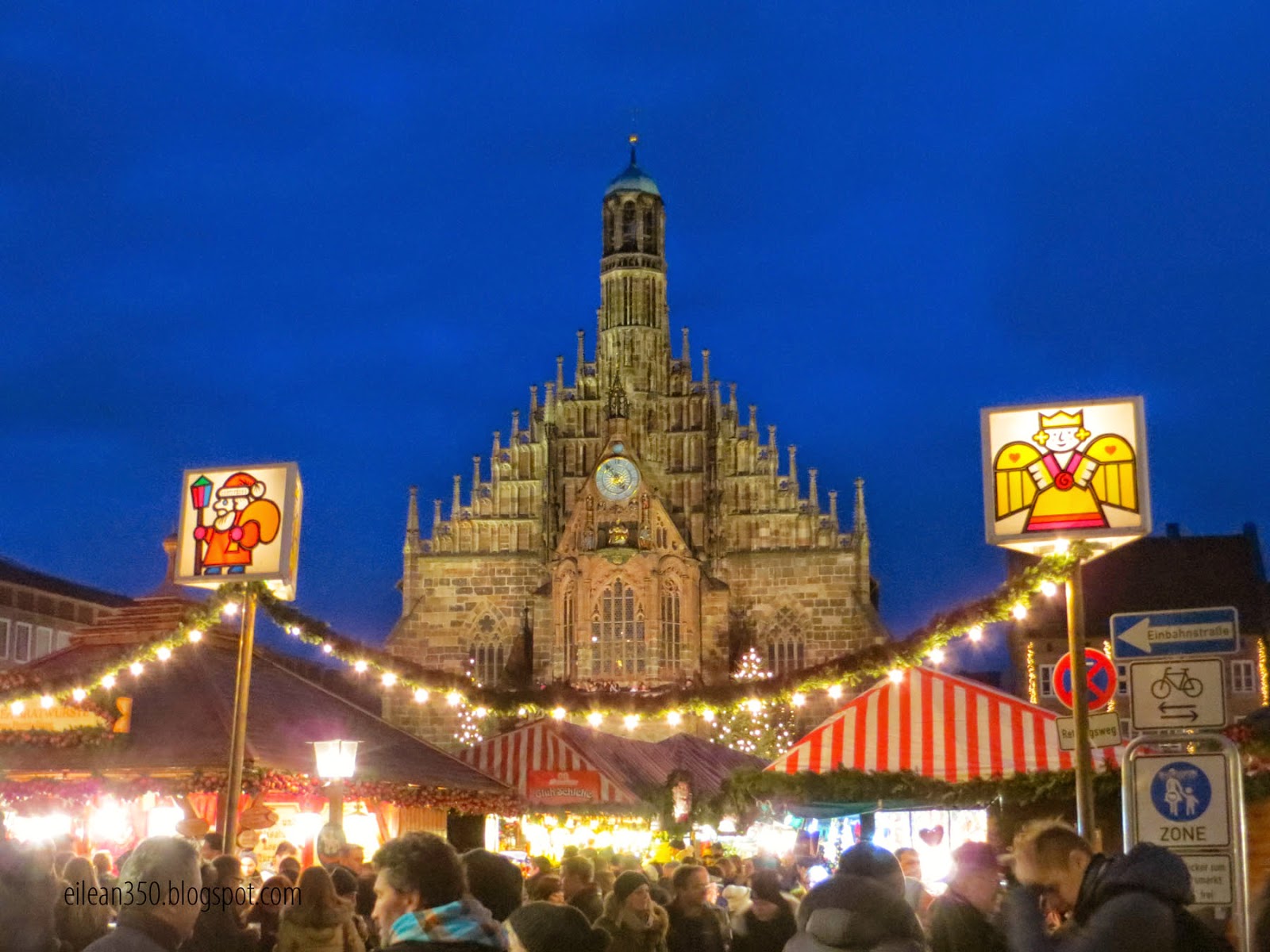 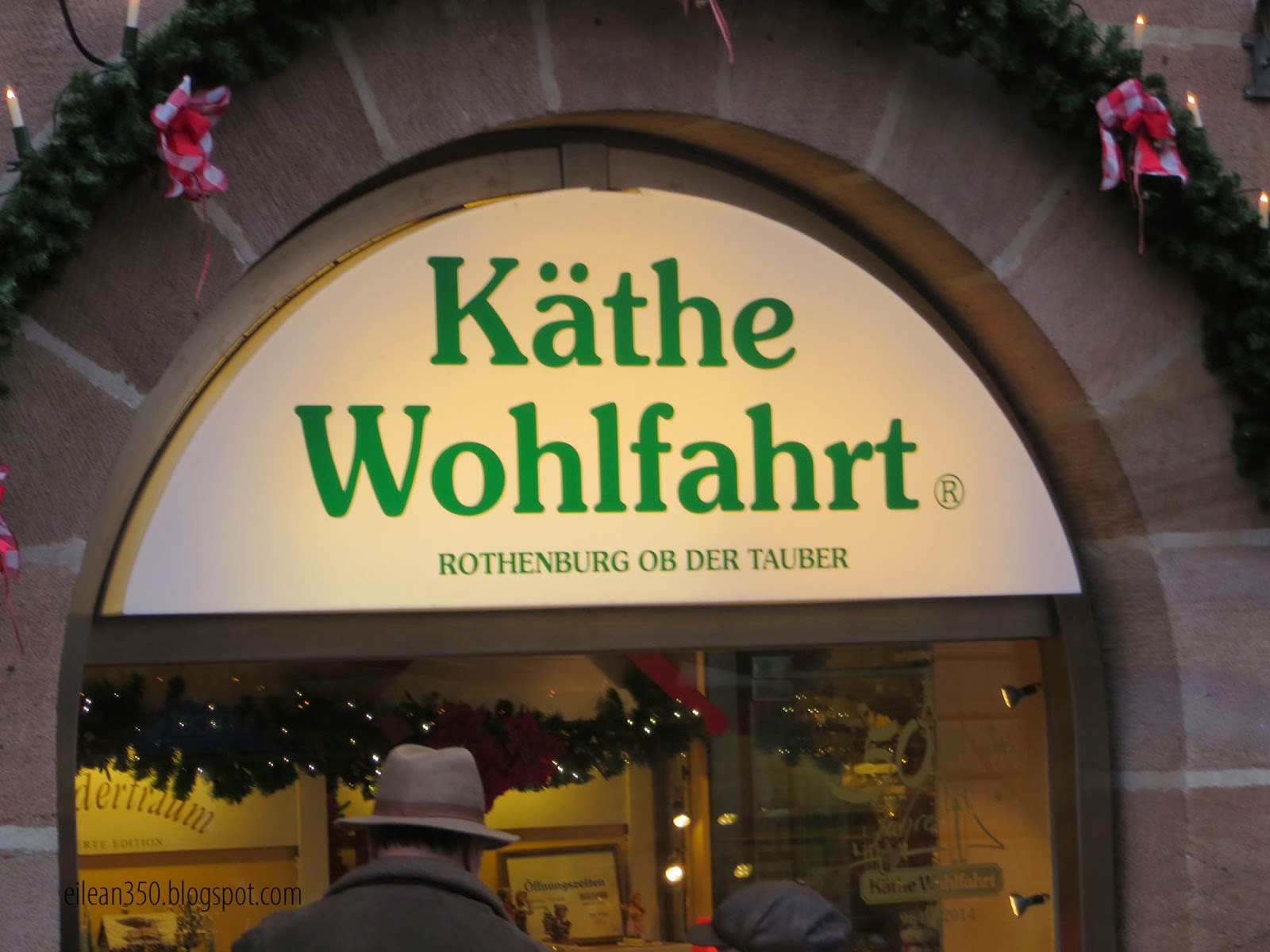 The variety of seasonal foods and sweets in the market is amazing.
The market is huge.  It must be a mile in all directions. 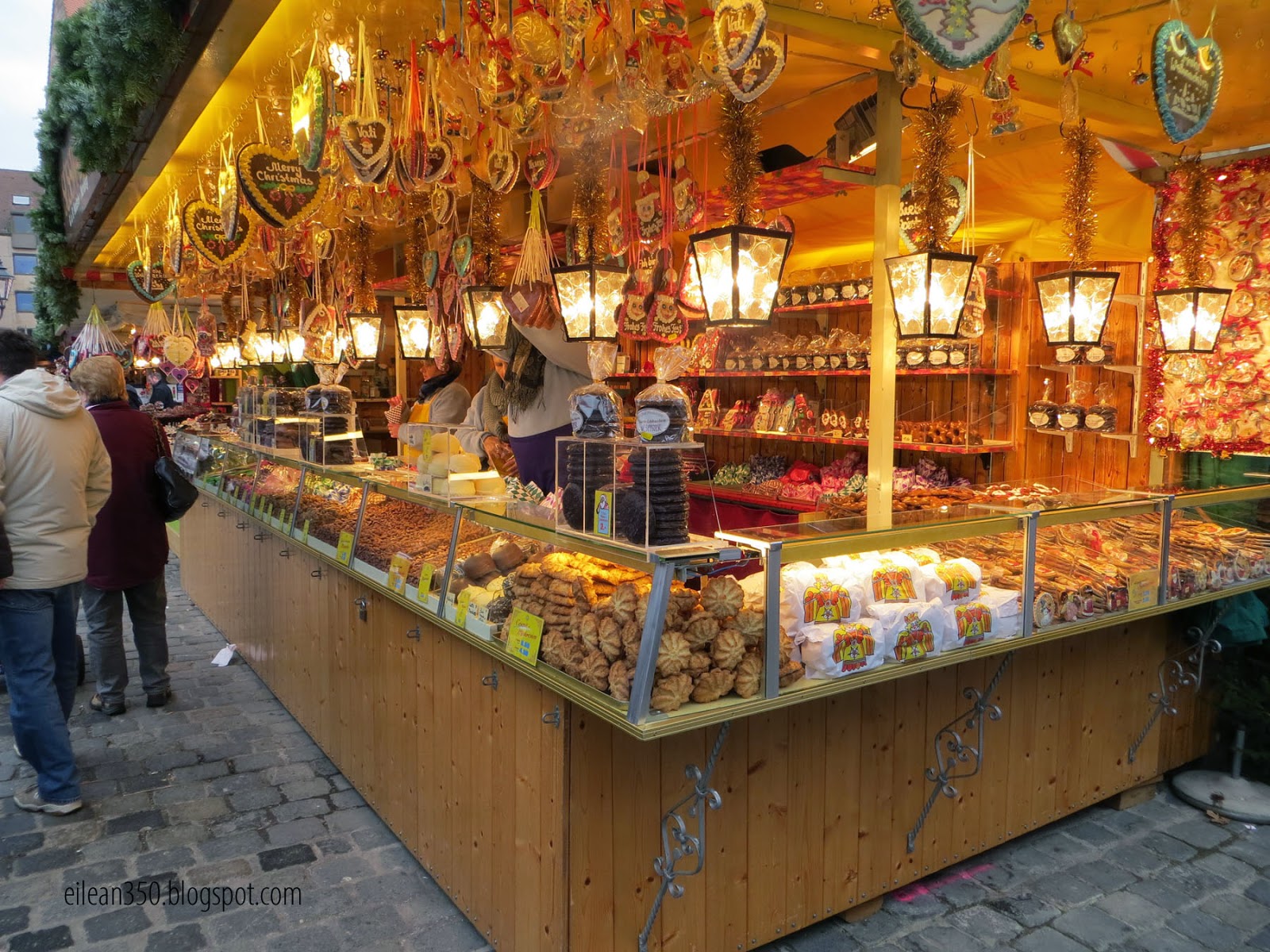 Outside the Frauenkirche.
The each day at 12 noon the figurines put on a display for several minutes
while seven other figures parade around the king. 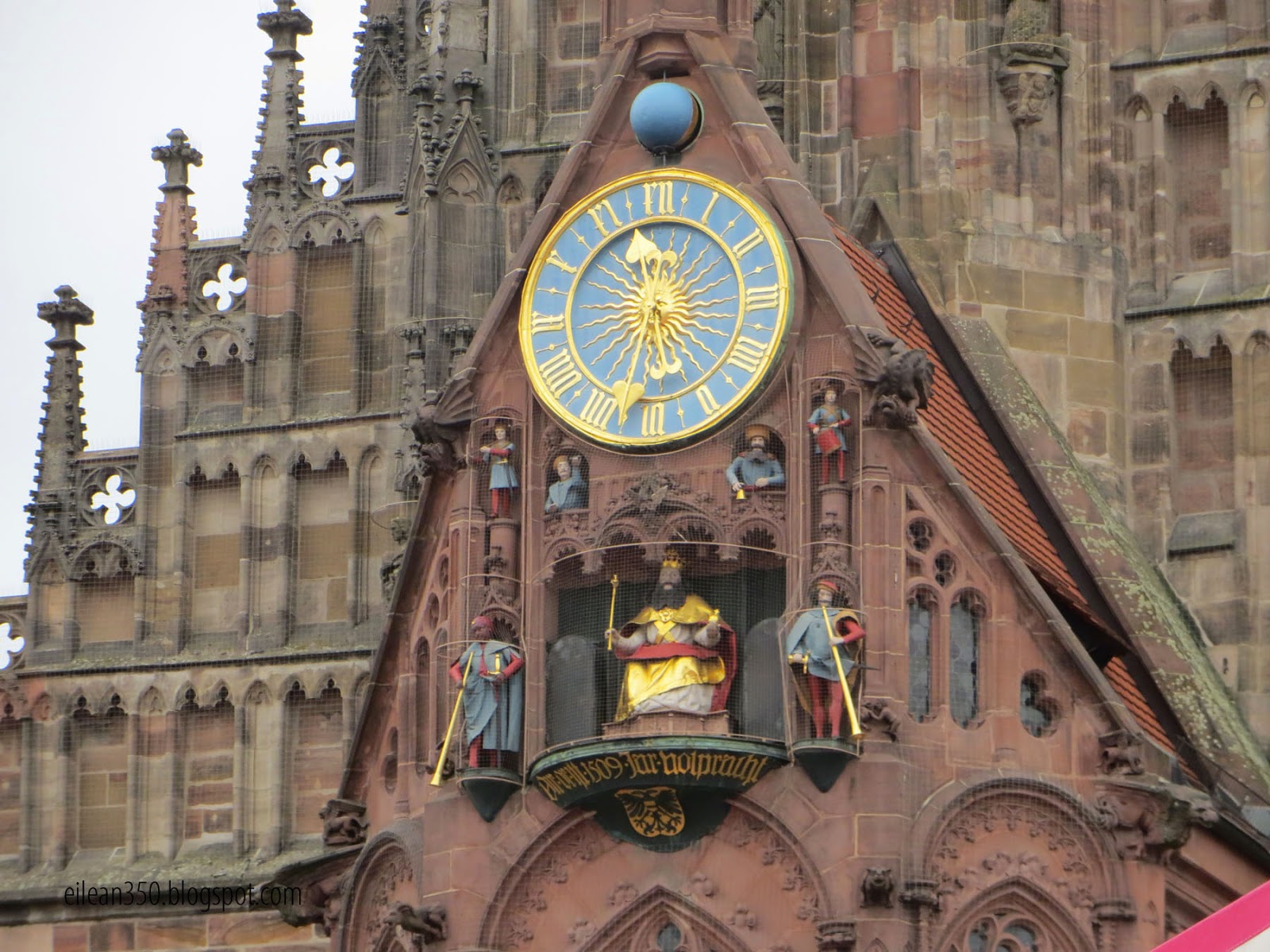 Next it was time to head up the hill to the west end of the Altstadt to
the Castle of Nuremberg.

Looking back towards the market you can see the throngs of people. 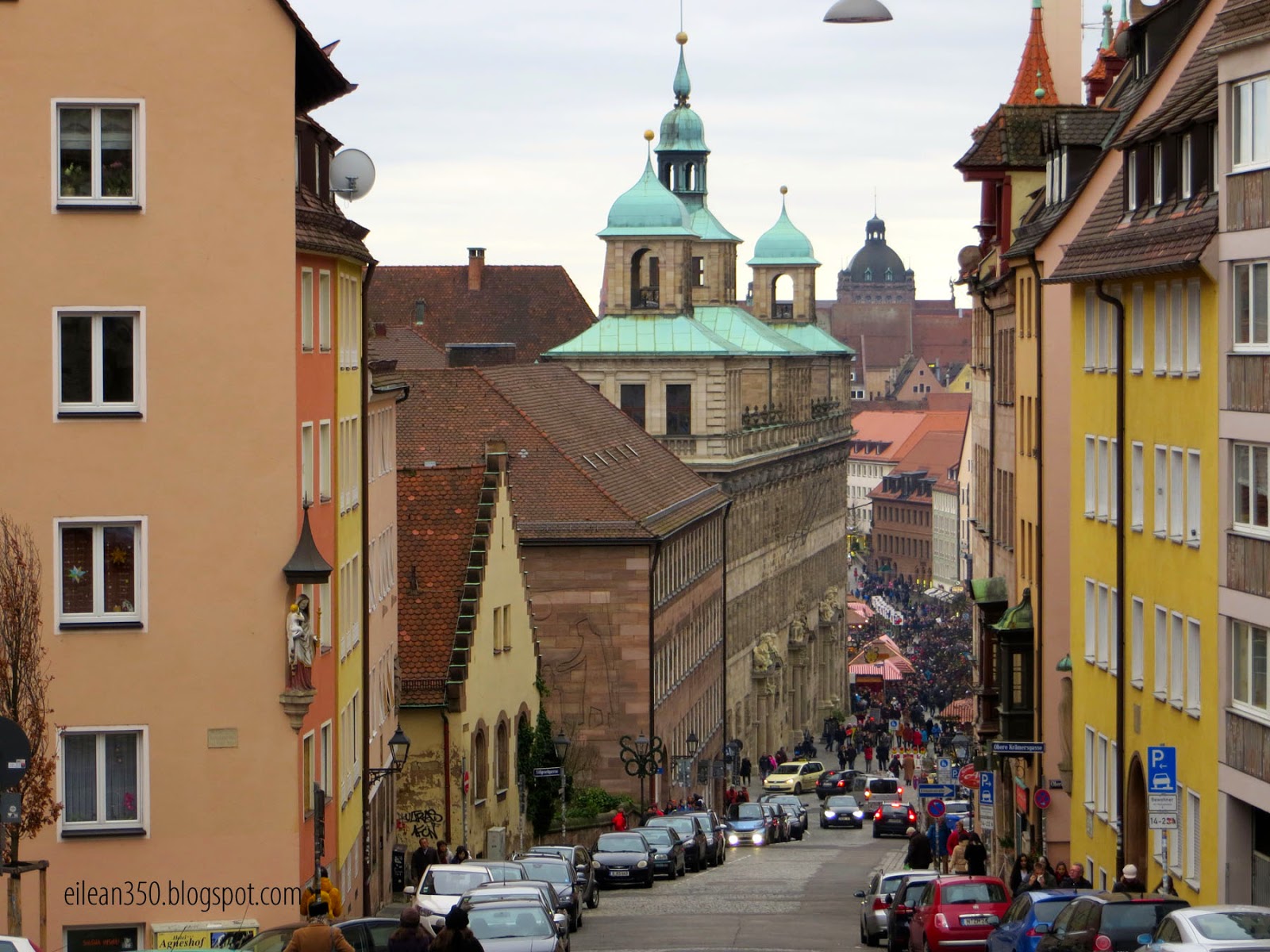 Headed up the hill towards the castle 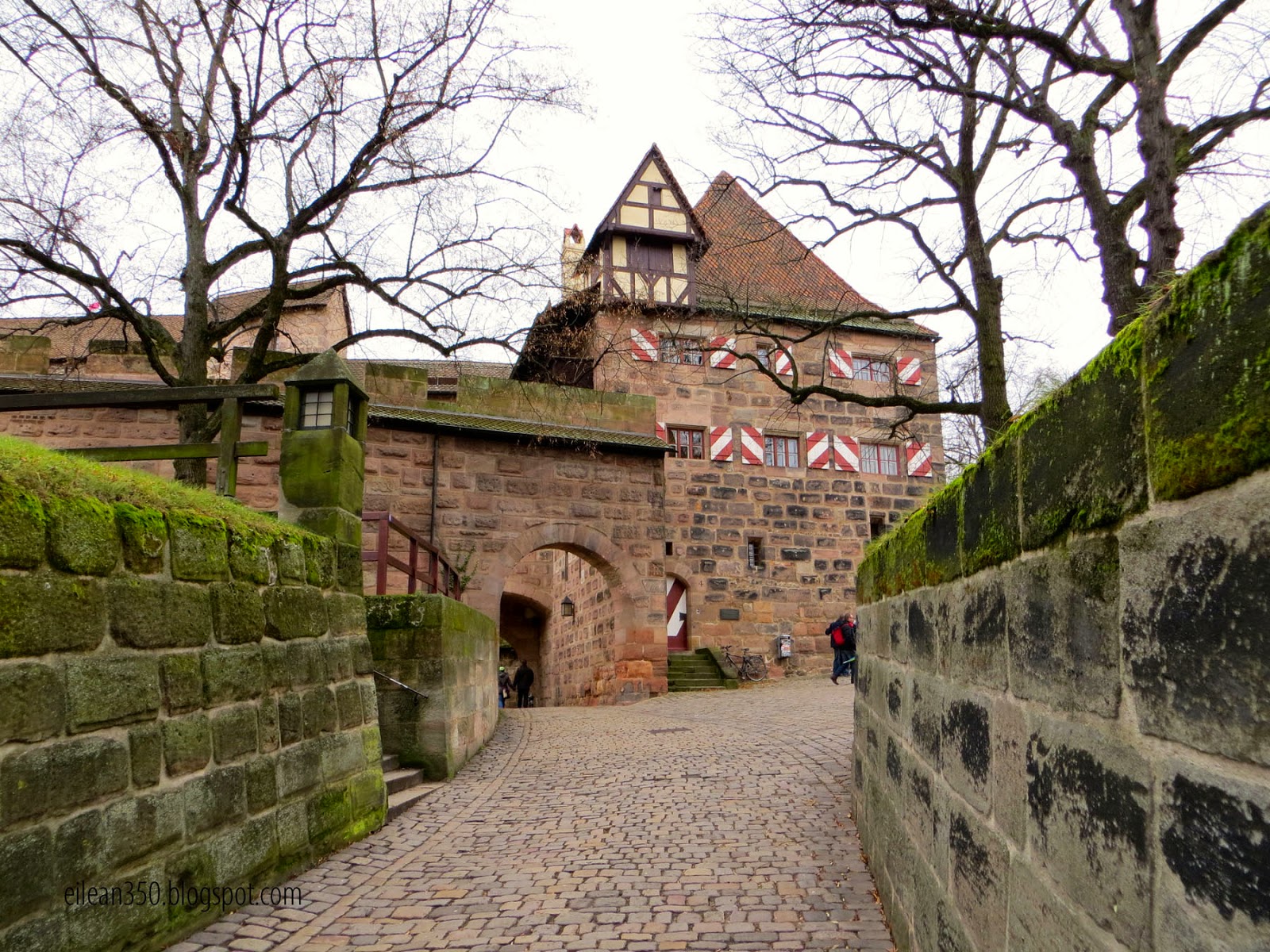 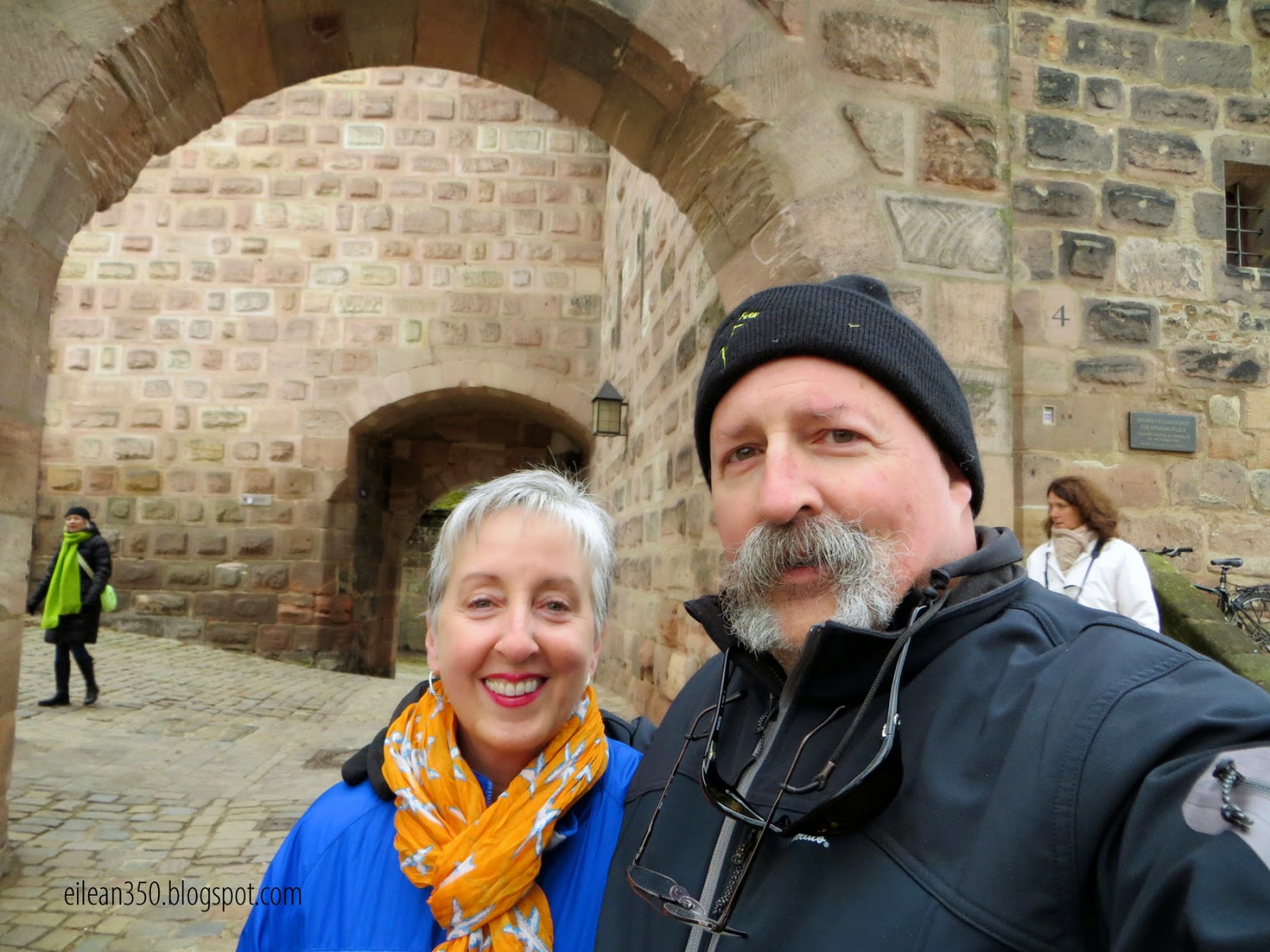 Built over 1,000 years ago - it along with 90% of Nuremberg was destroyed during
allied bombing in WW2.

It has been lovingly and painstakingly restored to its former glory. 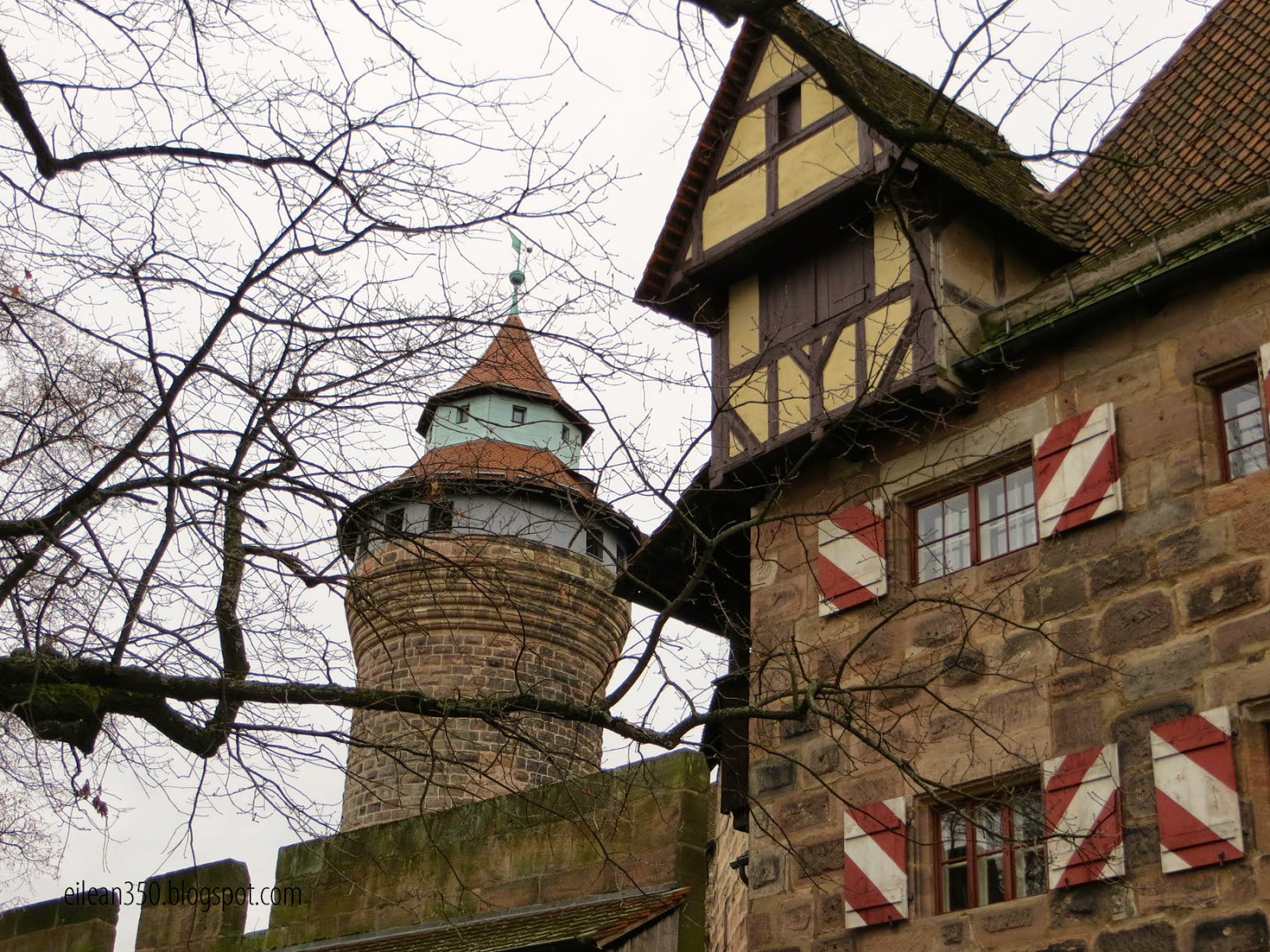 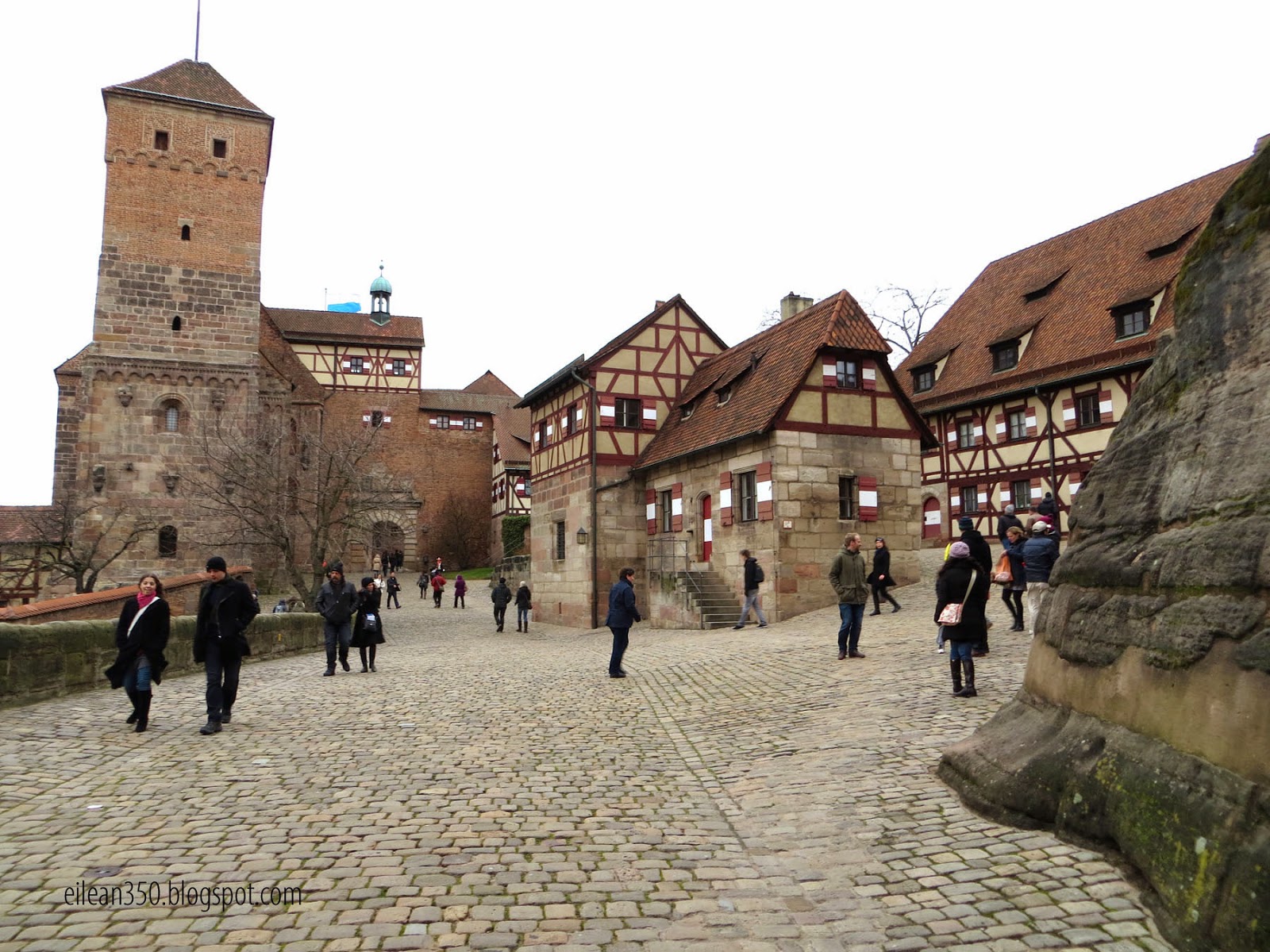 The shadows were starting to get long and I still wanted to
see the train station so down the hill and across town we went.

I am always impressed with the European Passenger Railway System.
Clean, efficient, on-time. 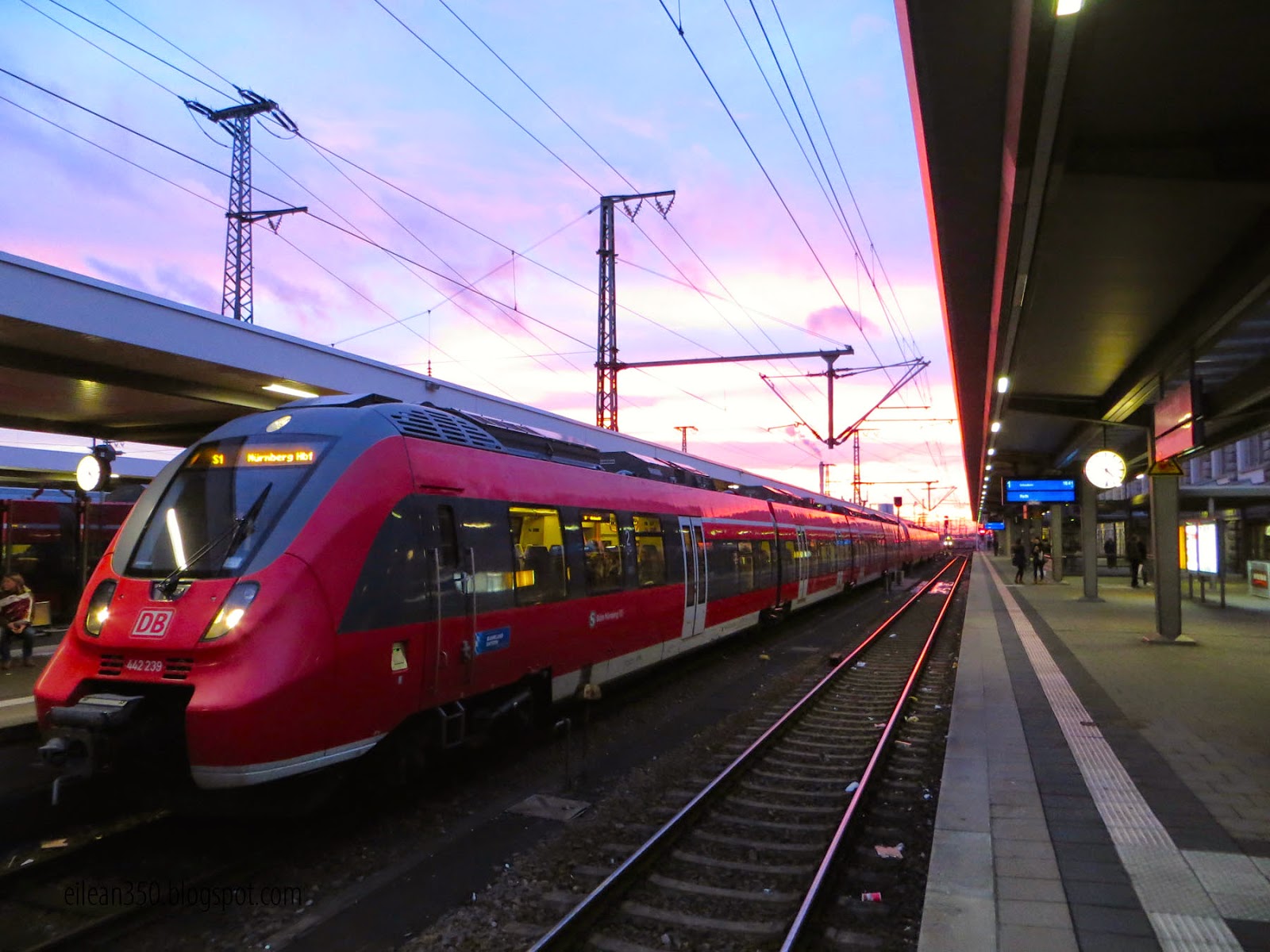 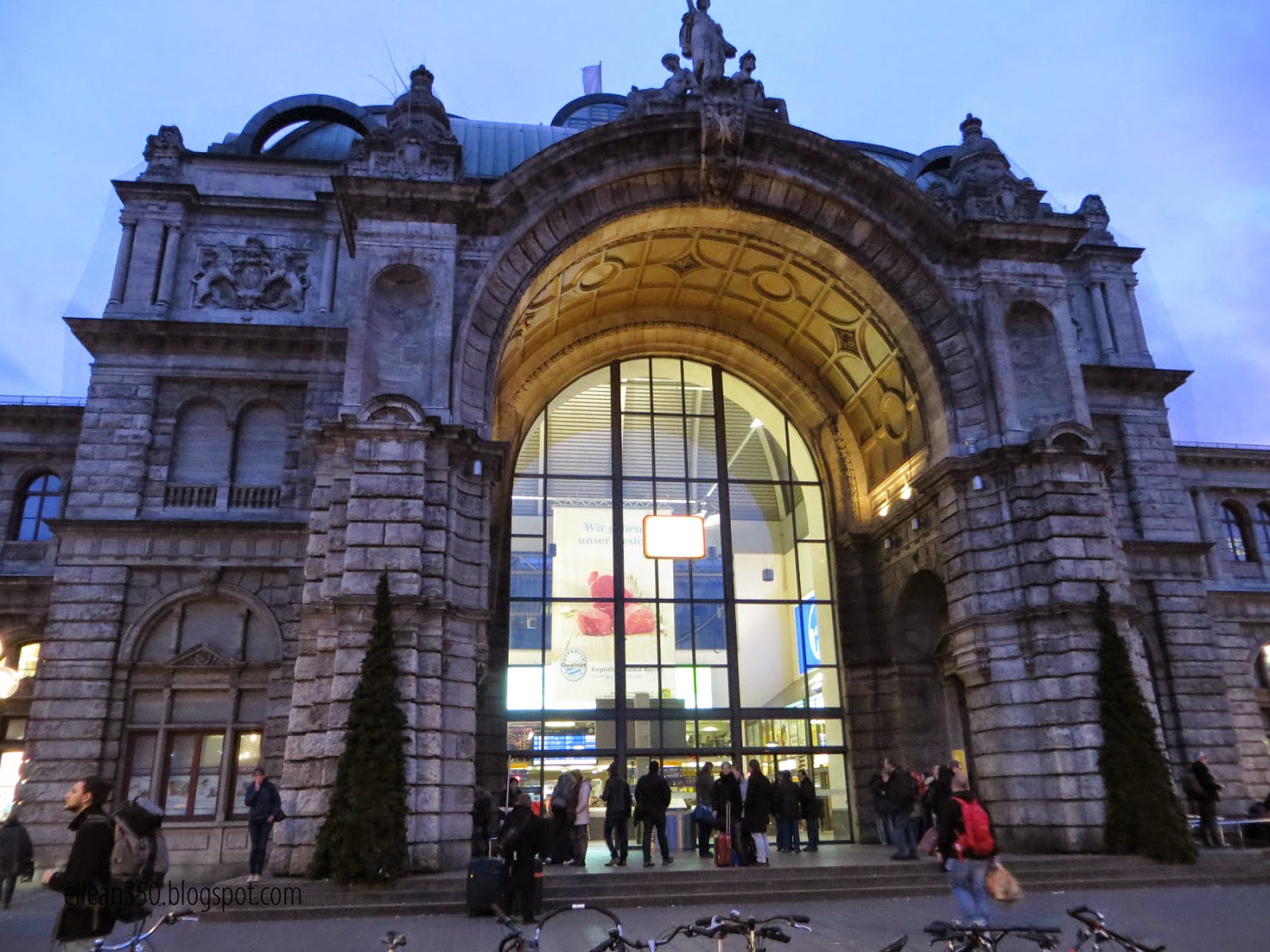 Now it was time for dinner...
Tonight I was to have a local Franconia delight...  Schäufele.

A roasted pork shoulder..  cooked so the meat is tender and falls off of the bone.
The layer of fat on top - crisp and flavorful.

Served with Kraut and Potato dumpling and served in a brown beer gravy. 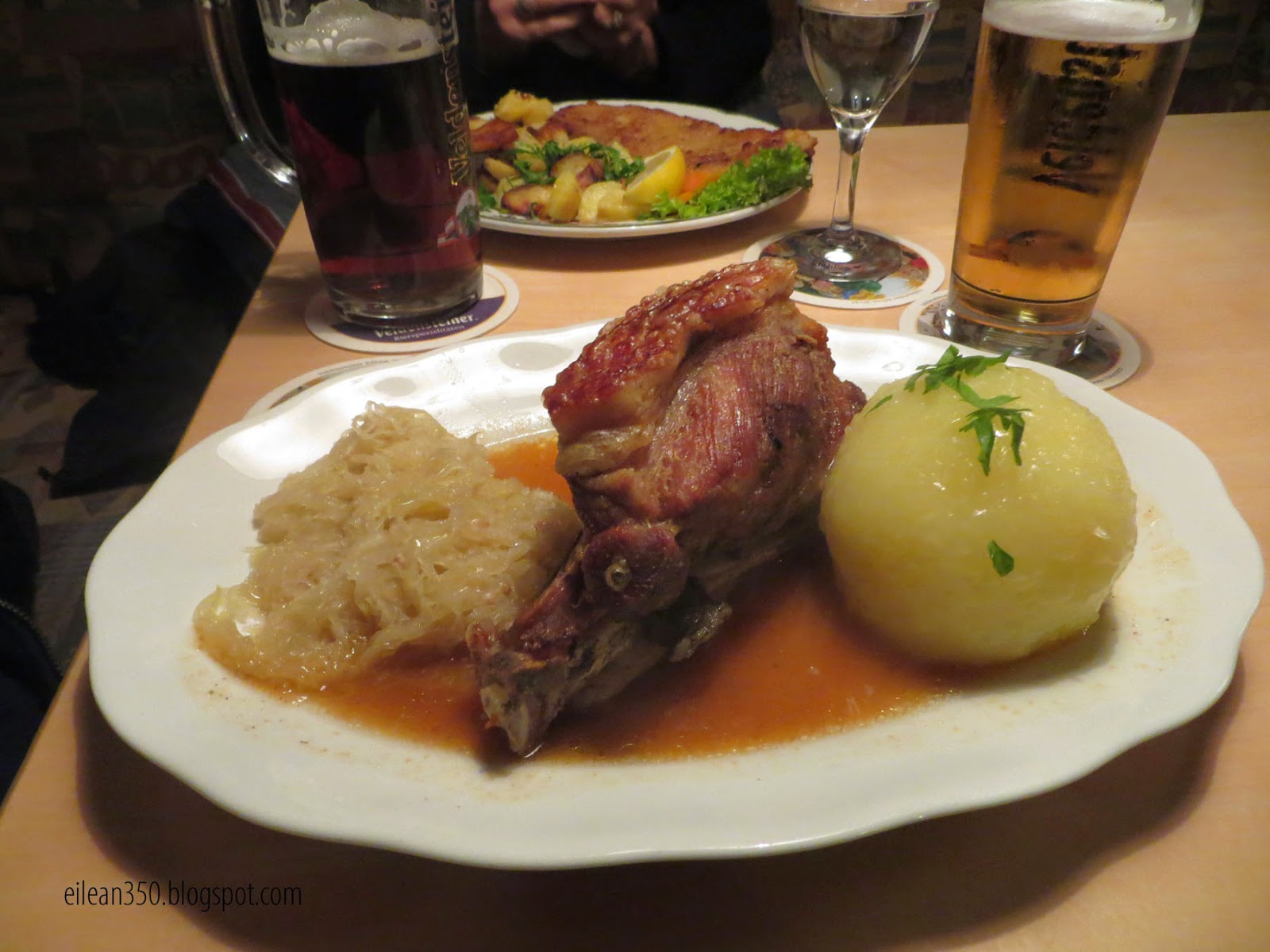 Kate had Wienerschnitzel and fried potatoes. 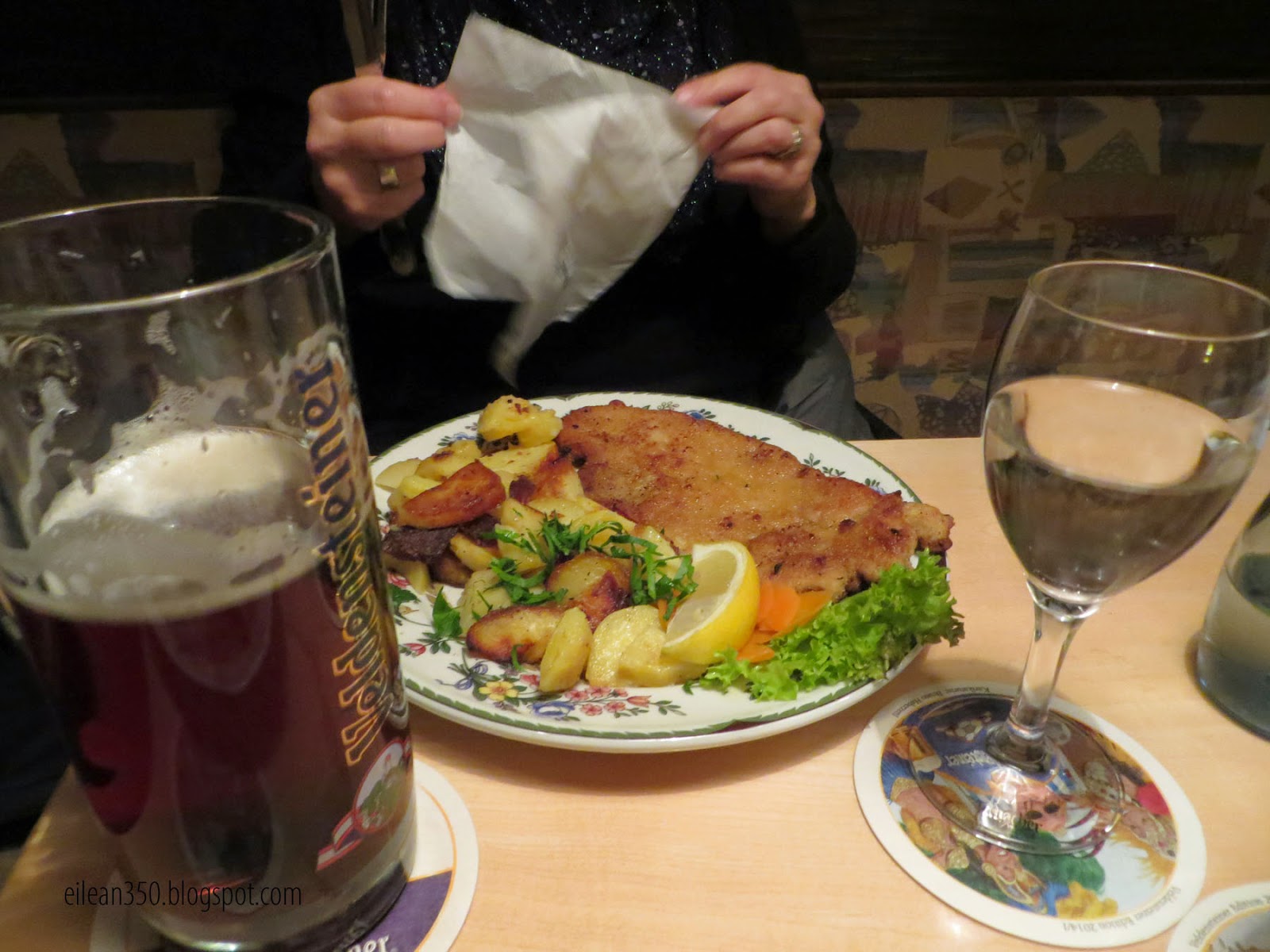 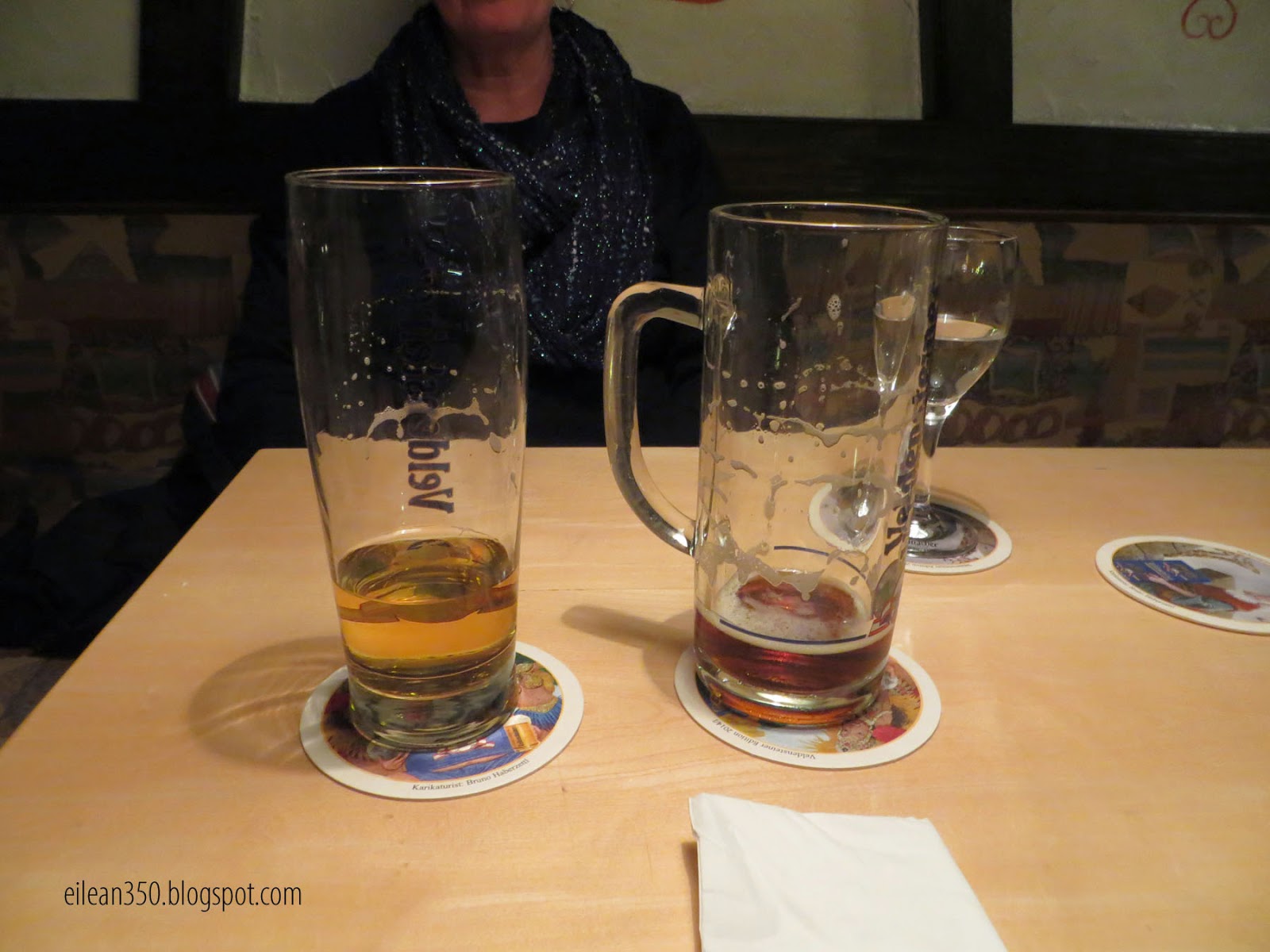 Nuremberg is a beautiful town.
We barely scratched the surface - there is so much more to see but its time to move on.
There was one more surprise though...

We ran into my long lost brother...  Fritz von Stash. 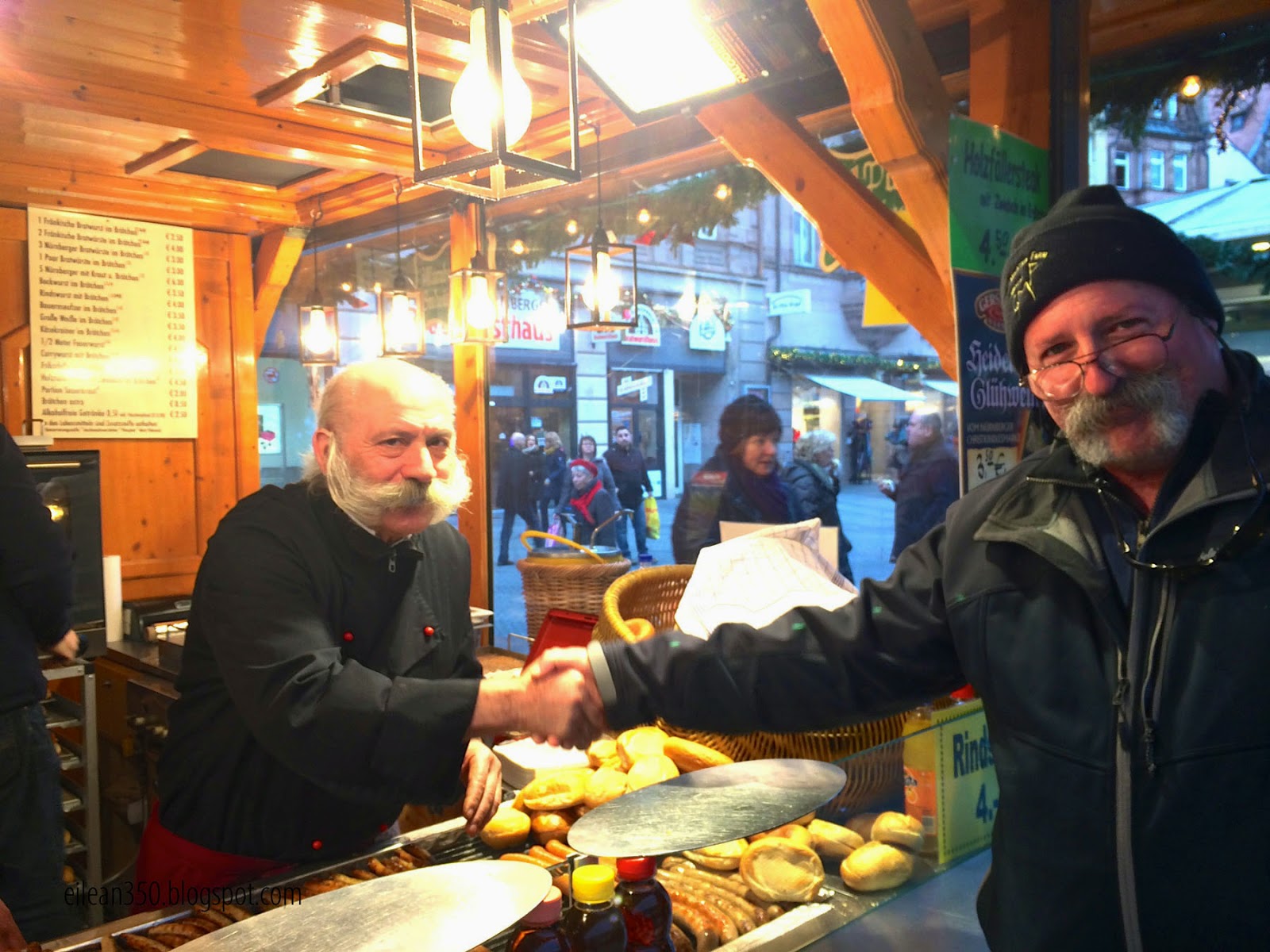 Can you see the family resemblance?

Tomorrow it's time to say goodbye to Fritz and Nuremberg,
we are headed to Rothenburg ODT a well preserved,
walled Medieval Town where we will spend 3 nights and Christmas.