The "odt" means on der Tauber (river) and is used to distinguish it
from another town with the same name.

We are staying in the Hotel Hernschlossen.
It is a 4-star Hotel and the service has been amazing from the moment
we set foot in the door.

They REFUSED to let us touch our luggage.
They said it is our holiday - and we should relax and come in a
nd have a glass of wine while the luggage is taken to our room....
So we had to oblige I reckon.

Our room with the typical German feather bed comforter.
I'm getting the hang of them.   Quite comfy. 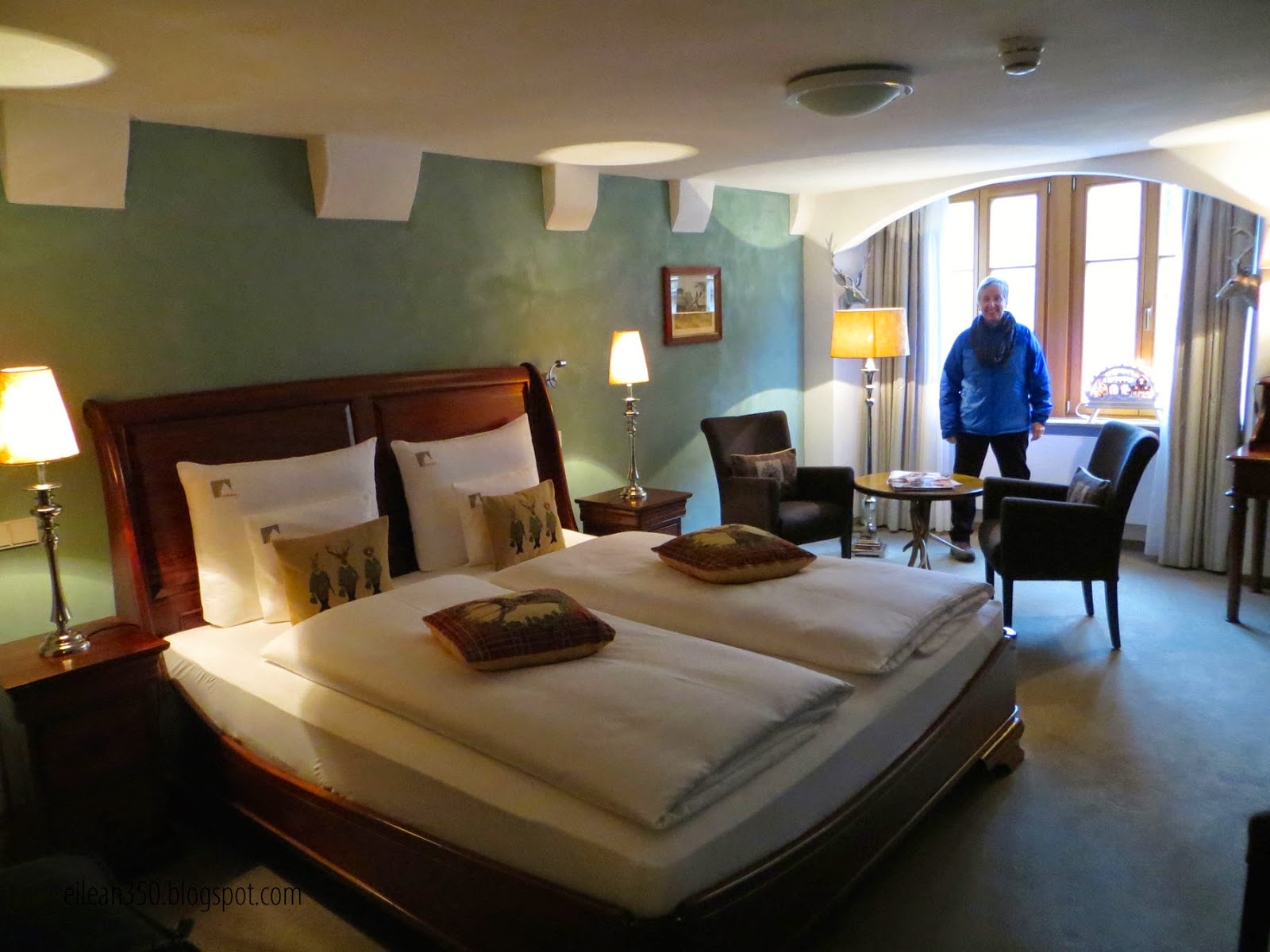 Very little of the town was destroyed during the war.
During WWII, Nazi soldiers defended Rothenburg with orders to fight until the end.
Parts of the city were bombed, including several houses and part of the wall.

The U.S. Assistant Secretary of War John J. McCloy knew of the historic significance
and beauty of Rothenburg so he ordered his generals not to use heavy artillery on the city.

The story is that McCloy grew up with a painting of Rothenburg on the wall
of his home that his mother bought after visiting the town.

His mothers love of Rothenburg was essentially what saved the city on the American side.

The local military commander, Major Thommes, also contributed to the city’s preservation by ignoring Hitler’s directive for all towns to fight to the end
and surrendered the town before it was destroyed, thus saving the city.

A few years after the war ended, the town named Secretary McCloy
an Honorary Protectorate of Rothenburg. 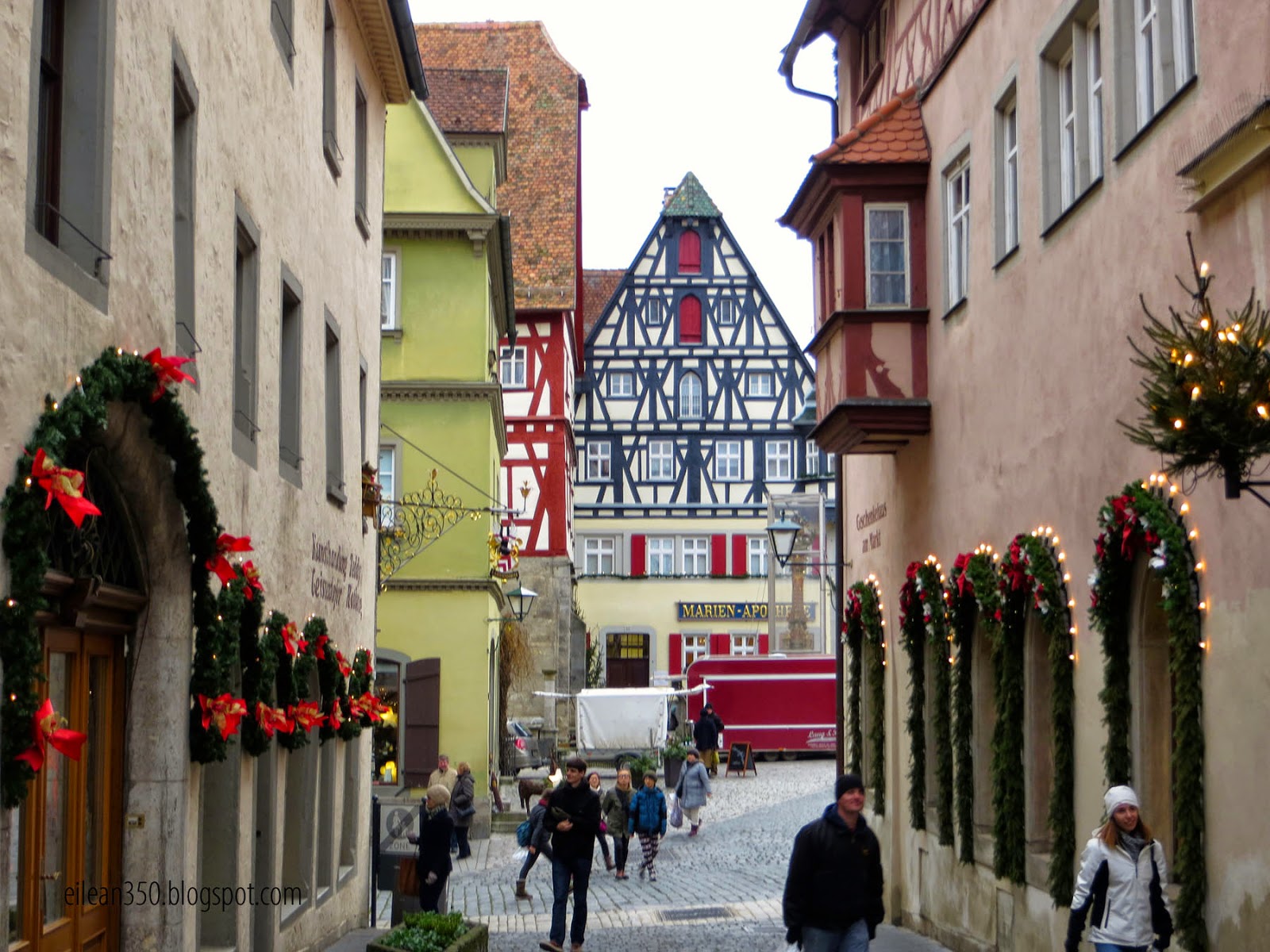 Schneeballen
(Snowballs)
A local pastry of shortbread dough deep fried and covered with all
sorts of confections. 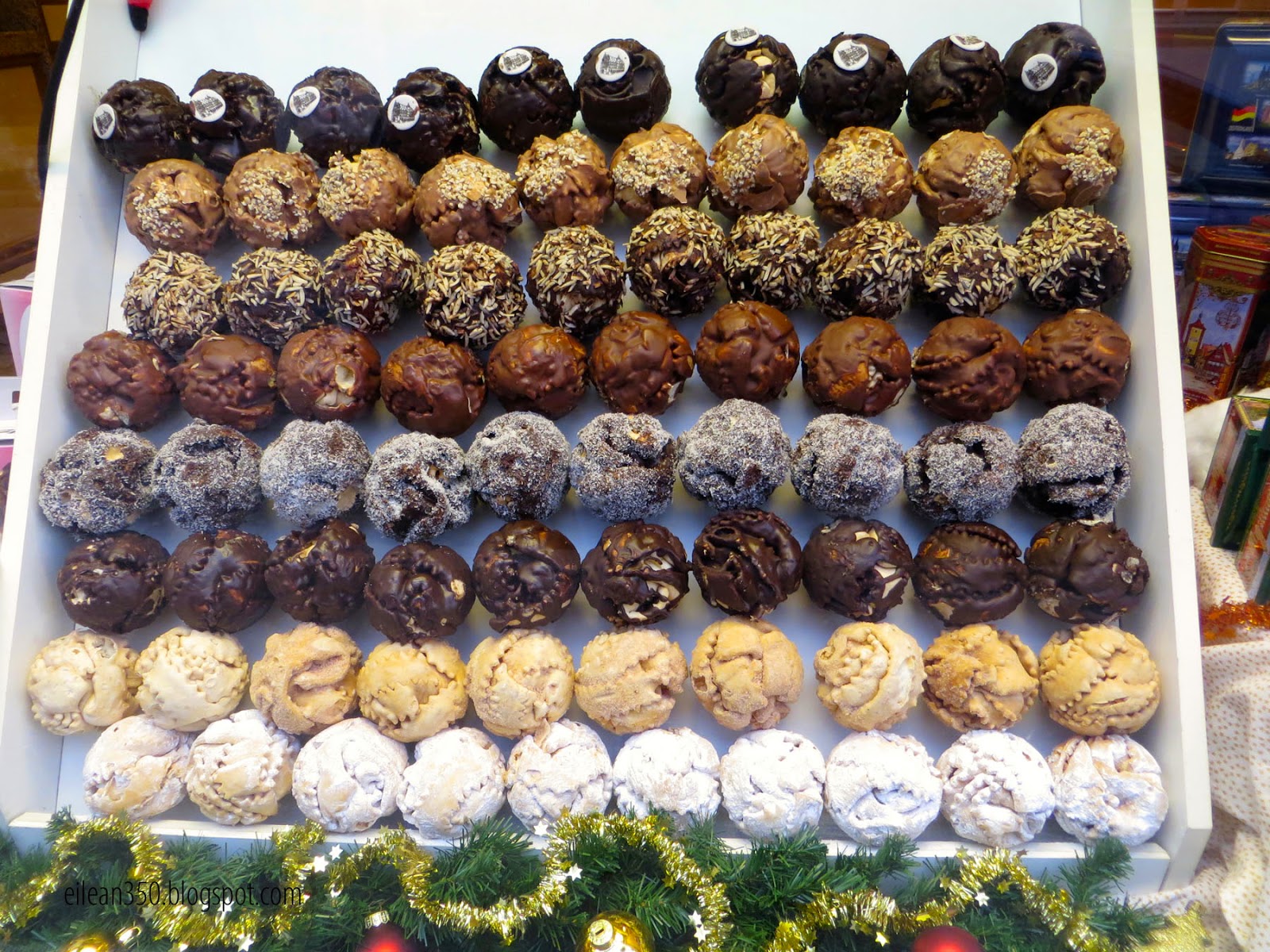 The town is just gorgeous.
Warner Bros filmed the Brothers Grimm Movie here.
It is so well preserved it has an almost Disney like feel to it. 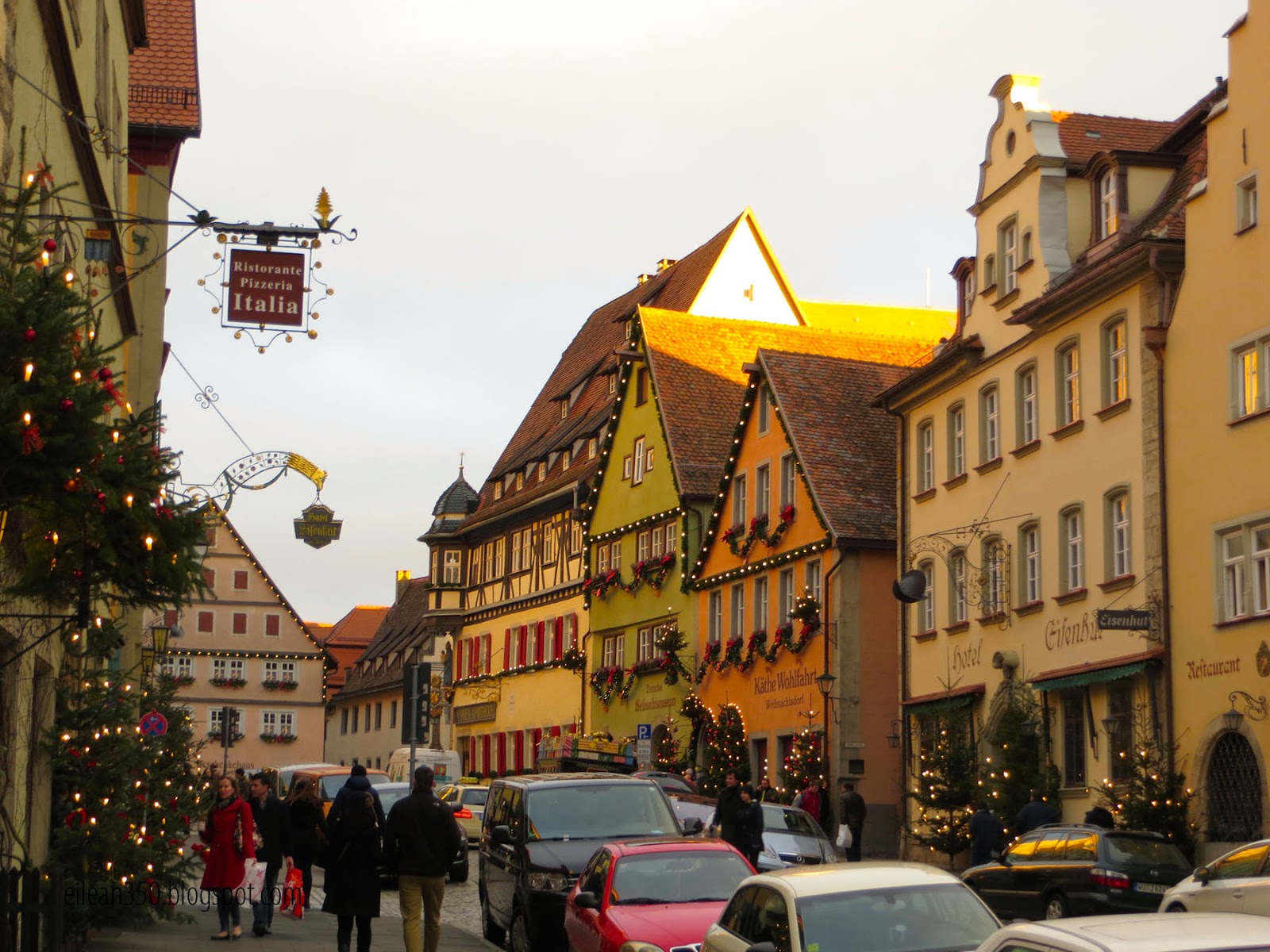 Last night we went for dinner to Zum Holl  (To Hell).
Located in the oldest building in town - it is over 1,000 years old. 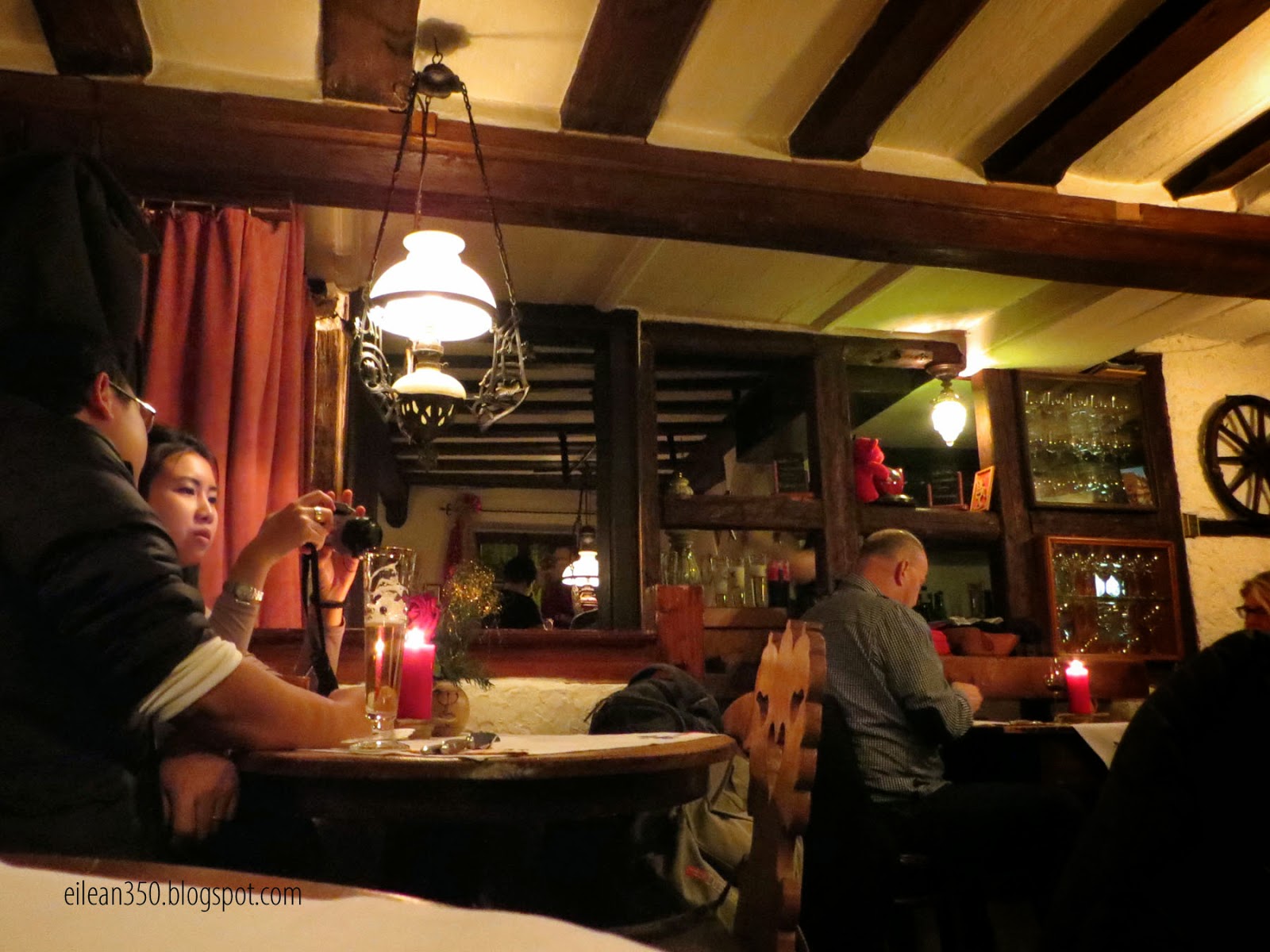 The food however was fresh and delicious.
Kate had consume followed by a steak, fried crispy onions and spaetzle.
It was extremely delicious and the steak could be cut with a fork.

I had Horseradish soup (out of this world) baby back ribs with
Fried Potatoes.
The baby backs were also quite good.  They were slow cooked, tender
and had a German flair to them.  Quite different and a nice change.

All was washed down with a healthy dose of light and dark beers and Champagne. 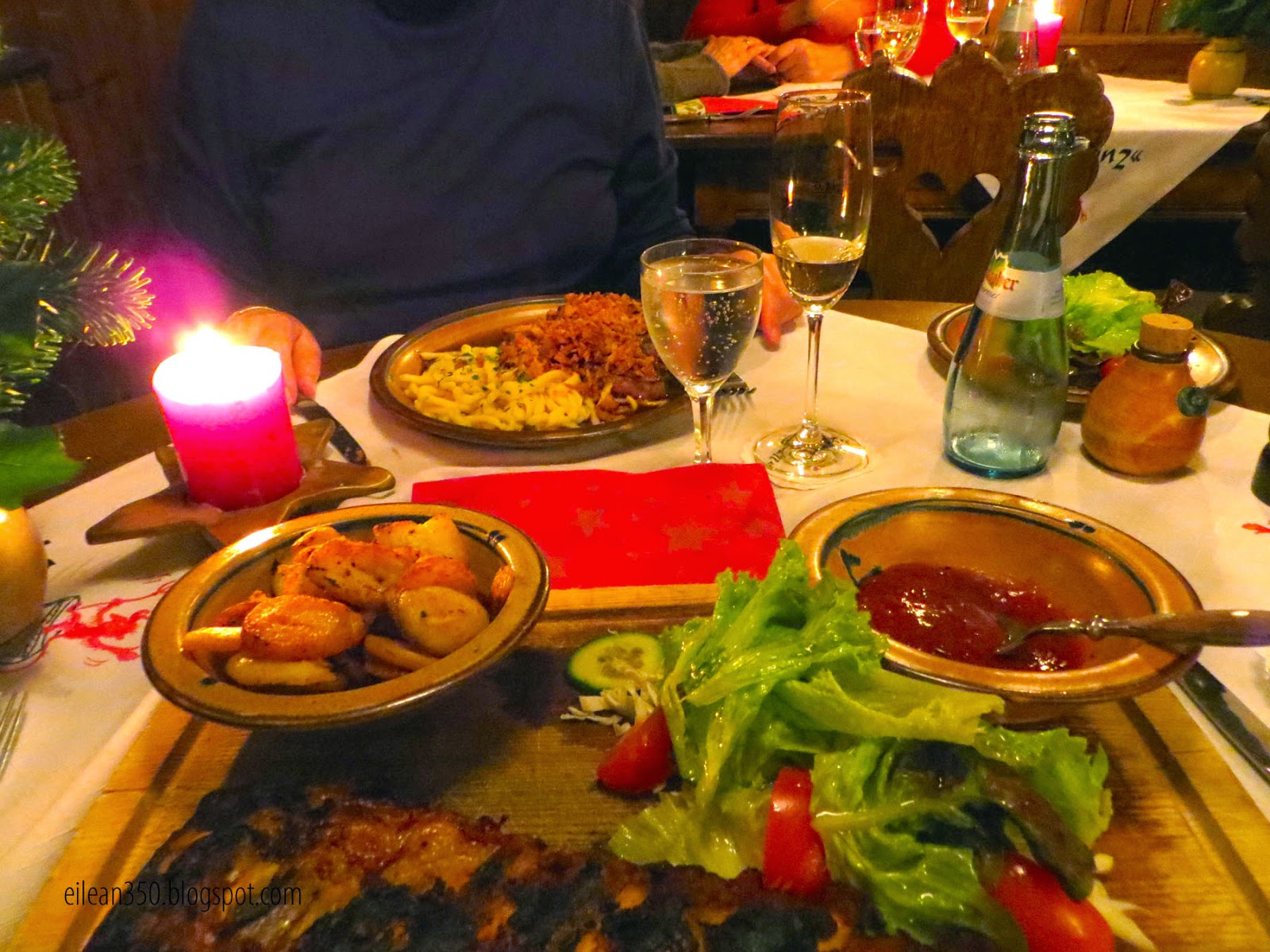 After dinner we had a long long walk back up a long hill.
(did i mention it was long)
We knew on the way down that we'd probably pay for dinner later.

Around every corner is another fantastic fairy tale scene. 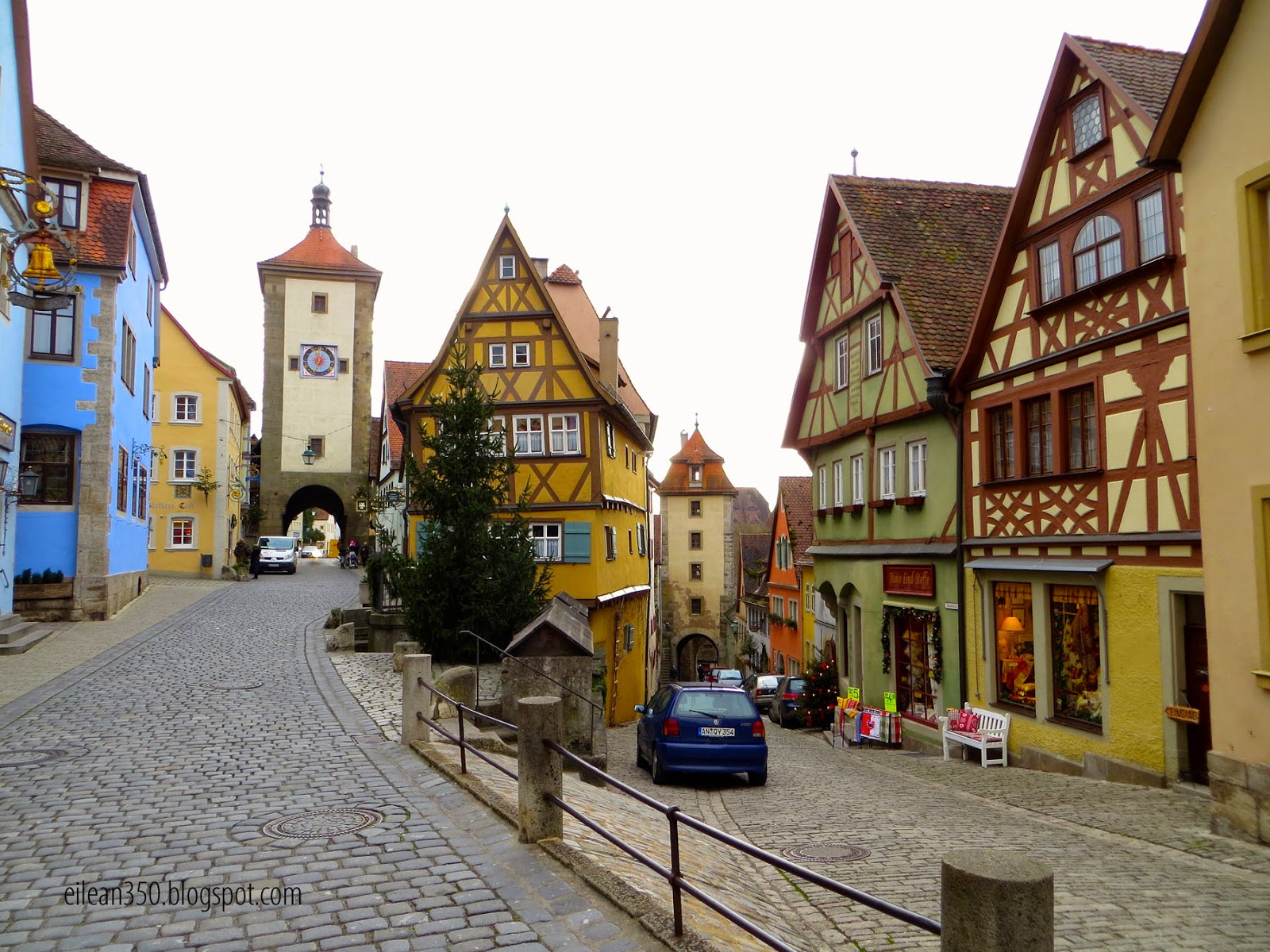 This morning after breakfast we hit the city wall.
We wanted to walk around the whole city. 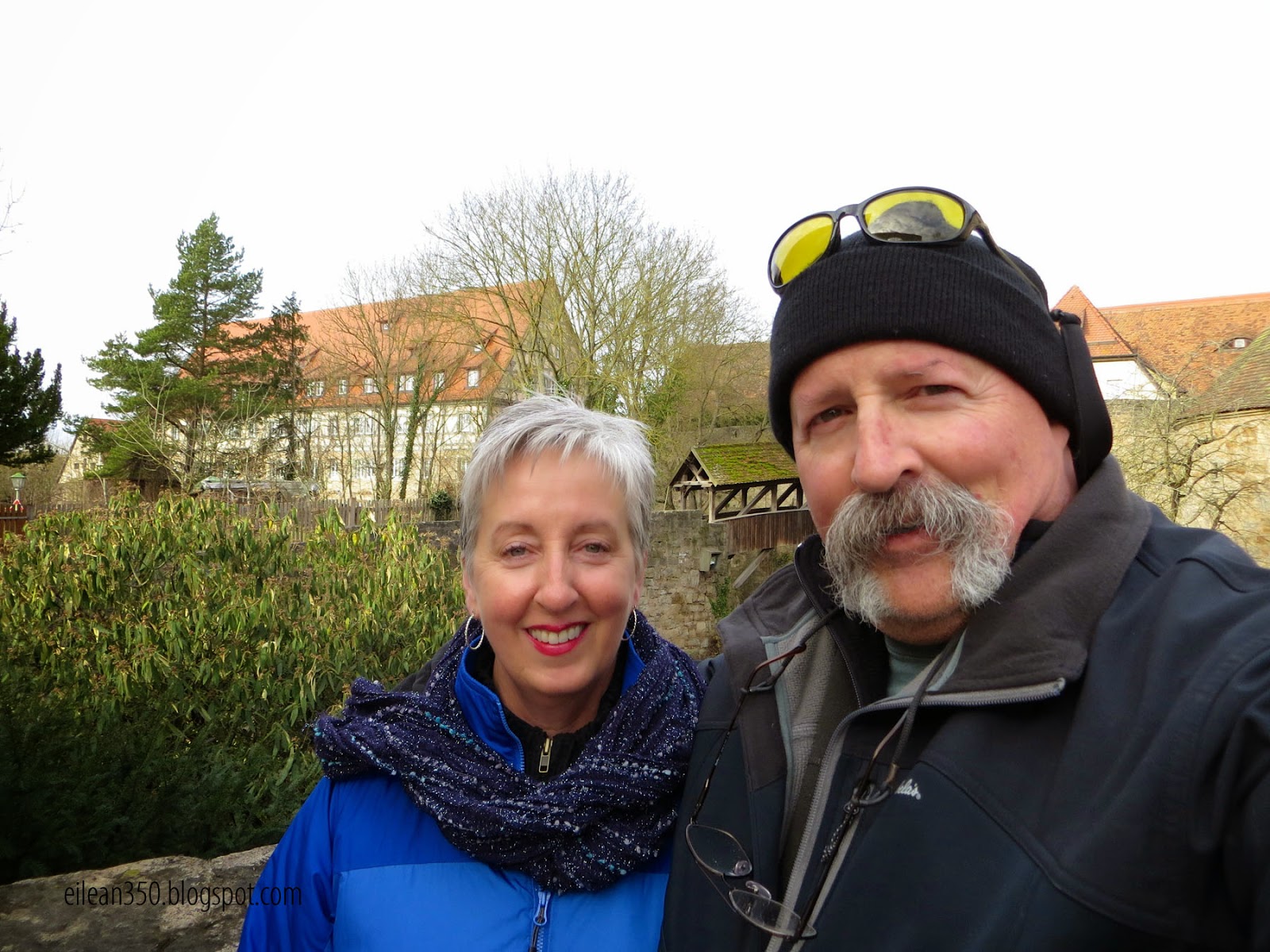 A view standing outside of the wall.
There are small slits all along the wall where
the archers could fire arrows at invaders. 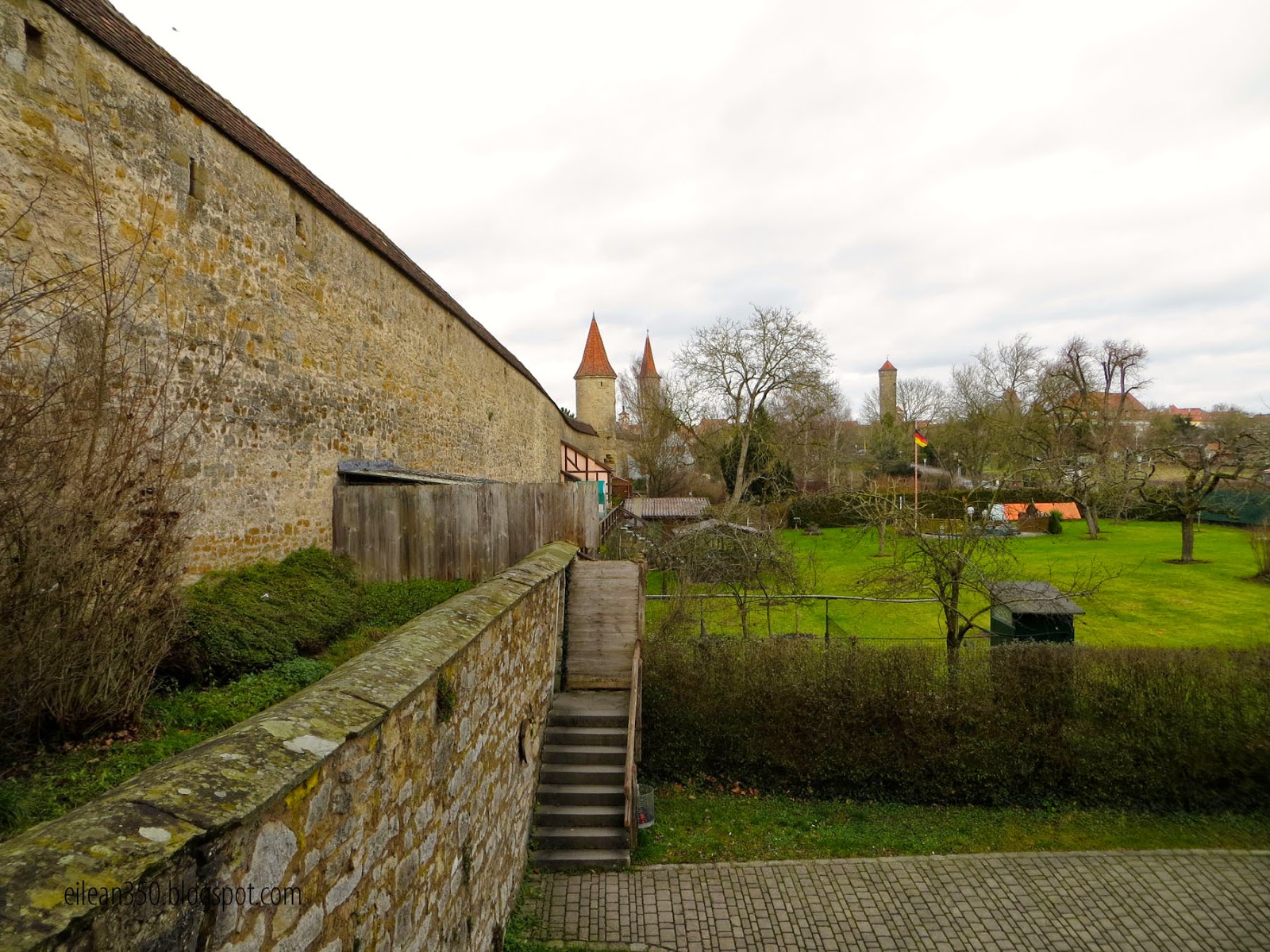 A watch tower on the wall. 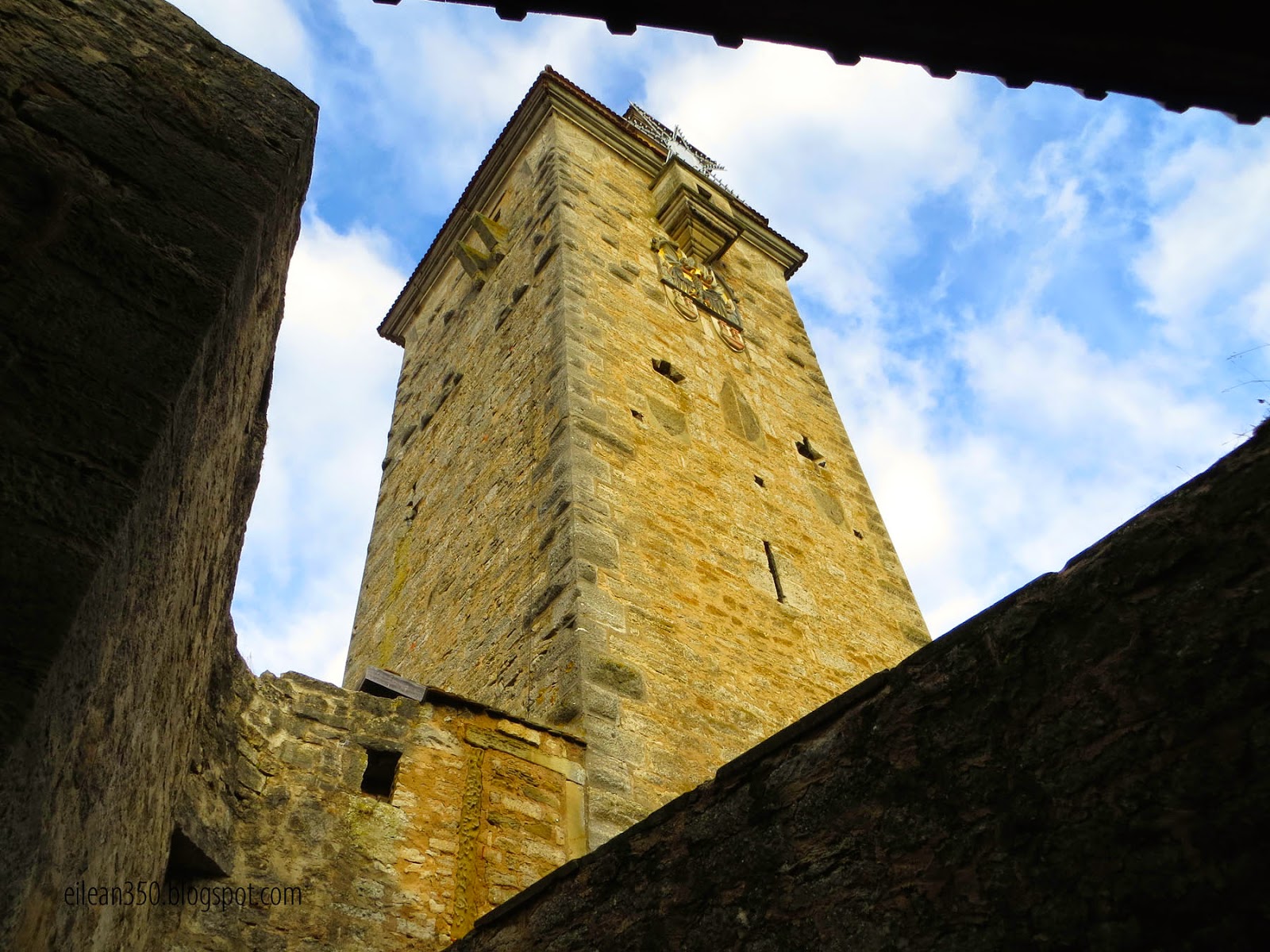 Looking inside the city from the wall walkway where the defenders would have
positioned themselves to defend the town. 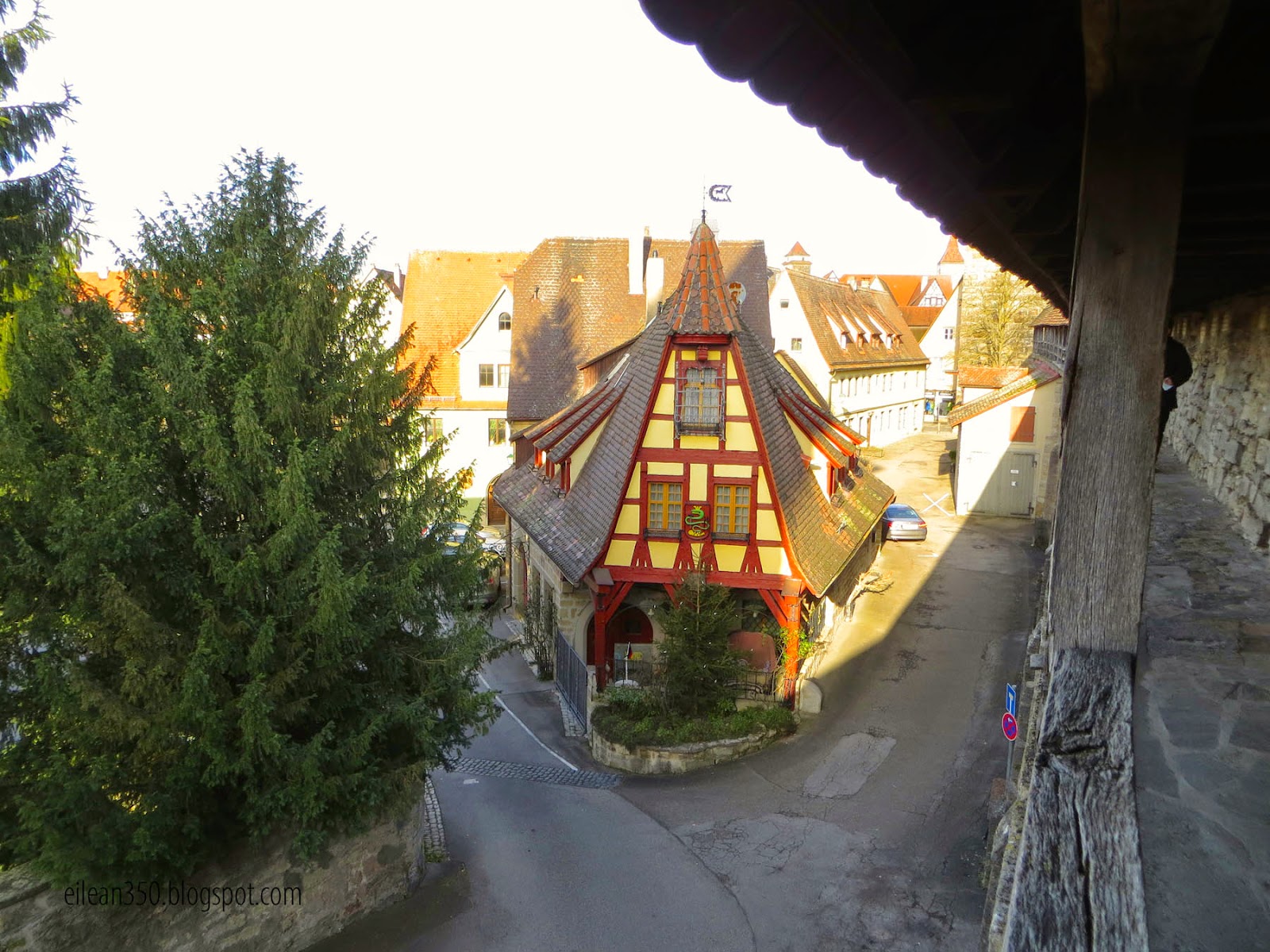 Walking the back alleys.
I just love the little courtyards that lead to the homes. 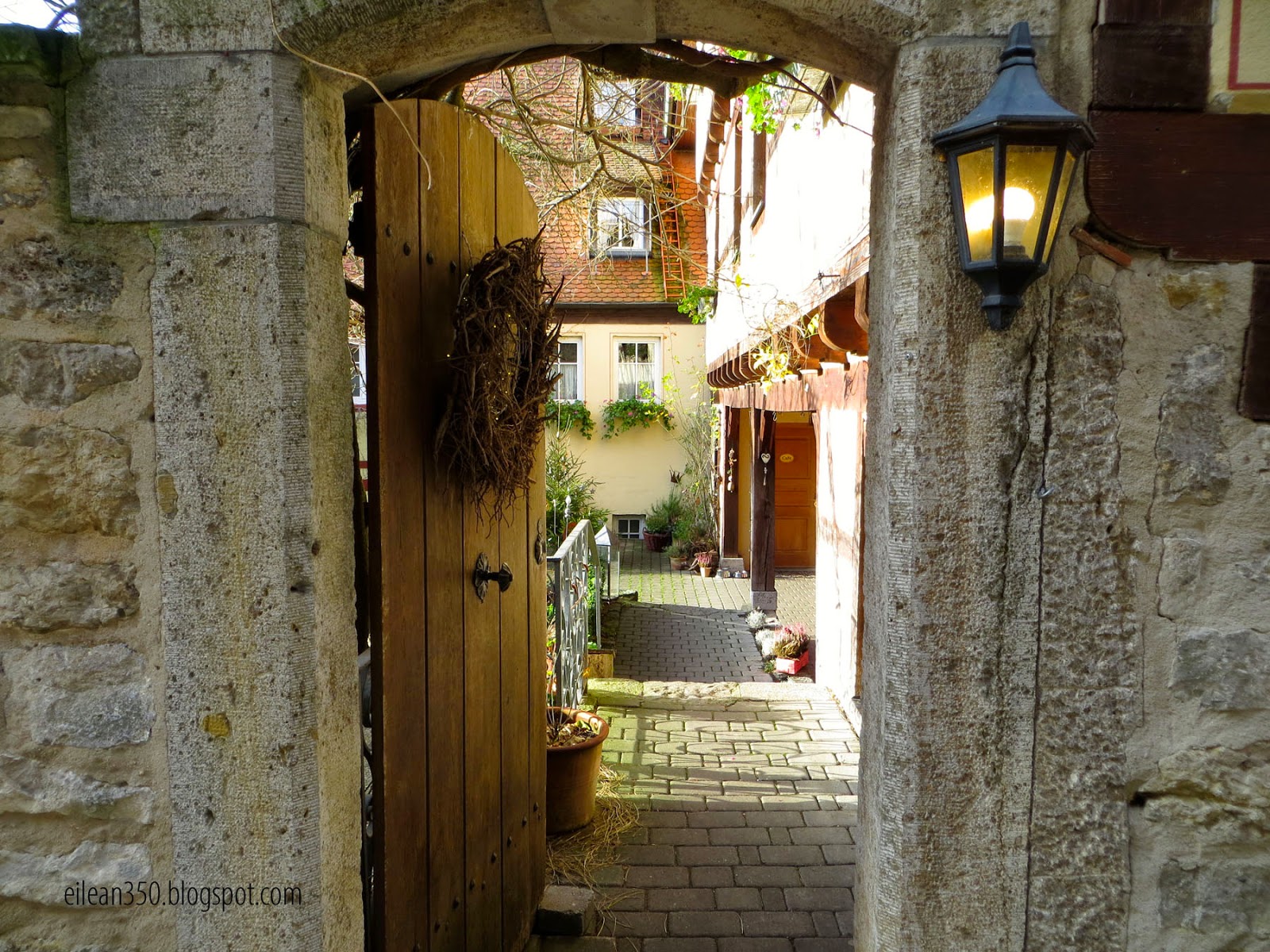 The sun started to come out as we were finishing up our morning - afternoon walk. 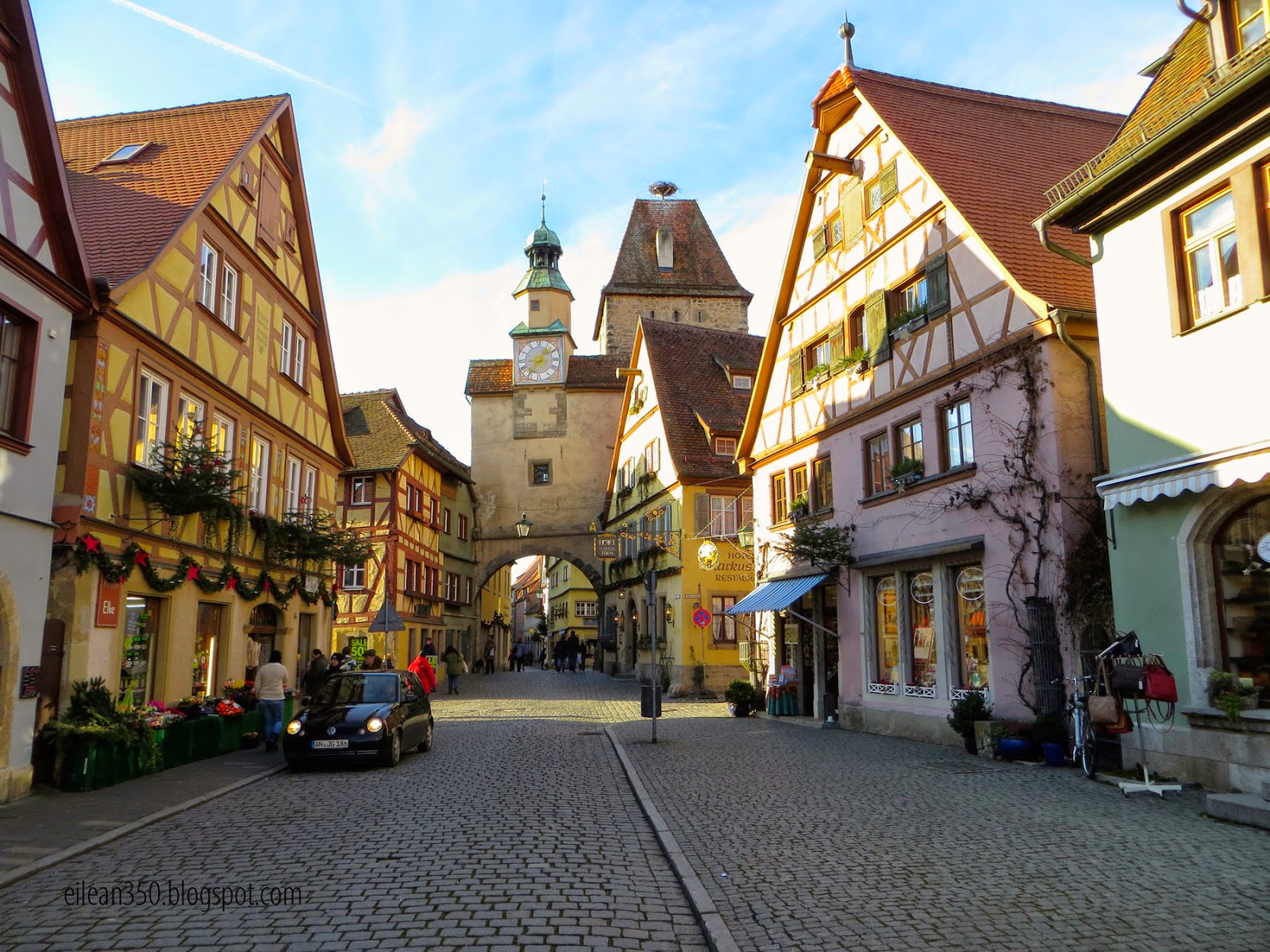 I hope to get some more sunny photos before we depart.
We will spend tomorrow - Christmas Day here - and then on the 26th
head about 4 hrs back north past Frankfurt to visit our
friends at their parents home for 2 days.

It's 3pm Christmas Eve here in Deutschland.
I expect the sidewalks should start rolling up soon as
Christmas Eve (Weihnachten) is the real family holiday here.

We will have a nice special Weihnachten meal here in our hotel
and then see what tomorrow will bring.

So from Herr Fritz und Frau Helga
to all of friends, family, blog followers...
Whatever you celebrate - we hope its a great one!