Our intrepid band of explorers arrived in Whitehorse yesterday around 1pm.
Our drive was on one of those stereotype days that one might expect in the
far north country.  It was raining, low clouds hid the high peaks, all was accompanied
by a cool moist breeze that cut thru your clothes and chilled you to the bone.

It was a delightful change of pace.

Arriving in Whitehorse the rain had let up and the air hung heavy with the
scents of moist earth and pine.

We were assigned 3 side by side pull thru sites at the Hi Country RV Park,
a heavily wooded park not typical of many commercial facilities.

The park has a pay for wifi program but the rates are reasonable - $7.99 for
24hrs.   They do restrict certain sites like UTube for instance - this prevents guys like me
from sucking down the entire bandwidth of the place - and that is entirely reasonable as well.

So, I spent the afternoon getting caught up on work items and then around 5pm it was
time for our daily happy hour which we spent down at Johns Rig.
Johns leg is getting better each day so while he is still staying off of it, we expect
with care he'll be hobbling around in no time.

Dave has been taking good care of John so I expect once he's back on his feet
its gonna be payback time!

Dave has also been doing a great job driving the rig, backing it in and so forth...

Today we set out on our first day exploring Whitehorse.
Whitehorse is the capital city of the Yukon.
The population of about 27,000 makes it the largest city in Northern Canada.
Most of the population of the Territory is located right here.

The strategic location on the Yukon river placed it square as the hub of traffic
during the Klondike Gold rush of the 1890's and helped to propel it from a tiny outpost
to the hub of the region it is today.

Miners would arrive by sea in Skagway Alaska (and other nearby ports)
struggle over the Coastal Mountains and then those with cash could take a steamer down
the Yukon River to Dawson City where the gold finds were taking place.

Those without the cash floated down the river on just about every imaginable type of
ramshackle craft you could think of.   The journey was fraught with perils.

The Government of Canada required that each miner must have a years worth
of food to be allowed entry and passage on to the Klondike.   This worked out
to about 2,000 lbs per man.   Just think of it...  each man had to figure out how he was
going to move 2,000 lbs of goods almost 700 miles thru the wilderness!

Our next two stops on this trip - in order - will be Skagway then Dawson City.

Although built after the gold rush had moved on, the Steamer
SS Klondike was representative - abeit more modern - of the type of vessels that plied
the river during the period. 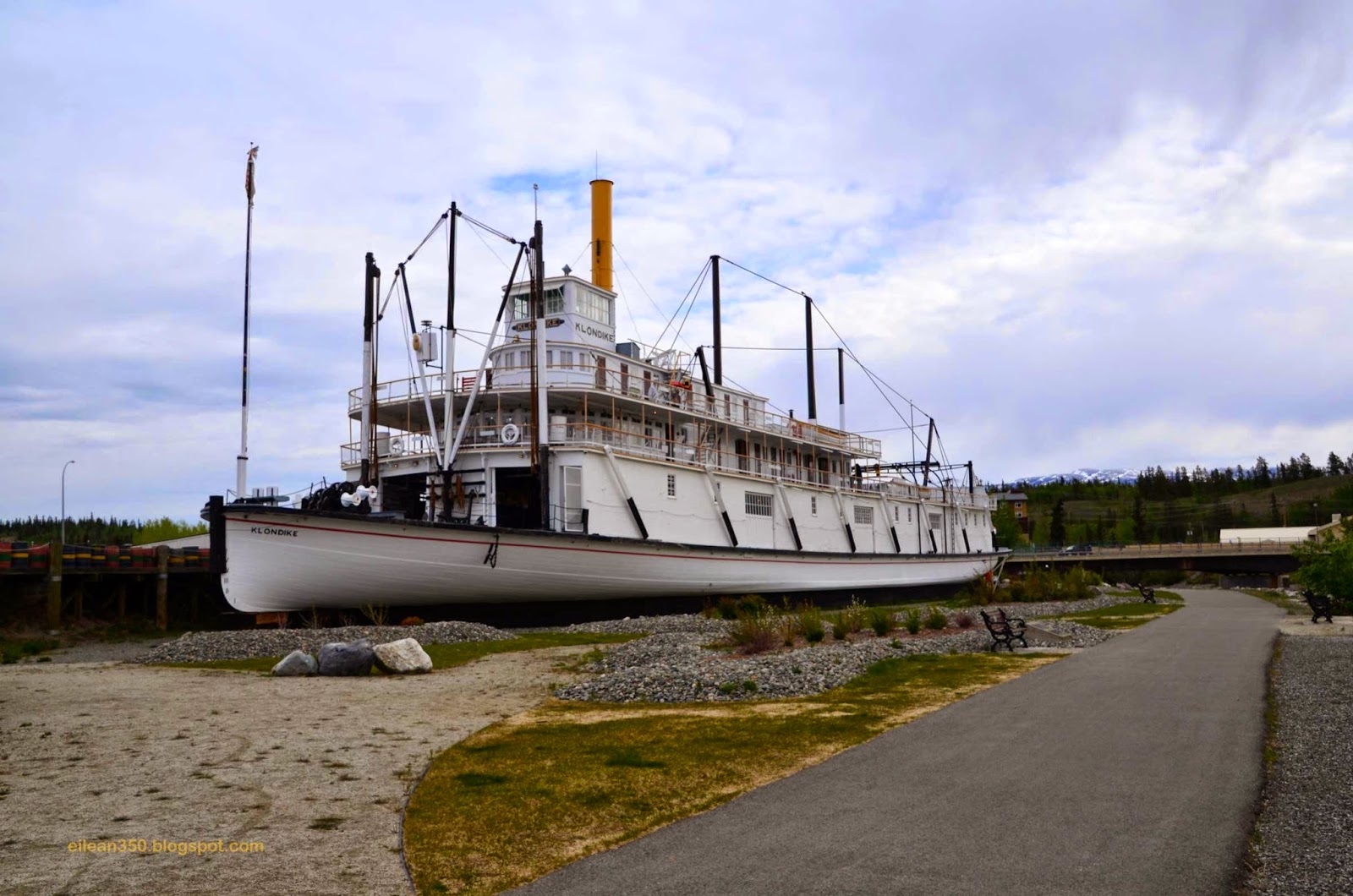 For my sailing buddies...
Those white and black diagonal poles behind us are the ships fenders in stowed position.
Hang those on your IP's folks! 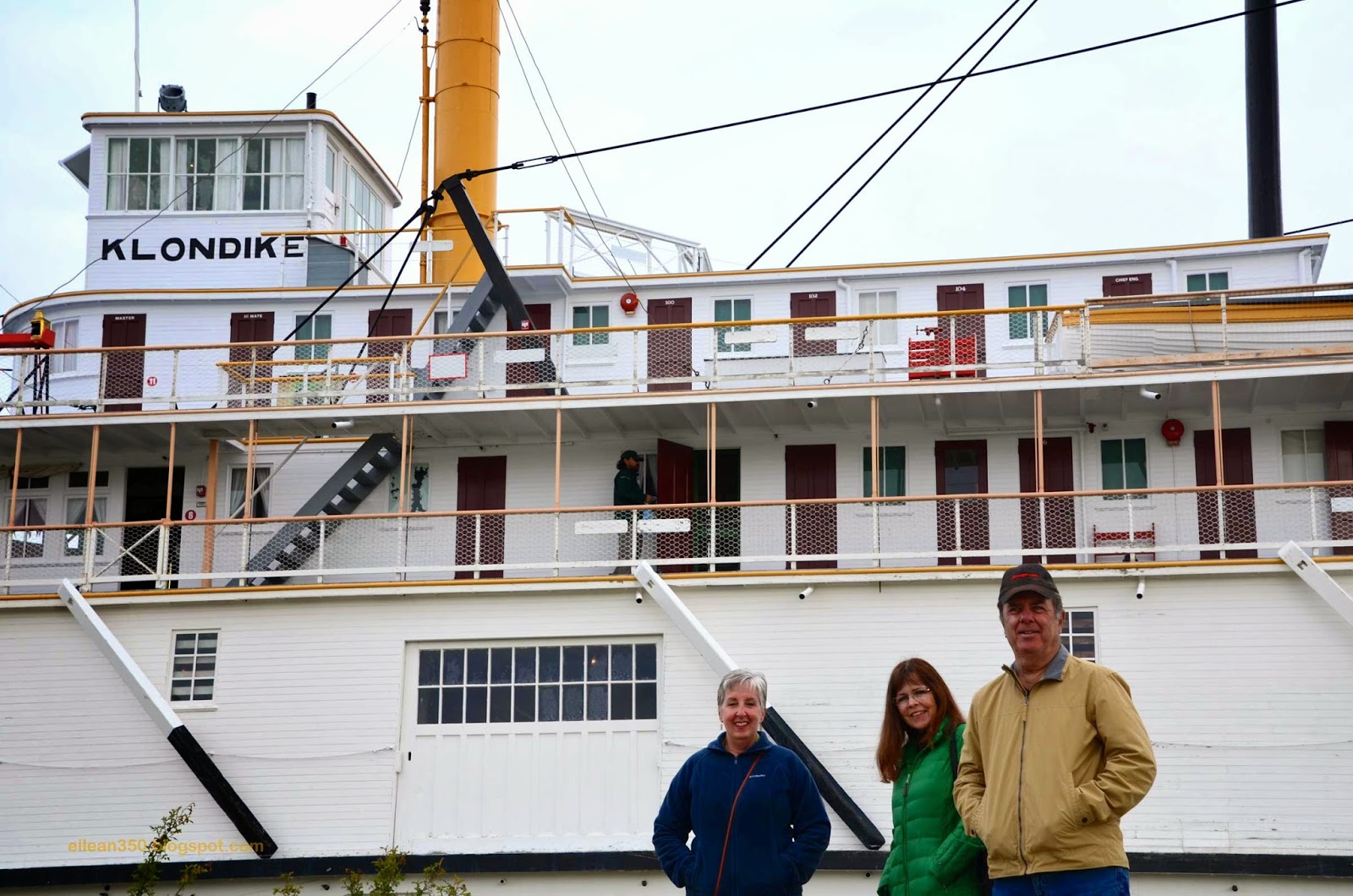 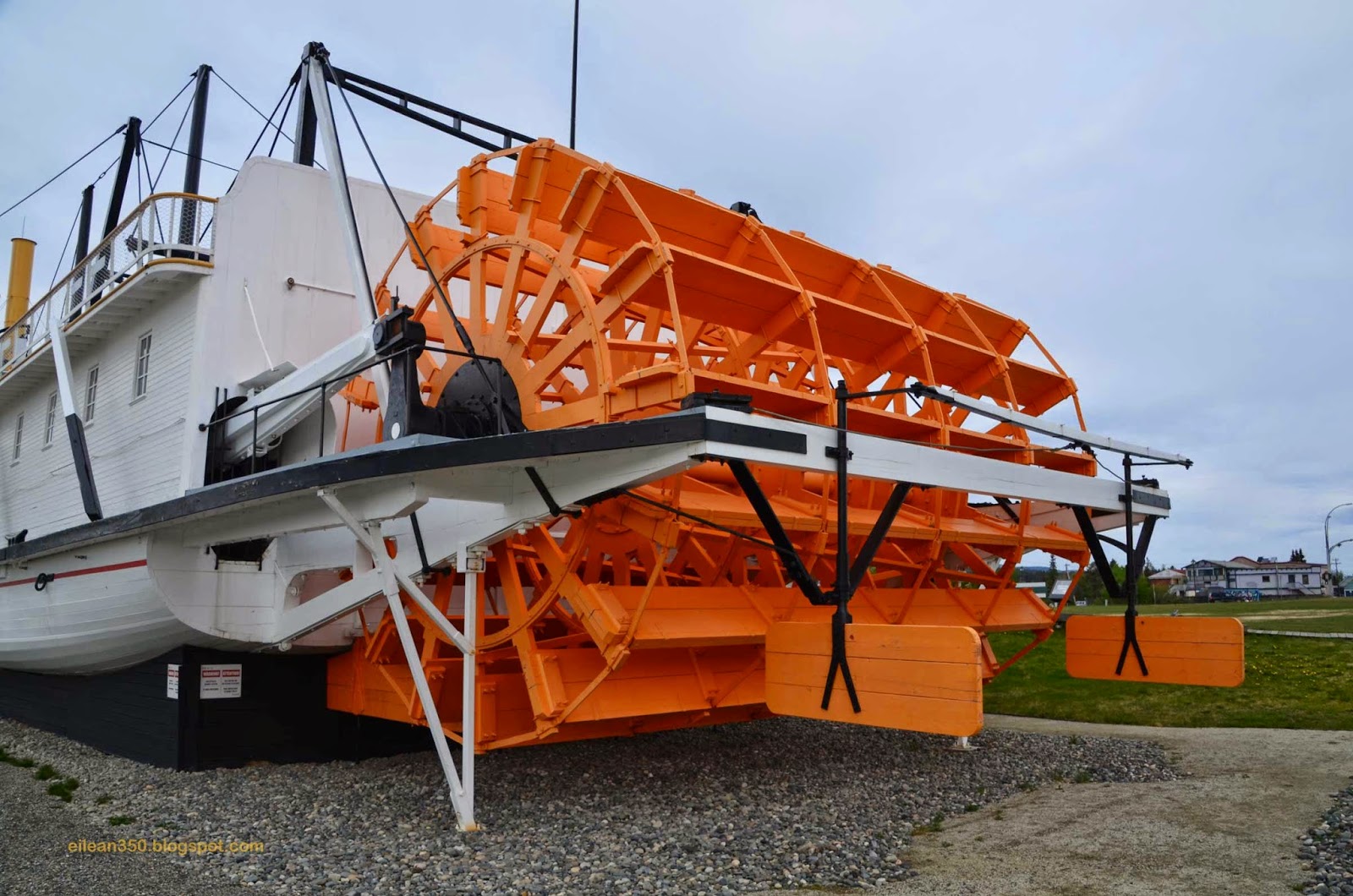 The steam boilers consumed about 1 cord of wood per hour.
All that wood fed thru this port. 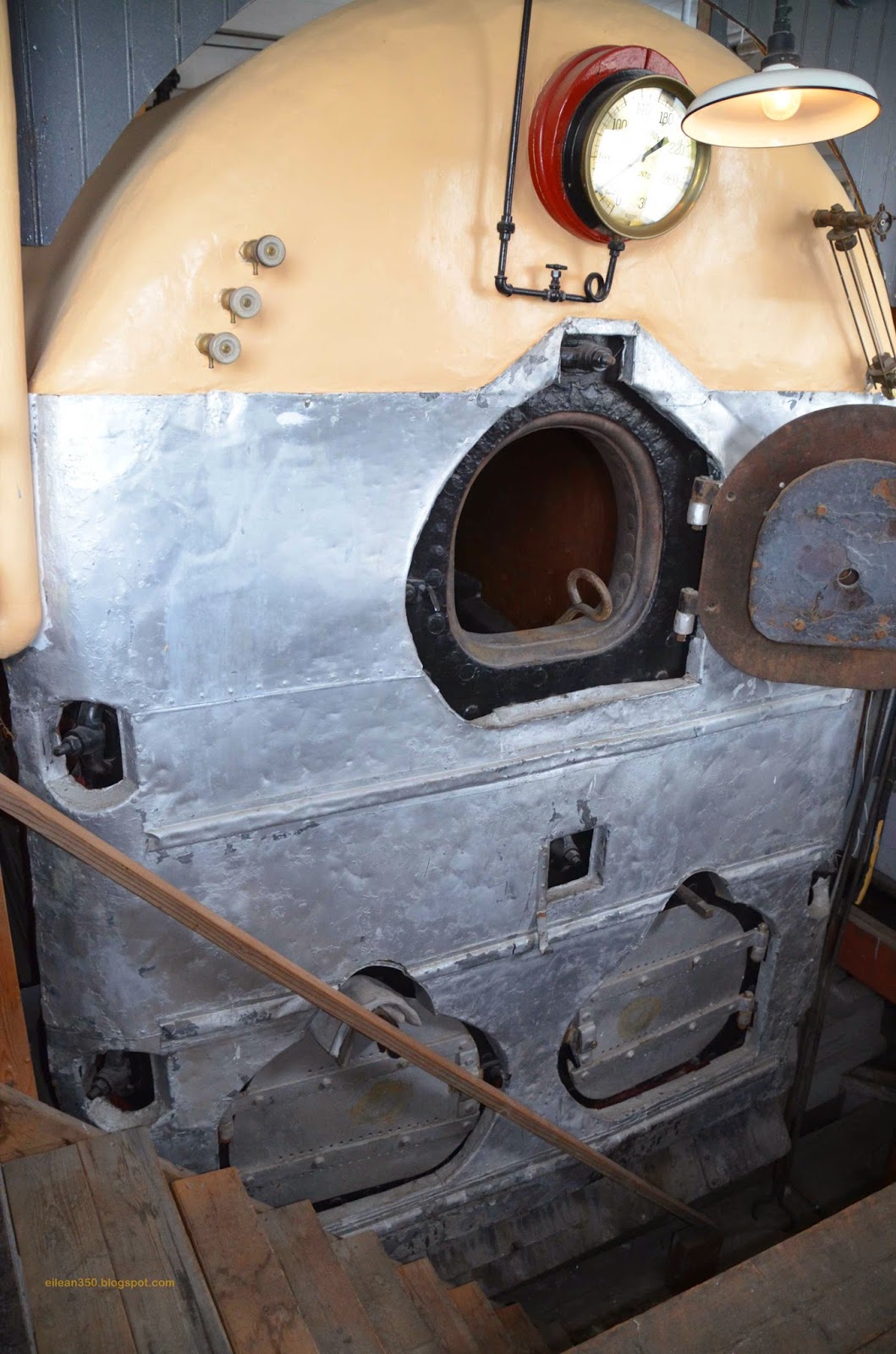 The SS Klondike was used mainly for ferrying cargo to and from Dawson City.
Passenger service while important was secondary.
Once the Klondike highway was completed the ships mission ended.

All of the furniture and fittings on this ship are antiques.
Items like original menus, tableware, seats, and even food containers
are all over the ship which really lends an air of authenticity to the visit.

Second class passengers were limited to the cargo deck and sun deck. 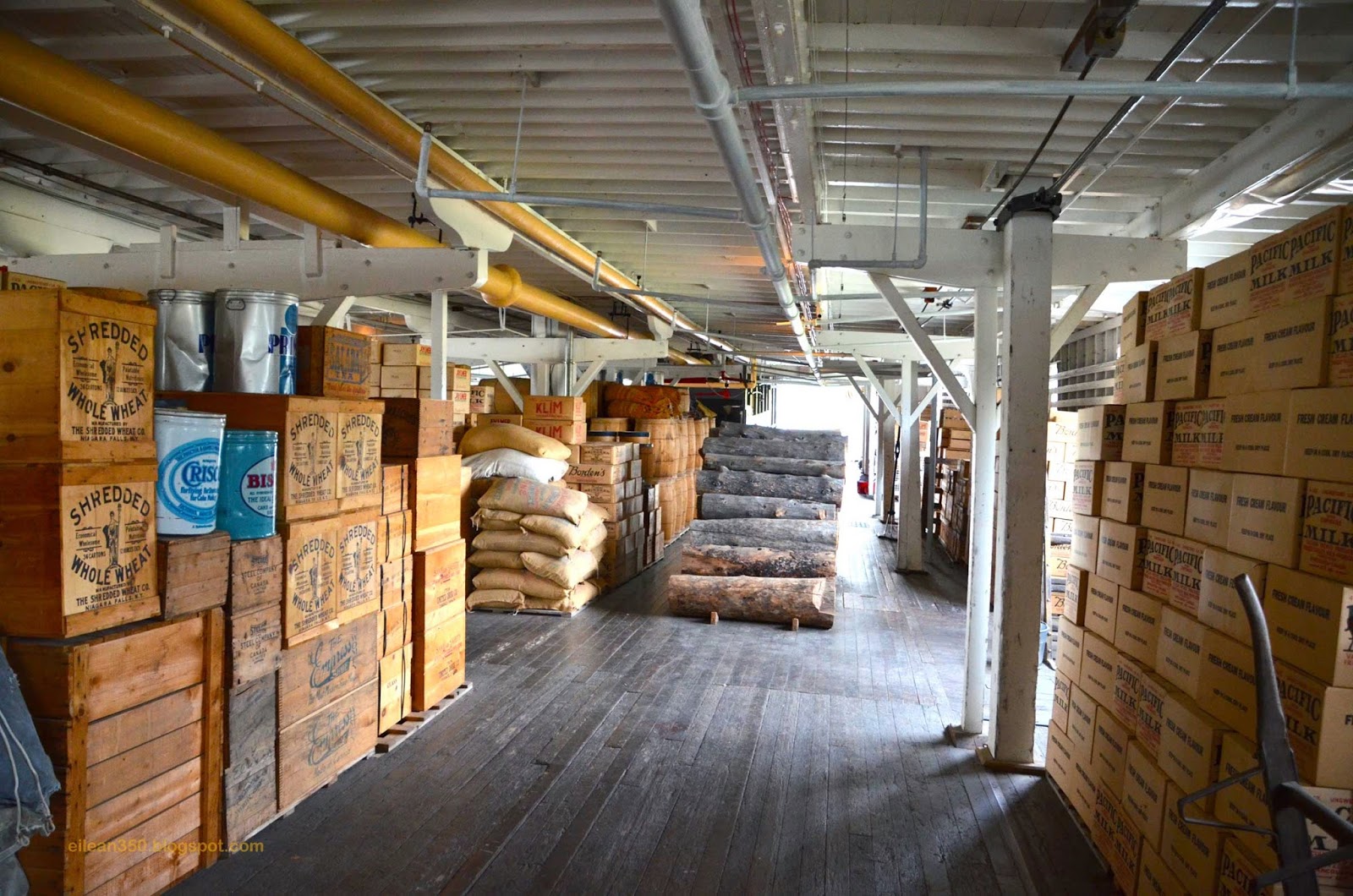 Higher up the parlor was the province of First Class Passengers and Officers. 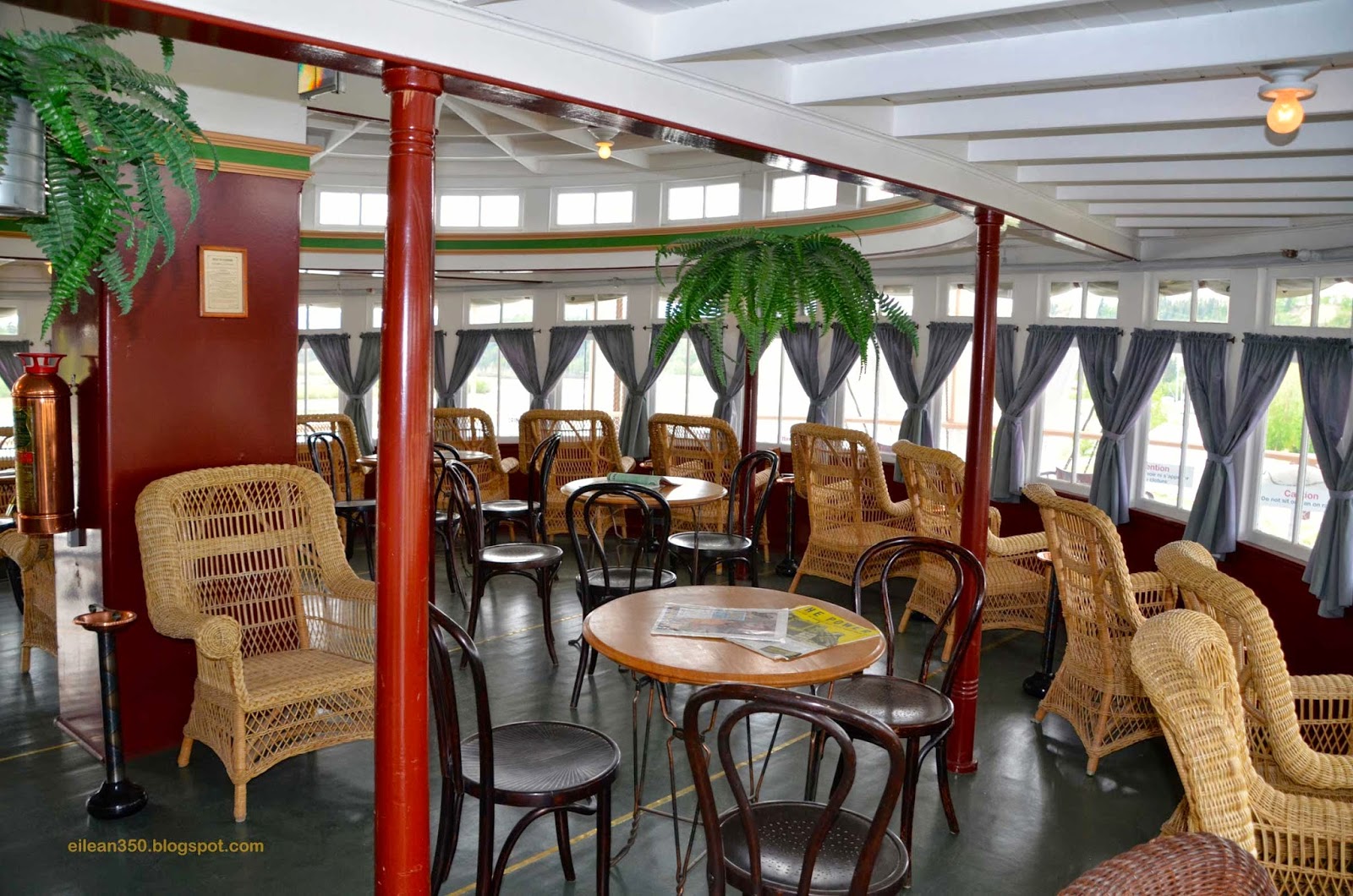 The Klondike could accommodate up to 32 1st Class Passengers which
would necessitate two seatings for meals.
The menus were quite extensive. 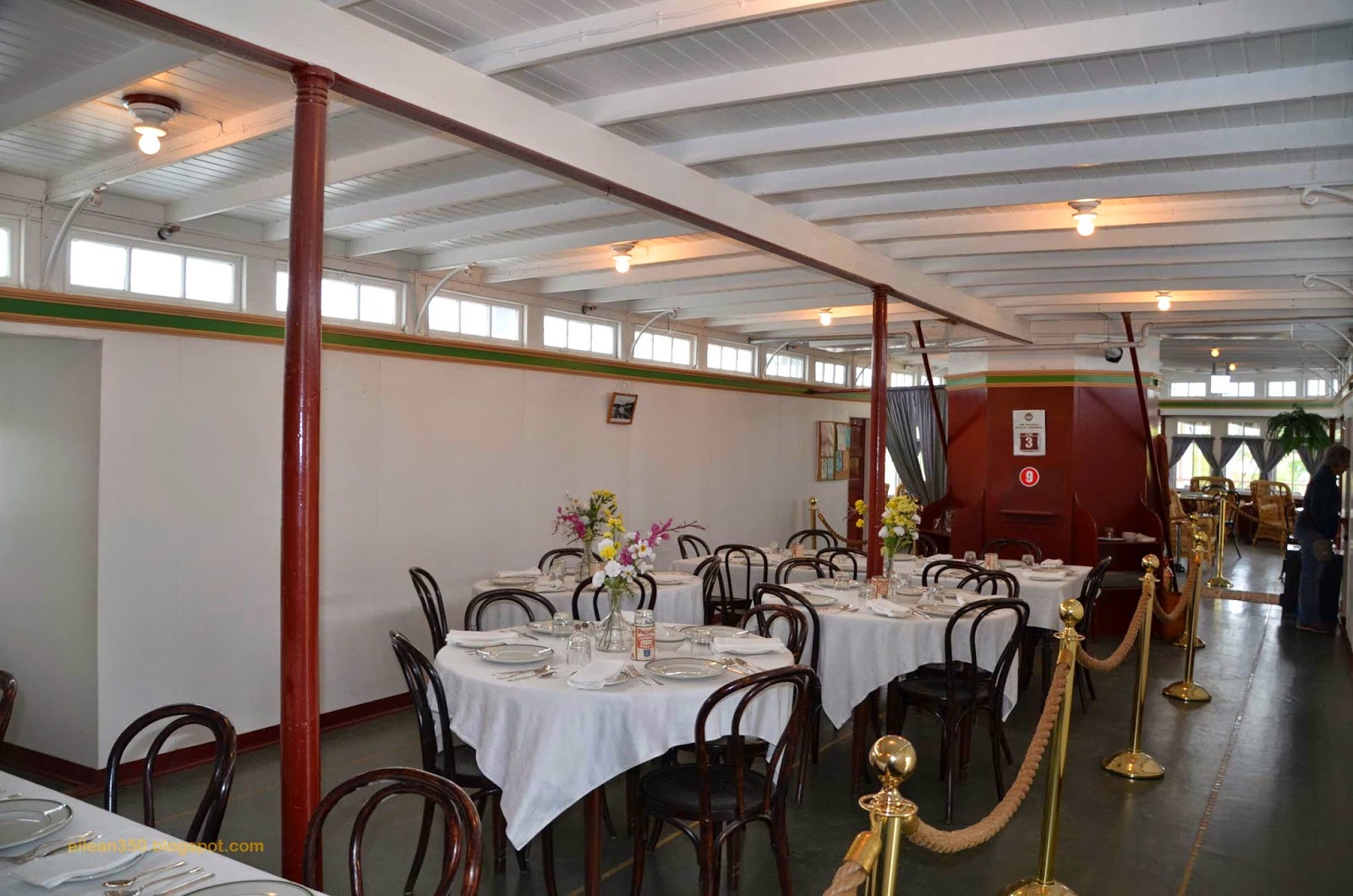 The immediate serving station off of the galley (kitchen) 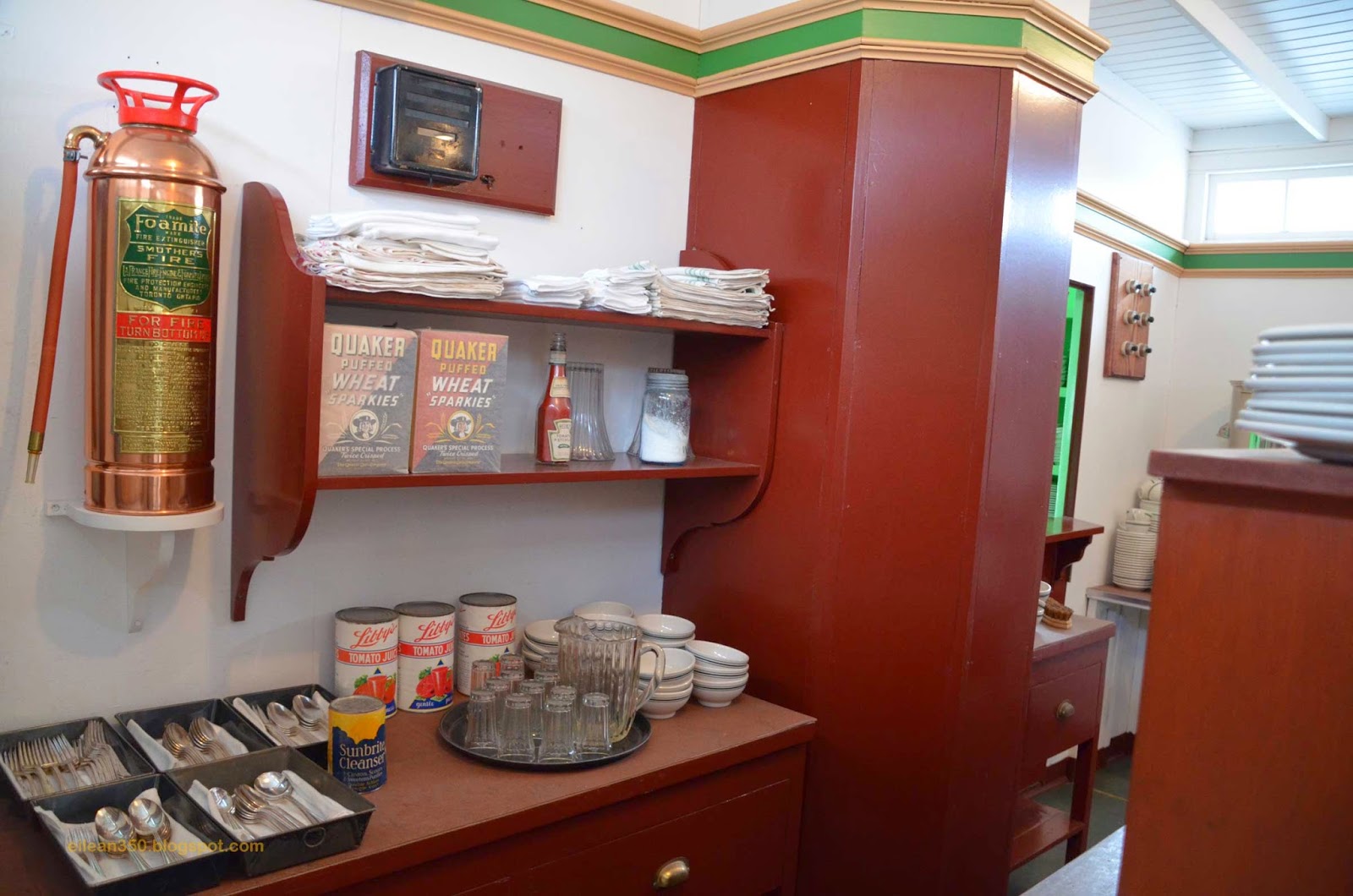 The galley.
An extensive 3 meal per day menu was served from this compartment. 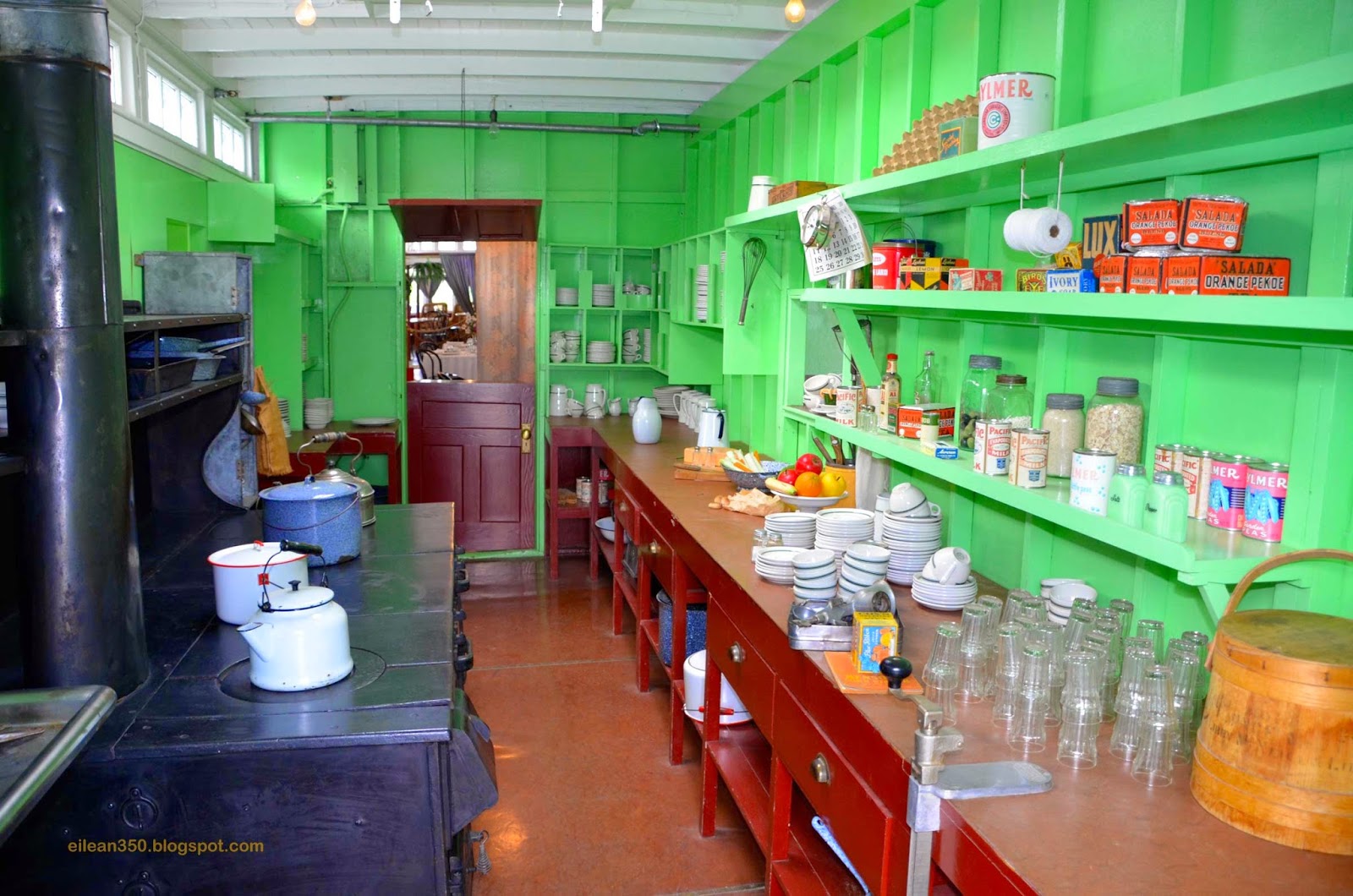 The pilot house was located high and up front affording the pilot an unobstructed
view of the river and potential hazards. 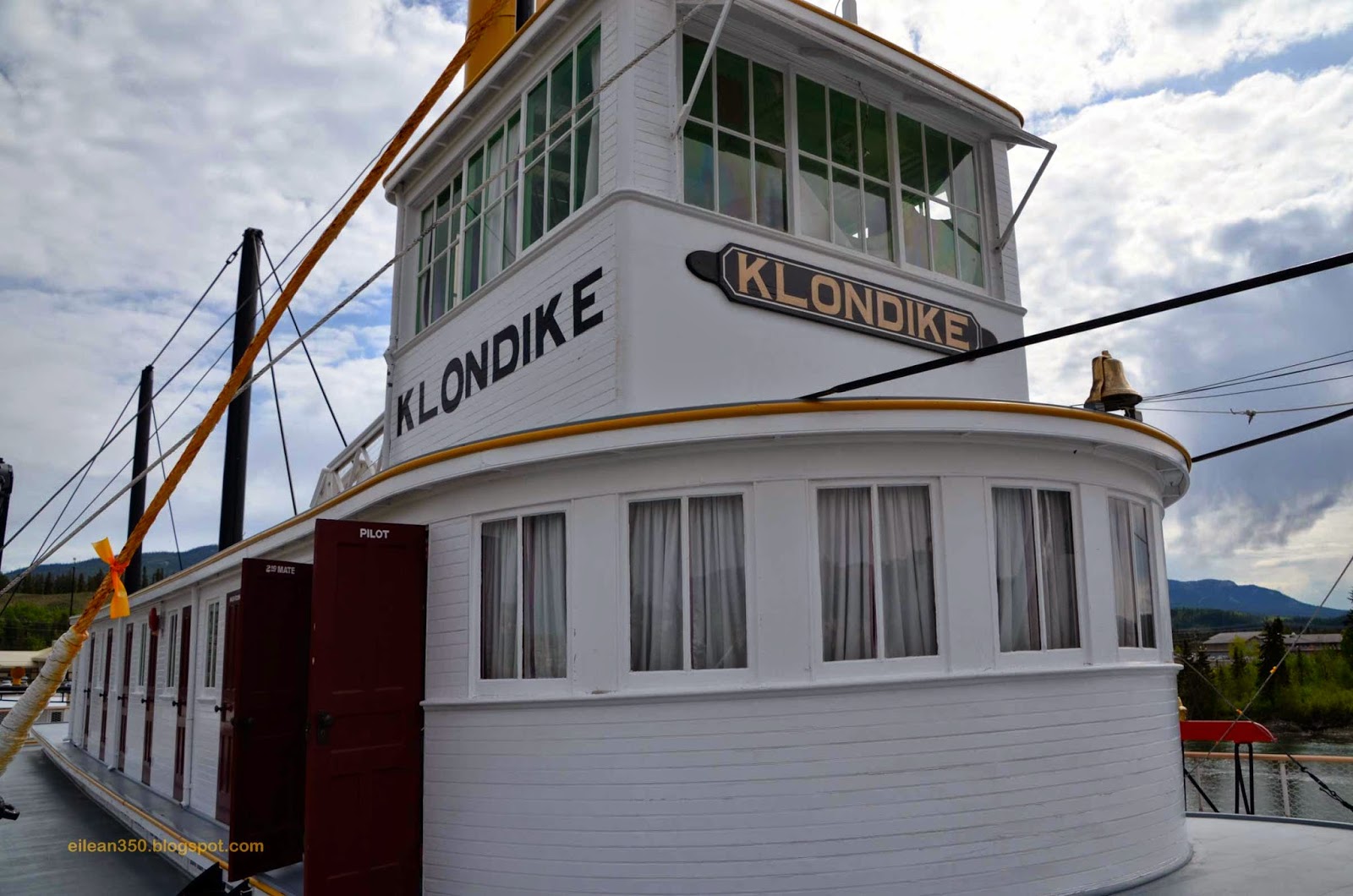 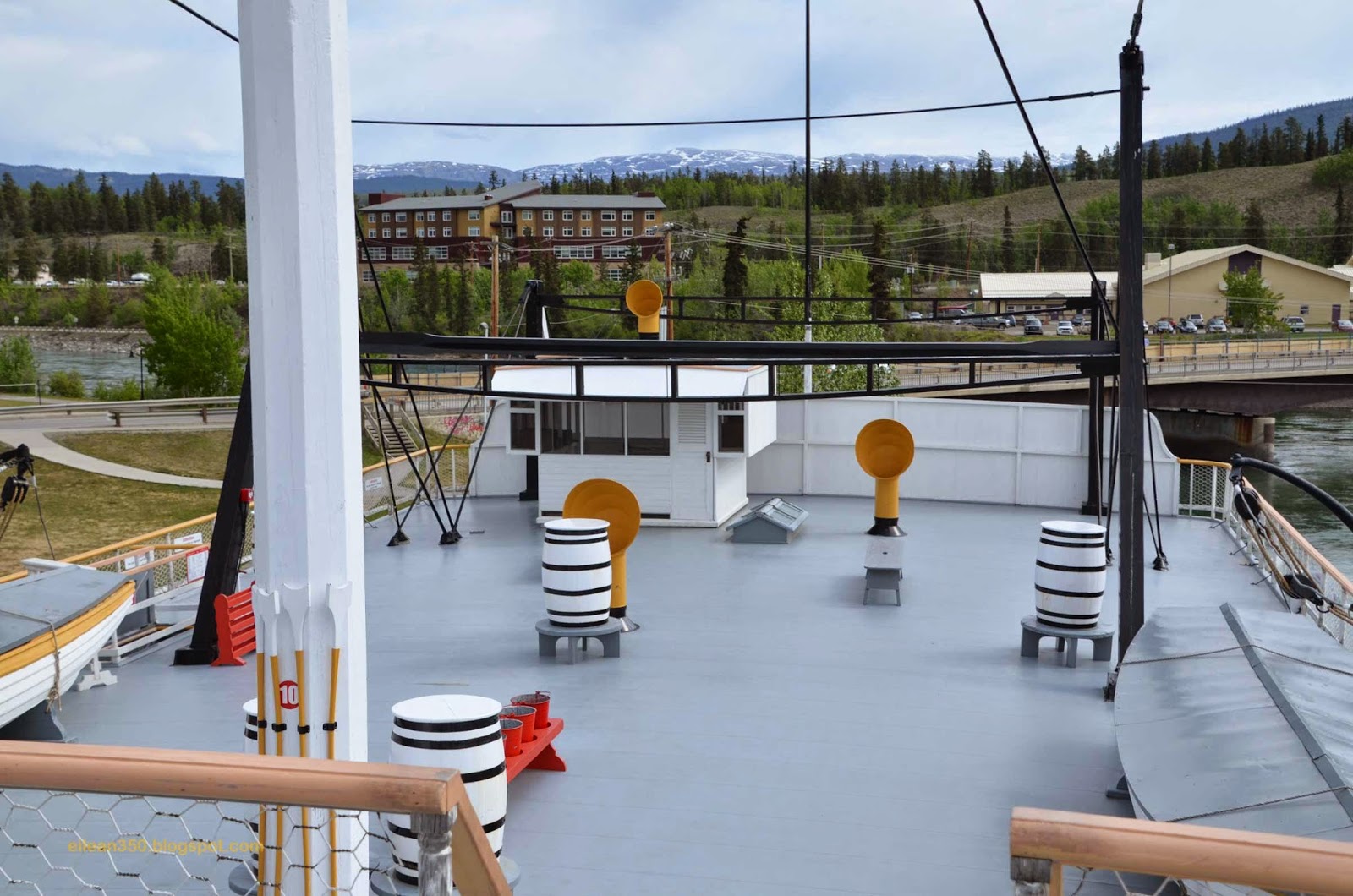 Leonardo di Gregorio up on the bow...
"I'm the king of the world" 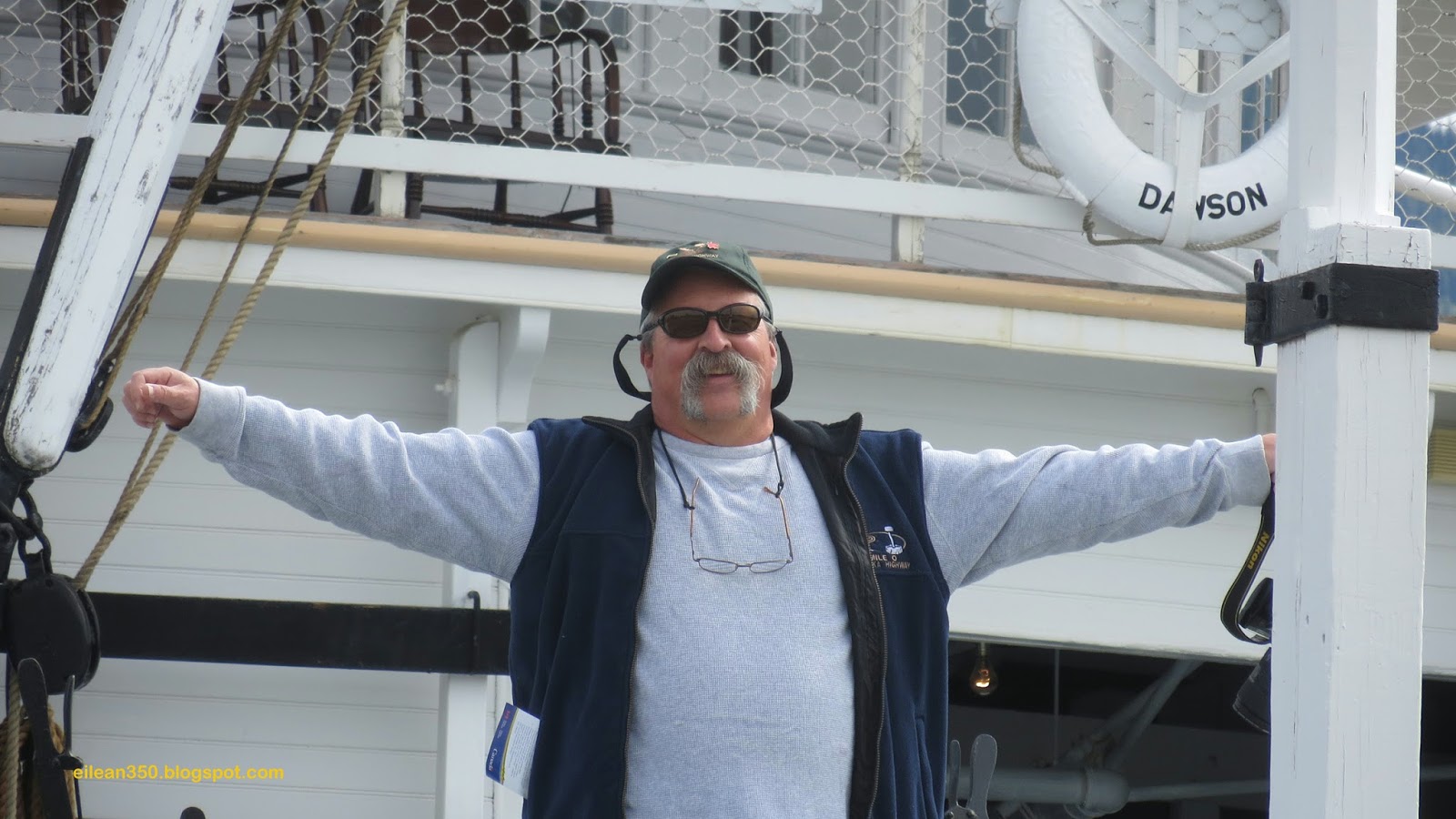 After touring the Klondike we walked a few blocks downtown for lunch then
Kate and Maxine did some shopping.

We took care of some business then on the way home swung by the
Whitehorse international airport.

In front is a full size - real DC3 that is mounted on a pole and is
reportedly the largest operating wind vane in the world.

This particular plane began life as a US Army C47 which was the workhorse of WWII.
It then did service for years in the Yukon before retiring and being left to decay.

An aviation enthusasist saved it and community efforts restored and placed it here,
in its final resting spot.

It is visible to all traffic that passes by on the Alaska Highway.
If you look closely you will see Kate & Maxine below the aircraft. Of course no days post is complete without our self portrait. 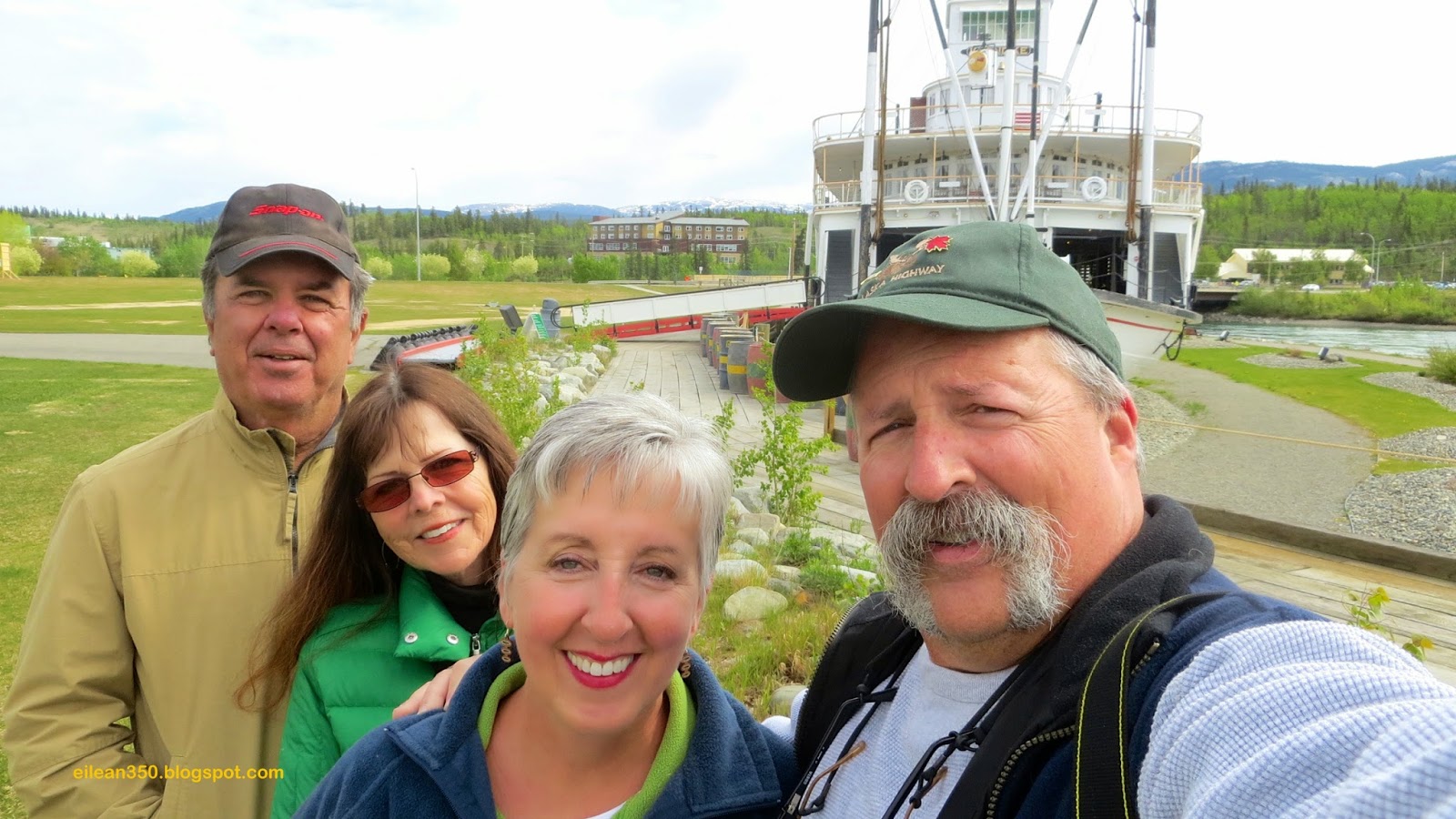 Our plan is one more full day here in Whitehorse, then southeast thru
the coast range on the Klondike highway to Skagway
on the Alaskan Panhandle (and back in the US) for a few days.

After Skagway (which lies on a dead end) its back up the Klondike Highway,
past Whitehorse and North (yes even further north) a few hundred miles
to Dawson City - ground zero for the Klondike gold rush.

Keep checking our interactive map located at the top right side of the blog.
Whenever I have internet (and my app is running)
the points are updated automatically.   Small packets of data are uploaded.
If you click on a map point you will see the time and date we were there.