On Thursday morning we packed up camp and headed south 130 miles on
the Klondike Highway to Skagway Alaska.

Skagway is a town rich in the history of the Klondike Gold Rush as well as
serving as the sea gateway to the Yukon Territory.

Our drive down to Skagway was mind-blowing.
I think I have a new favorite road to drive.
Every turn was an "Ohhh" and an  "Ahhh".
The CB radio was continuously crackling with comments about this beautiful
sight or the next. 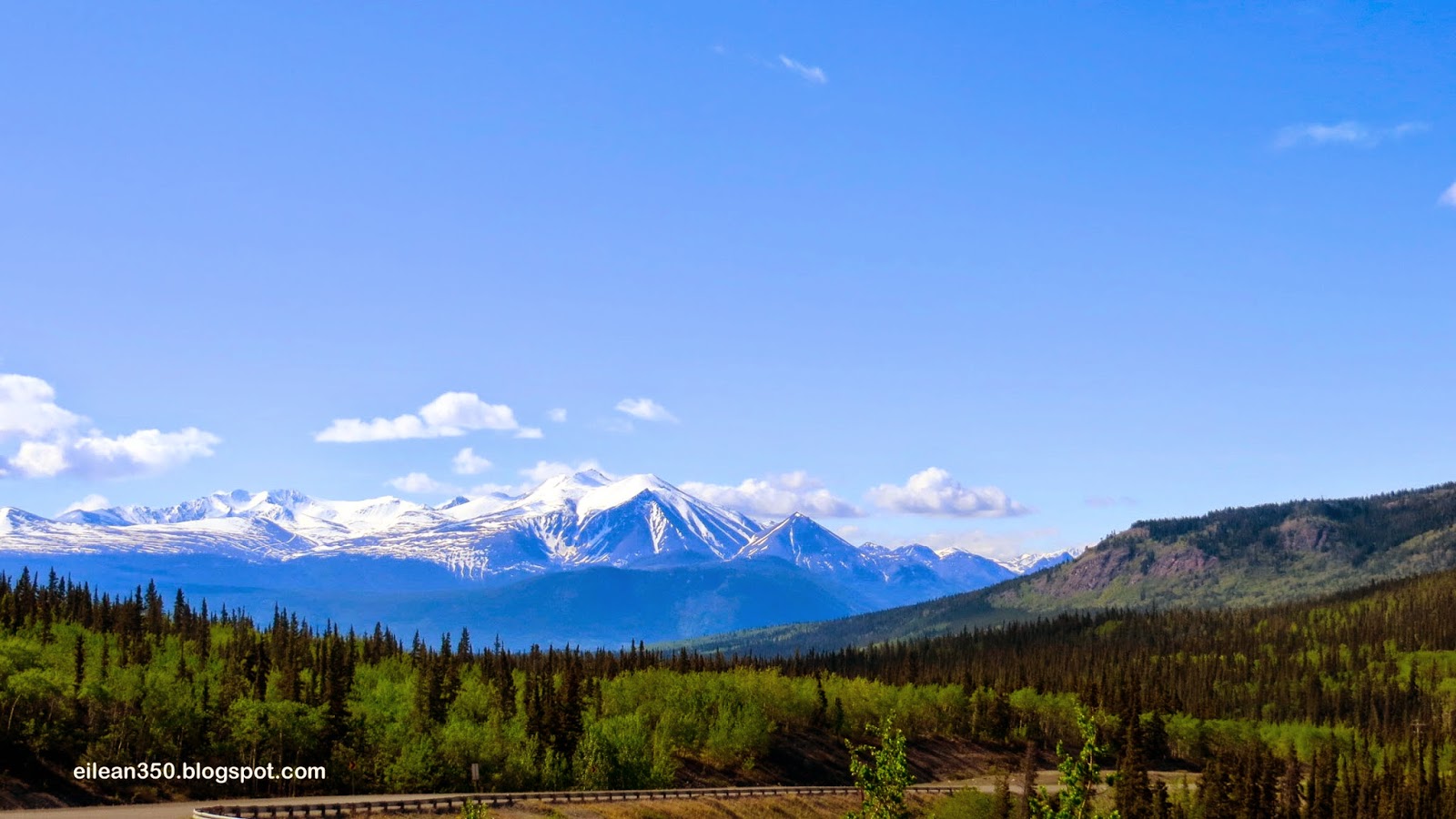 Skagway is located on the Pacific Coast.  To get there from the Yukon
one must cross thru the Coastal Range of mountains that block the path to/from
the sea.   For the first hour or so of our drive we had these beautiful snow
covered peaks growing ever larger in our windshields.

At the halfway point we entered the eastern foothills and the most beautiful
chain of lakes....  It seemed like we were in Norwegian Fjiords.

It was in this chain of lakes - the headwaters of the great Yukon River- that
the Klondike prospectors, having crossed the coastal
range, now built boats to float the Yukon to either Whitehorse where they would
pick up a steamer.... or perhaps float all the way to Dawson City and the Klondike
Gold Fields - about 500 miles distant from these lakes. 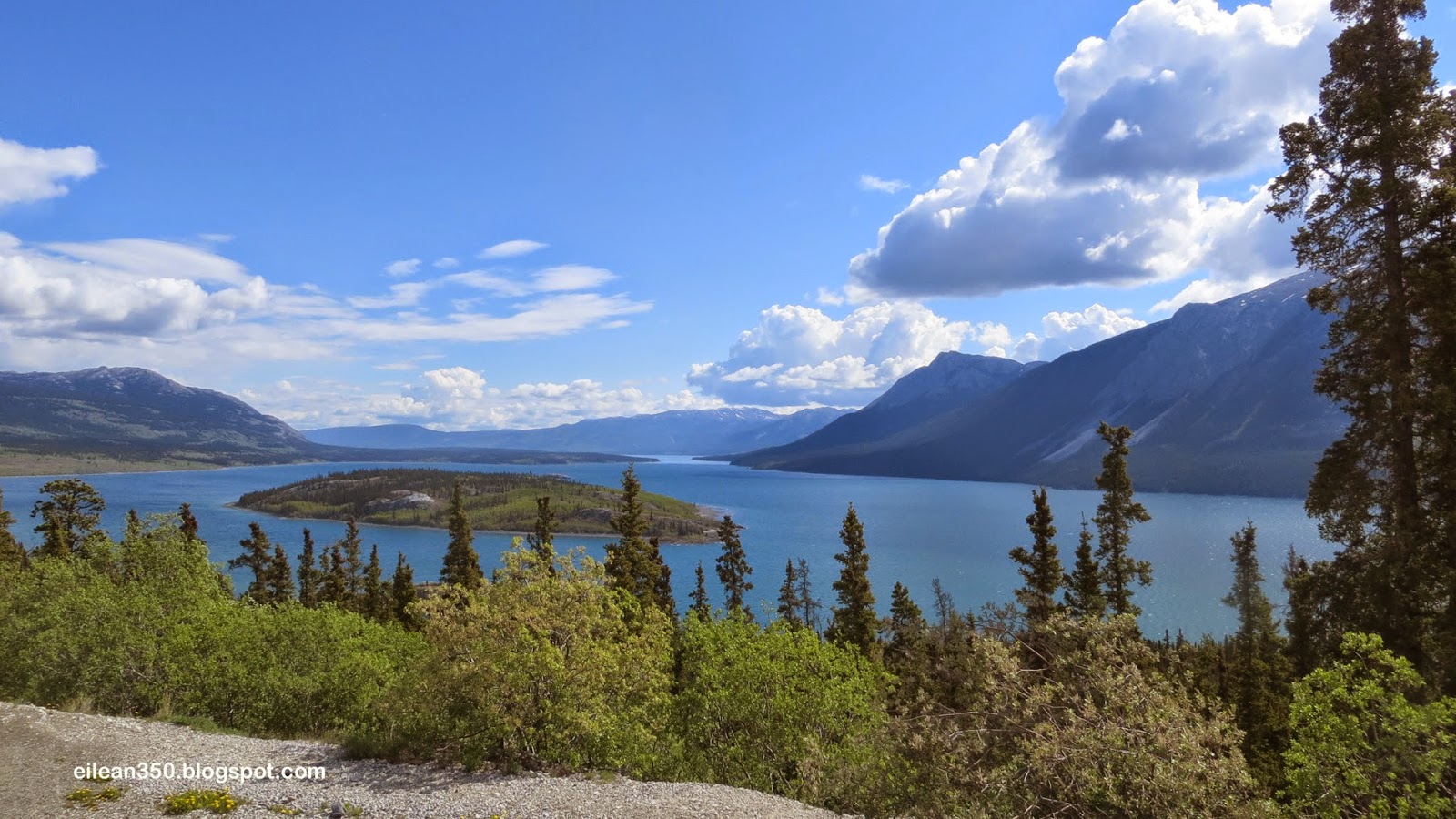 It was here at one of the turnoffs where we posed for this self portrait. 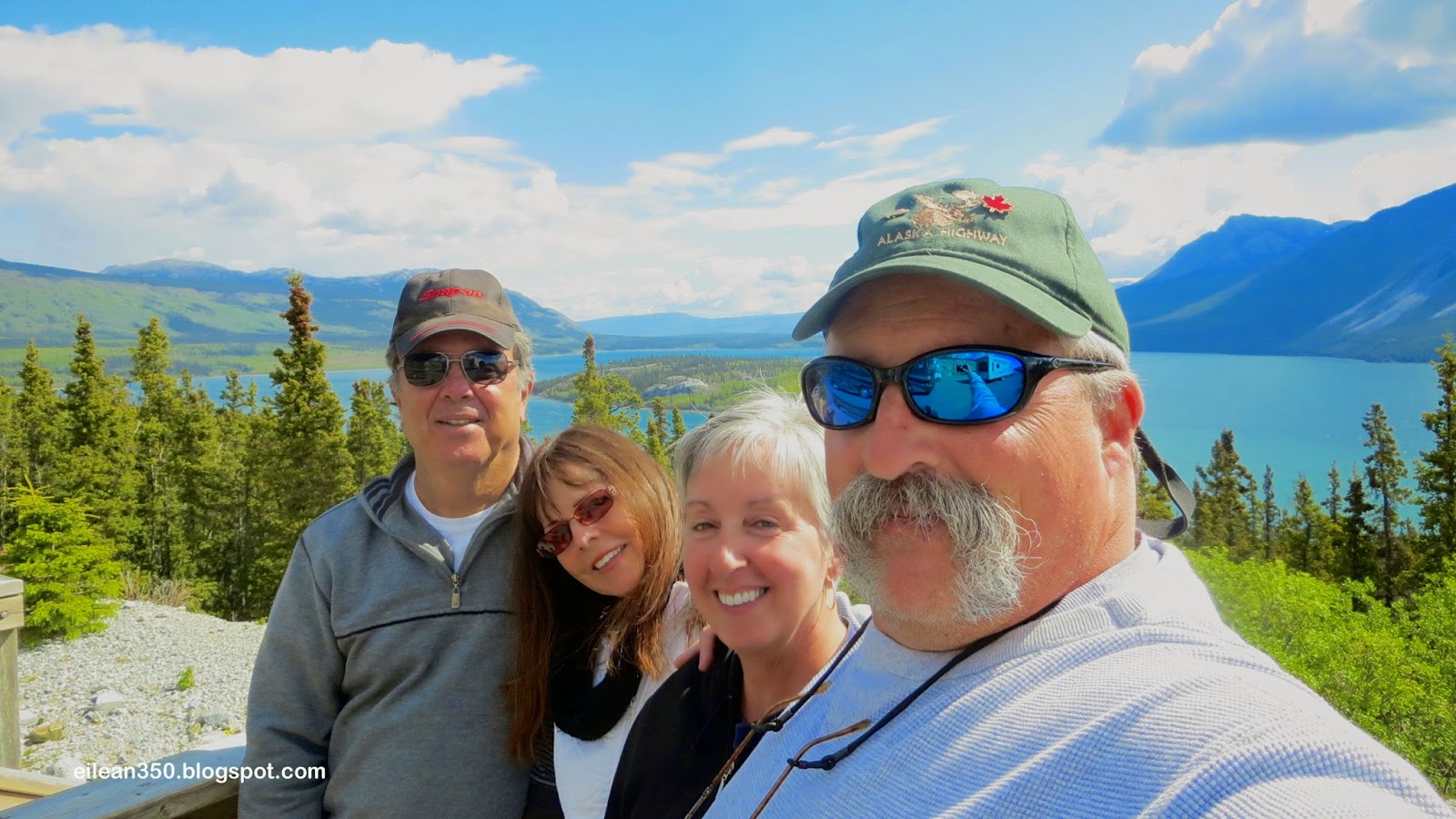 At almost every turnoff we just had to stop and take it in.
The beauty was beyond words.
The weather was picture perfect. 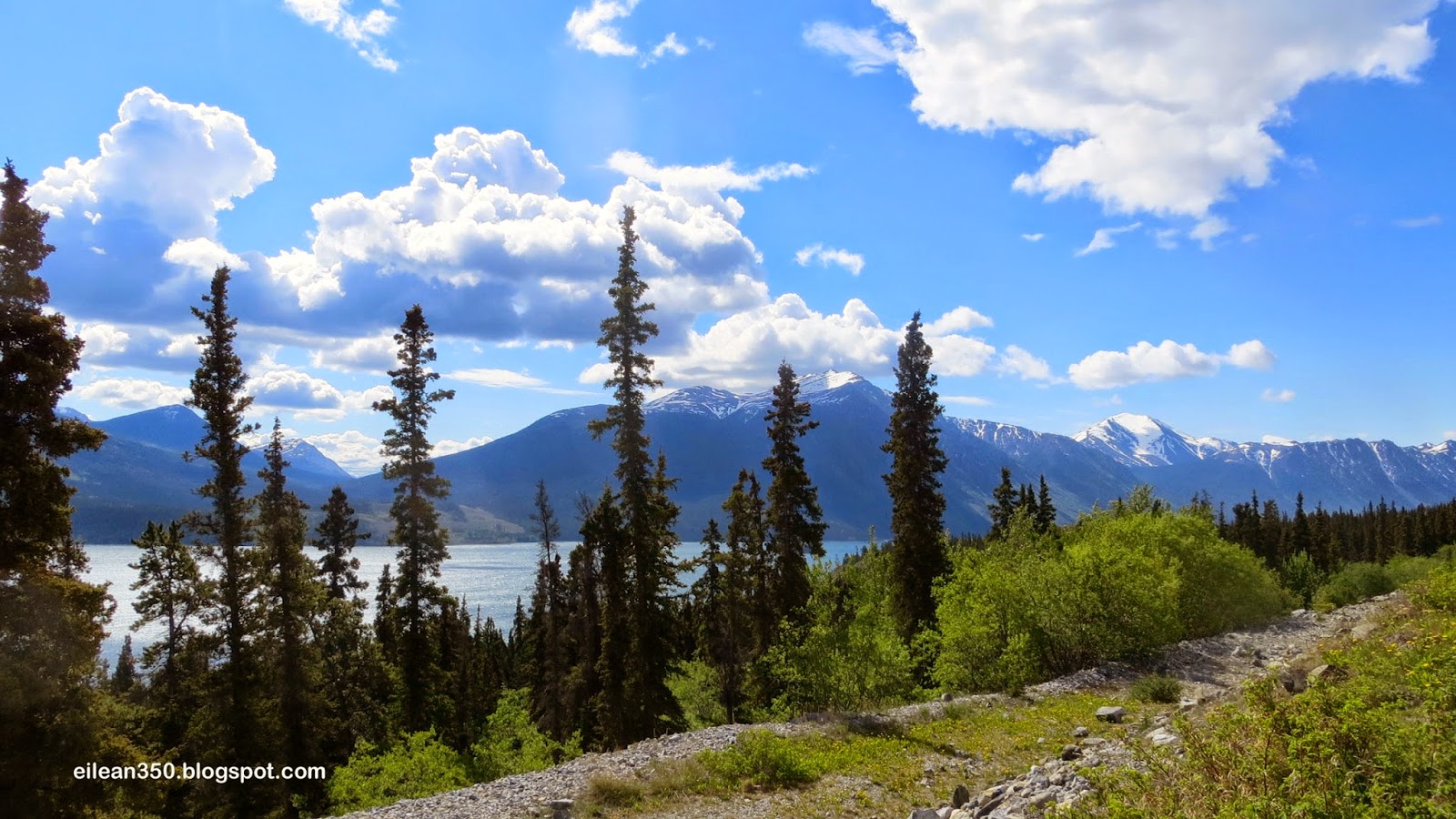 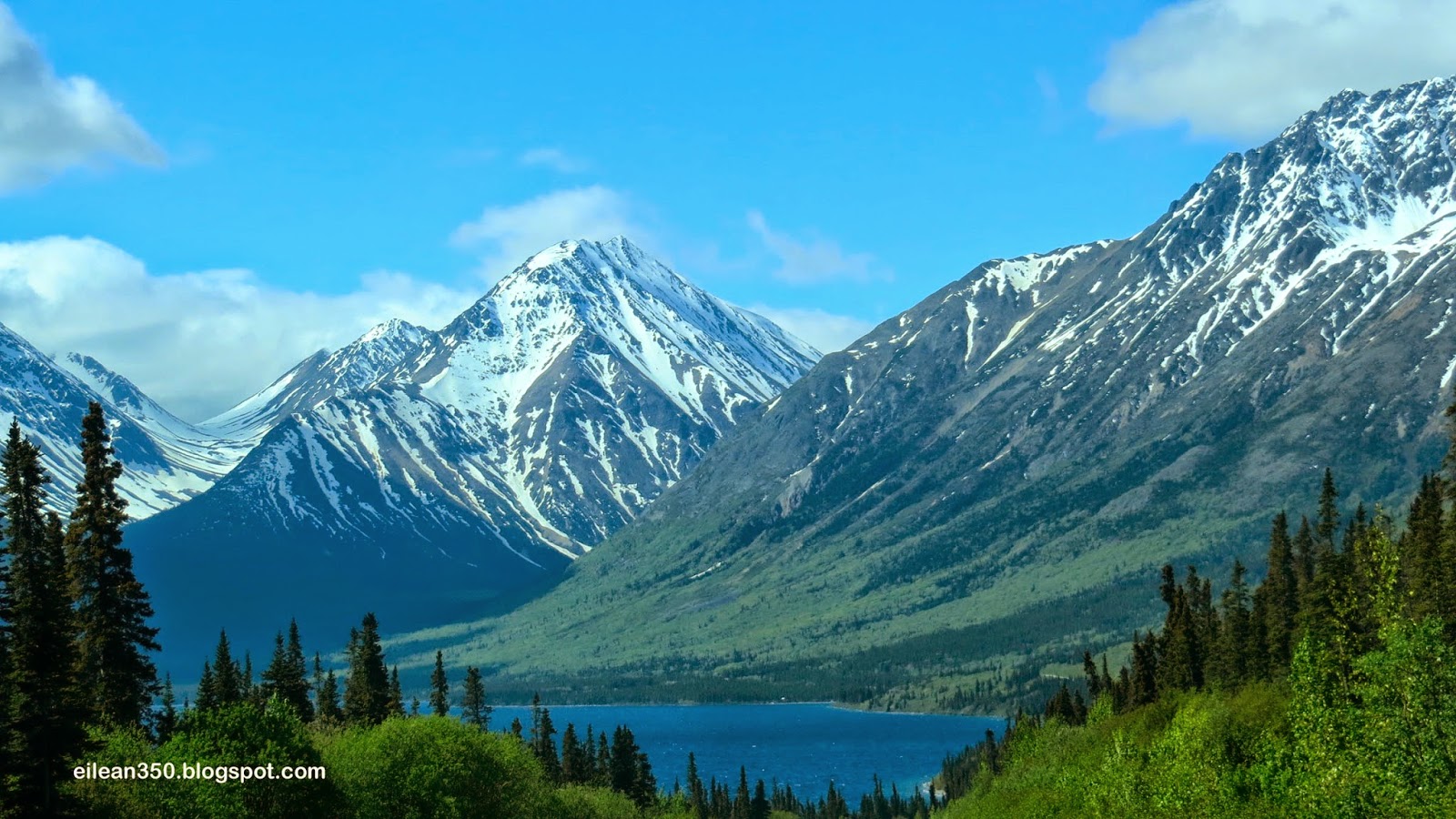 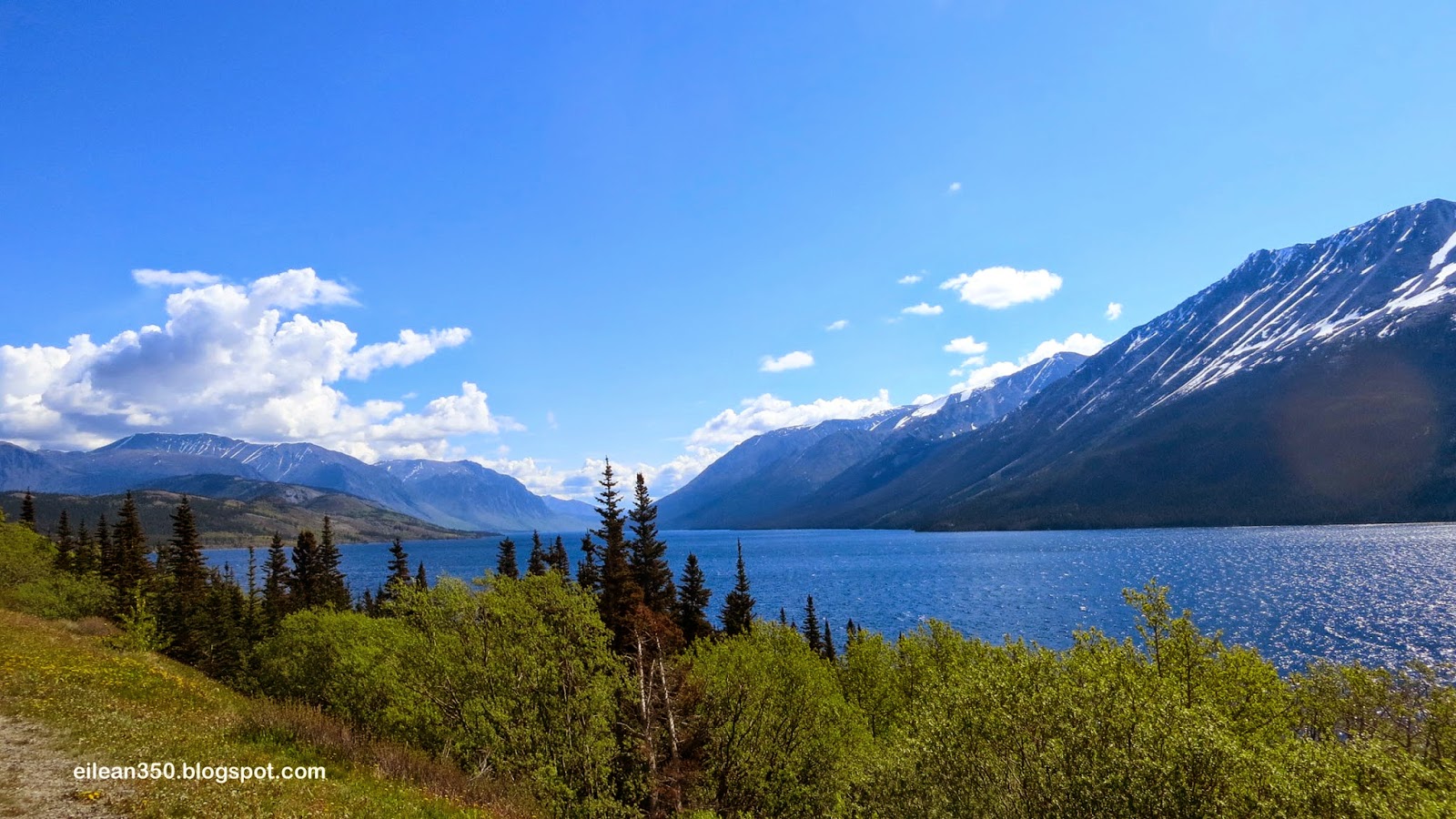 In this last photo of the Klondike Highway - if you notice the clouds
in the distance over the high peaks - that is the pass.  Once you cross there you
drop down about 3200' in a matter of 10 miles or so.

The mountains were not only a barrier to people but also to weather.
The moist air coming in off the Pacific must be forced up and over these mountains.
Too heavy with moisture - the air must lose much of it while making the trip.
Therefore the western side of the mountains receives much more rain than the eastern. 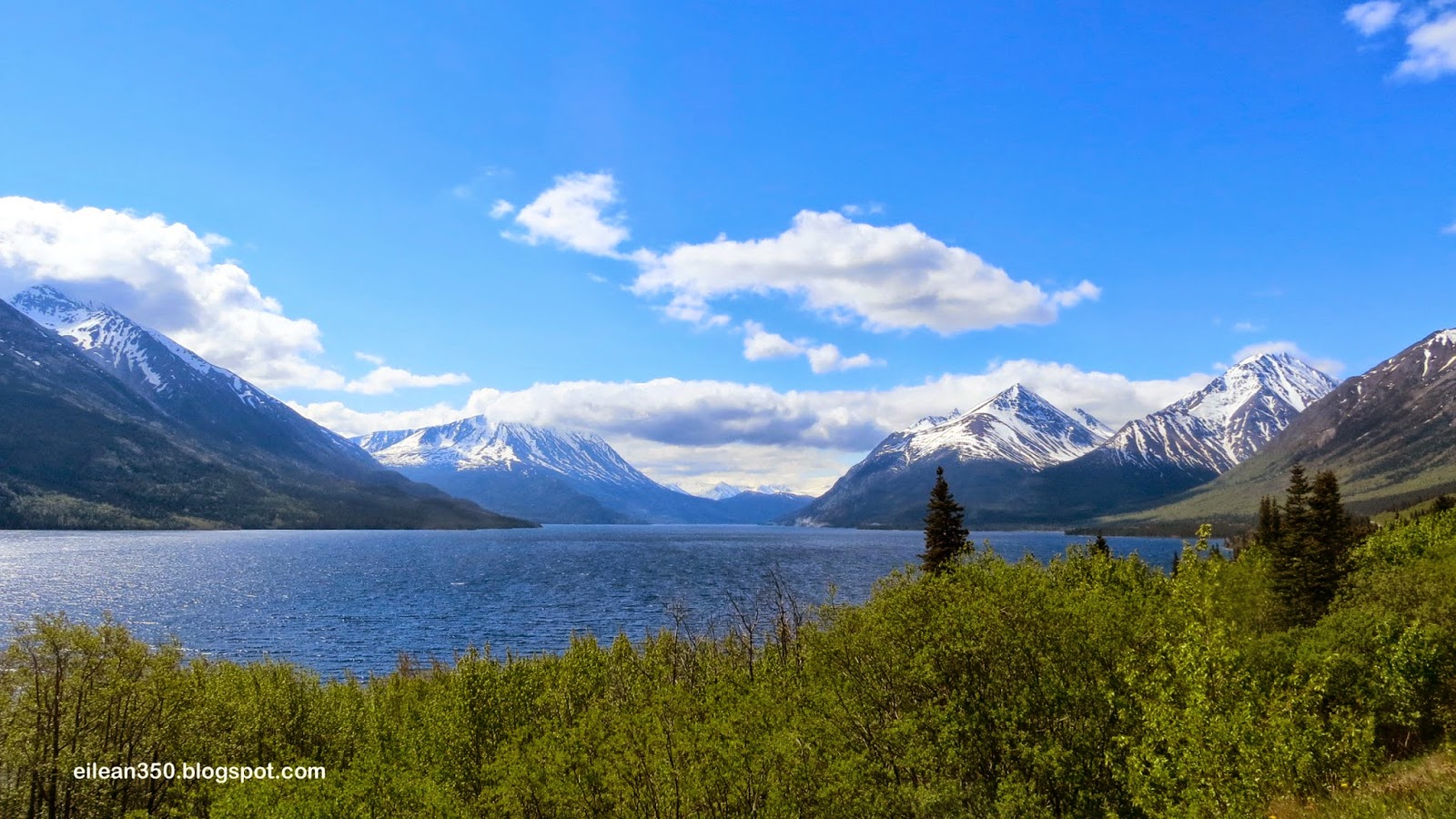 After crossing White Pass, we dropped down the other side into Skagway,
but not before clearing back in thru US Customs.
While clearing customs they would not allow us to bring our fresh tomatoes across
the border....  some of the nicest tomatoes that we have had in a long long time...
So they were left at the border station.   Kate was kidding with the customs guys saying
"well I guess it will be BLT's for you guys today for lunch"

We said good bye to our nice ripe tomatoes and headed into
Skagway and the Pullen Creek RV Park. 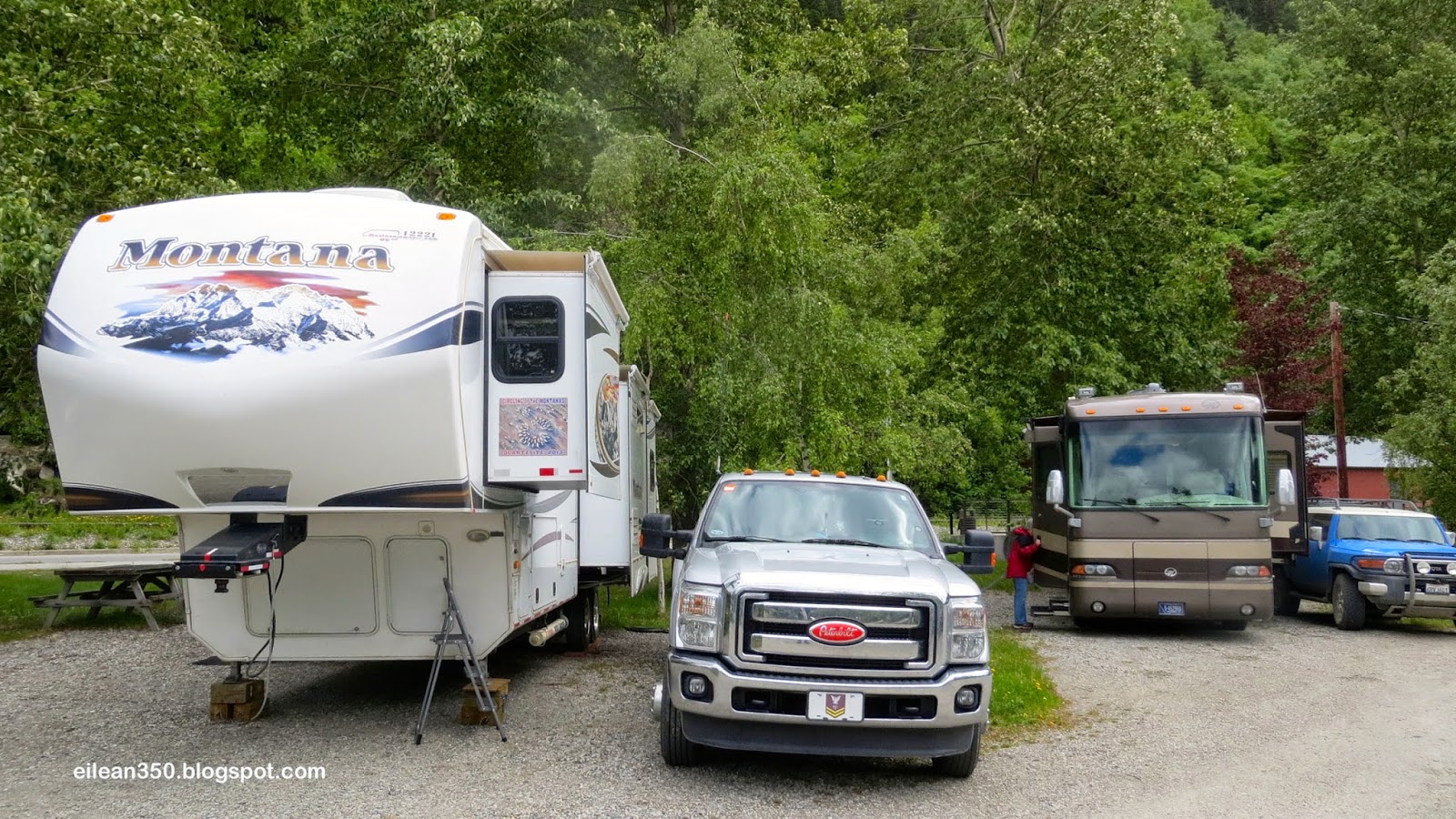 The park is right on the waterfront - only a block from downtown Skagway
and all the tourist venues.   A perfect location.

We have the added pleasure of being backed up to the road that all the
cruise ship passengers walk to and from their ships so we have some really
great people watching opportunities.  Like everywhere - many of the foreign
tourists are interested in our rigs and it leads to many fun conversations.

Today we visited the National Park Visitor center and watched some presentations
on the building of first a foot trail, then horse trail, and eventually a railroad
over the white pass.

The stories of the struggles, and of the thousands of horses that died
making the trek over the pass in a single season really gives one a perspective
of just how easy we have it now a days.

Skagway is a tourist town.  It is a stop on the Cruise Ship Circuit.
So if you are looking for authentic Alaska this is probably not your town.
The cruise ships however do stop here for a reason....
That is because it is a historic town in a beautiful setting, with
a ton of things to do and see. 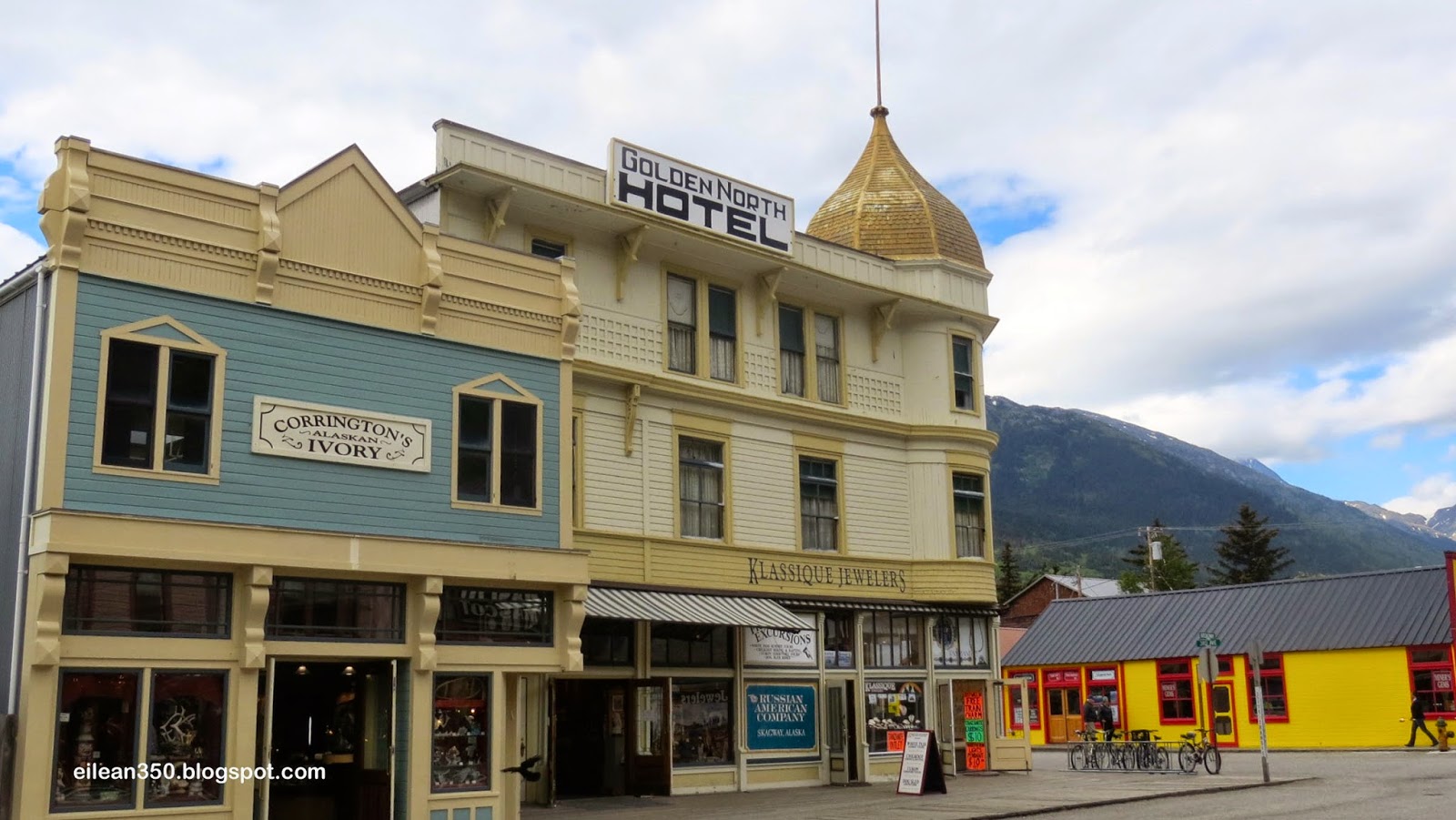 The story of Skagway is the story of the Klondike Gold Rush.
If you are interested in the history and if you intend to trace the prospectors
footsteps up into the Klondike then a stop here is a must as it is from here where they set
off on their long journey. 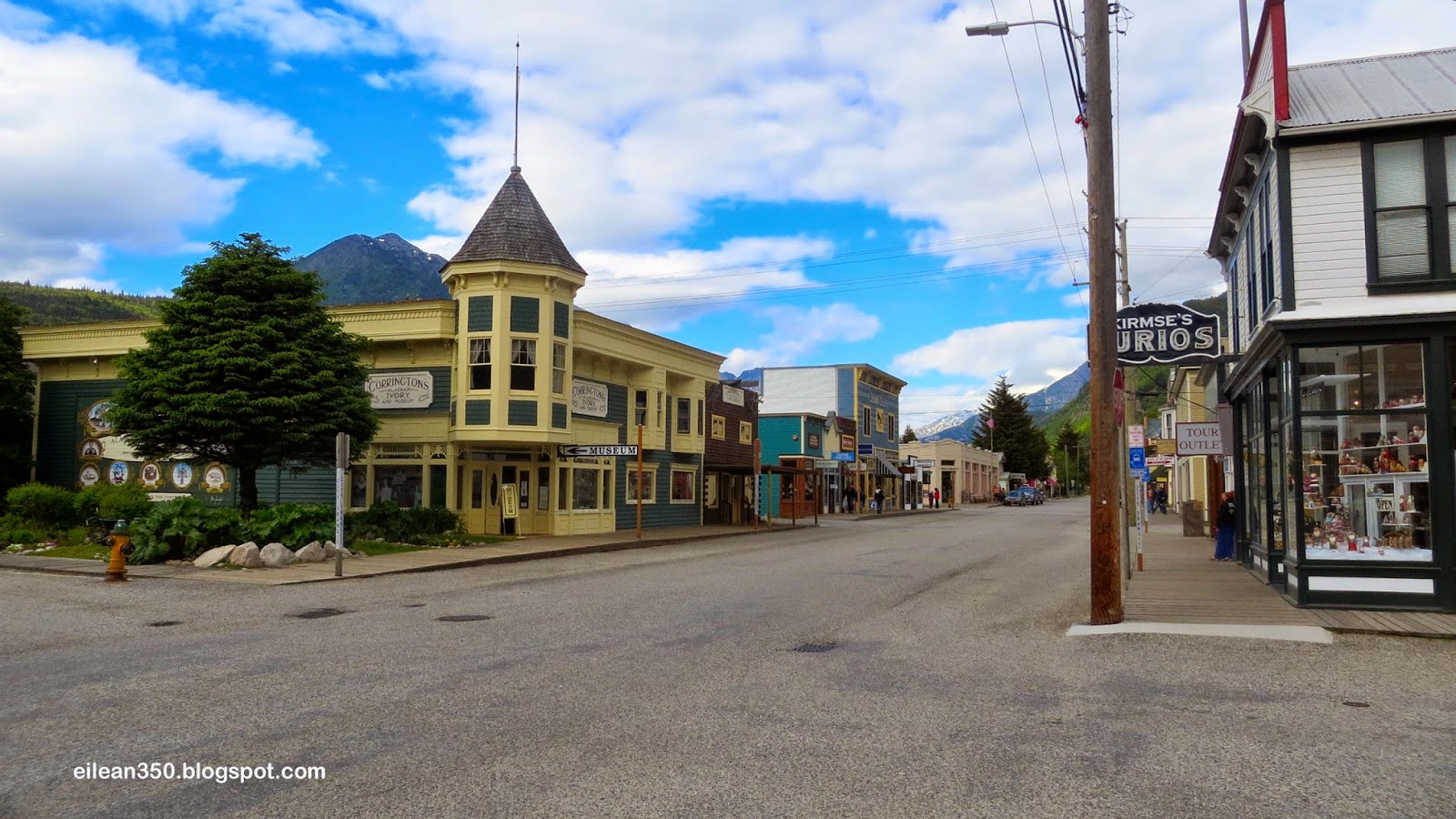 Skagway is headquarters of the Klondike Gold Rush National Historic Park.
The park is jointly administered in unison with our Canadian friends to the north. 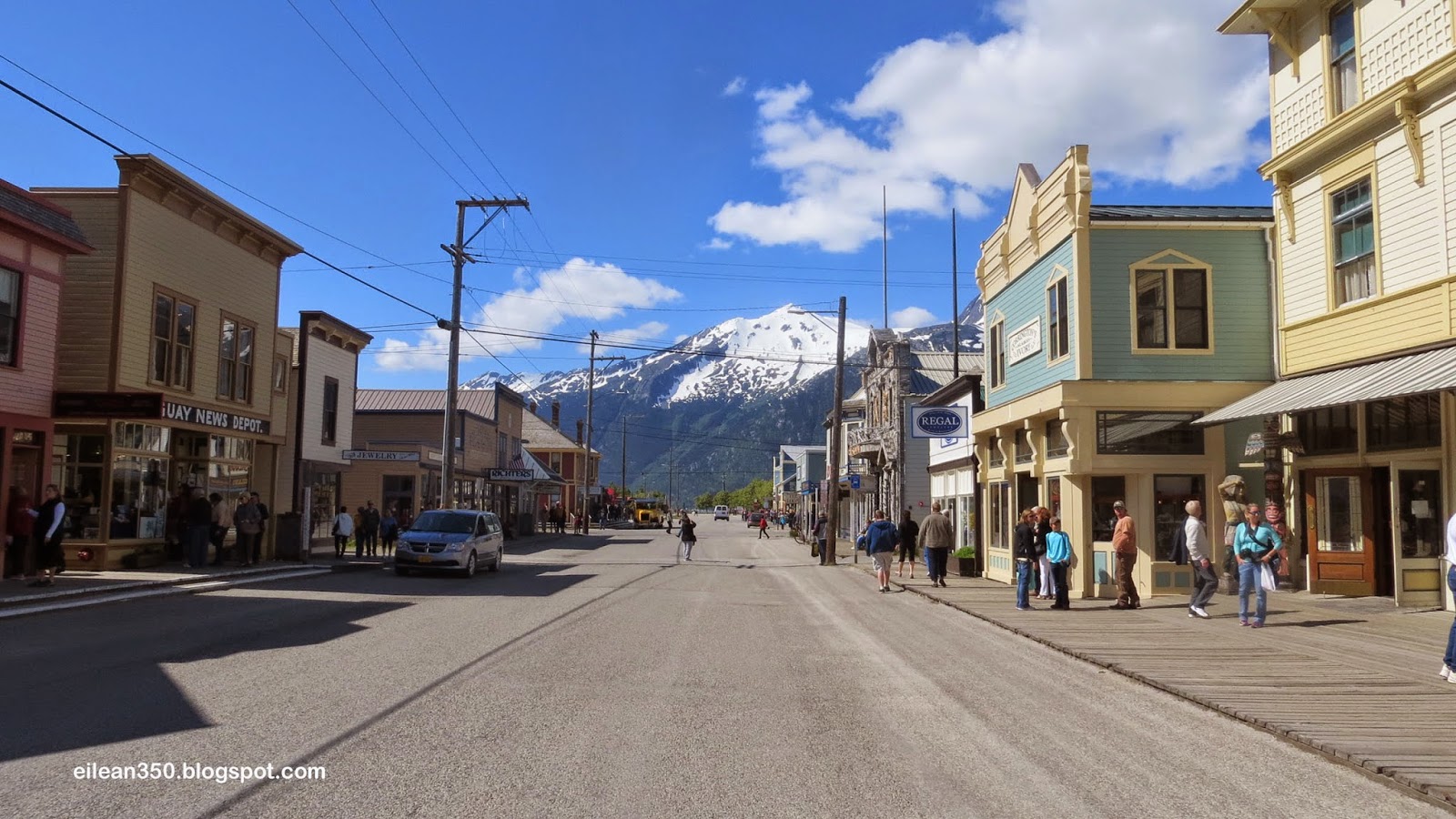 All of the cruise ship passengers that we spoke with told us that Skagway was
their favorite stop.

Later on today we took the White Pass & Yukon Railroad Narrow Guage
Train up to the White Pass Summit and back.  It is a great ride, very beautiful, and traces
the steps that the prospectors make on their harrowing journey over the mountains.

About 5 miles or so up the pass on our journey this is looking back towards the
town of Skagway and the deepwater harbor. 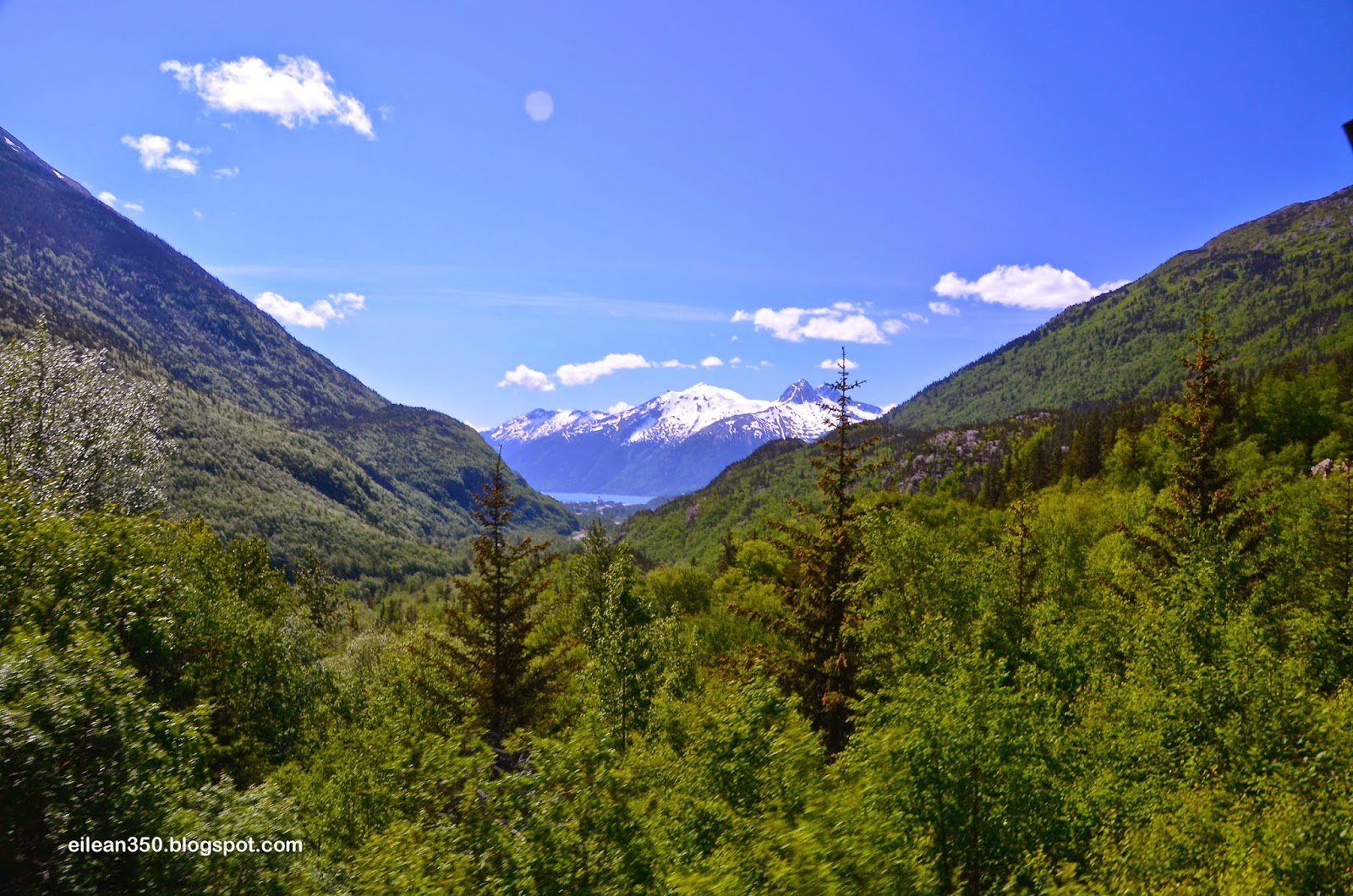 Here is that same picture, but zoomed in with my super duper 300mm
telephoto.   You can see the cruise ships in the harbor.
We are camped right in front of the ship on the left. 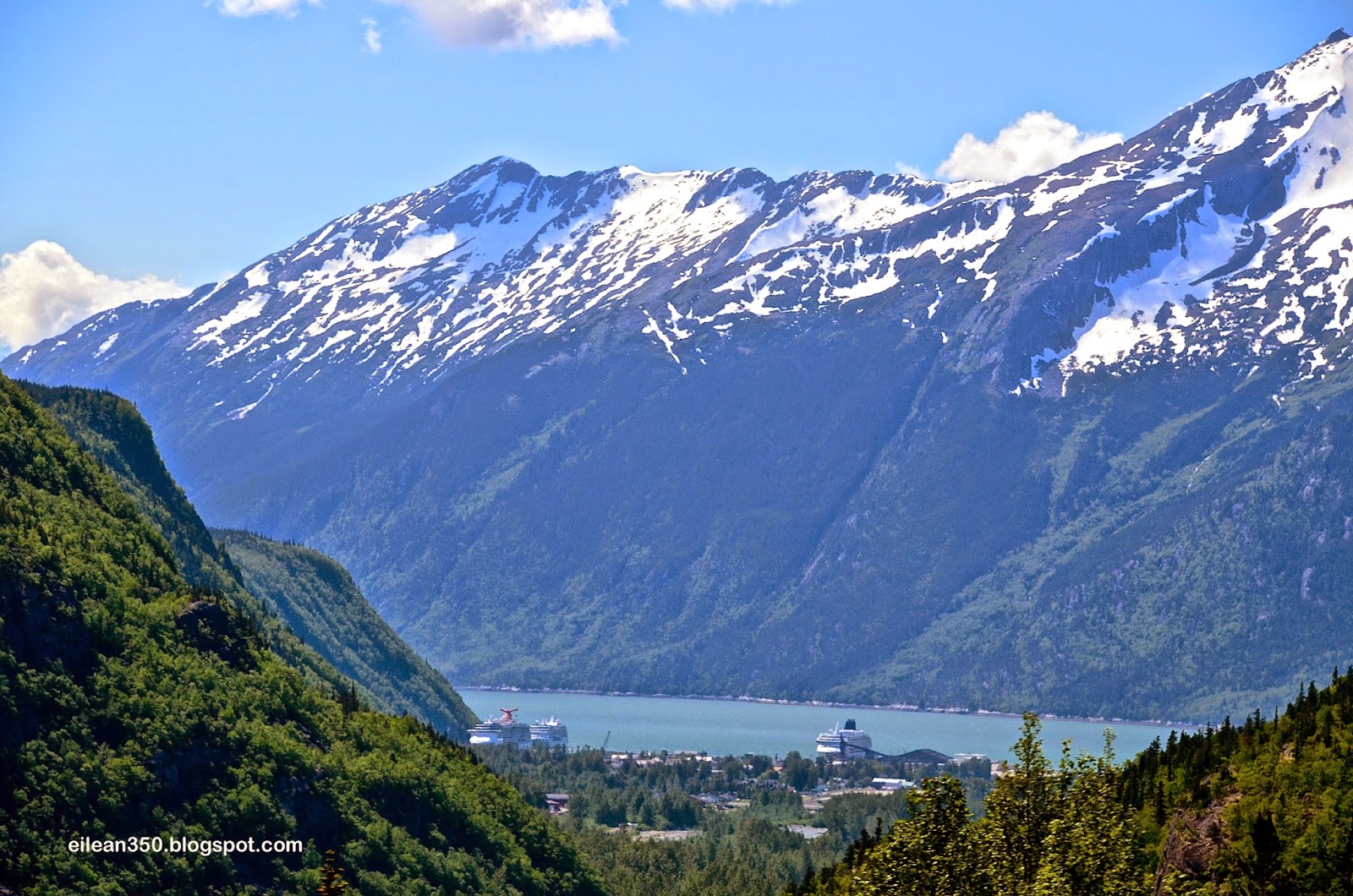 Further up we are looking at some of the higher peaks guarding the pass. 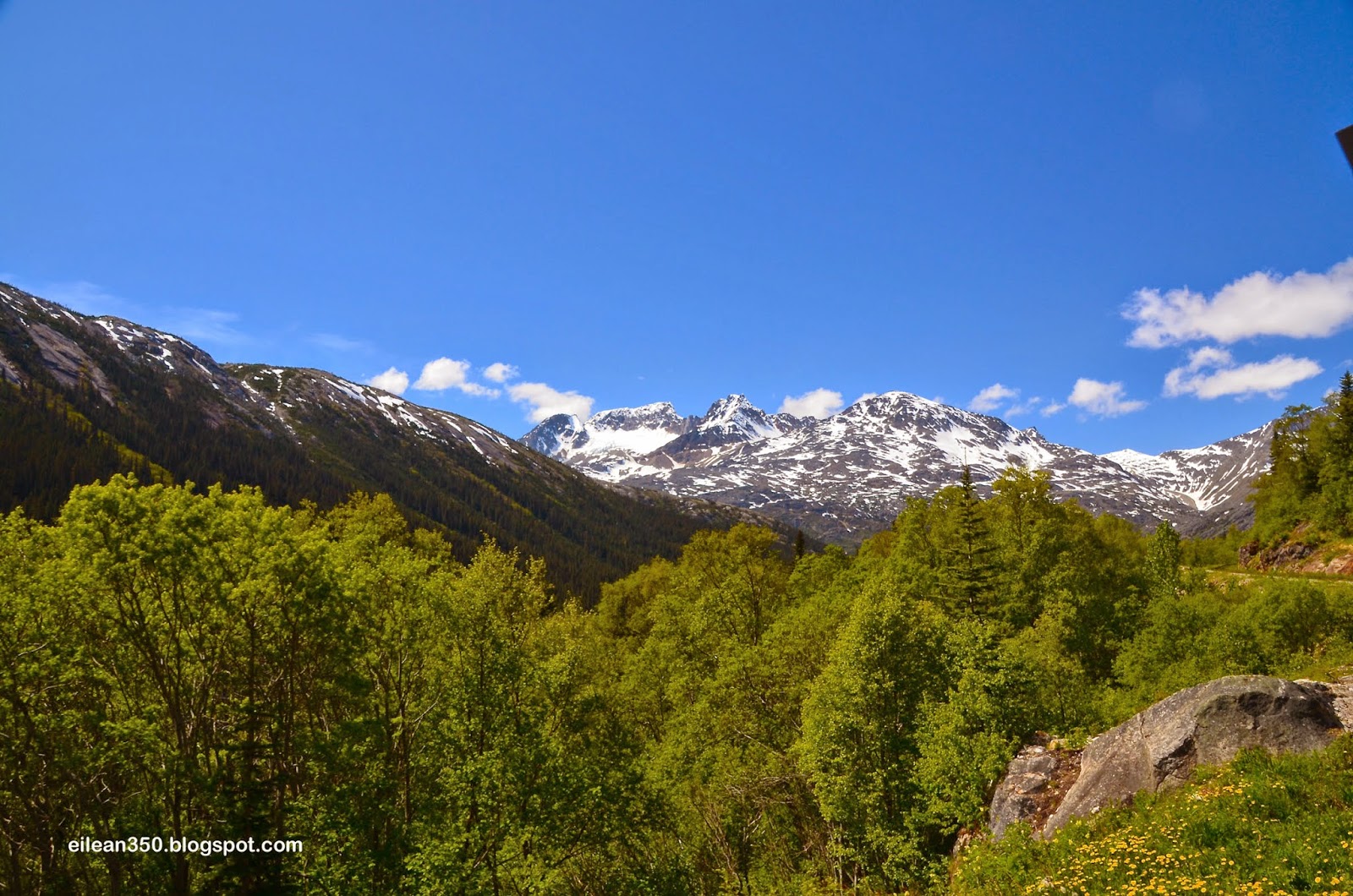 That same mountain - but zoomed in - you can see the Carmacks Glacier. 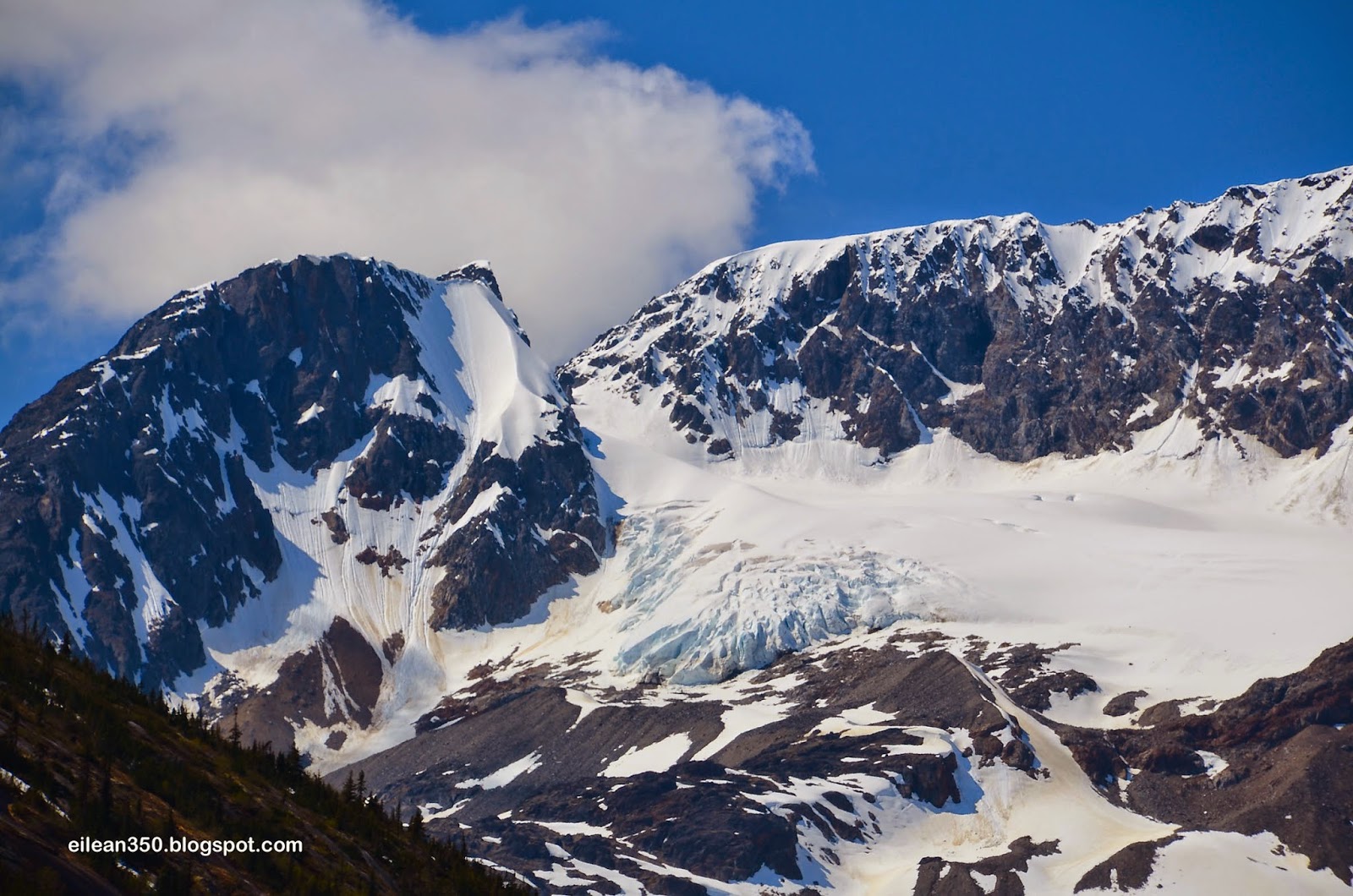 Looking back on the train as it works its way higher and
higher up to the summit. 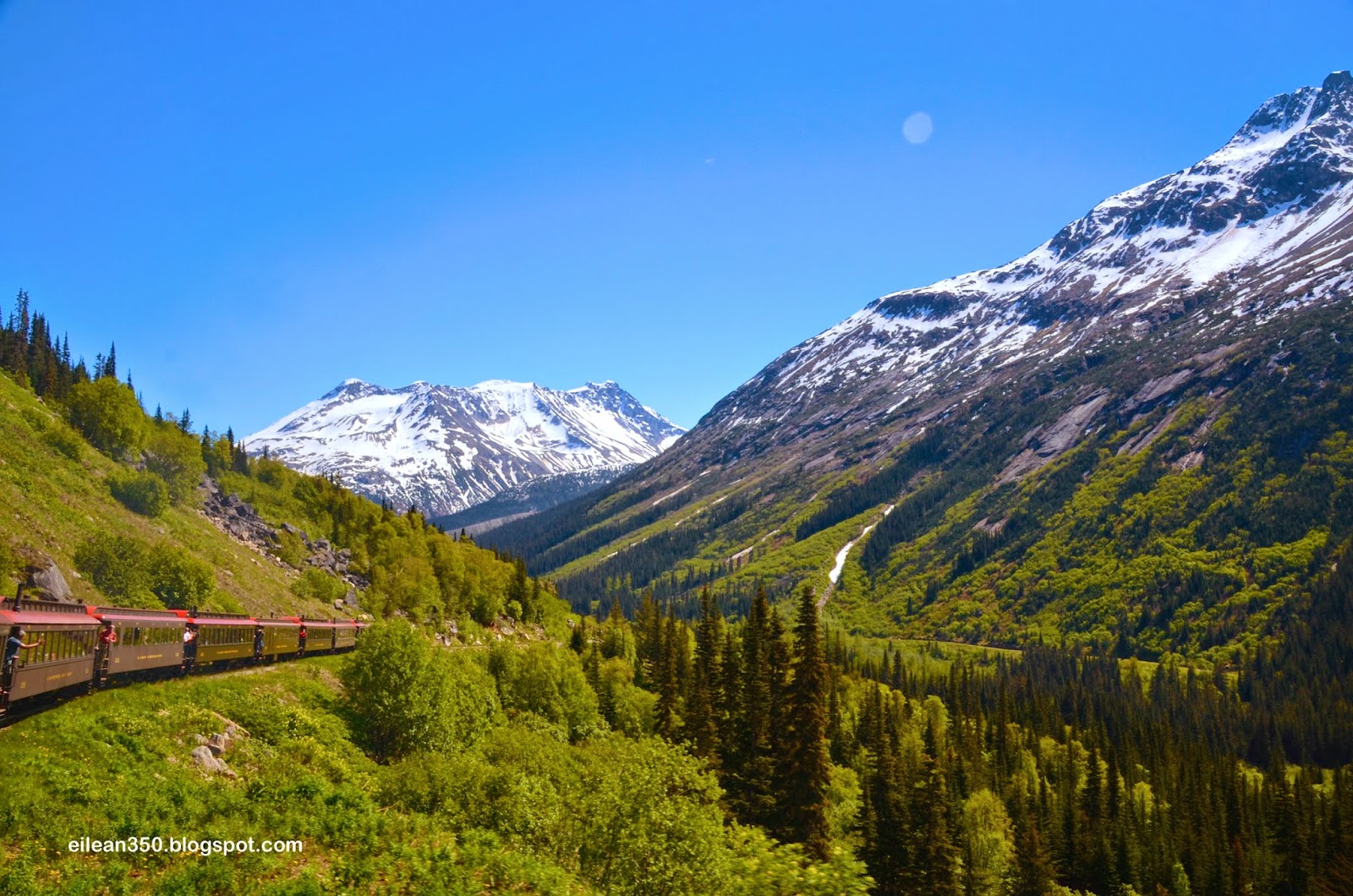 Entering one of two tunnels on the route to the summit. 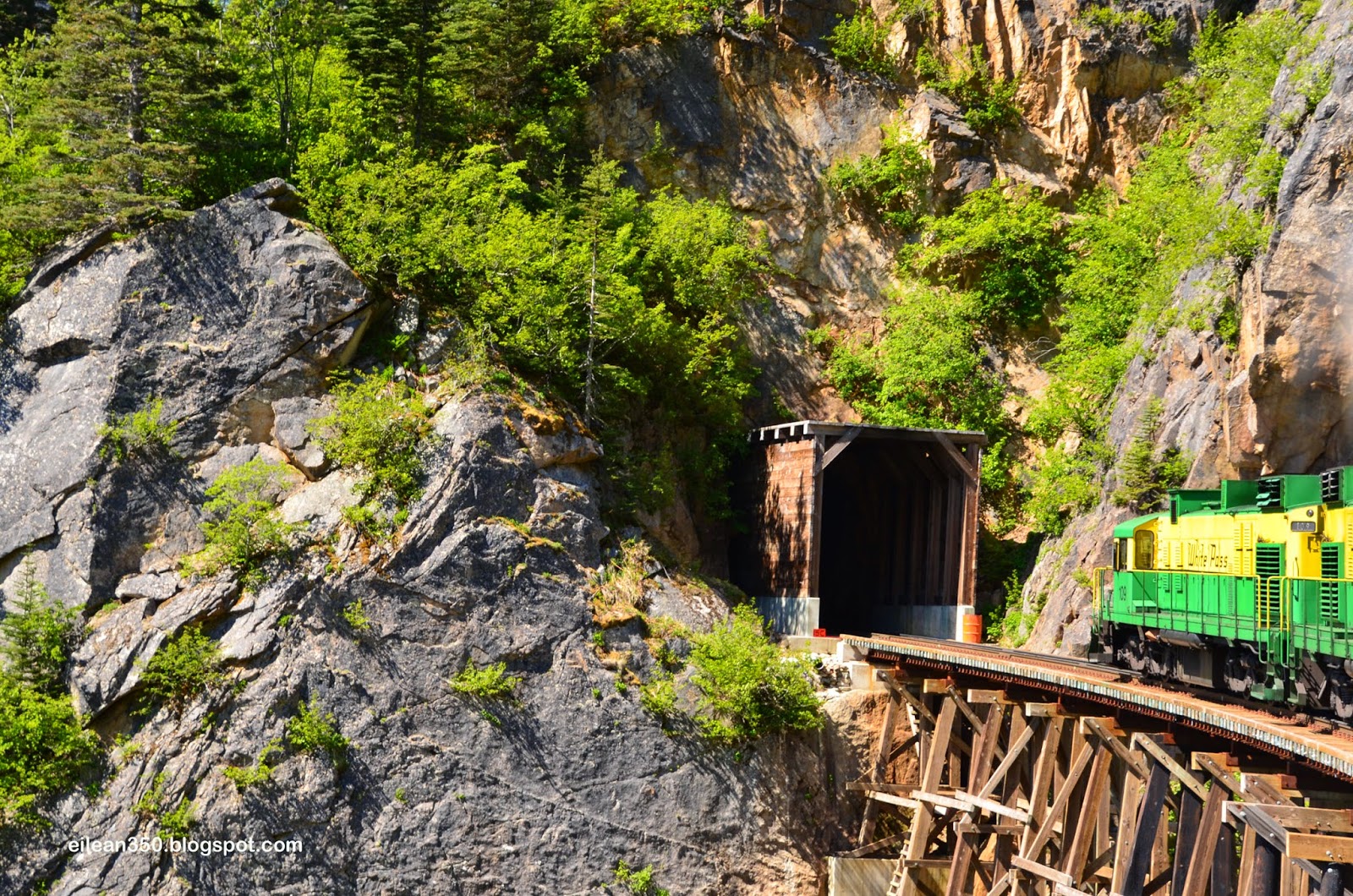 On the left slope you can see another train following us about 2 or 3 miles behind. 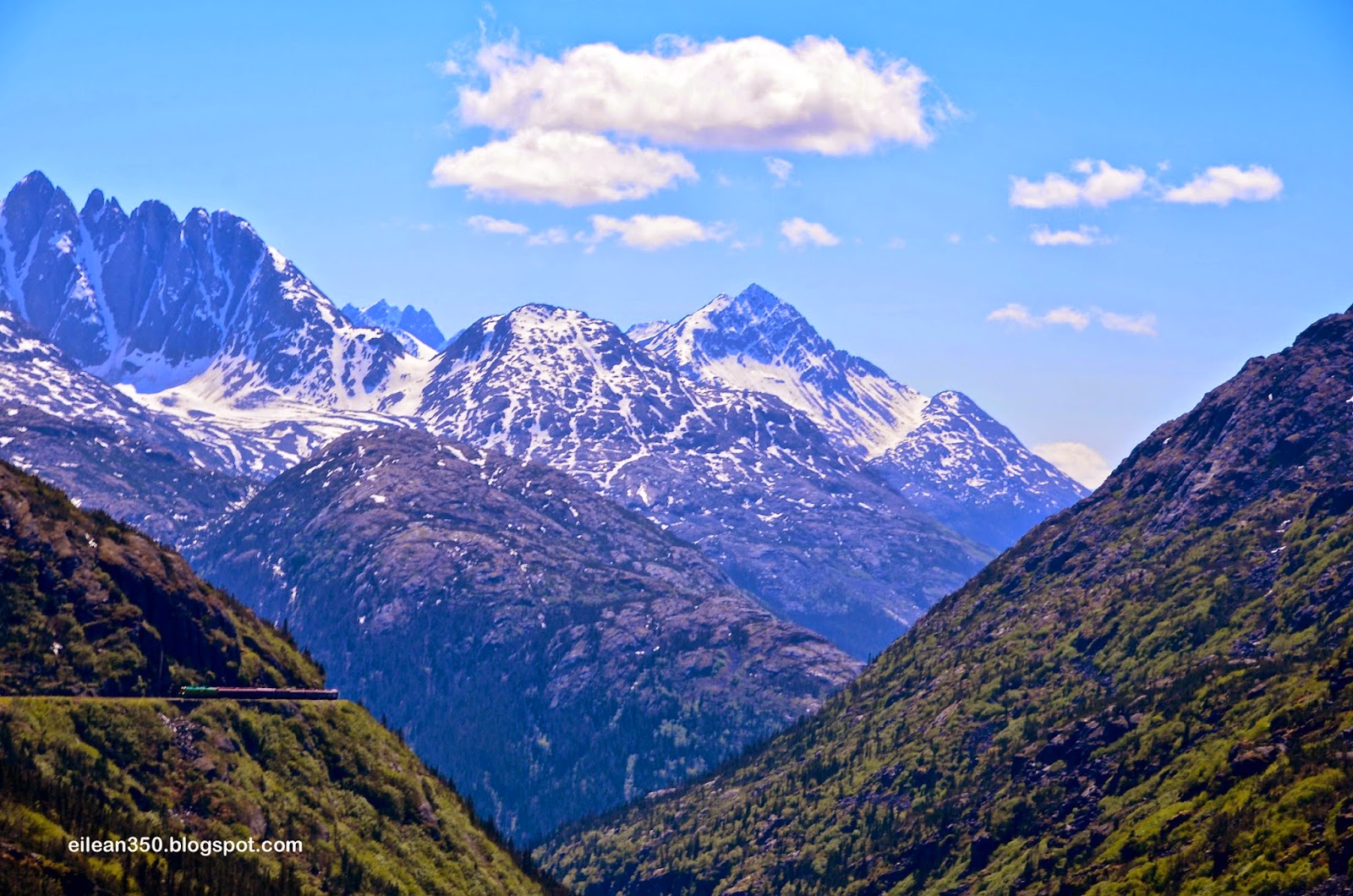 The cascading streams, fed by the increasing snow melt tumble down to the sea. 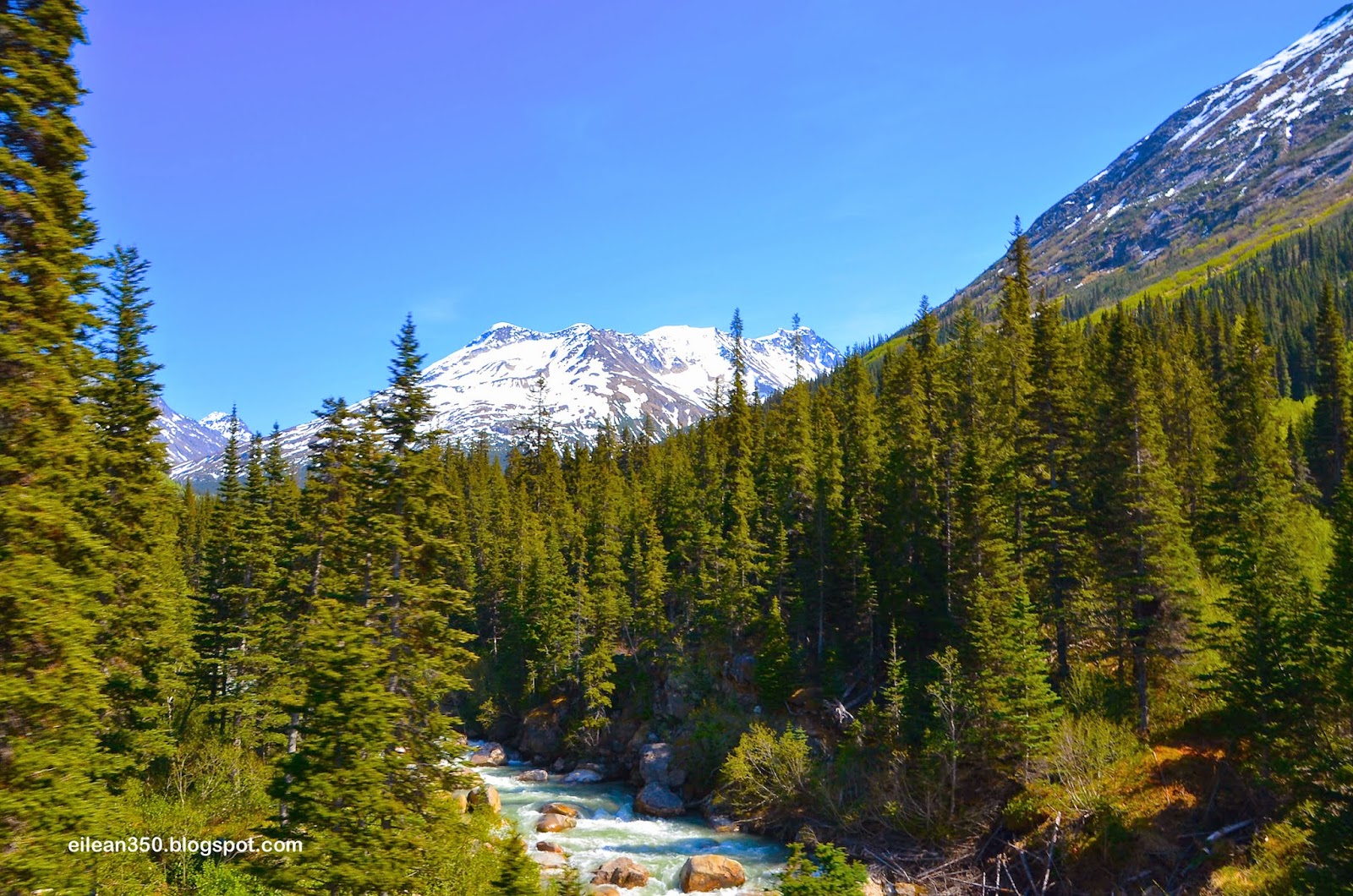 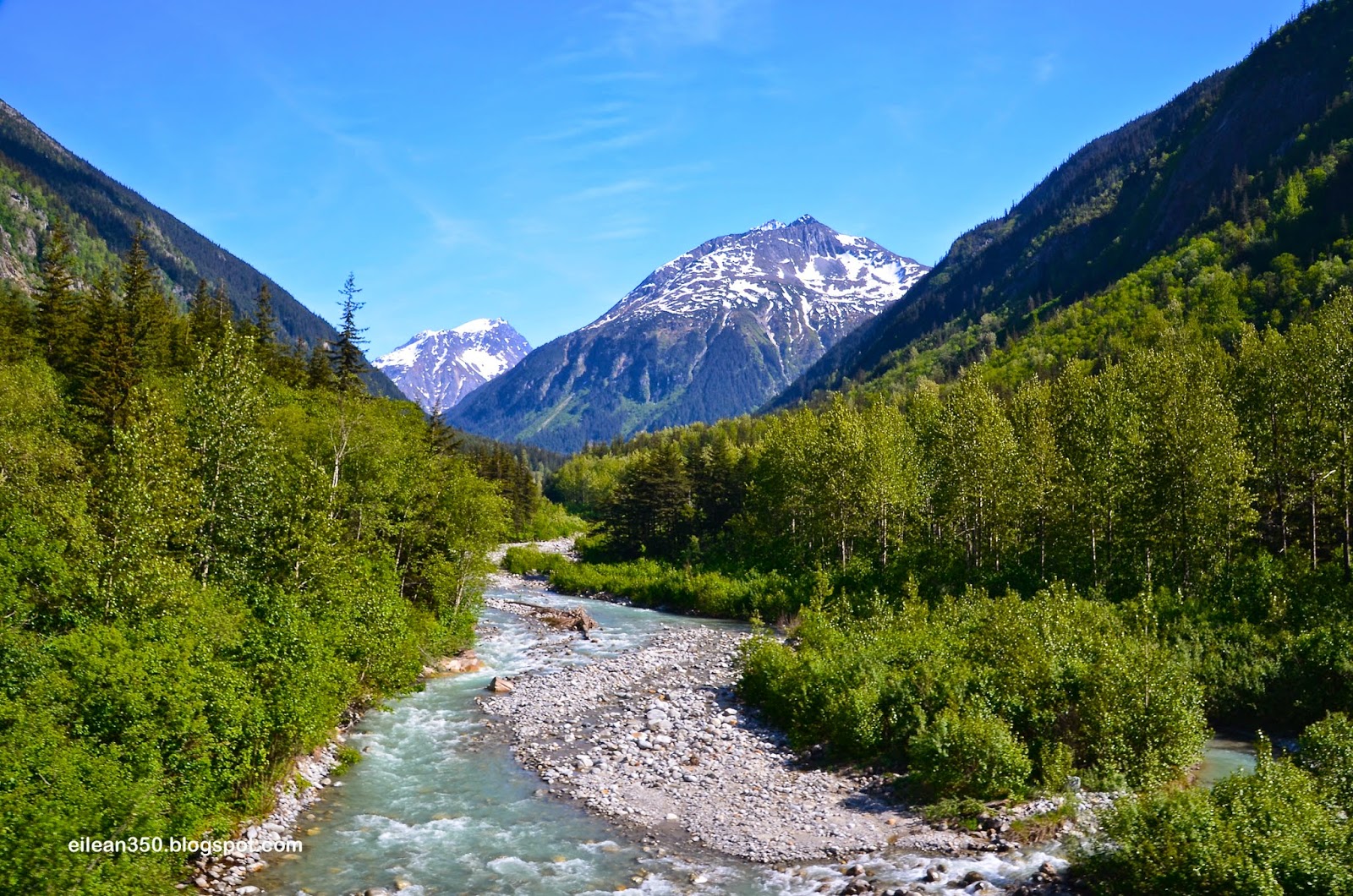 After our delightful train ride we walked the town some more and
then rewarded ourselves with a nice ice cream cone.

After that it was back to the RV's for dinner then a walk down to the pier
to watch the last of todays cruise ships depart.

First the dock workers remove the guards on the lines that keep critters from
climbing up the lines and onto the ship. 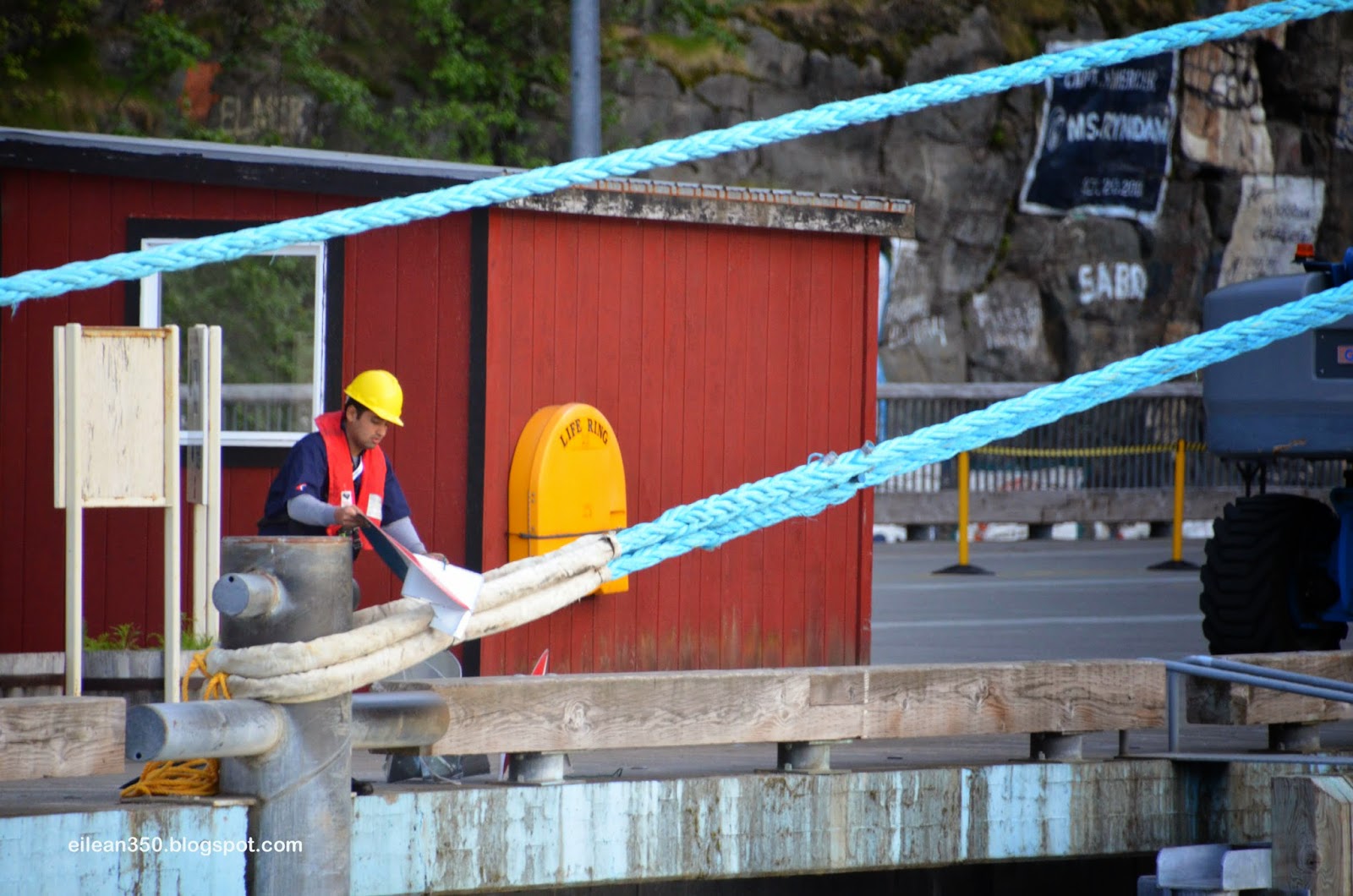 Then, its lines all cast off and retrieved,
the Carnival Miracle makes its 9pm departure.
First using its thrusters to push off sideways and aft from the dock. 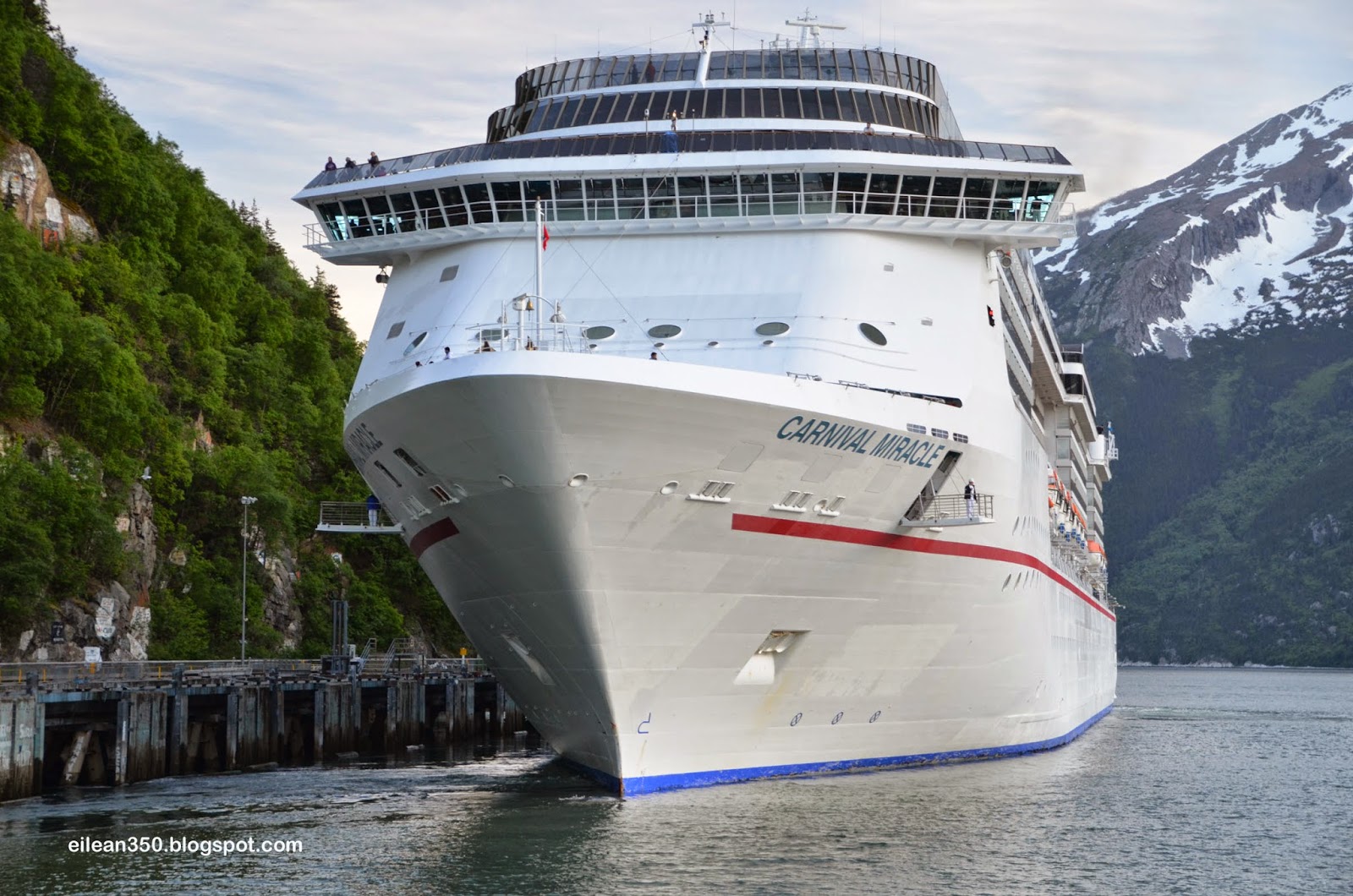 Once safely out into the center of the channel, it thrusts itself around 180 degrees, 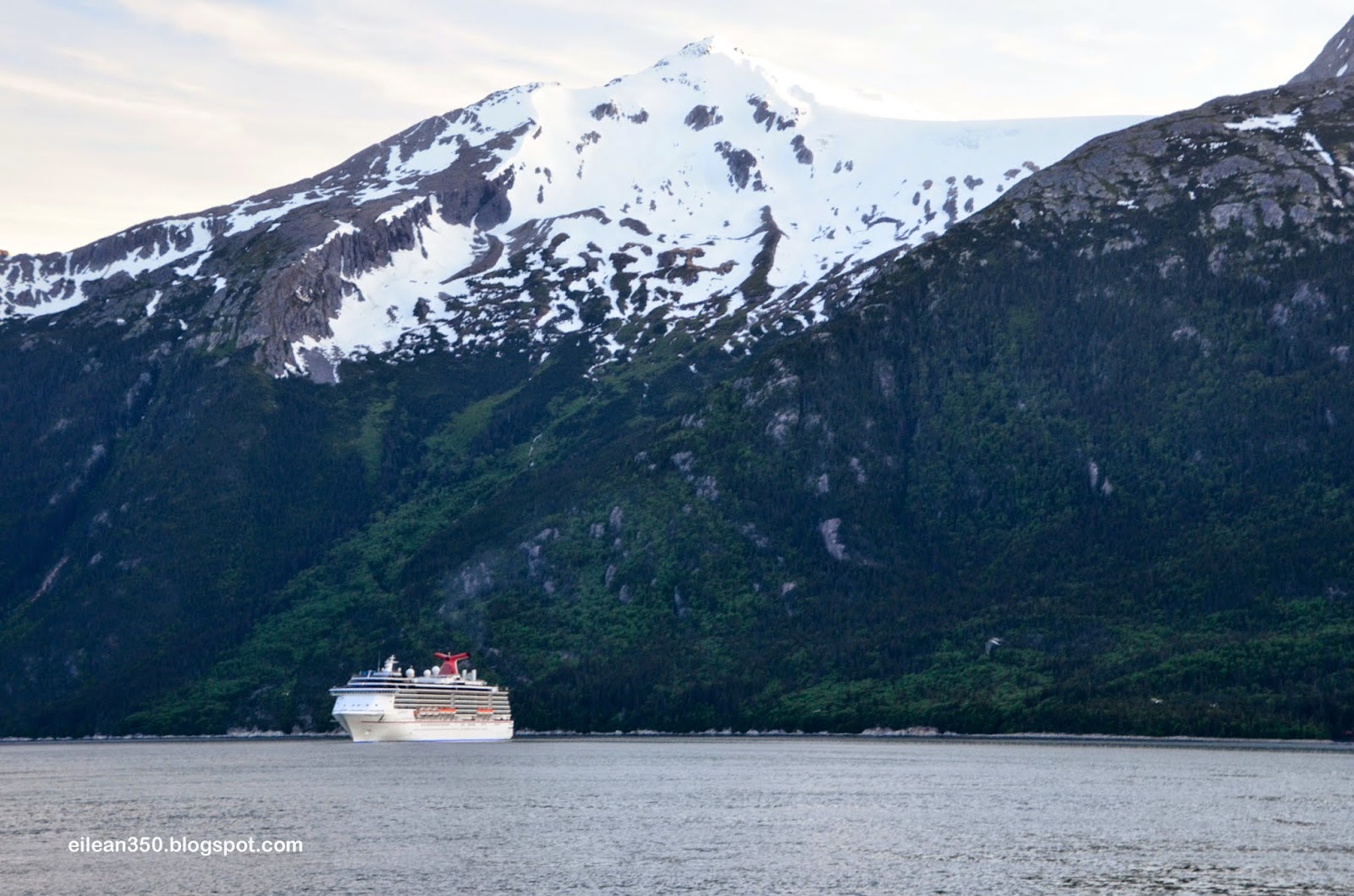 Its turn completed it heads for the open sea. 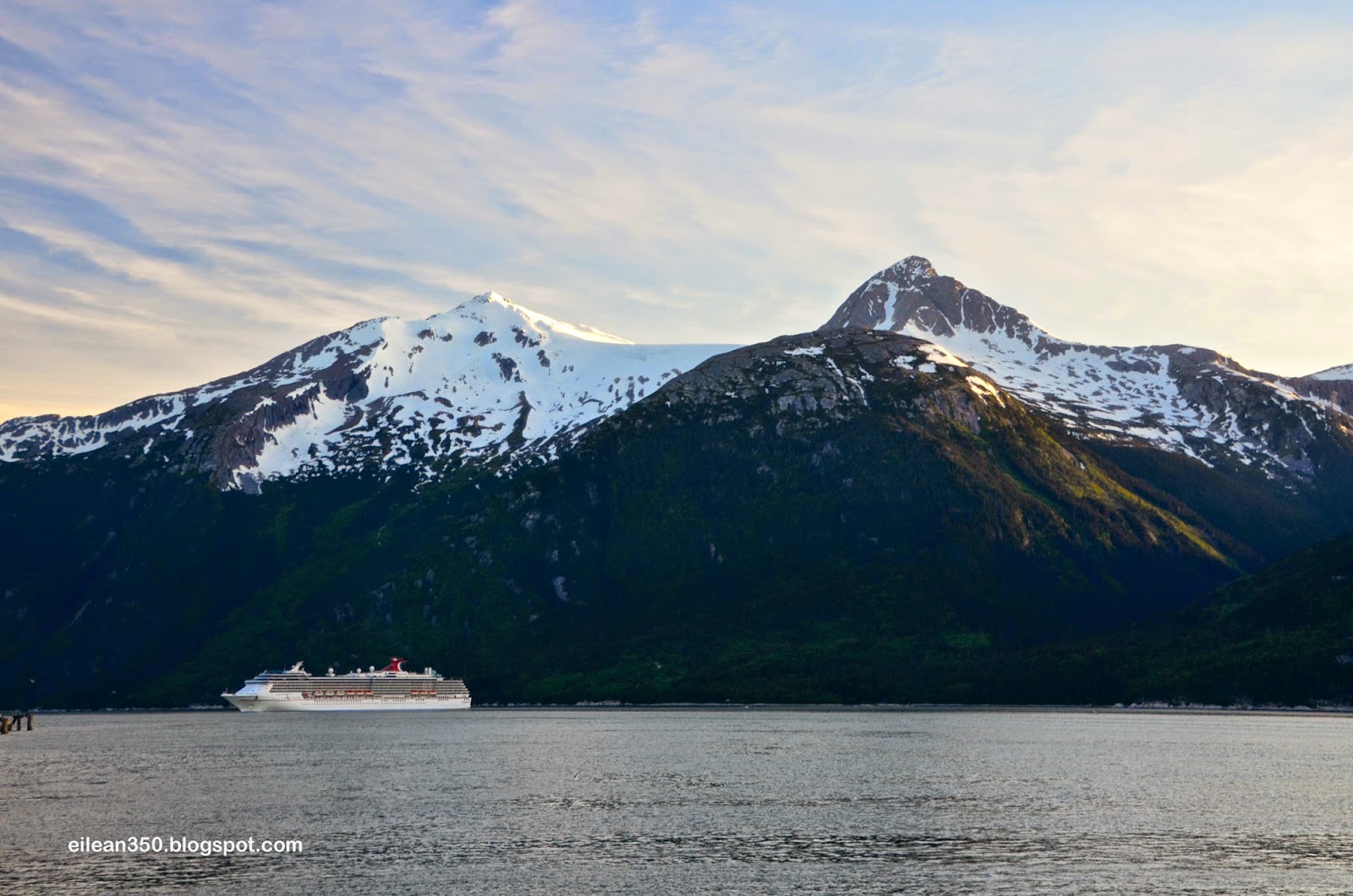 Tomorrow morning the scene will be repeated when 2 ships arrive in port.
Every day from now thru September 25th Skagway will receive cruise ships....
Most days 3 or 4 ships.  Never less than two.

It's an important part of the local economy and one of the things
that gives this town its charm and energy.

Tomorrow our plan is for more touring, some short hikes, and more visiting of
the historic sights.  It's our final day here as Sunday we begin our
3 day trek to Dawson City and the heart of the Klondike.