In May of 1607 - over 20 years before the arrival of the Mayflower,
105 men and boys arrived on the Virginia Shore to establish a settlement
in the new world.

In their first month they built a stockade fort for protection and
some buildings inside the fort for shelter.

They faced numerous hardships including attack from the native people
and starvation - yet despite the odds more arrived and the colony grew
to over 500 by 1609.

Yet over time the colony continued to grow.  The marriage of
Pocohantas - daughter of the local indian chief - to settler John Rolfe
helped to cement relations between the peoples.

Over the years the settlement became the original colonial capital of Virginia,
then moved location and the original fort
and buildings passed into history.

Almost 400 years passed and the location of the original settlement was thought to have
been eroded away and was now beneath the James River.

In 1993 however - archeologists found artifacts that led to the discovery of the old
settlement and palisades.

Our visit to Jamestown began with a leisurely drive down the
Scenic Colonial Parkway. 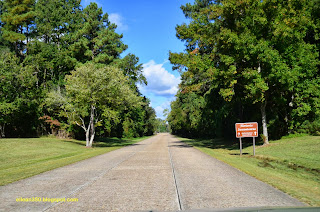 First thru hardwood forests and then along
the coastal estuary. 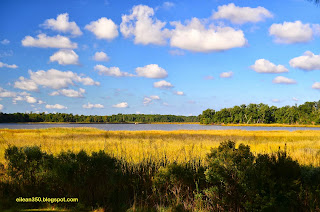 After visiting the National Park Visitor Center and learning about the
area we were able to tour the excavations that continue on the site. 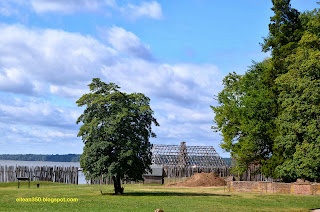 One of the Archeologists gave us a tour and explained the work underway.
Here he is standing in what was the basement of a store house
with baking ovens. 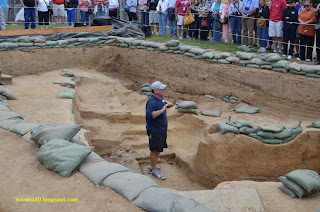 Inside the Palisades (seen in the background) is a scale model of the old fort. 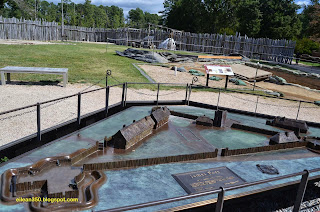 Statue of John Smith - one of the leaders of the Original
Settlement and eventually governor of Virginia. 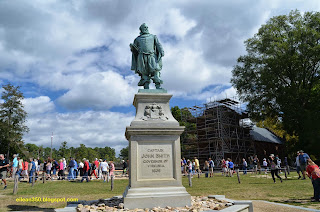 In the excavation, one of the ovens.
Notice the charred soil around the pail. 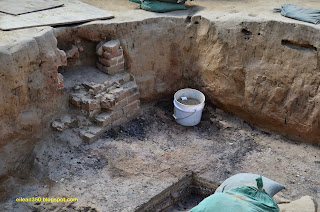 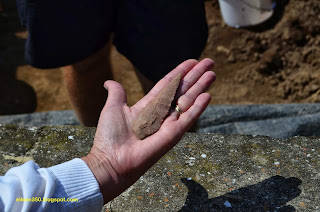 Jamestown was the first permanent English Settlement in the US.
It was the common laws and way of life that planted the seed for what was
to become the USA.

Google the history of this interesting place.  There is much more to learn.

For dinner tonight we went over to our friends Condo for a farewell dinner.
Tomorrow we are packing up and heading to Ohio for the night enroute to
our Montana RV Rally in Goshen, Indiana which begins
on Wednesday.