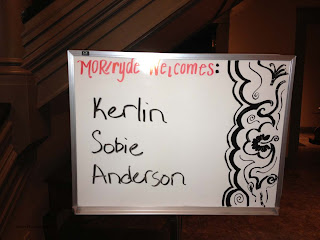 Morning comes early here at Mor/Ryde.
Even before the Roosters crow, the crew arrives and the plant comes to life.

It was before 5am when the lights came on and I heard activity at a far end
of the building.   By 0515 I had the slides closed and was back in my temporary office.

At 0730 I had an appointment at Ford for a minor warranty issue with one of my rooftop
marker lights that I had discovered yesterday.

Upon my return to the plant a 0930 a great deal of work had been accomplished.
All the newly installed metal bracing had been painted...
all 4 suspensions and wheels had been installed..
and Sergio was busy hooking up hydraulics. 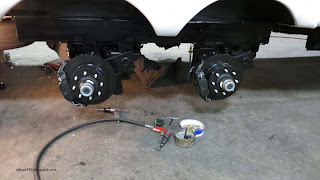 On the view above, the rear of the trailer is to the left so you can see the wheels are on
a trailing arm type of suspension.

The view below is looking forward.  Right in the arch of the "U" of the brake line you will see
a  2-part diagonal accordion looking part.

That is a heavy rubber assembly that actually takes the place of the springs.  The weight of the
vehicle is supported on those rubber assemblies and they act in shear as we travel down
the road absorbing the bumps

Left most is the new disc brakes.  I will now have some serious stopping power! 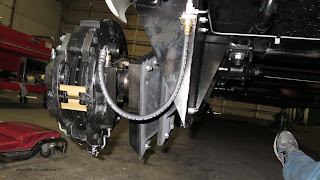 Soon the wheels were back on the Coach and it was time to run the
Computerized Laser Allignment.

A device attaches to each wheel 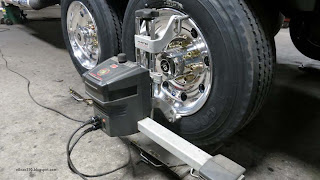 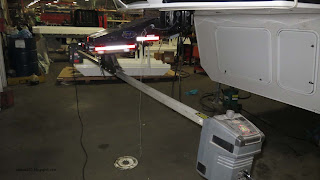 Together they report to the computer. 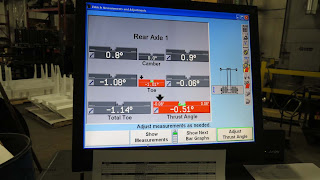 At first the readings were all in the red, then as they adjusted the trailer suspension
and tightened everything down they all turned green and we were
pretty much dead on.

Sergio (foreground) did most of the install, then he and the other gent (at the computer)
worked together on the final alignment. 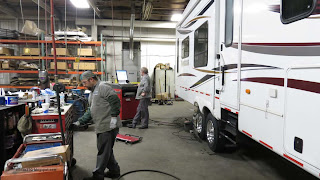 By noontime I was in the street where final measurements were taken and
I was given the green light to hit the road. 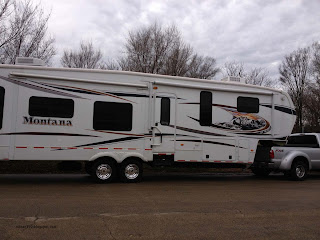 I went back to the County Fairgrounds where I spent Sunday night and dropped
the rig in the same space as before.

I then took a quick ride to see where my 0800 appointment tomorrow will be.
It was good that I did so because it is a tight spot and not one that I'd want to be
wandering around in the dark looking for.

On the way back to the Fairground I finally saw some of the
Amish Buggies. 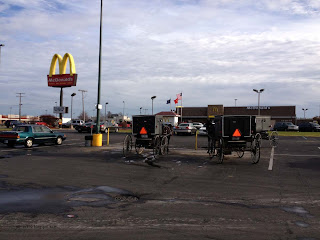 Notice that the parking lots even have hitching posts to tie up to. 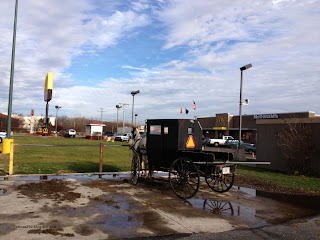 I wonder who cleans up the poop?

Tomorrow morning before daybreak I'll be headed to Lippert Components
the company that manufactured the frame, and the slide outs.

This last appointment is to get the leaking hydraulic piston replaced.
As soon as that is done I'm Southbound headed for the barn.

Heading South, I will need to stop every so often and check the torque on the
wheel bolts.   When you install a trailer wheel you need to re torque them at
specific intervals like 10, 50, 200, 800 miles.

It was great doing business with Mor/Ryde and was a real treat finally
working with skilled, experienced professionals.
Posted by GregK at 3:54 PM