My wise friend Hayden once said "the hardest part is leaving the dock"
Those words have stuck with me as they rang so true....

He was talking about the sailing lifestyle.
So many people spend so much time trying to get their boat 100% ship shape
and ready for taking the plunge - that they never leave the dock.

Sooner or later you need to say "good enough"  cast off the lines, and head out
for that distant shore.

I've found that those words apply to so much more in this life.

leaving the dock,
taking off in the RV,
changing jobs,
moving,
heading off to Europe for 5 months,
or any other of lifes adventures....

the hardest point indeed IS simply leaving the dock.

Once you do cast off the lines and take the plunge - what follows is so much easier!
You figure it out as you go - and fix the problems as they appear.
That becomes your new normal.

But in the interim...  you are sailing!

And sailing we are!

Our last cruising ground was Wales where we left you last.
We only had 4 days to spend there, so we tried to make the most of our short time
before we headed South to The Cotswolds where we are now.

From our base home on the Marina in Conway we took a day trip to visit
Beaumaris Castle.
Along the way we crossed the interesting Menai Suspension Bridge.

Built around 1300, Beaumaris Castle was built by Edward I to strengthen his grip on Wales.

Arriving at the castle, you must first cross the moat while the defenders would protect
the castle from the outer wall.

This was the first line of defense for the castle.

After the moat, an attacker must make it thru the outer wall.
The picture below is taken from atop the outer wall.
On the left you can see the moat - on the right the inner wall.

If you are able to successfully negotiate the moat, the outer wall, and then penetrate the inner walls
you will have make it into the castle courtyard. 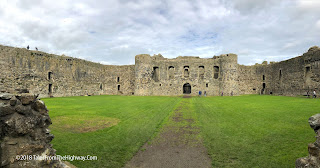 The inner wall contains the living/working areas of the castle.
We were able to walk all throughout the inner walls.  It was quite impressive.

The view below is taken from atop the inner wall. 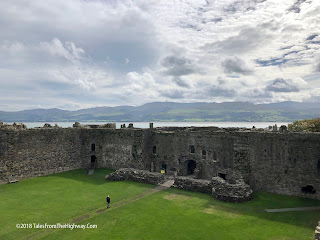 Inside the inner wall lies the Chapel

After leaving Beaumaris, we decided to take a Saturday afternoon drive and tour
Snowdonia National Park which lies just south of where we were staying in Conwy.

The scenery was varied from thick green forests...

To higher rocky terrain that is reminiscent of Alaska.

As we crossed the park from west to east we again descended to the lower
elevations and the greens began to reappear. 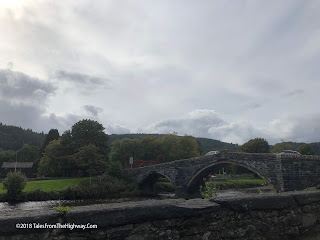 On Sunday we took the dogs and walked a few miles into town along the waterfront.

Conwy is a medieval town which was protected by a wall which encircles the town.
one end of the wall ends at Conwy Castle - the other end in the sea.

We climbed up on the walls with the dogs and walked the ramparts around the town.
Below you can see across town to the castle (center) in the distance.

Inside the wall lies the Smallest House in Great Britain.

Like so many towns we have visited...
Its a beautiful quaint village.

Monday morning we were back in town, this time to tour Conwy Castle.
Like Beaumaris Castle, Conwy Castle is a UNESCO World Heritage Site
and considered one of the finest examples of 13th & 14th Century Military Architecture.

Looking into the courtyard from the walls. 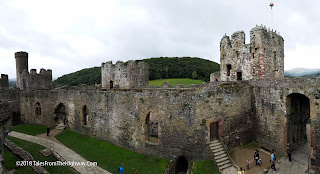 The view below you can see the remains of the great hall (right) where the archways
supported the roof that covered the main banquet hall.

A view of the castle from the top of the kings tower. 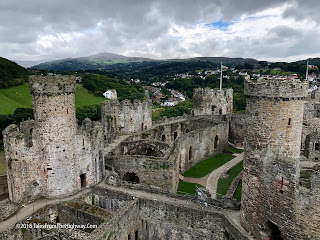 On Tuesday morning our quick visit to Wales had come to an end.
Our next destination, in the Cotswolds, was about 3.5 hrs away, but I wanted to stay on the
smaller roads and see more of Wales on the way, so we took A470 south thru
Snowdonia National Park which gave us another taste of this beautiful and varied area.

We arrived at our home for the next 15 nights after about a 5.5 hr drive.
The Gate House of Sudeley Castle in Winchcombe, England.

Sudeley Castles prior residents include Henry VIII and Anne Boleyn and his final
wife Catherine Parr who outlived King Henry VIII and is buried here.

Our current home is one of our favorites this trip.

We have the place to ourselves, we've had a few wonderful visits from
friends of ours that we met on the QM2, and its been a great place to
take some walks and enjoy the country life as our time in England
starts to dwindle down to just a couple more weeks.

More about our time here and in the Cotswolds in our next post.
Posted by GregK at 7:51 AM