After leaving on Berwick upon Tweed, I mentioned that our next couple of homes
would be in some real old English Castles.

It was a portion of this trip that Kate & I had both been looking forward to
with great anticipation.
After all - it is not every day that one can really be the Lord & Lady of the Castle.

Our first castle that we stayed in was Morpeth Castle.
You can read about it's history HERE.

Owned by the Landmark Trust - a non-profit that buys, restores, and rents out historic
buildings as a means to provide cash flow - the gatehouse of the castle is the remaining
structure in which we stayed.

The entire compound is surrounded by old walls so once inside it is quite private.
The gate opens and we drive the car thru into the courtyard inside the walls.

The view from inside the Castle. 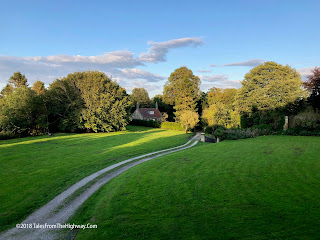 Looking out thru the gates

Inside the walls we parked the car in courtyard.
The gateway us just above the roof on the right.
The door into the castle is a few steps up and on the right. 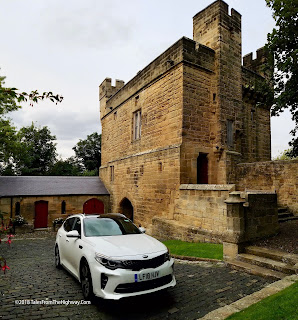 Our bedroom (there were 4) was on the second floor. 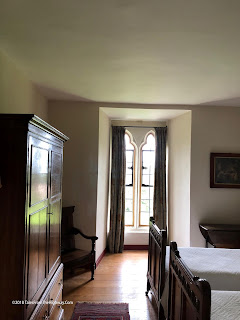 On the first floor was the living room and kitchen which was separated from the living
room by a large wooden half wall.

There was lots of mentions about ghosts in the guest books but somehow we made it out of the
800+ year old castle unscathed!

Enroute to Morpeth we had some time to kill since check in was not until 4pm so we did
a bit of castle hopping and visited a pair of them in the vicinity.

Founded in the early 1100's due to its location near the border with Scotland it saw much
action as England & Scotland fought their wars for control of the area.

This castle was free to visit and dog friendly.
While much of the castle was ruined, much was still left and it was fun to roam around
outside and inside of the ruins.
Departing Norham Castle - we took a pretty drive thru the English Countryside to
our next stop

Around every turn the scenery seems to change.

Our next stop was Etal Castle
Built in the mid 1300's like Norham Castle, it saw its share of conflict during
the wars between England & Scotland

These castles were like small cities.  Breweries, Bakeries, and all the infrastructure
needed to support a small army.
Etal Castle commanded over 100 horsemen and guarded a nearby bridge. 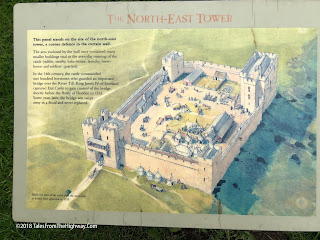 Shifting gears from the middle ages to antiquity we went to visit
Housesteads Roman Fort   located along    Hadrians Wall.

At the height of the Roman Empire, the Empire extended up to the area along the'
present day border with Scotland and around 120AD Emperor Hadrian built a defensive wall
clear across the width of England.

Today much of the wall still stands and you can walk the wall, coast to coast, across England.

To get there it was another nice 1hr drive thru the beautiful English Countryside.

Arriving at the parking lot - you have about a 1/2 mile walk up to the fort and the wall.

The fort - how it was laid out and incorporated into the wall.
We approached from the south - the bottom of the photo below.

Below - looking along the wall towards the east you can see the wall winding off into the distance.

A larger panorama...
Some buildings on the right, and the north gate to the left.
Kate & Lucy are standing in one side of the gate.

Below a depiction of what the Granery would have looked like. 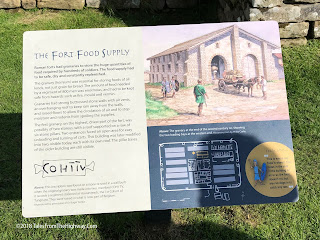 The ruins of the Granery 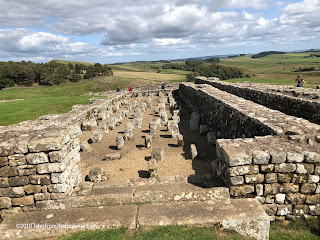 The Toilets.
The plaque shows what it would have looked like.
The sewage dropped down below and was carried away in underground piping
by rain water.

After our 3 nights at Morpeth Castle, we moved on to Cawood Castle.
First mentioned in the 1100's Cawood became the palace of the Archbishops of York.

Most notably - it was were Cardinal Wolsey was arrested under the orders of Henry VIII
and sent to London for Trial.

The white part of the photo below is the gatehouse, and that is where the residence
is located.

Entering into the residence. 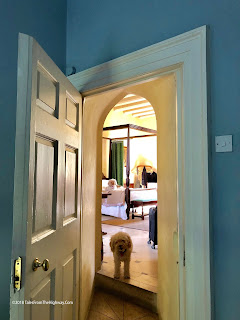 On the first floor is a bedroom and small kitchen. 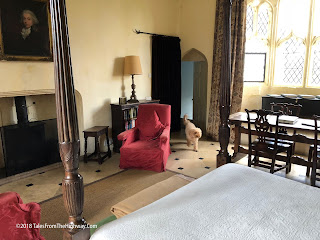 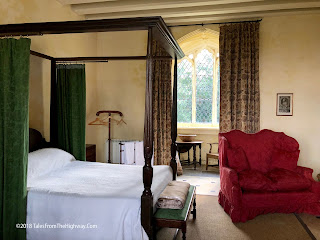 Further up a steep spirial staircase....
A second bedroom on the second floor 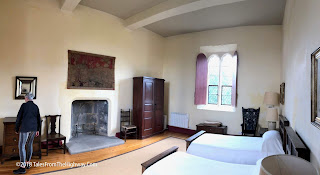 And further up that steep spiral staircase is the roof.

Looking down the staircase.  The first door is the entrance to our living quarters,
further down by the fire extinguisher is the bathroom 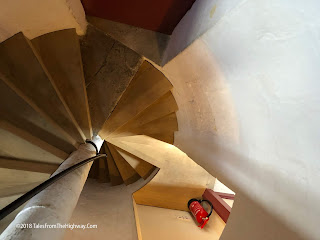 The banquet hall was two floors.
Notice the two fireplaces at the far end left corner.

Giant Medieval Keys to get in. 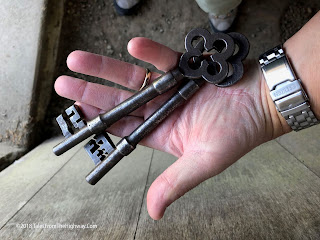 While based in Cawood we did a little more Castle Hopping.
About 20 miles north was Castle Howard
While not a true castle - it was built about 300 yrs ago and serves as the current
home of the Carlisle Branch of the Howard Family.
(did you follow all that?)

To get there you go thru the Carrmire gate.... 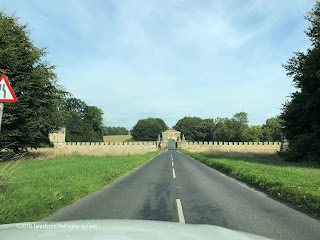 And then the pyramid gate.... 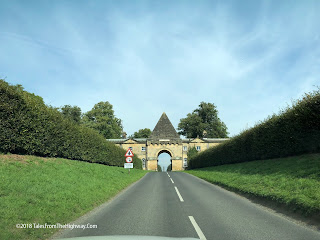 And then past the monument to the 7th Earl of Carlisle,
around the great obelisk,
and thru another gate where you actually pay to get in.

Dogs are allowed everywhere except inside the house, so Kate & I took turns going inside.
I walked the grounds while she visited, and then vise versa. 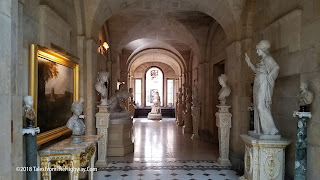 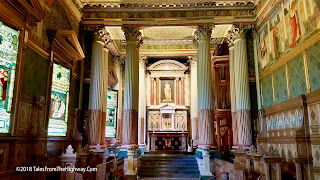 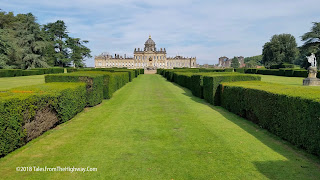 The rose gardens had lost much of their sheen due to the advance of Autumn, but they
were still pretty and fragrant with the scents of late summer flowers. 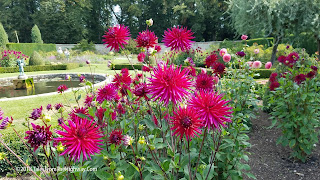 The Castle is the perfect venue for a Cosmo Doodle PhotoShoot!

Can't you hear the music playing???
The Shutters snapping???


The estate is over 6,000 acres in size and is mixed estate, farmland, tenant farmland etc.
Walking the grounds alone is a great way to spend an afternoon. 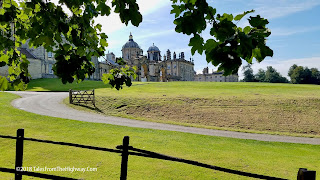 Another day trip from Cawood was to York.
Our day took us to the Medieval York CityWall that surrounds the old city.

Unfortunately dogs are not allowed on the wall so it was a Doodle-free day.

Walking the wall - you get some interesting vantage points to view York Minster. 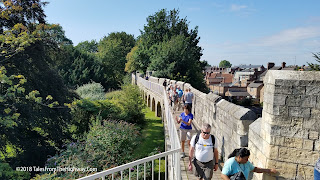 At several points along the wall are "Bars" or the old gates to the city.
Below is Bootham Bar where we descended from the wall and began our stroll
thru the old city inside the walls.

Below you see Bootham Bar from the inside of the city looking out.
The opening to the right would be recently added to accommodate modern traffic.

Looking to outside of the walls 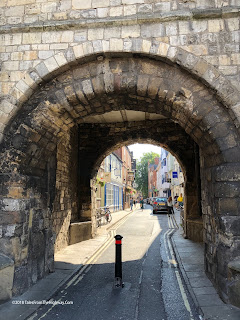 Inside the wall - the old city is a maze of cobbled streets and half timbered houses. 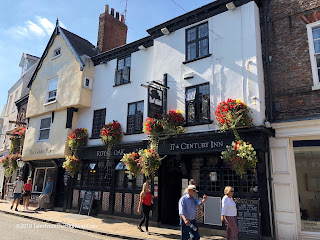 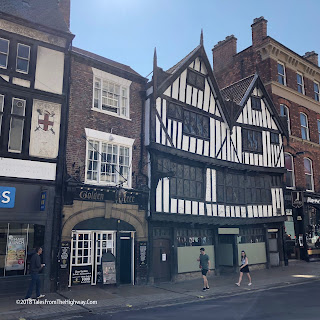 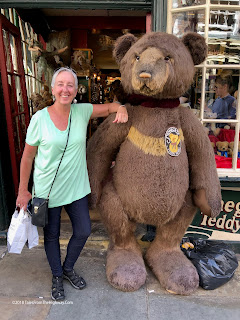 The windows in our Castle 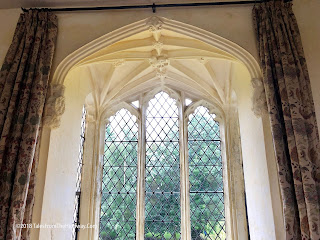 The ceilings in York Minster
(see any similarity?) 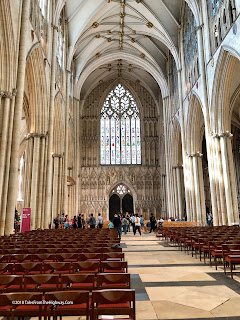 York Minster was undergoing significant maintenance when we visited and it was not possible
to get a full cathedral view.

The stained glass was beautiful! 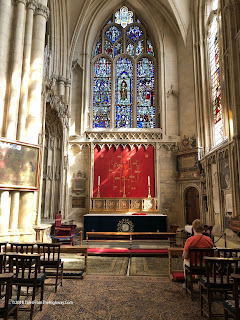 That night (Sunday), our last night in Cawood we went to the local Pub
just a short walk from our Castle.
It was Sunday Roast Night!

Roast beef, potatoes, Yorkshire Pudding.
And of course a pint of Guiness to wash the whole mess down!

On Labor Day Monday (not a holiday here in England)
We said goodbye to Yorkshire and headed north and west to the Lake District
where we will spend the next 11 nights.

4 nights at the Wren Cottage (below) in Keswick, then we'll move to a place further
south and more rural called "Coal Yeats"

Keswick is a bustling market town in the heart of the Lake District.
Just down the street from us is a beautiful park where we took
the doods for a nice walk and met some of the locals.

You can see  that the colors here are starting the paint the trees as well.

Below is the lawn Bowling (court?)  (field?)
Lawn Bowling is sort of like Italian Bocce Ball...
But probably much more polite.

We are really enjoying our time here in the UK.
The people are so warm, polite, and friendly...
The countryside is idyllic.

Our time here is rushing along.
6 weeks from today we'll be back on the QM2 headed West.

To be sure - we'll continue to drink it in while we can.