We are back at Lake Roosevelt - One of my favorite wintering grounds here
in Central Arizona.

After leaving Quartzsite we first headed south for a few days to Yuma.
Yuma is a big winter Snowbird town and there is much to do and see. 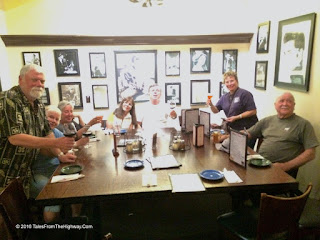 Earlier that day,  Dick and I sat outside the bus in the warm sun and watched the
Broncos beat New England and advance to the Superbowl.

After a few days in Yuma Dick & June headed back towards home while the rest of us
flocked eastward to Lake Roosevelt Windy Hill Campground in Tonto National Forest.

Our loop here is pretty much empty except for our 4 Rigs and the camp host.

$8 per day for dry camping.  $4 if you have a Geezer Pass.
A dump station about 10 miles up the road that is open Thurs-Sunday
Water Hydrants thru out the loops  Restrooms with solar showers
help you extend your tank time.

It is extremely quiet and peaceful here in the winter.

Me Ron & Stan on the right and Jim on the left. 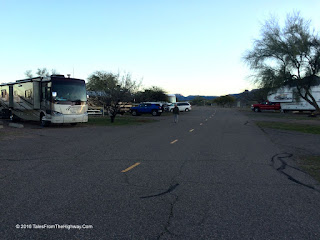 Our site is at the end of the loop so we have a nice sitting area by our campfire ring
All sites have a nice view of the lake.
The El Nino` Winter has contributed to a much greener environment this year.

While here we broke out some of our bacon from Oscars Smokehouse. 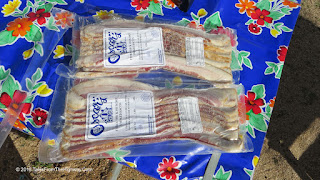 An early morning hike each day helps to work off some of the bacon. 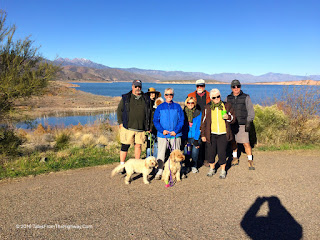 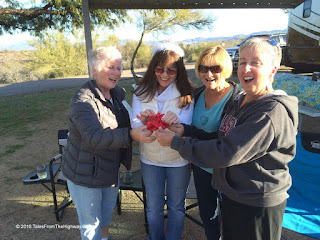 A favorite is barbecue pizza night.
The crust is rolled out and put on the grill.
One side is toasted golden brown.
The crust is flipped and the ingredients are placed on the toasted side.
The pizza is placed back inside the barbecue to toast the other side and melt the cheese. 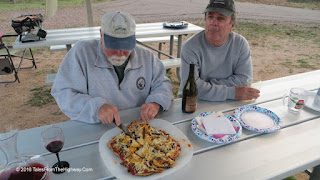 Later last night we sent a luminary into the night sky in memory of Stans Mother
who had passed away the night before.

You can see how large they are by the person holding it while it warms up.

Once it is hot enough it drifts higher...  slowly at first but gaining vertical speed
till it is just a spot in the night sky...   joining the rest of the stars in eternity. 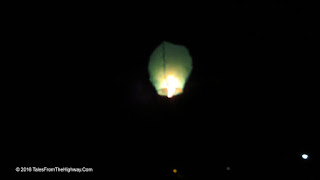 The doodles are waiting for the ok to come out of the bedroom. 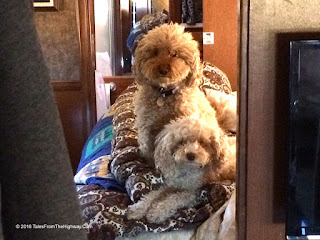 My solar installation has been working great.
I was concerned if the panels would be enough to completely supply my needs and
it seems that they are.

By morning my battery bank is down to about 75-80%

With my office equipment running all day I still have a full charge by the afternoon.
This screen shot shows my monitoring software.

I'm producing 50amps - 17 of which is being used by the house
and 33 are going back into the battery bank which is back to 92% of temperature
compensated capacity.


Our plan is to stay here for at least another week.
I've got great 4g service and a great view.

We have a storm coming in tonight and perhaps some snow.   Its going to get
colder for a few days but somehow we will endure.