Leaving Casper, it was time to turn our sights towards the southeast.
Our route took us south on I25 and then east on US 26 to the small
town of Guernsey Wyoming where we spent two days seeing some really impressive
Oregon trail sights.

Following the North Platte River, in this particular location the topography
forced the wagon trains into a narrow area where they had to proceed one behind the other.
Traveling over soft sandstone, the tens of thousands of wagon wheels cut into the
rock.   As the wheels cut into the rock, eventually the bottom of the wagons rubbed the rock
further cutting into it.

The result was these deep cuts in the rock that left a mark on the land to remember
these pioneers by.

These pictures were taken a few years ago.  This time I gave my knee a rest and did not make
the trip up the hill but Ron & Maxine did. 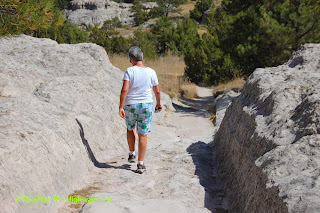 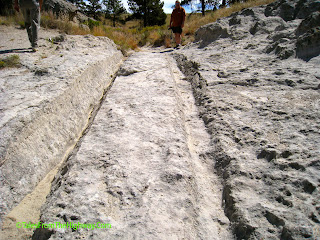 You can still see the ruts in the grass below as well. 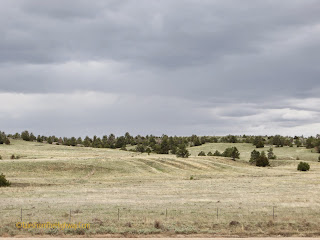 In the same vicinity is Register Cliff.   We camped not far from its base.
The plaque below tells the story... 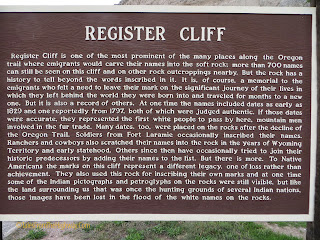 Some of the names left on the cliff. 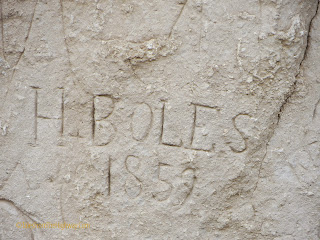 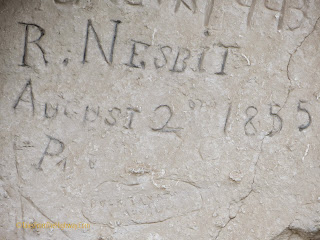 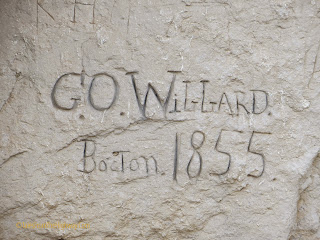 The view below shows part of Register Cliff.   The trees in the far distance is the
North Platte River about 100 yards distant from the cliff.

This was a natural choke point where the wagons were concentrated in a narrow area,
and from here they passed behind me and about 1/2 mile further on they crossed
over the sandstone creating the ruts in the pictures above. 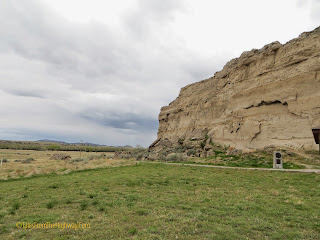 While in Guernsey we visited the Ft Laramie Bridge over the North Platte.
Built in 1876 it was too late to be of great use by emigrants on the Oregon Trail,
but it did play a pivotal role in allowing the US Calvary from nearby Ft Laramie
easy access across the river during the Indian Wars.
It is now one of the oldest US Army Bridges in the US. 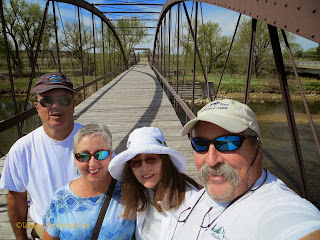 After visiting the bridge - we traveled another 2 miles to Ft Laramie.
One of the most famous of the Old West Forts it served as Fort and Trading Post
during the Westward Migration on the Oregon Trail.

Below are some of the houses that constituted "Officers Row" 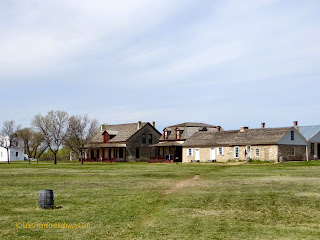 The Calvary Barracks.
The top floor held an infantry company of about 60 men on each side.
The First Floor contained the Mess Hall and support facilities. 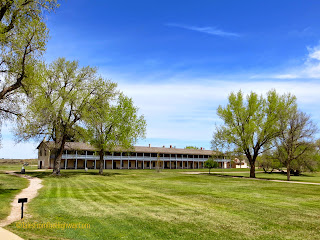 Some interesting copies of diaries and notes in the visitor center.
Click to enlarge and read. 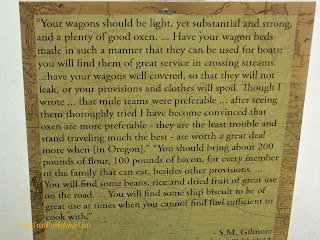 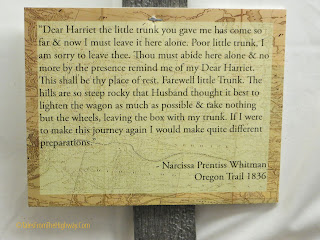 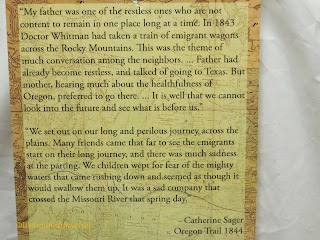 This is the mess hall in the Calvary Barracks. 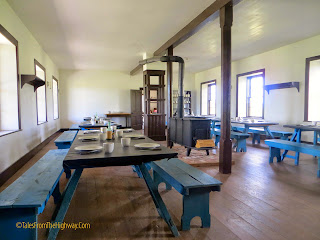 Here is one of the Wings on the top floor.
Notice that the beds are all made up and have the soldiers equipment such as
Swords, mess kits, pistols, cartridge cases etc. 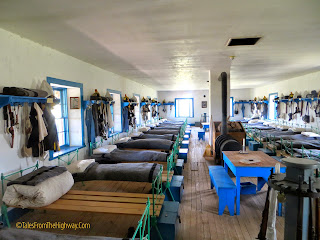 A local elementary school was visiting and some of the boys underwent
military precision drill instruction. 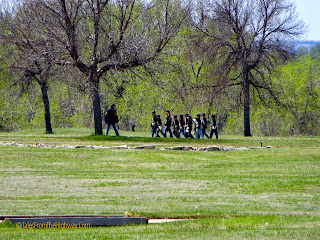 Our intrepid band of travelers. 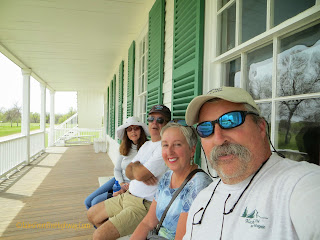 We departed Guernsey Wy this morning and now are camped
at Lake Ogallala State Park in Ogallala, Nebraska.

It's a lovely spot on the shore of the lake and shaded by mature Cottonwood trees.
A regular green oasis in the middle of western Nebraska.

We will stay here for the weekend and chill for a few days.

Its about 9pm now and the atmosphere is quite moist....

As if to protest this heavy load of moisture the skies opened up and
we just had a severe thunderstorm lasting 30 minutes with heavy rain lightening and hail.

The forecast is calling for an unsettled night.

Tomorrow we'll see if we have any damage to the F150.
No problem regardless...  that is why they invented insurance.

Someone asked what was wrong with the truck?
I was concerned about hail damage but in the morning light it seems fine.

The National Weather Service reported that our storm had 70mph winds.
Storm chasers were all over following this storm and only a few miles from here
they had 2" sized hail.