Our eastward stroll continues.
After leaving Lake Ogallala we had a strenuous 1 hour drive to North Platte, Neb
where we spent the night and visited the Union Pacific Bailey Switching Yard. 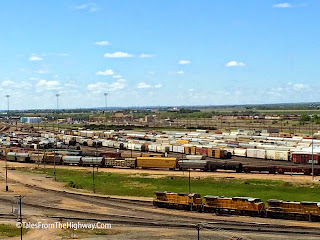 The Bailey Yard is the largest rail switch yard in the world.
Measuring 2 miles wide by 8 miles long the yard processes over 14,000 rail cars
per day.

Trains are broken apart, the cars sorted and placed on the right tracks with other cars
going to the same city.   On average a rail car spends less than 11 hrs in the yard before
it moves out towards its destination.

There are separate facilities for both eastbound and westbound trains.

There is also a repair facility for the Power Units (Locomotives).
This shop was featured on Modern Marvels.
They repair about 350 Power Units per month. 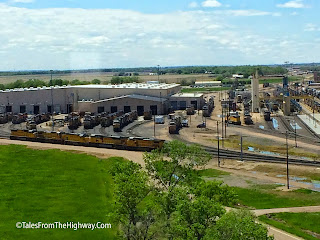 There are also fueling facilities for trains passing thru and they pump
about 12 million gallons of fuel per month.

We viewed the yard from the top of the Golden Spike tower.
8 floors up the view of the yard and surrounding area was impressive. 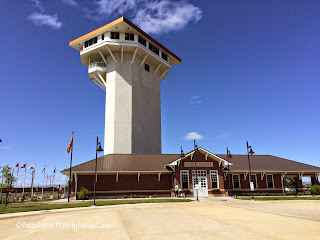 The next day it was time to hit the road.
While Kate and I napped, the Doodles drove us to Kearney. 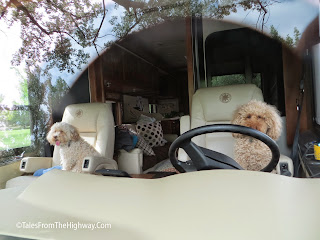 While in the neighborhood we also did some shopping at Cabellas Store
in Kearney.

Our night was spent at Windmill State Rec Area in Gibbon, Neb.
It was a lovely state park but unfortunately it was a raw and rainy day and
I did not get any pictures of the park.

We had 30amp service and there is water and a dump station in the park.

The next day, onward we pushed.
Traveling thru Omaha, Neb you pass "The Big Coffee Pot"
Sapp Bros Truck Stop is a local landmark that goes back to my days as a trucker.

I've had many a plate of Biscuits and Gravy here. 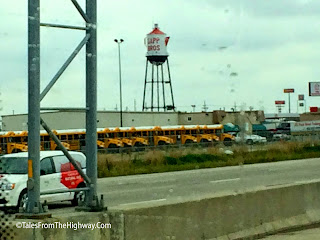 Our next stop was Prairie Rose State Park in Iowa.
It is a small park on a small lake.
It is quiet and relatively unknown except to locals.
We had the place almost to ourselves.

50amp service is available.   Full Hookups in a separate area up the hill. 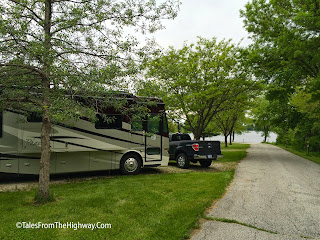 The rain had stopped, and while overcast the promise was for sunshine tomorrow.
In the interim we enjoyed watching the Geese and their babies in the lake. 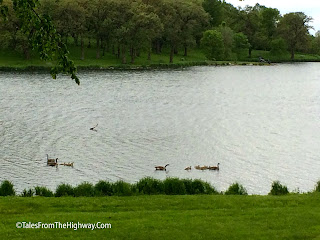 FW Kent is another park frequented mostly by locals.   It was the start of the
Memorial Day Weekend and this park is first come first serve.
Our early (noonish) arrival on Thursday assured us of a spot for the next two nights.

The park is the nicest county park that I've ever been to and much nicer
than many State Parks.
We have 50amp service and a dump station is on the way out. 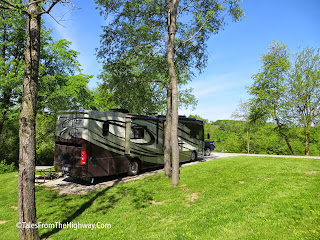 Our morning walk, Kate and Maxine walk the Doodles ahead of us. 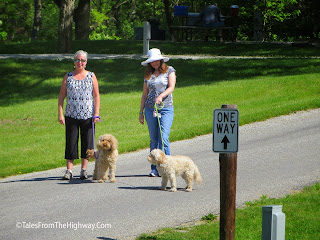 The reason for our stop here was to visit the Amana Colonies.
In short the Colonies were started by German Immigrants in the mid 1800's.
A plaque below tells more of the story. 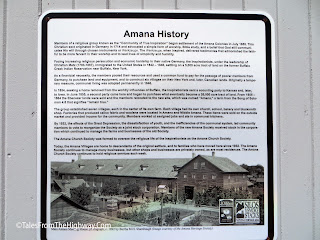 A backyard on a side street. 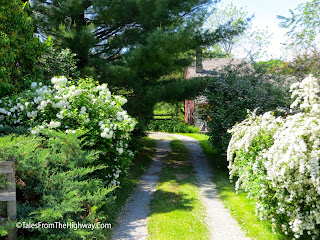 We visited the main village (and the largest of the 7) Amana.

It was the first microwave oven and was made here. 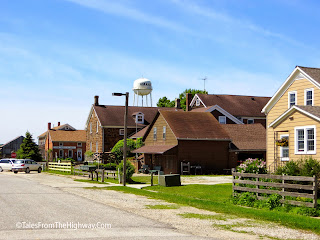 It was a quiet day to visit the village. 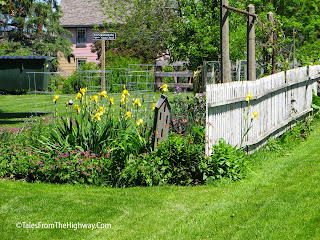 The main road thru the village. 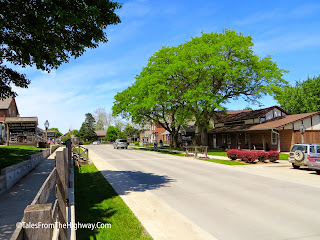 We stopped for lunch.   Of course the food is German and delicious.
Kate had Wienerschnitzel and I had Wurst and Kraut.

I washed it all down with a Bittburger Pilsner Beer which is one of the best in Germany. 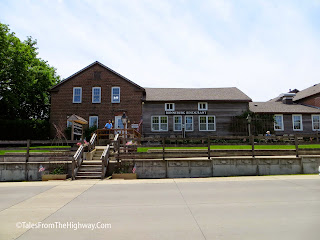 Life is too short to drink Miller Light. 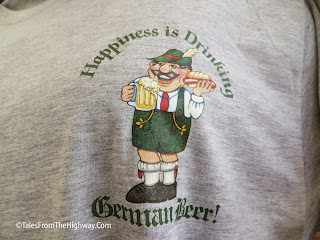 Tomorrow morning we push on to Joliet, Illinois for one night, and
then to Maumee Bay State Park in Ohio.

We will spend two nights there on the shore of Lake Erie, and
visit the Henry Ford Museum in Dearborn, Mich.