Things that pop by day

The past ten days has been one to remember.

First - my license plate for the Motorhome finally arrived!

I did not mention but the RV dealership had really screwed things up when processing
our out of state registration.   Now I don't want to sound like a know it all....
but I gave them instructions on what to do and how to do it - which they completely
ignored and as a result for the past month we have been driving around in a sort
of legal haze as to whether or not we were street legal.

After calling the state each day for a month and being told it was still going to
be 3 weeks or longer to get license plates I was quite frustrated.

In a last desperate effort I sent an email to the NC governors office with no real hope
that it would have any effect but surprisingly the next morning I had a phone call
from someone who listened to my story.

Less than 3 hours later she called me back and told me that she was holding my plates
in her hand and where would I like them to be overnighted too.
Yes Overnighted!

Friday morning I had my plates in my hand.
We were finally legal! 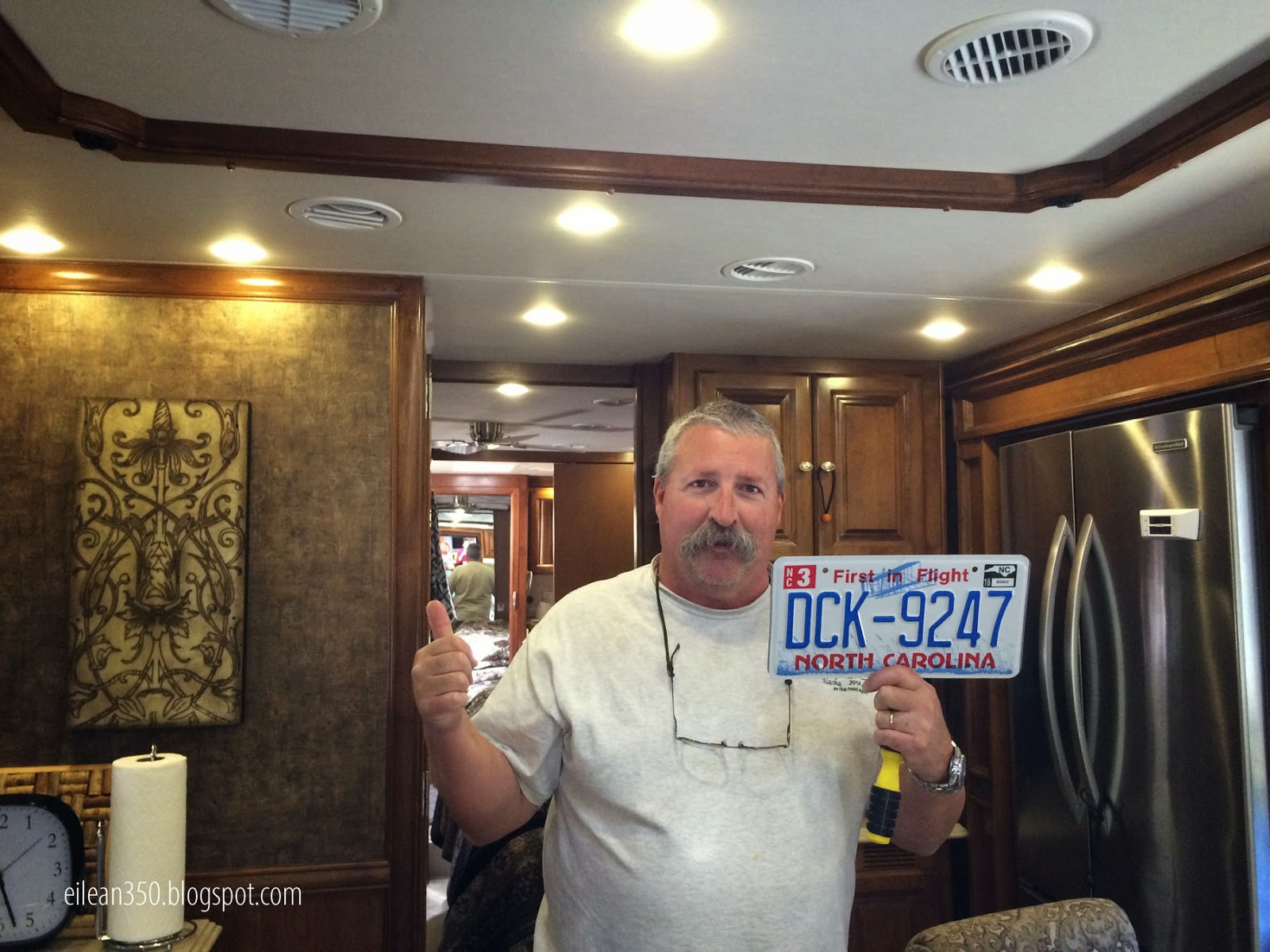 So - to celebrate we decided to head to the Las Vegas Strip and take in the sights.
We took this picture in front of the Mirage Hotel.  My company was going to start
a National Convention in this hotel the next day. 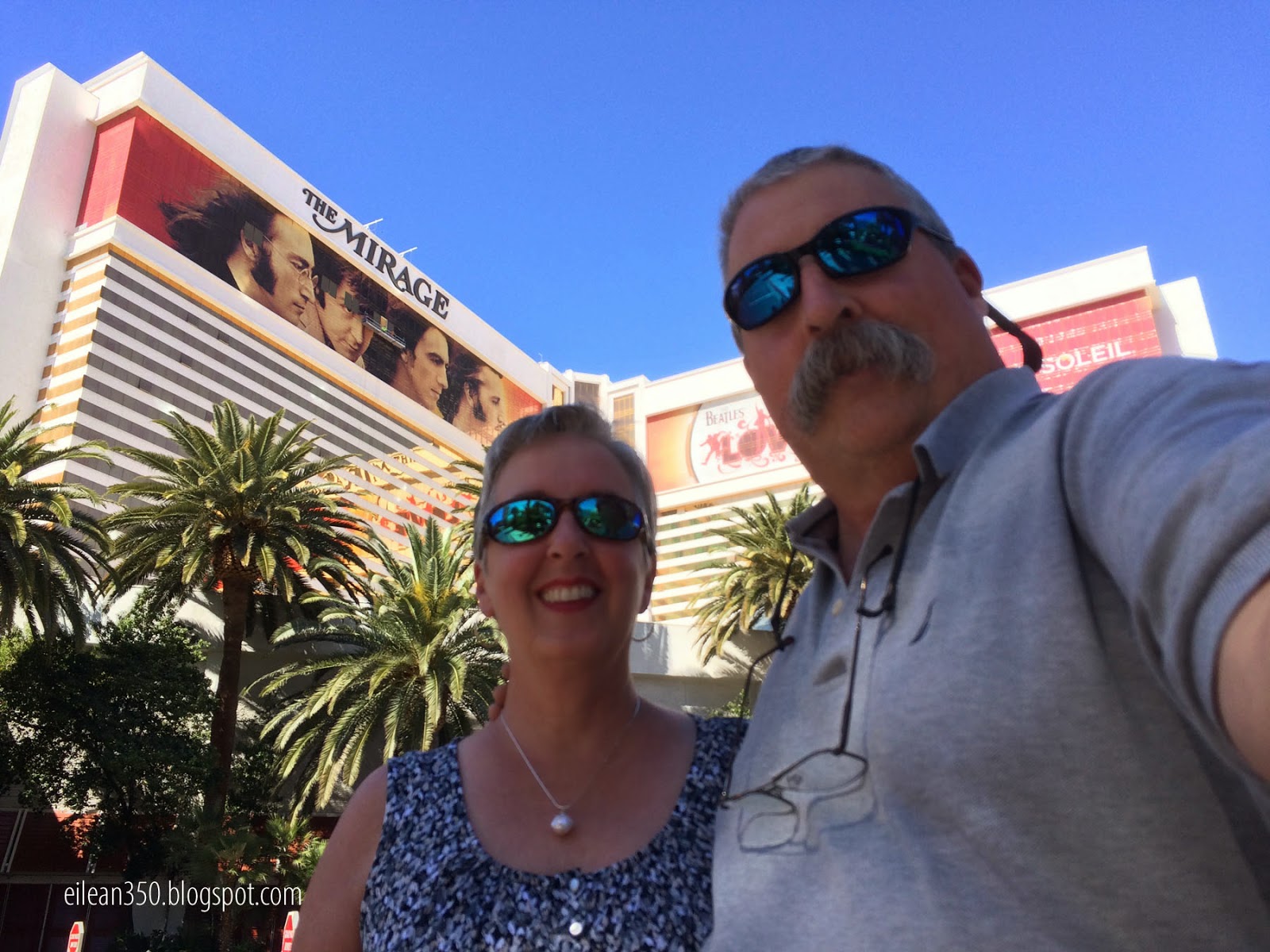 Another oasis in the desert. 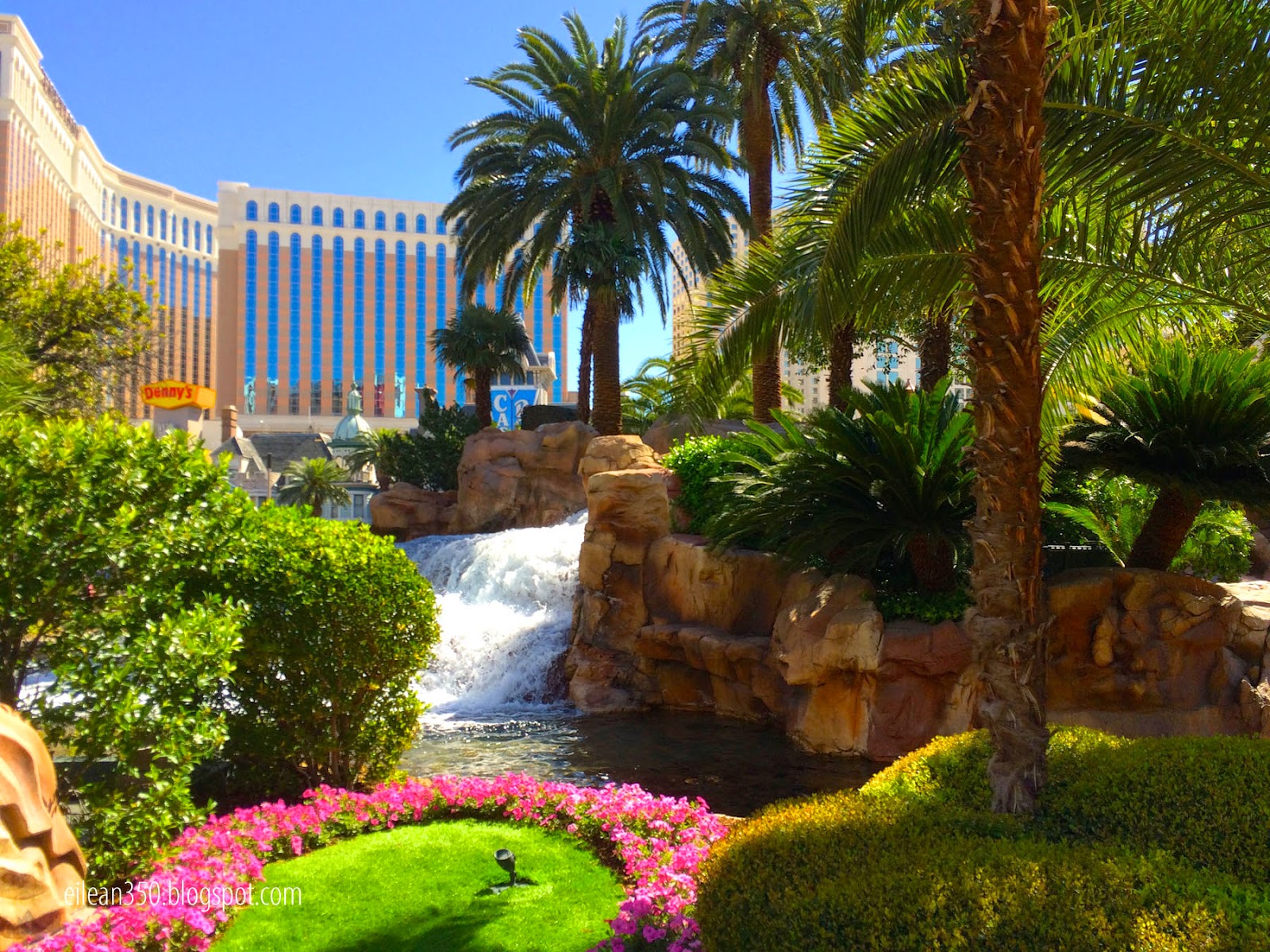 We strolled the streets of Venice (in the Venetian Hotel) 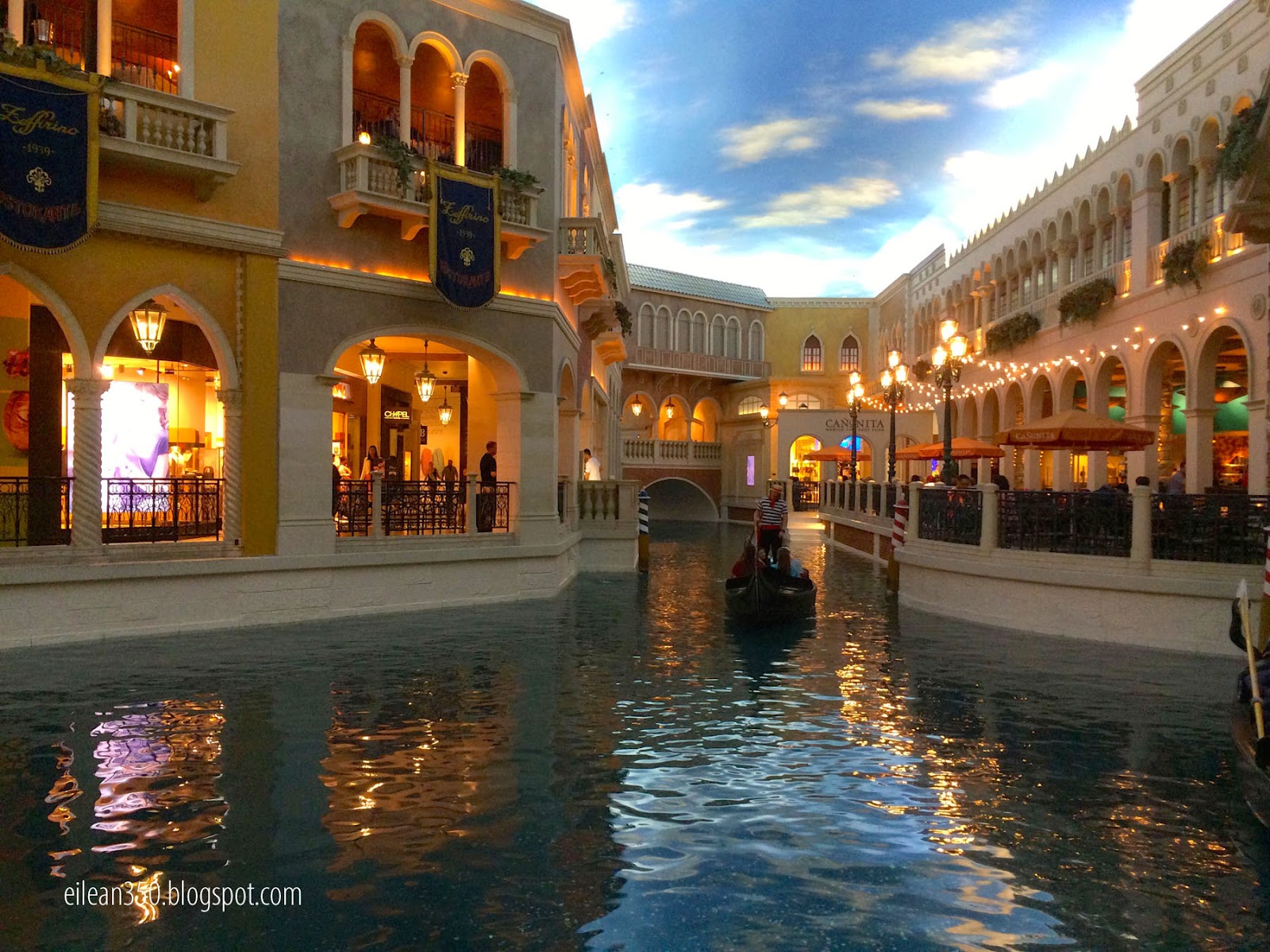 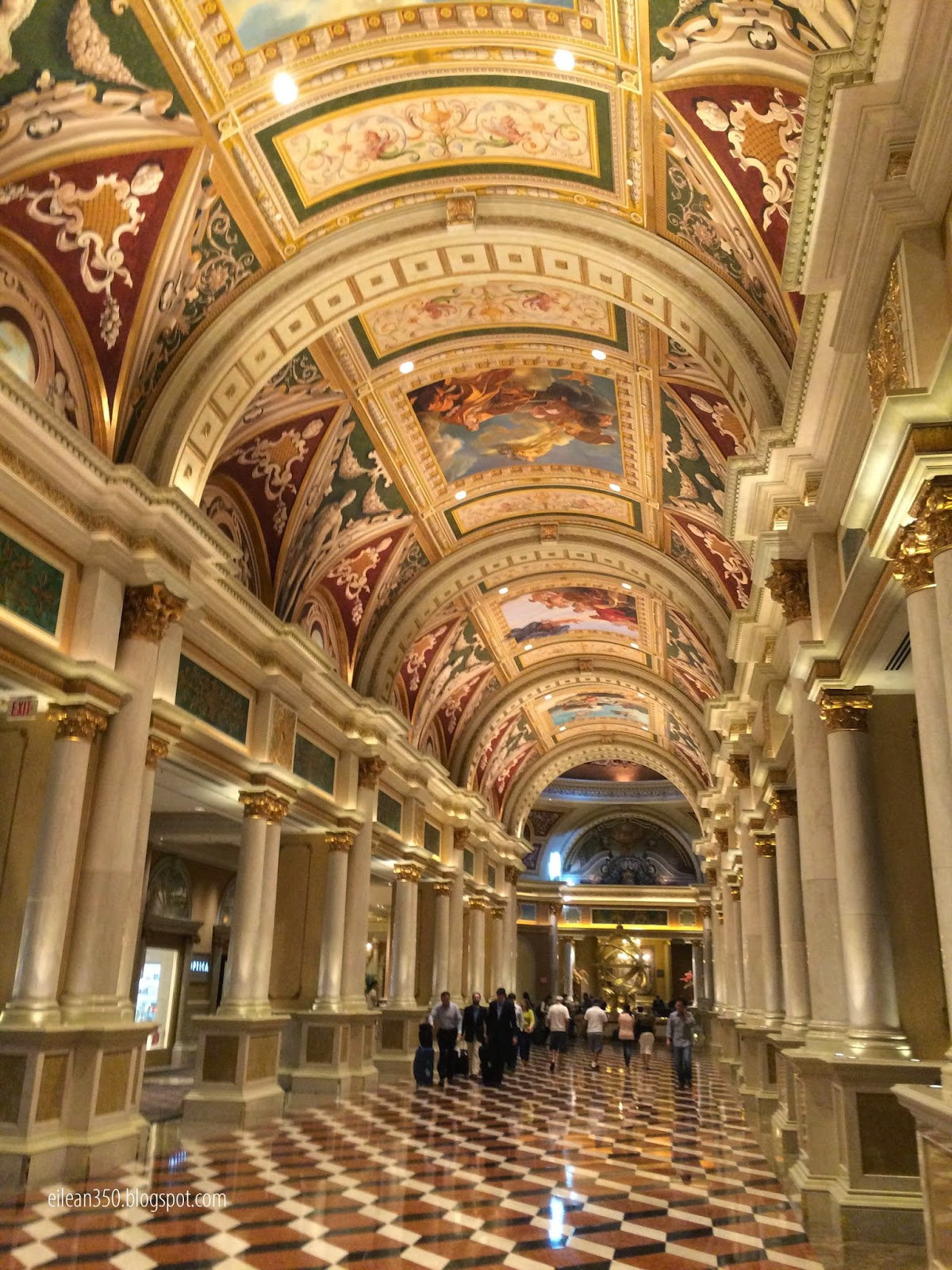 For the past month or so - my knee has been bothering me.
I even went to an Urgent Care Center when we were at Rons in Placerville.
I've figured it was an old high school skiing injury - torn cartilage - finally coming back
to haunt me.

Well after limping all around Las Vegas - I was getting back into the truck to head home,
and I heard and felt a sharp pop/crack in my knee.
The pain was excruciating.

After 5 minutes or so of "yell and cuss therapy",
I was finally able to drive home but upon arrival was unable to get out of the truck
and put weight on my leg.

Kate brought my computer out to the truck and I started to look
for Orthopedic Doctors who could see me NOW.

Eventually we found one - I drove there and they had someone wheel me into the building.
This is me leaving 2 hrs later. 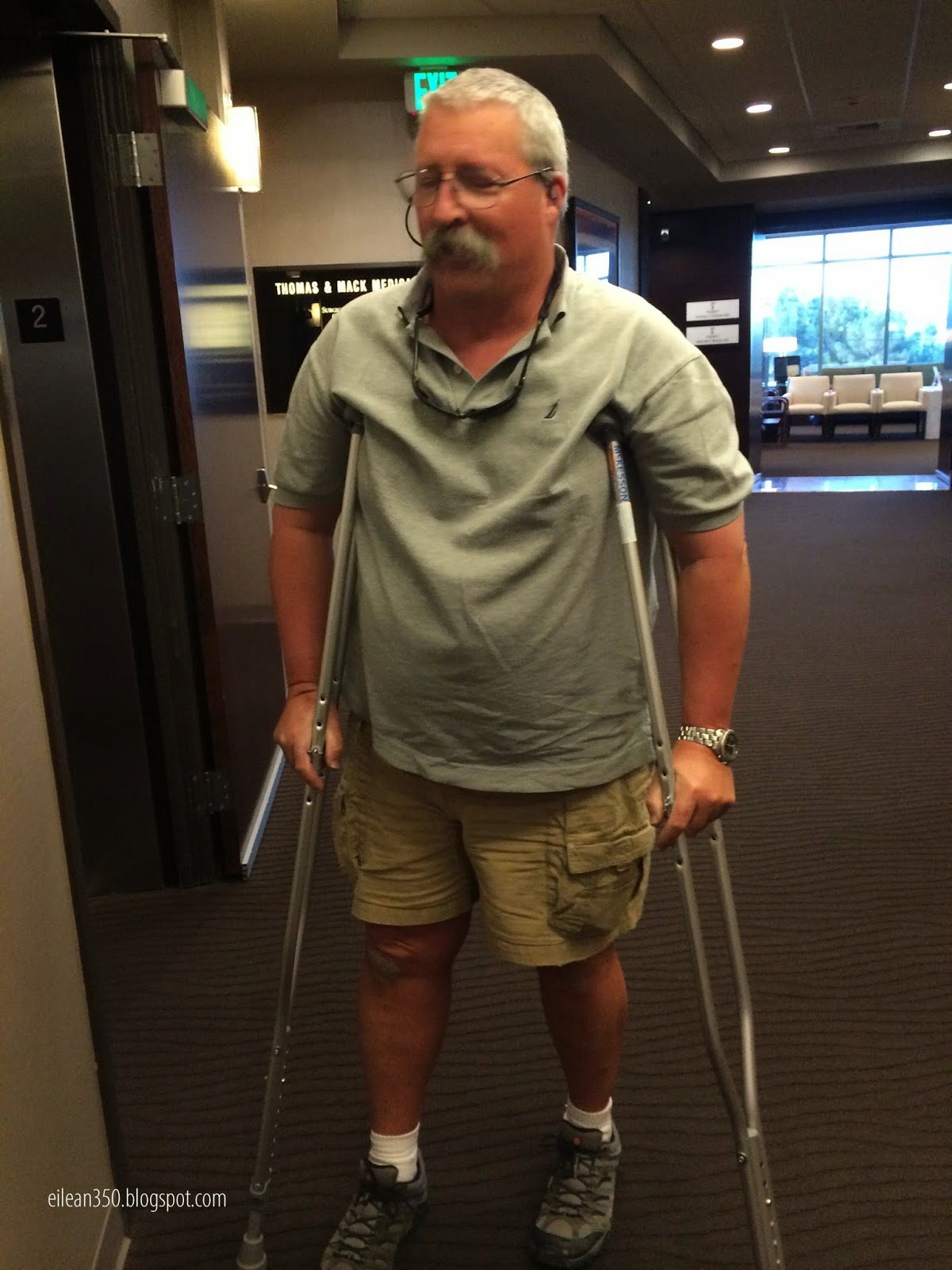 Appointments were made for an MRI which I had on Thursday,
and then a follow up with the Doctor on Monday (tomorrow)

36 hrs later we moved across town from our Luxury Motorcoach Resort
to the Las Vegas RV Resort.   Yes I drove the bus.

I spent most of the week just sitting and hobbling around a bit - each day I could
walk a tad better but the knee is still messed up.

On thursday our company convention ended
so my Boss Jay and his wife Leigh came to visit and I took them to the airport.
It was a nice visit - I always enjoy spending time with them. 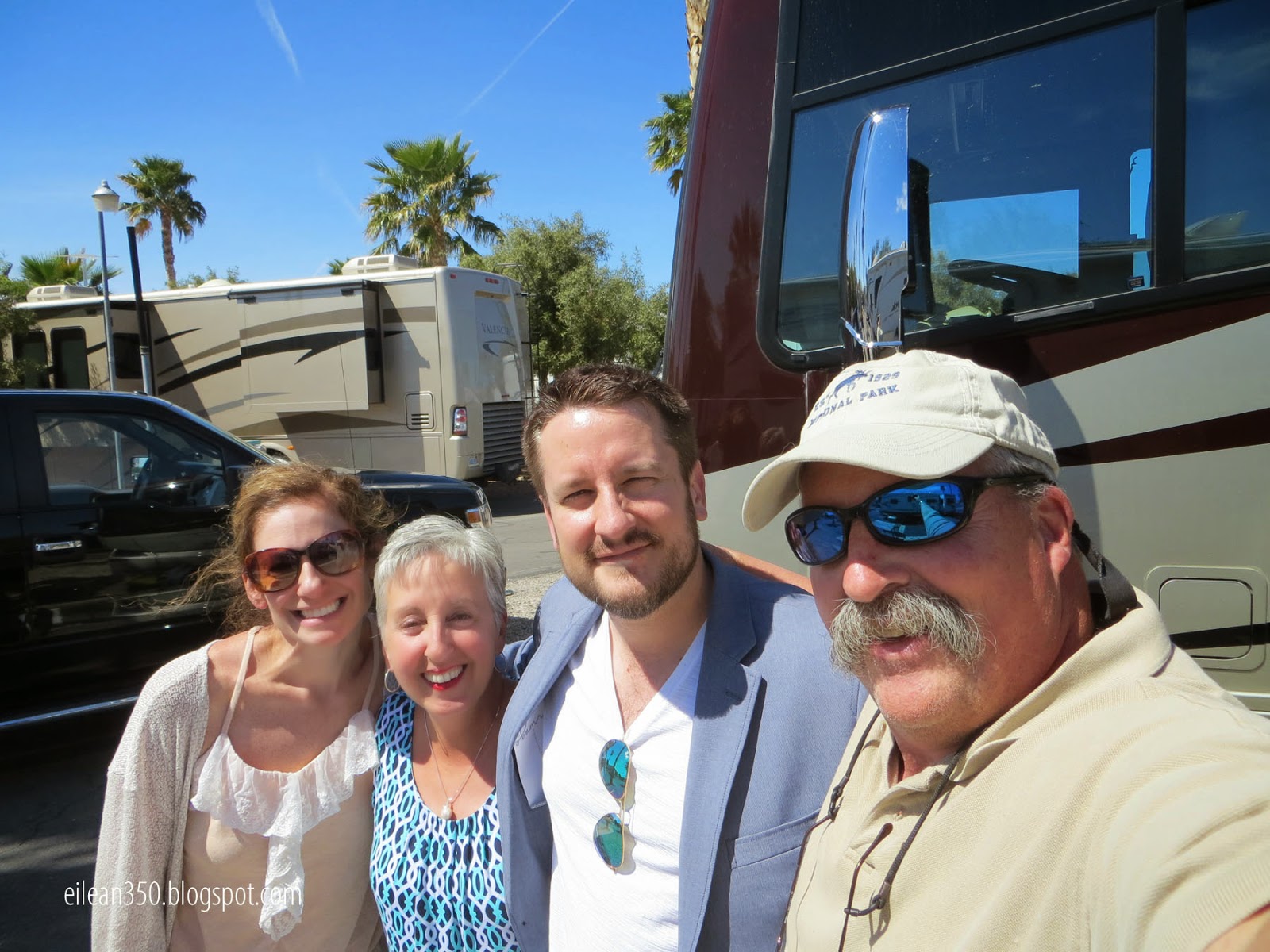 You might recall - we were here in Las Vegas in the first place so that I could fly to
NY for business...   Well I had to cancel that trip.  I would never have been able to
make it thru the connecting airports.

Jim & Kristi arrived at the park here last Sunday and on Friday
they packed me into the car and we took a drive to the Valley of Fire State Park. 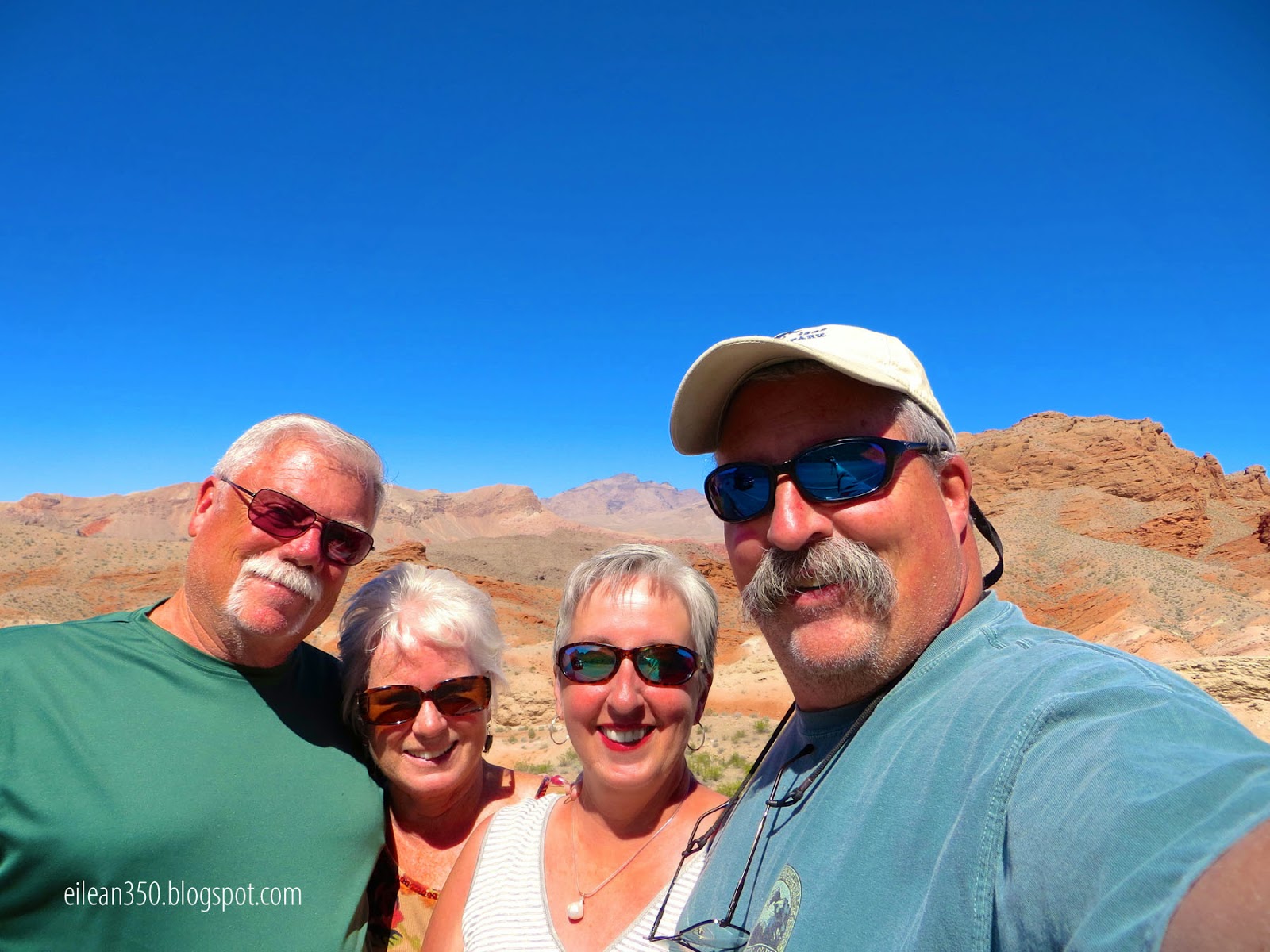 The park is a beautiful jewell just 45 miles or so north of Las Vegas. 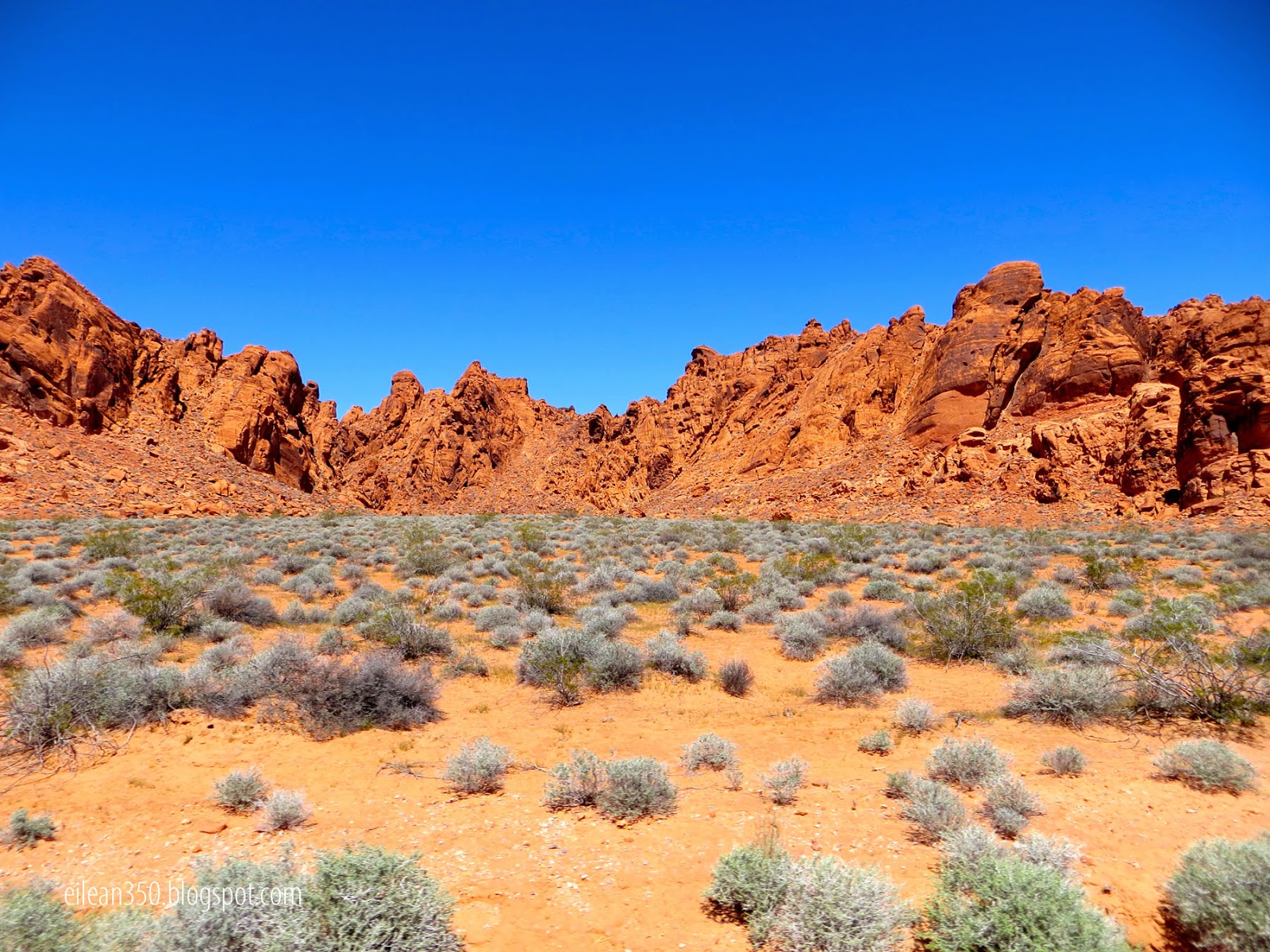 We drove the shore road north along Lake Mead instead of taking I-15.
Good call Jim.

We had a nice picnic lunch and were visited by these ferocious carnivores.
We did not have the Doodles with us to protect us from them. 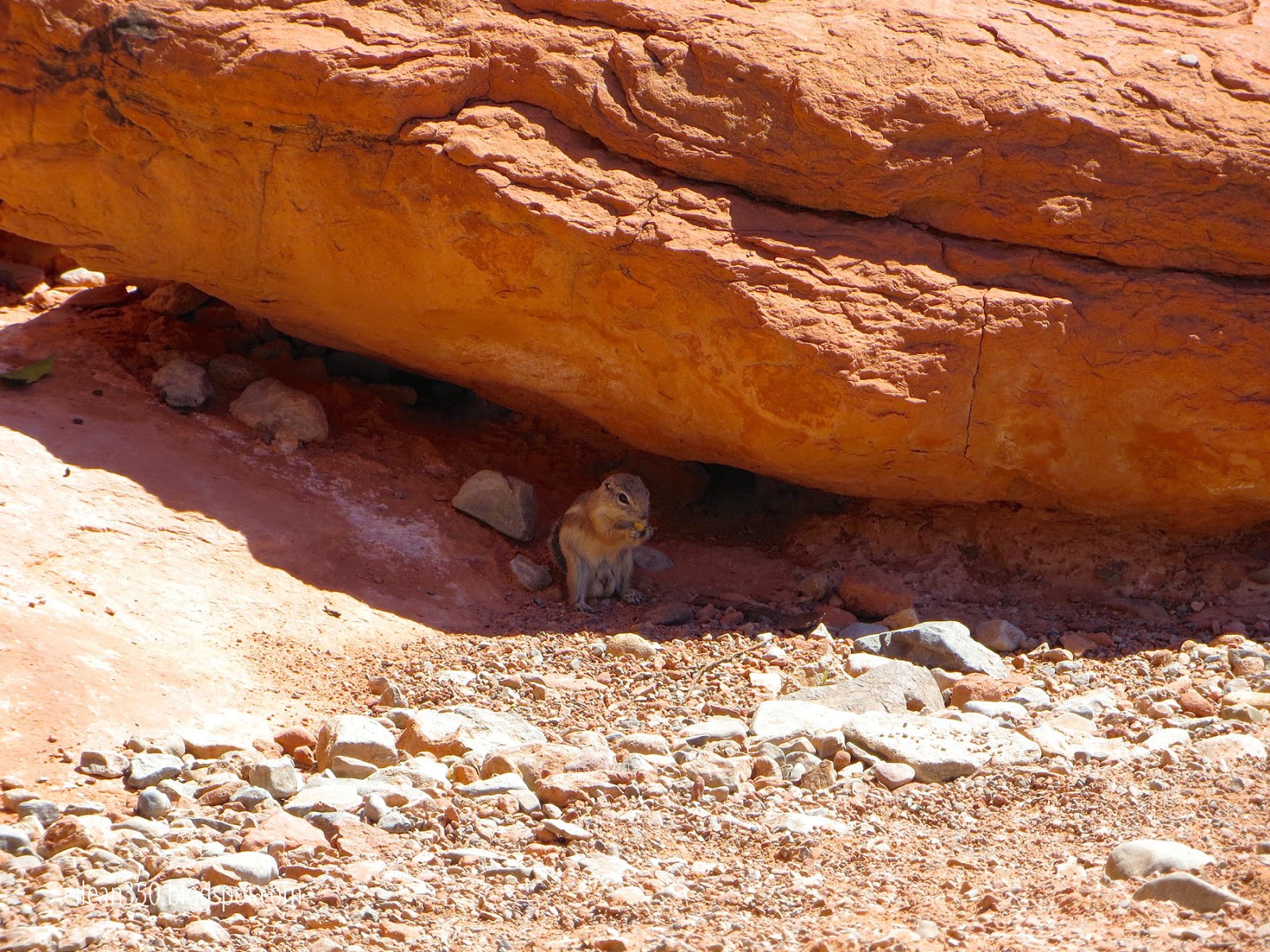 The colors in the park are quite amazing. 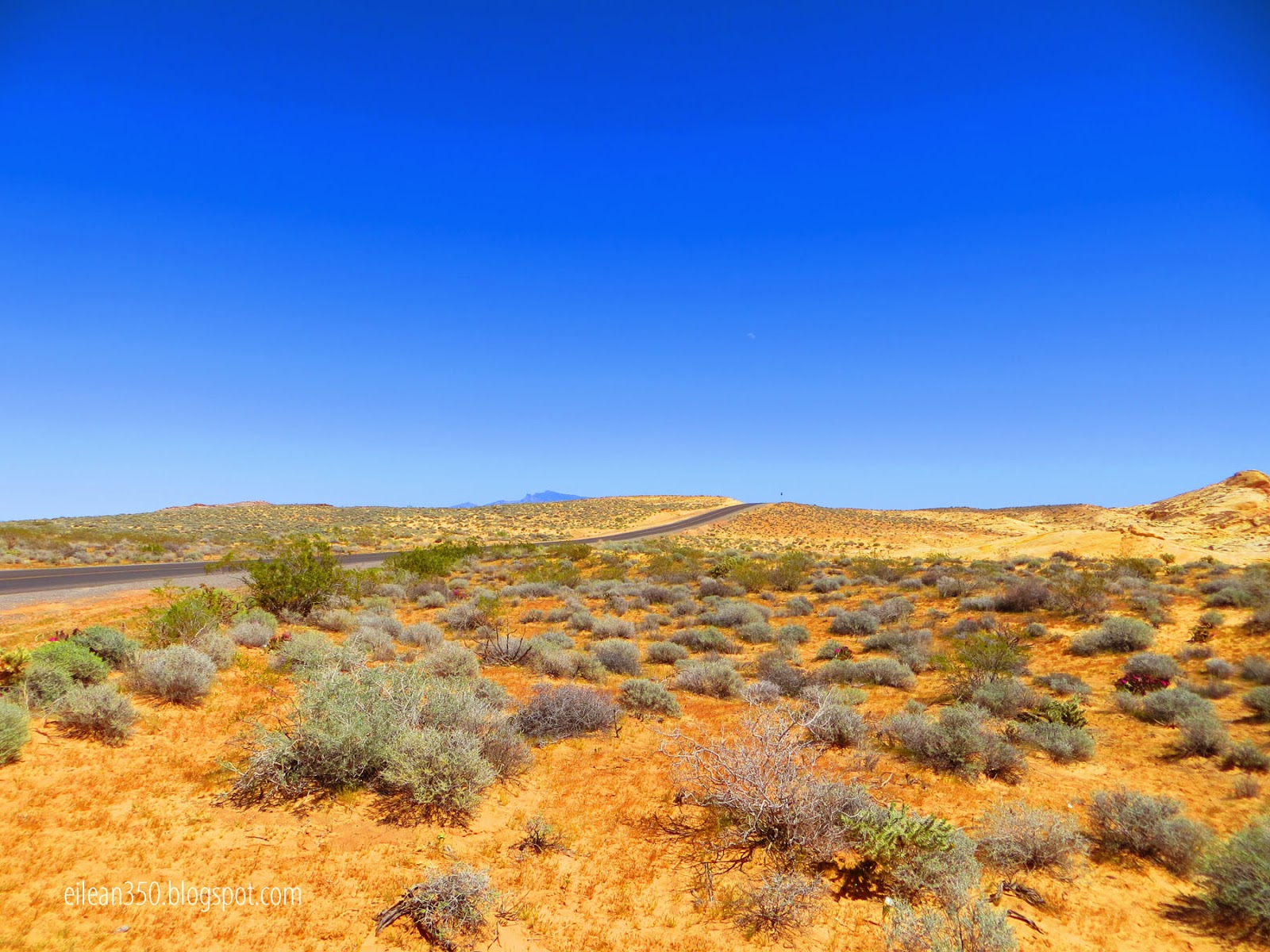 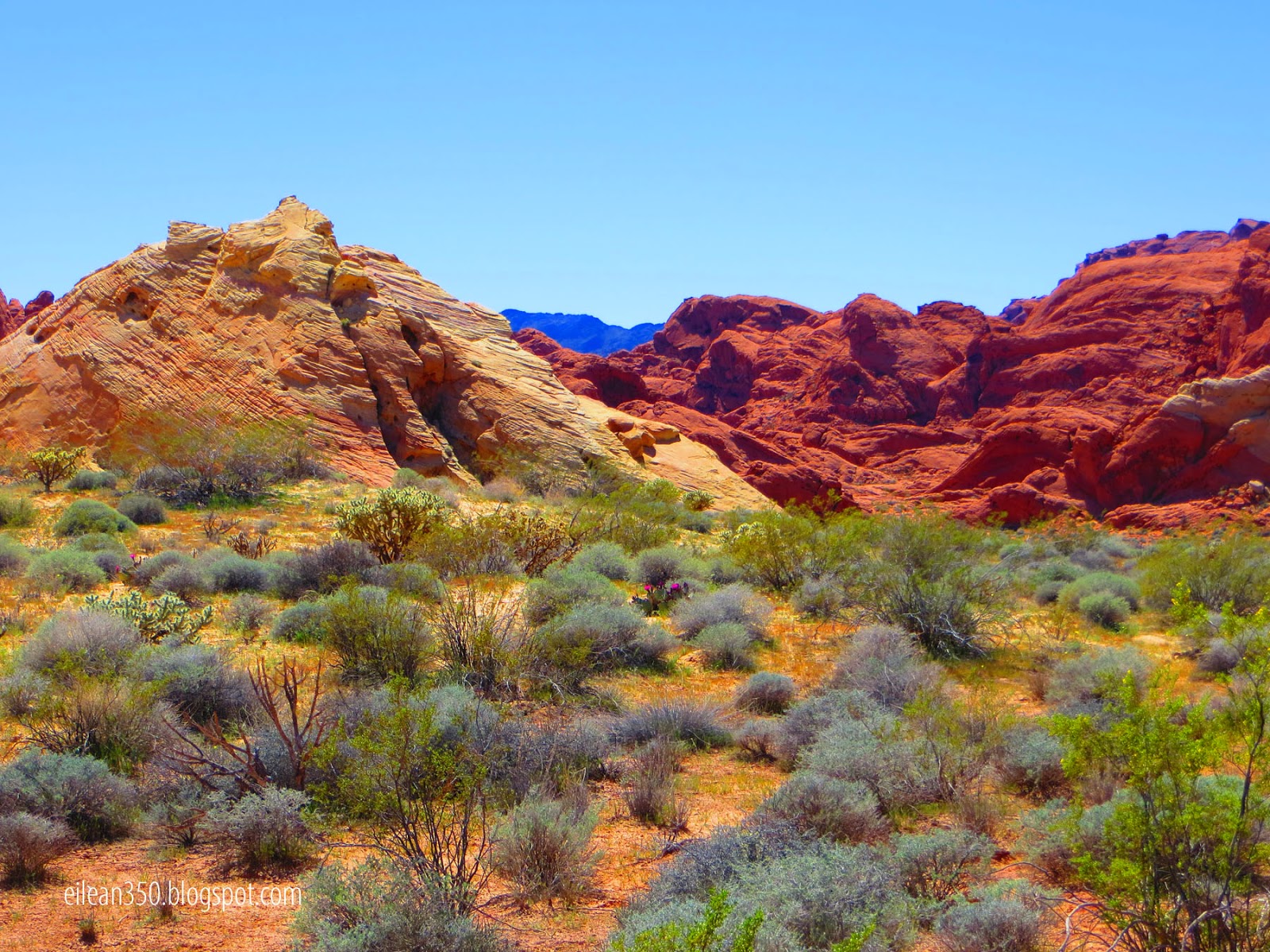 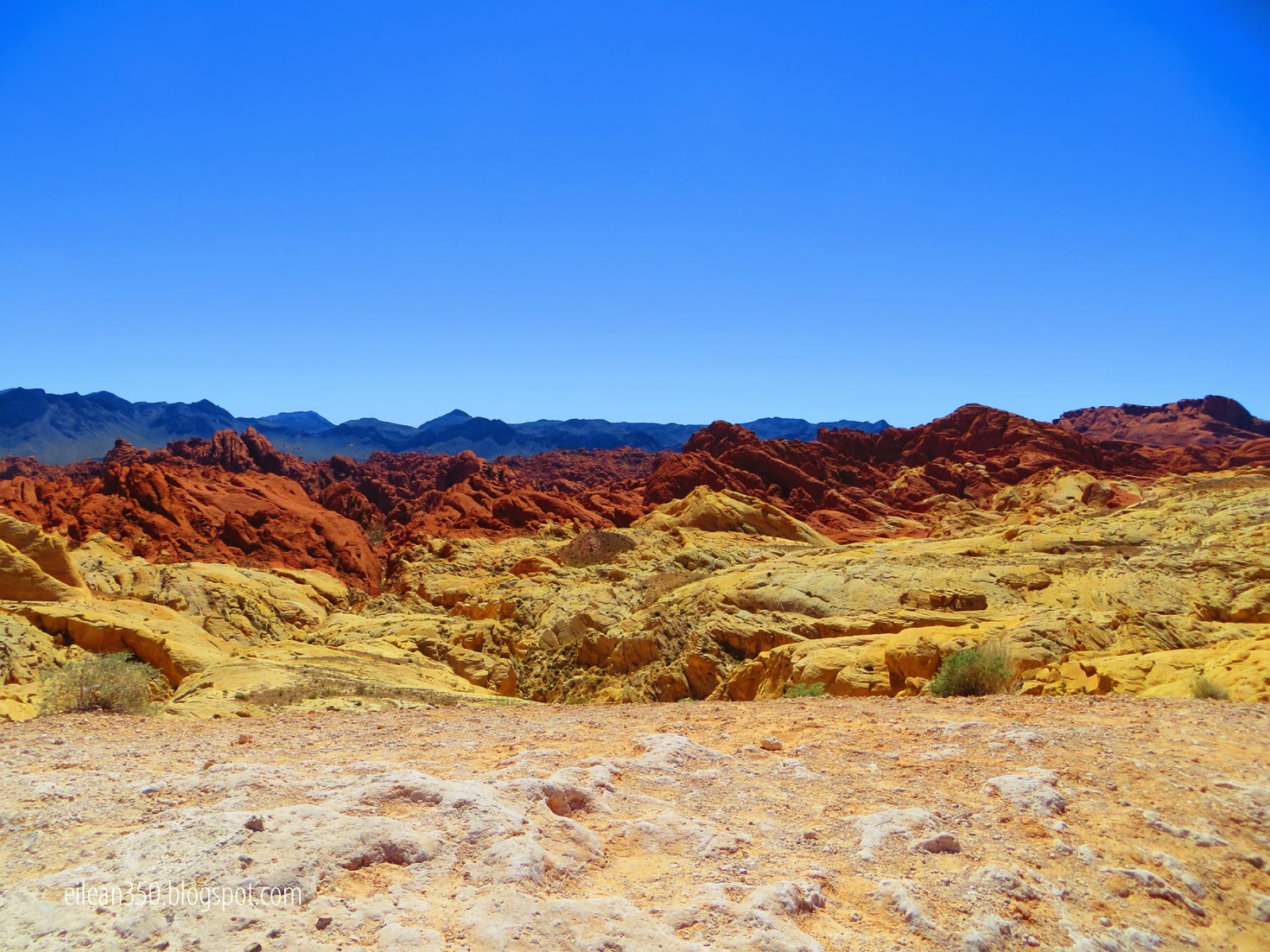 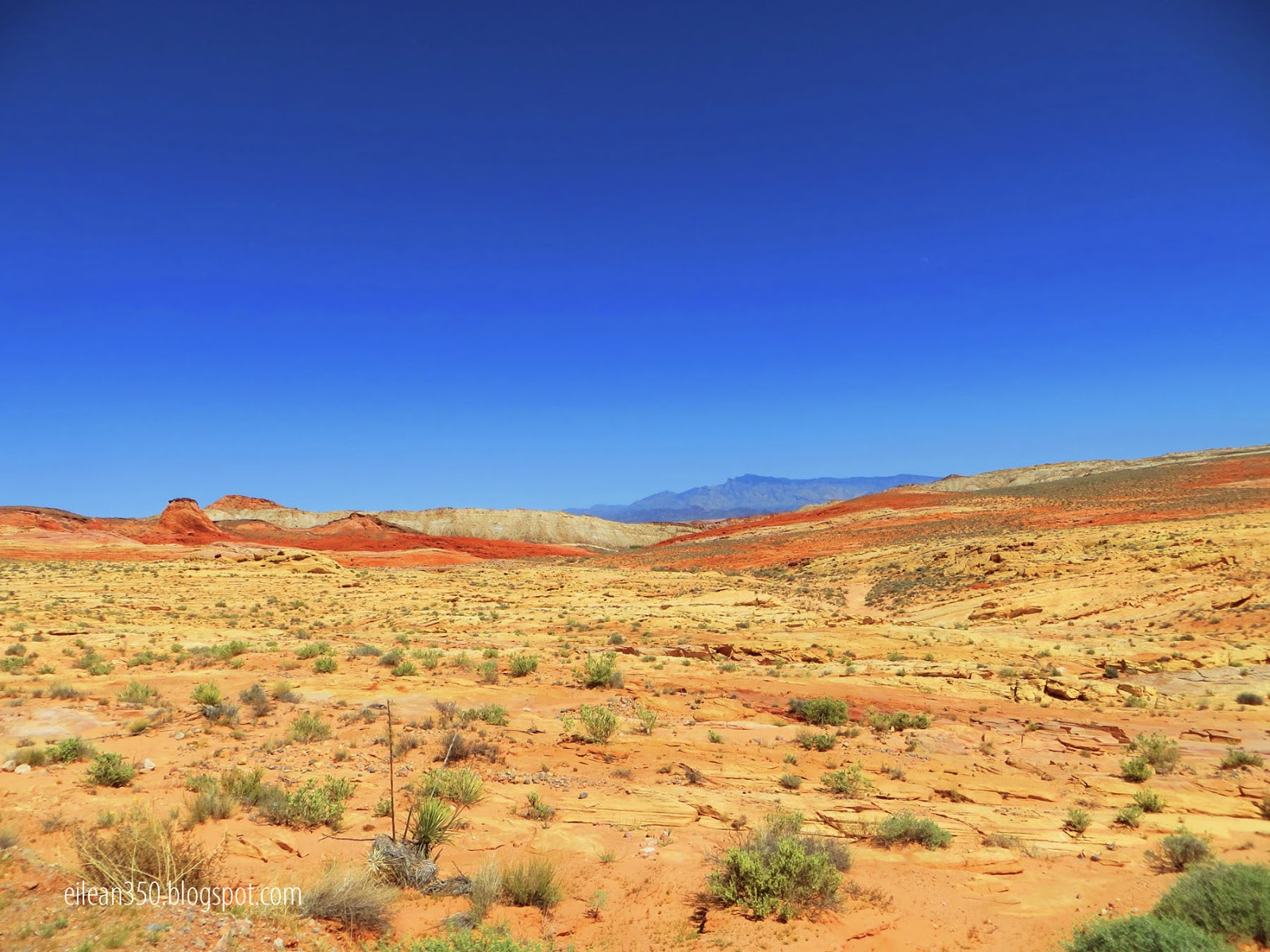 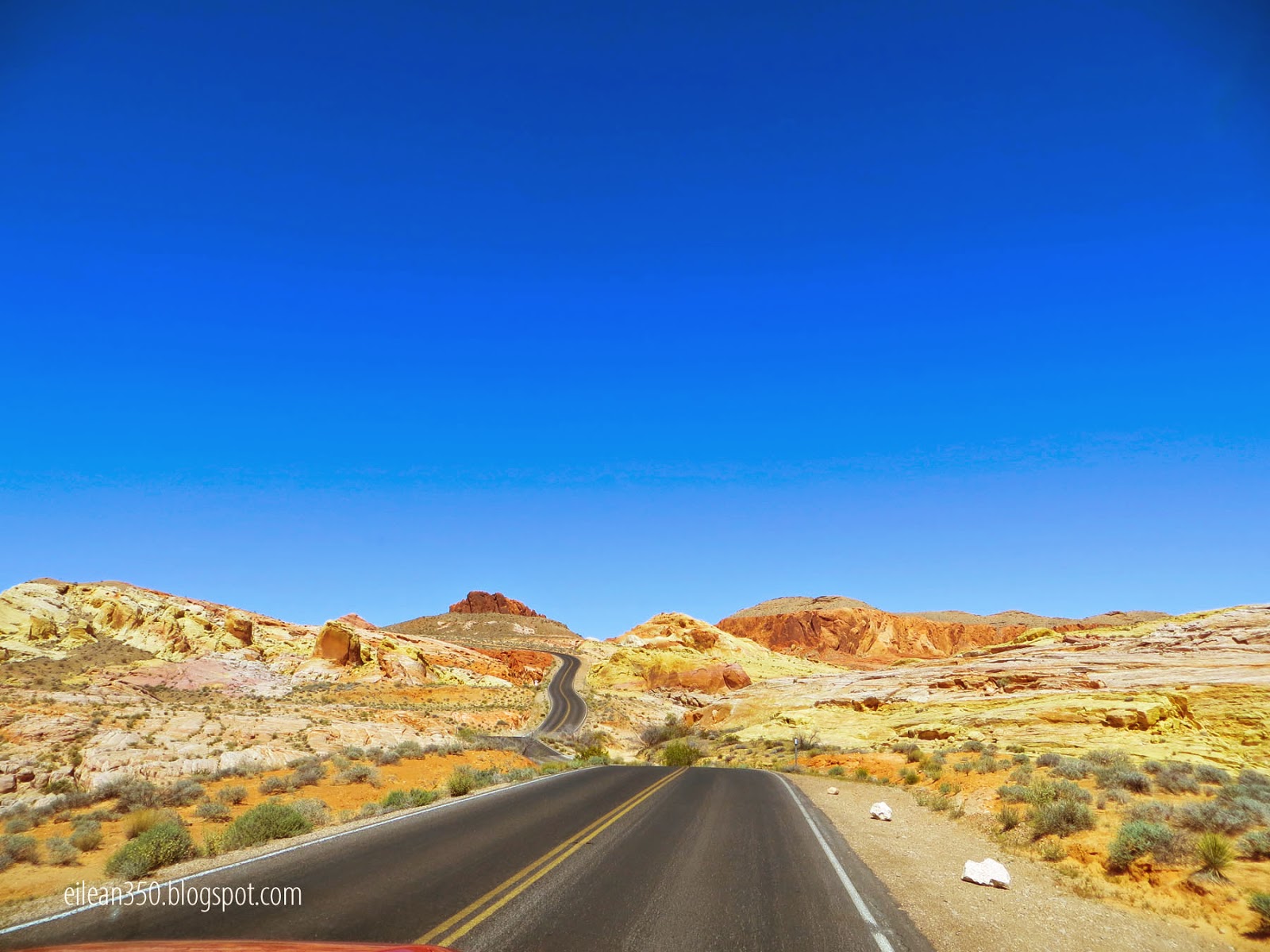 Saturday morning I had to do a little maintenance on the coach.
My transfer switch has been acting up and I knew it was only a matter of time
till it left me stranded.

If the switch died I'd have no shore power, my generator would not be able to
power the coach and I'd have no way to recharge batteries other than running the engine.

So rather than replacing it with a similar simple switch, I got one with larger
65 amp contacts as well as multi tiered protection (surge, high/low voltage, etc)

The install was simple other than it being done in the sun and was hot hot hot!

Here it is wired in and ready to close up. 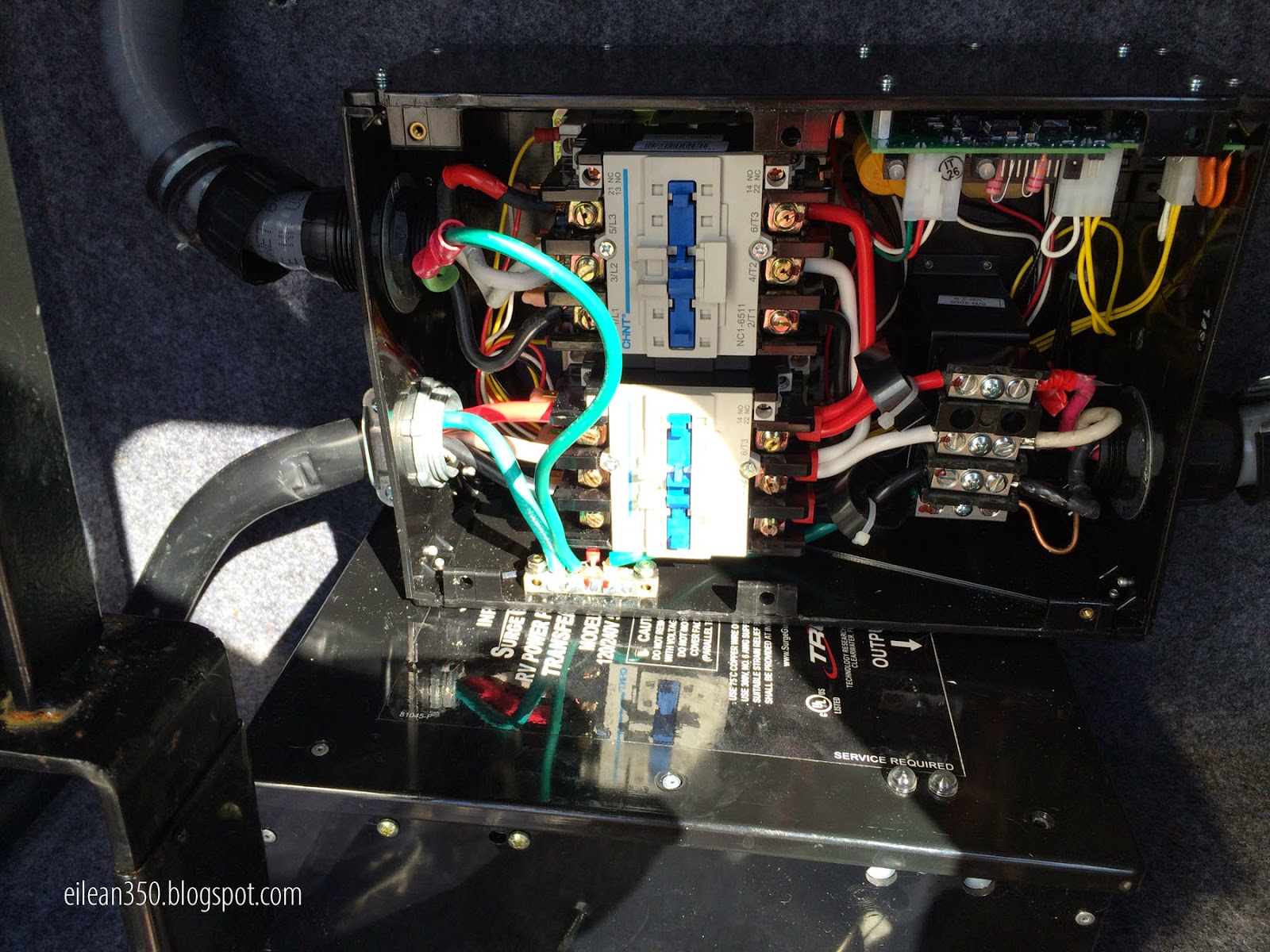 Once done, I turned the shore breaker on and smooth as silk - we electrified.

Jim & Kristi's week here was winding down.  With my knee uncertainty
I did not know when we might be able to leave town so instead of traveling together
with us they were going to head home for a month.

So last night we had a good bye dinner and more importantly a
21st birthday bash for Kristi.

We went to a Brazilian Steak house.
If you have never been - and you like meat - you need to try it.
Basically they had 16 different types of barbecued meats.
They were barbecued on skewers and the
"gauchos" would walk around and carve off slices from the skewers right to your plate.

Our host took us on a tour of the kitchen where we saw the meats cooking.
Beef, Lamb, Pork, and Chicken.  Numerous types of each. 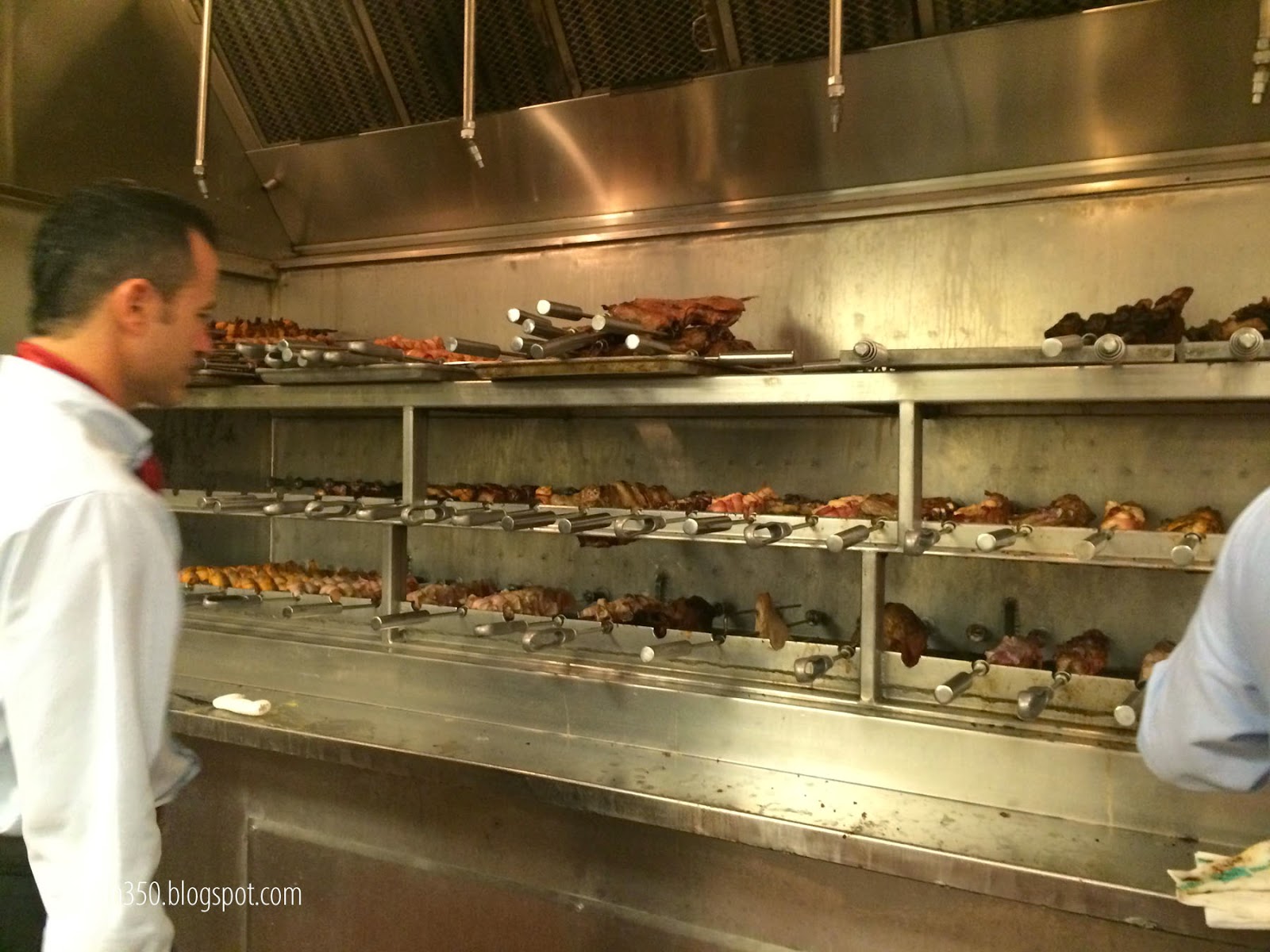 The birthday girl and her cake. 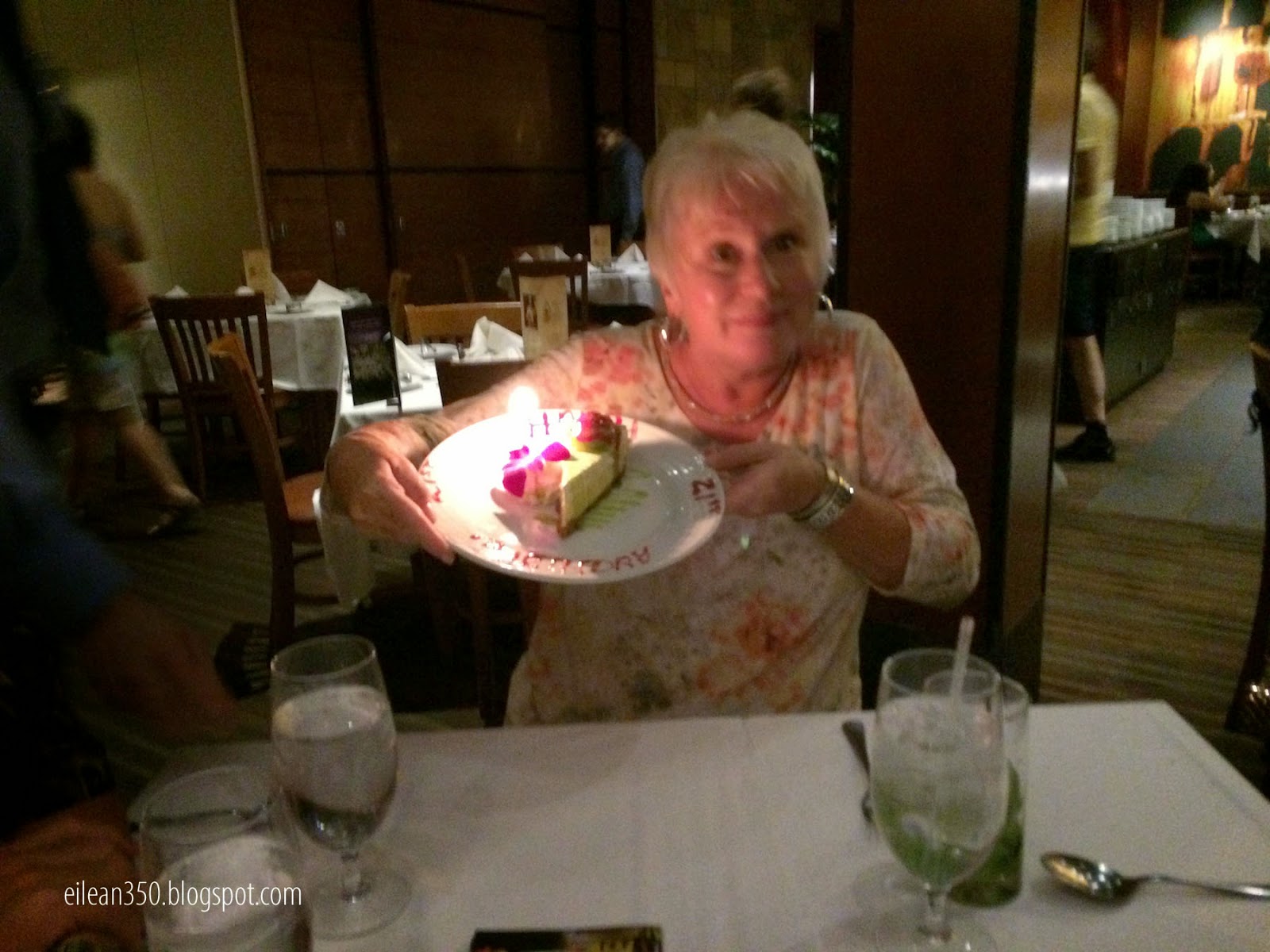 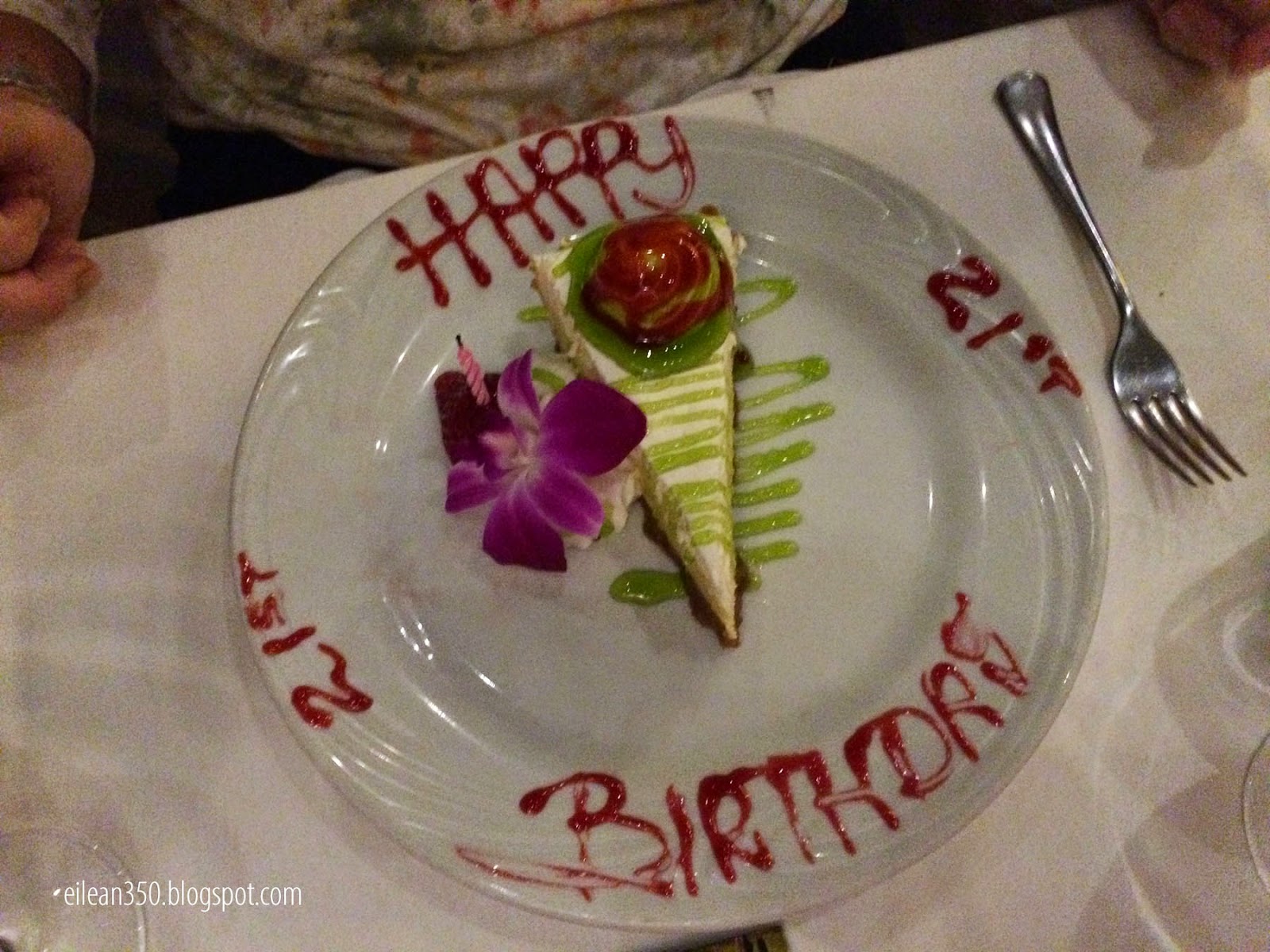 After dinner we did the Vegas thing by taking a night cruise of the strip. 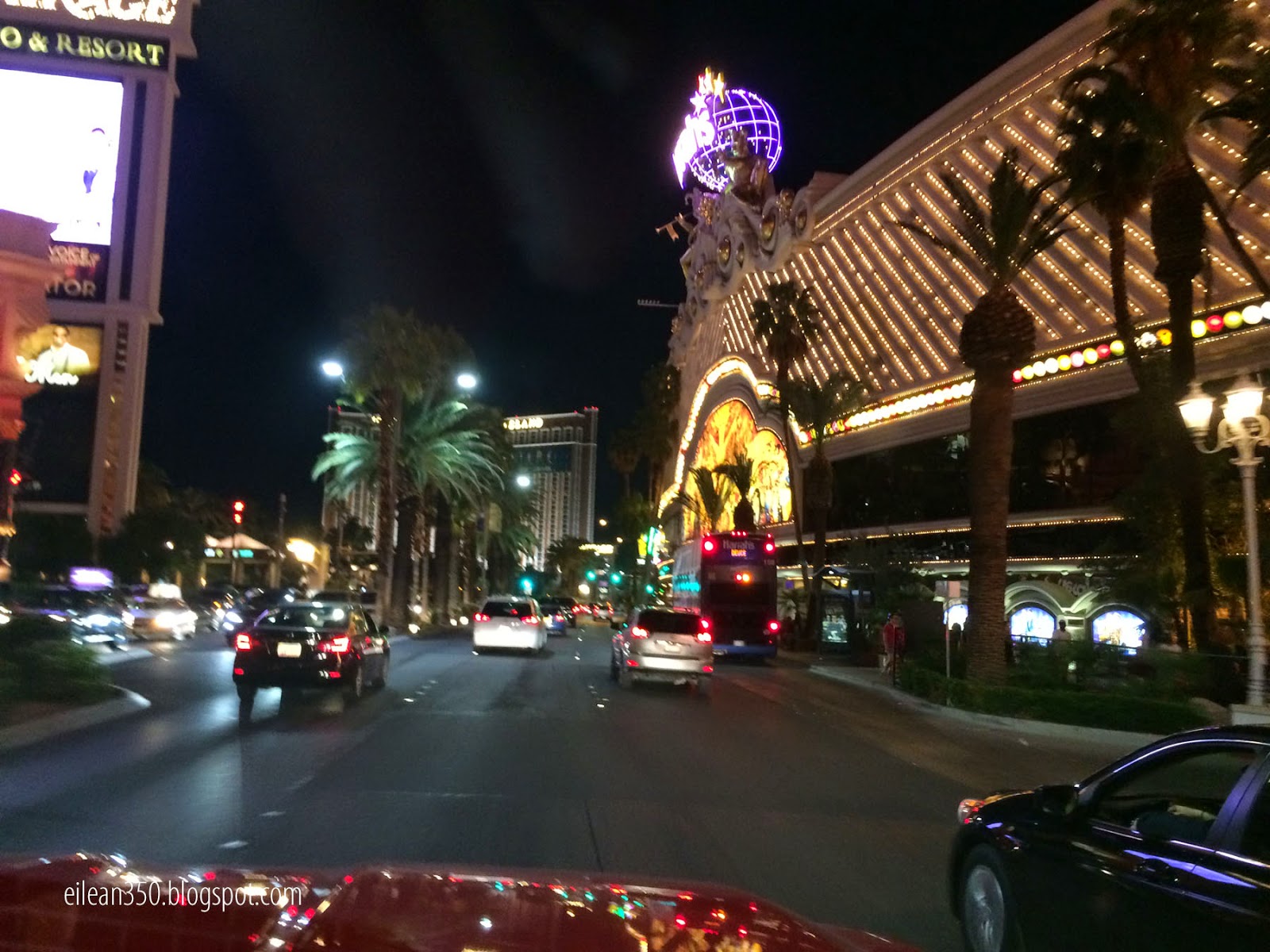 This is an iconic old sign in front of the Frontier Casino in Old Town.
The hand used to move up and down while the cowboy said Howdy Partner.
Now it doesn't move or talk. 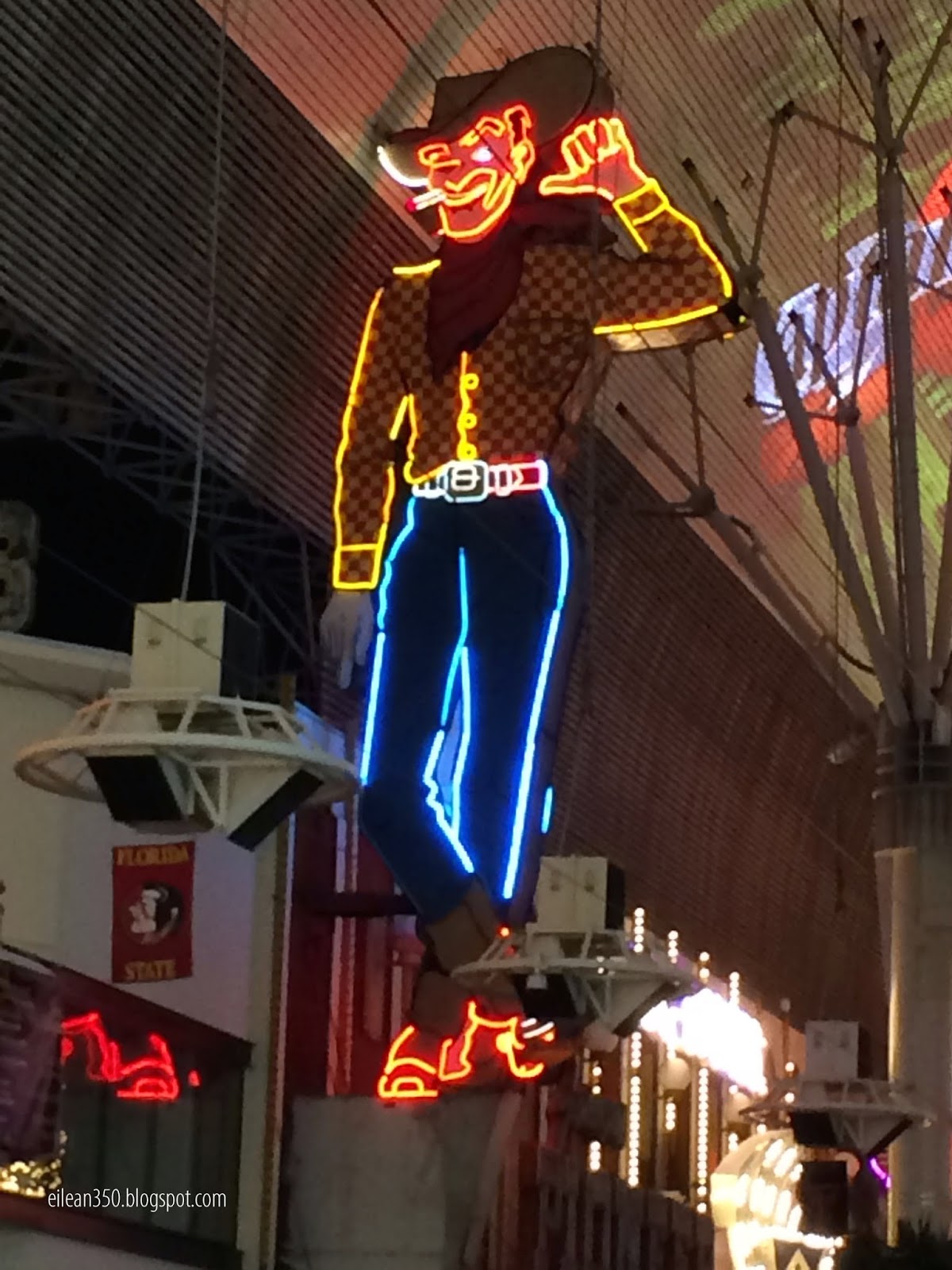 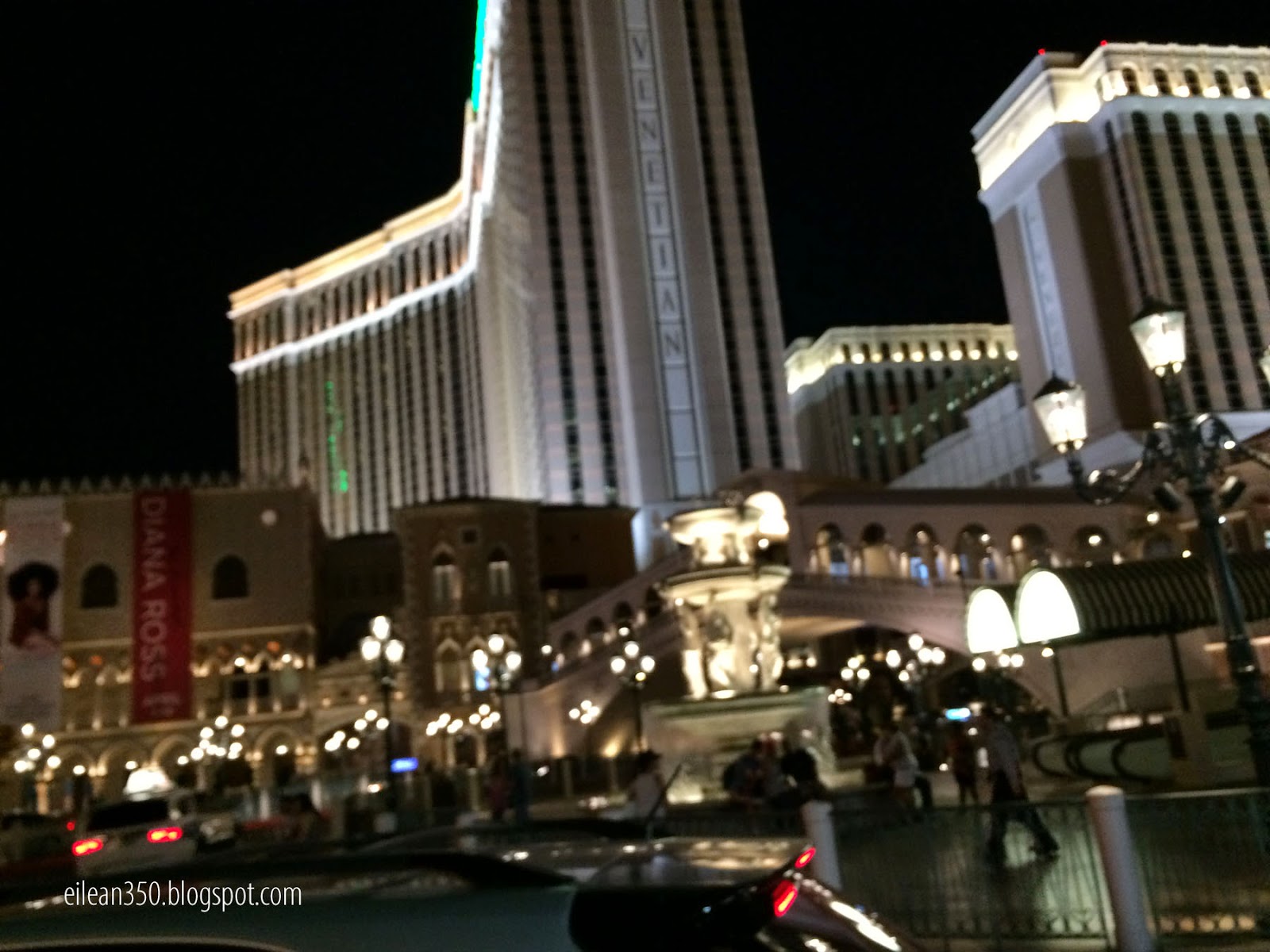 The clown at Circus Circus gives me the creeps...
It reminds me of the Clown from Steven Kings novel  "IT" 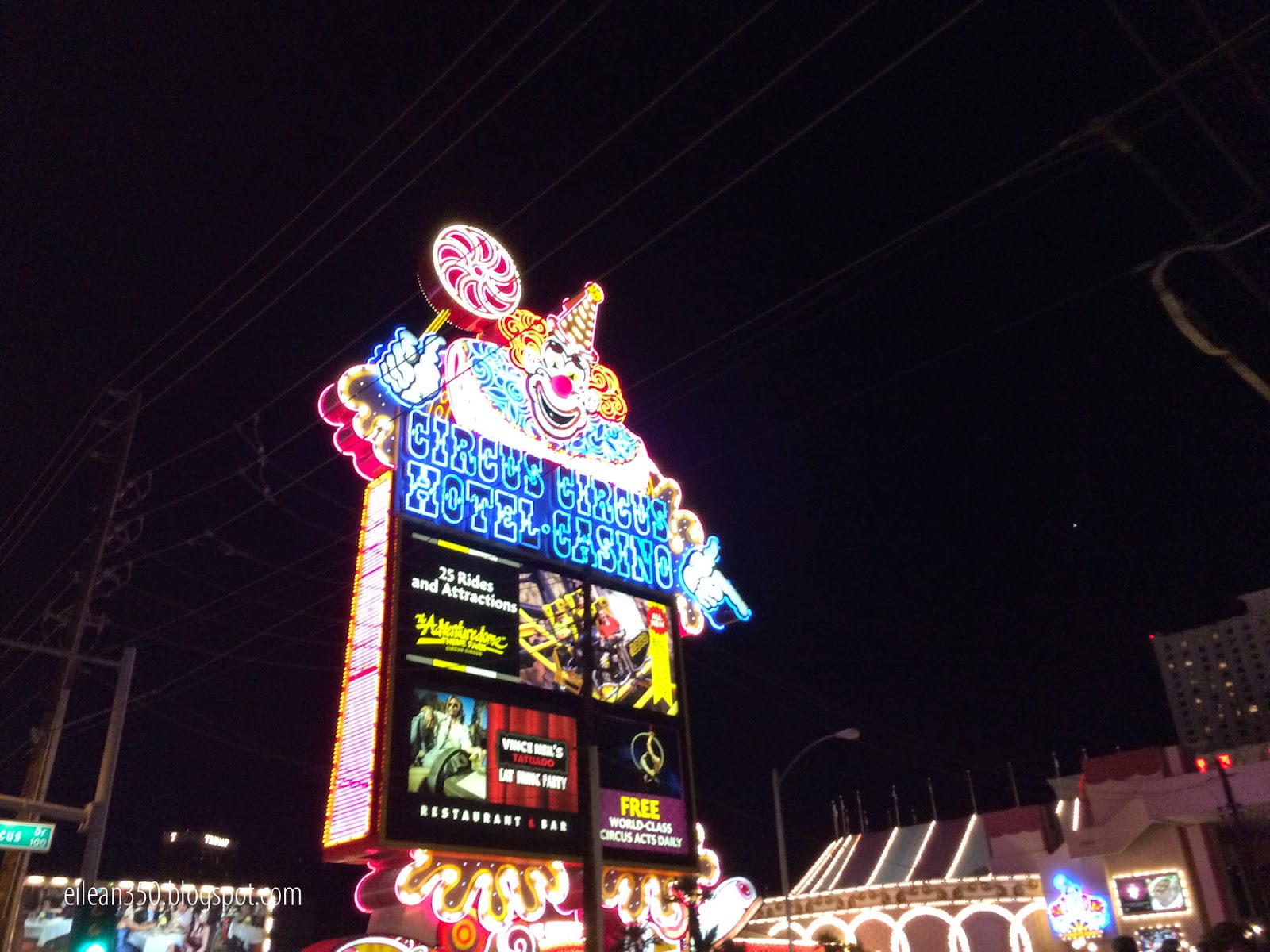 Well its Sunday.
Jim & Kristi hit the road this morning.
Tomorrow morning I see the doc and figure out what the plan will be.

I'm pretty sure that I am going to need arthroscopic surgery on the knee.
The doc agreed with my diagnosis last week and the MRI is to confirm it.

So if right - the questions will be when and where.

The doc here is actually one of the best in the country but I don't want to spend
a long time here if the recuperation time will be lengthy.

But I'm getting ahead of myself.
We are in limbo right now - hopefully tomorrow we'll have a plan.

Bottom line - It's all good!