The curse of the Homolovi

When Kate did the Homolovi dance I warned her that she could be unleashing
a pandoras box of ancient indian curses.
I'm starting to think that she did.
After her dance we hooked up and headed down here to the Sedona area...
As soon as we started driving, a device in the truck that monitors the pressure & temp of
the trailer tires malfunctioned.  I'm waiting for a replacement to
be overnighted to me on Weds.
Two days ago I noticed that a vent cover on the roof of the coach had blow off.
Yesterday my Verizon internet device malfunctioned and blew out the Sim Chip.
We drove over to Prescott (1 hr) to replace the whole device but they only had the
sim chip.  They will overnight a replacement device on Weds.
(sound familiar?)
We at least have internet for now but I'm hoping the defective device doesn't blow out the new
sim chip while I await the replacement to arrive.
If things run in 3's then perhaps we are ok now.
But if not........
Anyway...
Yesterday we traveled over the big mountain to Prescott to pick up the simm card.
A few pix of the day: 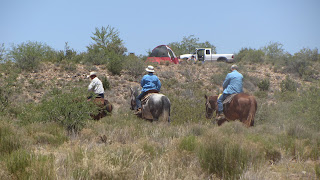 Coming back from Prescott (pronounced Presskit) you travel AZ 89a over the mountains.
Up to 7,000' then drop down rapidly thru the town of Jerome (where we had lunch with Paul
the other day) and continue down to Cottonwood at about 3,500'
Here is a pix looking down the canyon toward Cottonwood about
2,000' below.  Sorry but we only had the little camera so the pix are not the best. 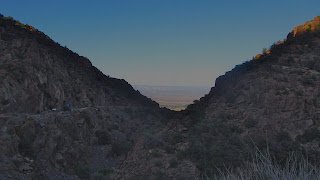 The winding, narrow, steep road descends into Jerome.  At times the road is so narrow
that I was using every bit of pavement between the guard rail and the center line,
trying to keep my wide rear axle on my side of the road. 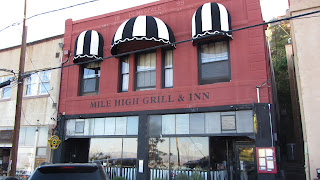 A mining town, Jerome was established on the side of Cleopatra Hill in 1883.
It was named for Eugene Jerome, a NY investor who owned the mineral rights

and financed mining there. Eugene Jerome never visited his namesake town.
Jerome was incorporated as a town on March 8, 1899. Local merchant and rancher
William Munds was the first mayor.
The town housed the workers in the nearby United Verde Mine,
which was to produce over 1 billion dollars in copper, gold and silver over the next 70 years.
On 5 February 1903, the New York Sun proclaimed Jerome to be
"the wickedest town in the West".  A hotbed of
Prostitution, gambling and vice.
In 1915 the population of Jerome was estimated at 2,500.
The 2006 census put it around 350.
Every time the poorly treated miners would attempt to unionize, the mine would hire
armed security guards to forcefully round them up and ship them in cattle cars
to the desert where they would be unloaded and warned under threat of death not to return.
Our lunch with Paul in town the other day, you might remember was in
a Mexican restaurant that had all of these painted cattle skulls.
We did not have a camera with us at that time so when we passed thru town
yesterday, I pulled over to the side of the narrow street and Kate rushed
in to get this shot. 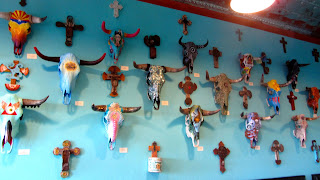 Each one is painted by a different artist.   They were really cool!
Every time Kate leaves the truck, the Doods go on red alert until she returns.
Here they are in the back seat looking for her. 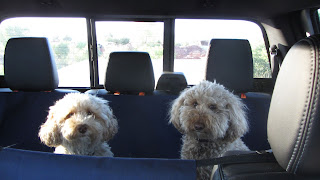 I am still on my quest for a picture of the elusive Roadrunner, but the rascals
continue to confound me.
Yesterday I was sure that I took the camera..
When looking at some available building lots, we were stopped on a quiet road in this
beautiful rural subdivision and all of a sudden, a whole family of about 10 babies and
two adults walked right in front of us.
I scrambled for the camera.......
Where the heck is the camera????
Where the heck is my iPhone???
Get me a paper and pencil...  I'll draw them!!
By the time that we found a camera - they were gone into the bush.
Fear not.....  I'm still on the trail.
Posted by GregK at 9:30 AM