I'm currently riding the high speed train from Madrid to Seville and thought this might be a good time for a quick post.
Yesterday Kate drove me 3 1/2 hrs to Raleigh Airport and dropped me off at 2:30p for a 6p flight. I wanted her to drop me off that early so that she would not have to make the long drive home alone In the dark. My plane was delayed another hour and a half so I had plenty of time to do nothing waiting for my flight.
I arrived in London Heathrow and had a couple of hours to kill before my connecting flight on British Airways to Madrid. That flight landed on time and I hit the ground running.  This is landing is Madrid 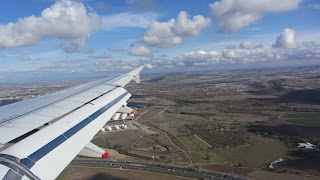 My goal was to try to catch the 1600 train to Seville. I had a reservation on the 1700 train to play it safe but if I could get thru customs etc I wanted to get to Seville earlier.
I had done my research and found that I could grab an express bus from the airport that only cost 2 euros to the train station-a 40 min drive.
In no time at all with the modern luggage handling system,  I found my luggage and headed out the door 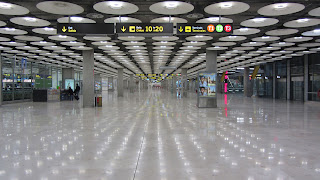 Next I found the bus, got on it and settled in for the ride. It made stops at the other 2 terminals and by the time it left the station this bus was PACKED!
The drive was uneventful and the little that I saw of Madrid, it is a beautiful city. Arriving at the train station my next challenge was to find the ticket office. With the language barrier it is good that I had done my reasearch down to the finest degree and I already knew where in the station the ticket office was located and which line I had to stand in.
It all paid off since I made the train with 10 minutes to spare!  I was able to use those 10 minutes enjoying the amazing indoor rainforest that was created in response to 2003 Madrid Train Bombings. 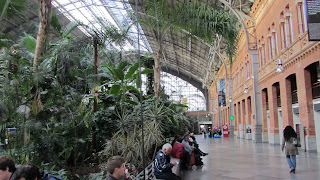 Once on the train I texted John (my fearless capt) who is staying in the same hotel as me, to let him know that I made the earlier train, and when to expect my arrival.
This is my train on the right 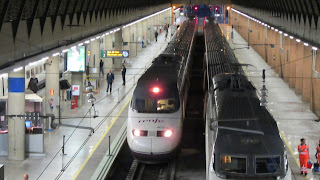 This is inside the car. 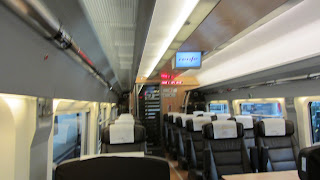 He texted me back that it was good that I made the train as we have reservations for the Flaminco dancers 1/2hr after my train arrives. Sooo.... I still have a bit more running before this endless day draws to a close.
The train is great! 190 mph and smooth as glass. They bring around hot towels, wine, sandwiches, apple pie, chocolates, and more hot towels. Plus if it's more than 5 minutes late your trip is free. Howz that for service!
Well it's 15 min to Sevilla so I need to get this posted and put my running shoes back on.
Greg Kerlin
Sent from my iPad
Posted by GregK at 10:16 AM