Anyone know that song??   I'm sure plenty do.

Well we are here in the home of the Big Texan Steak Ranch.   Unfortunatly tonight I had a boatload of work to get caught up on and couldn't leave the Camper.  We plan on staying here tomorrow and take a "down day"  For me it will be more getting caught up on work day.

I'm having problems connecting to my servers in NY and when I do the connections have been agonizingly slow so it takes me 3x as long to get things done.   Not quite sure what the problem is - last year it all worked like a charm.  Our techies say "we didn't change anything" yet the server they don't administer I can still connect to just fine - only theirs is the problem.... Oh well enough of that. 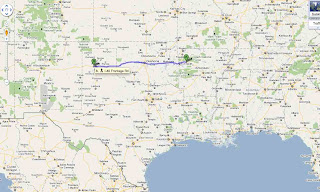 Add another 500 miles to the trip log and we are over 1,600 miles.  As Jim said - we've attained escape velocity!
There are forecasts for high winds, perhaps some snow flurries in Colorado (at low elevations) and other weather hazards so I am currently evaluating our route when we leave here.   Our original plan would take us over Wolf Creek Pass in Colorado a song about it by CW Mcall described it as 37 miles of Hell.   Not a fun place to pull a trailer if its snowing.  I hate to miss it though.   It's a great ride in good weather and I'd like Kate to see it.
Tomorrow I'll get some more pictures posted...  for now I'm done driving, working, blogging, and now I gotta go walk my doodles.
I'll leave you with some lyrics from Wolf Creek Pass:
I looked at Earl and his eyes was wide, his lip was curled, and his leg was fried. And his hand was froze to the wheel like a tongue to a sled in the middle of a blizzard. I says, "Earl, I'm not the type to complain; but the time has come for me to explain that if you don't apply some brake real soon, they're gonna have to pick us up with a stick and a spoon." Well, Earl rared back, and cocked his leg, stepped as down as hard as he could on the brake, and the pedal went clear to the floor and stayed there, right there on the floor. He said it was sorta like steppin' on a plum. Well, from there on down it just wasn't real purdy: it was hairpin county and switchback city. One of 'em looked like a can full'a worms; another one looked like malaria germs. Right in the middle of the whole damn show was a real nice tunnel, now wouldn't you know? Sign says clearance to the twelve-foot line, but the chickens was stacked to thirteen-nine. Well we shot that tunnel at a hundred-and-ten, like gas through a funnel and eggs through a hen, and we took that top row of chickens off slicker than scum off a Lousiana swamp. Went down and around and around and down 'til we run outta ground at the edge of town. Bashed into the side of the feed store... in downtown Pagosa Springs.
Posted by GregK at 7:32 PM