From Gurnsey the Trail continues to snake northwesterly along the North Platte River until Casper Wy at which point the N Platte turns southward and no longer guides you toward the west.
It is here - at Caspar - that we need to cross over to the far side of the river, leave it's lifegiving waters, and strike out across miles of desert with only limited watering spots in between.
Some emigrants chose to pay for a ferry service at Casper.  Other chose to cross at a place called Bessemar Bend.  This is just about 10 miles south of Casper.  Here is where they crossed as Bessemar Bend 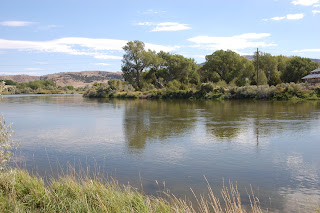 From here, there was about a 45 mile trek across dry windblown sage prairie, with only one watering hole in between.  At the end of that 45 mile treck was another feature on the trail - Independence Rock - and more importantly the Sweetwater River, which we would now follow until crossing the continental divide at South Pass.  Relatively unchanged since that day - this is what that country looks like 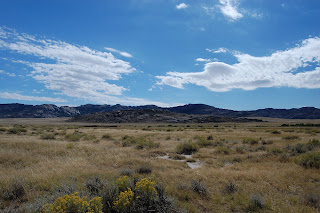 Independence Rock was named so because it was said that if you made it here by the 4th of July you were almost guaranteed to make it thru the Mountains to the west before the fall snows would set in.  Like other places along the trail, thousands of settlers etched their names in the stone as a permanent record of their passage. 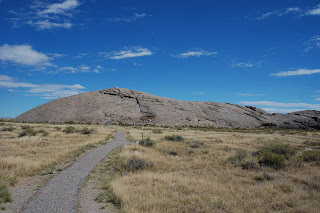 About 150 miles back - by Gurnsey - there was a place called register cliff which I forgot to tell you about.  It was also a place where settlers left their mark.  Even more so than independence rock - their names have been preserved.  There are literally thousands inscribed in the stone...   Here is a shot of just one of those names on Register Cliff. 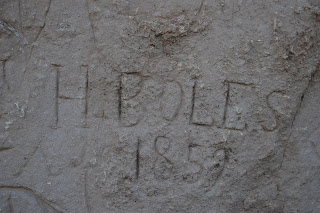