It's hard to believe that it's been 5 months since our last post...
5 Months!
If you think time has been passing by fast...  just wait till tomorrow.
It only gets faster.
Anyway - we are getting ready for some travel so I wanted to bring things up to date, so
yesterday in preparation, I looked at the blog to see where I left off
and was rather surprised how I left things.
We were in Alabama just finishing up with our windshield replacement, and then were planning
to run back to Tucson and try to get my knee repaired.
Then we disappeared for 5 months...  WTF?
Sort of like the cliff hanger of a Jersey Housewife season finale.  🤮
Sorry!
So....   Lets bring things up to date shall we?
We finished up our windshield replacement in Red Bay, Alabama and were back on the road headed
west by about 11am.    We decided that this was no longer a pleasure trip and might as
well get back to Tucson as soon as possible to try and get my surgery lined up.
Our map below shows the trip.
We made one stop at the Lake Eufaula KOA in eastern Oklahoma.
We arrived just prior to sunset.
We had planned on just staying at a Walmart, but the temps were in the low 90's and
that would have meant the generator to run the AC which I don't like to
do at Walmart type overnights, so we opted for a KOA with a hookup instead.
The next morning we left Lake Eufaula around 0700 and were rolling up in front of
the house that night around midnight.
We covered the 1,600 miles in about 35 hours.
We had lots of pretty spring wildflowers to cheer us up as we motored west. 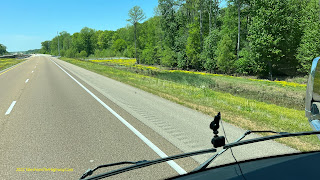 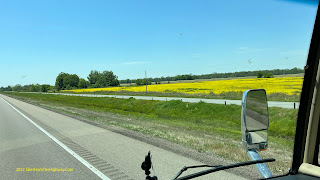 Who says you can't teach an old dog new tricks?
The "old dog" being me of course.
Normally we have plenty of time and are not in a rush.
This trip being different we tried something new with the dogs.
Taking advantage of their habits - I know that soon after they eat dinner, they like to go and
answer natures call.
Not wanting to waste a lot of time stopping to feed and walk them I thought why not try
to see if they will eat dinner while underway.
So...   about 10 miles prior to the next rest area, Kate put their food down... 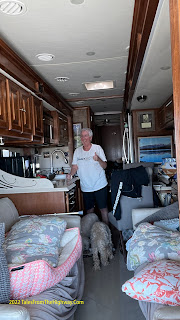 No worries about the underway appetites...  they dug right in!
About the time the flight crew was finishing up with the desert and coffee service,
I was final approach for the rest area.
Kate took them out for a quick walk and in seconds...
plop plop fizz fizz - back on the road we is. 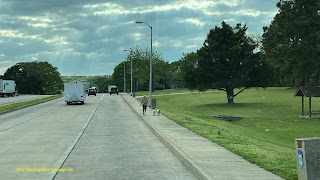 Fuel was running in the mid $5 range.
Thankfully my Open Roads Fleet card saves me quite a bit at each fill up.
I saved over $250 just on the round trip to RB. 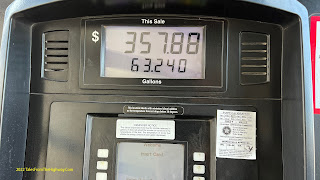 Coming down the big hill into Las Cruces, NM just as the sun sets.
We stopped for one last fuel at the TA on Motel Blvd, and then headed out on the last 4hr leg
to Tucson. 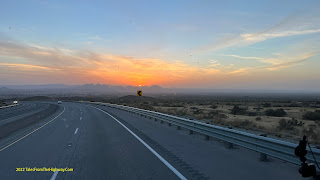 Arriving in Tucson, I set out trying to arrange for my knee repairs.
Unfortunately, since it was operated on in March, I had to wait 12 weeks before they could
operate again (infection worries).    So the knee replacement was scheduled for June 21.
So for those weeks waiting, my knee was somewhat locked in a partially bent position from which
I was unable to straighten it fully.
This allowed the muscles to tighten and contract and now I'm paying the price getting
them stretched back out again.
In case you were wondering or contemplating...
This is what the cut looks like.
The right knee was held closed by staples,
but this Doctor used a mesh with superglue on the left side instead.
It was a much easier removal and felt more secure with less pressure points.
I actually tore the right incision open a bit when I was exercising once.   Not this side.
Having just had my right knee replaced last July 1, I knew what to expect this time around
and happily this one turned out to be much easier that the right was.
I've been having some trouble with my extension (getting it straight) but that is coming
along and other than that - it actually feels better than the one done over a year ago.
While I was in surgery, Kate had some time to kill, so she decided to drive home and
re-arrange the living room.    She moved the couches 90°
I came home a bit hazy from the anesthesia and wondered what happened. 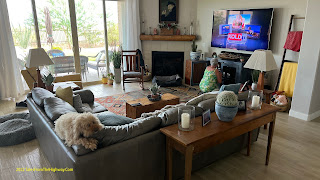 So, its been another summer in Tucson.
Not what we expected.
The days pass by with the rhythms of life.
The dogs constantly reminding us when its time for... (fill in the blank) 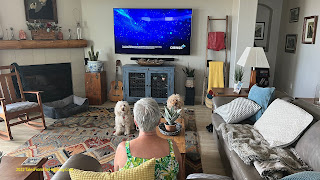 I've been busy with my Physical Therapy program.
Day in and out the PT creates it's own schedule that is sometimes matched by the coming
and goings of the afternoon monsoon thunderstorms. 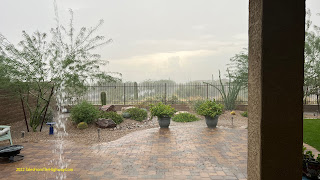 And the season of clouds and storms do make for many interesting sunsets. 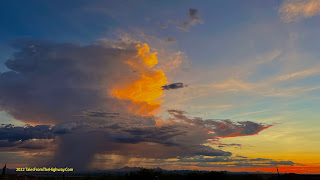 Almost every night this time of year is a great sunset. 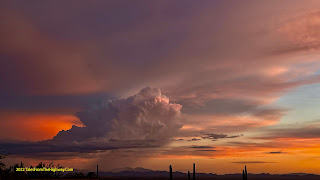 I had to lay off working on the ship for a bit as it was not comfortable sitting for long at a desk,
but I've been able to pick at it a bit and do some clean up
Its been over a year and I'm currently about 95% done. 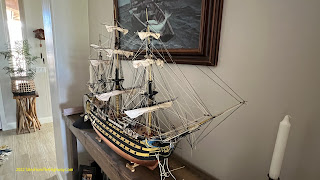 I still have to put on all of the gun port hatches,
run a few more lines, attach anchors, and odds and ends touch-up,
but its getting close. 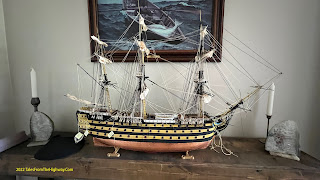 An earlier photo with a penny near a shroud to give you some perspective as
to the size of the details. 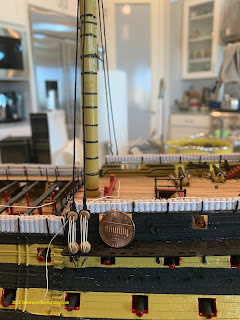 So...  that leads us up to the present.
I had mentioned in our last post that we were holding on to our return crossing on the Queen Mary2.
We did keep that booking and so are going to fly over to London, spend a few nights,
then meet the ship in Southampton and take it back to NYC
Young friends of ours will fly into Tucson and stay here with the dogs while we go roam about.
The key word for this short 2-week trip will be:
Luxury.
We'll fly to SFO on Tues Oct 11 and spend the night at the Grand Hyatt right at the Airport.
The room I booked is a corner executive suite with floor to ceiling windows.
It includes a telescope and binoculars so that you can enjoy some aircraft spotting while staying there. 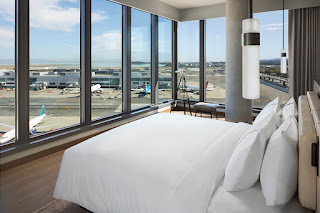 Plus a separate living room with fridge, coffee, tea etc. 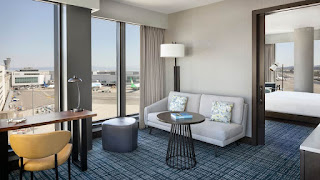 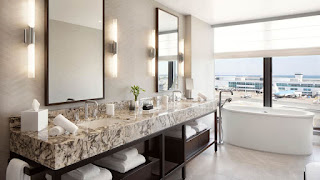 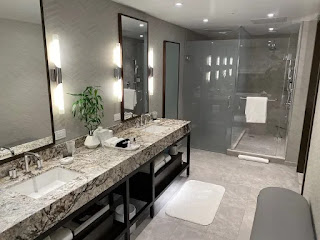 Weds Oct 12 we'll get on United 901 from SFO to LHR
We are flying their "Polaris Class" which is basically their 1st class long-haul service.
Separate suites with lie flat seat etc. 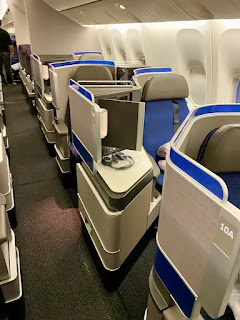 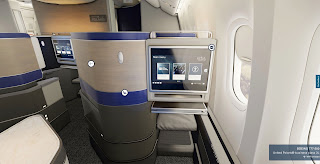 We'll arrive in London on Thursday morning Oct13 and stay at the Londoner Hotel
on Leicester Square for 5 nights.
Tuesday Oct 18 we'll get on the QM2 in Southampton as planned (minus dogs) and
enjoy 7 days in our first class cabin (with butler)
Tuesday Oct 25 we will arrive in NY and I have flights booked to take
us back to Tucson that evening.
While in London we'll be able to visit a few of the sites (such as Windsor Castle) together rather
then separately as we had planned.   Normally places like that do not allow dogs, so we would
take turns going thru while one of us hangs outside.
Since we wont have the pups this trip...  time to play while the Doodles are away!
Well, it only took 5 months, but that brings you up to date.
Next stop London!
Posted by GregK at 12:58 PM