It's hard to believe but it has been 2 months since our last post.
A lot of water has gone under the bridge since then....   a lot.
So let's bring you up to date.
We departed Quartzsite on Feb 8.
Ron, Maxine, Rob, & Pat all headed to Catalina State Park near Tucson,
and we headed back south to Senator Wash BLM Land north of Yuma.
Our plan was to get back together with R&P in 2 weeks at Organ Pipe Cactus NP, and then
all of us get back together a week after that up at Lake Roosevelt.
After 17 days of boondocking, our first stop at Senator Wash was the water fill and dump stations.
We scouted around looking for a good spot to park.   This time of year it can be
challenging to find a decent spot but we arrived early and while not the best, we found
a large spot that took advantage of the prevailing winds to keep the dust down.
We spent 2 weeks here going to hikes and pursuing other projects
Mid point of our stay, a cold front came thru with high winds and dust storms. 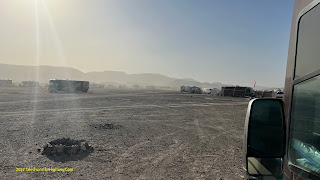 The next morning however dawned clear and cool with a setting moon. 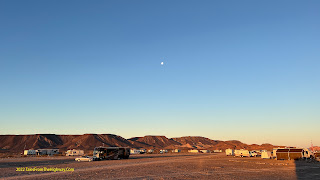 A couple of days prior to departure my left knee started to bother me.
I had been feeling something for a while but nothing major.
All of a sudden it was becoming harder to hike so I took a few days to rest it.
Departure day - we headed south east thru Dome Valley enroute to I-8 east of Yuma.
We've never taken this route and it was a nice and quiet green ride thru the farm fields.
Upon arrival at Organ Pipe Cactus National Park, I could hardly stand on my left knee.
Something was definitely wrong.
I'd had my right knee replaced in July so that I would have plenty of time prior to our
departure for England to get it back into shape.
All of a sudden, this wrench in the works, only 2 months before departure was starting to
get me worried.   I ordered a cane from Amazon and received that a day later, but even with
that, moving about was extremely difficult.
We had planned on a week at OP but after some frantic calls to doctors in Tucson,
I secured an appointment in a few days so we had to pack up early and hit the road.
Long story short...
A couple of doctor visits, an MRI, and just a week ago a quick Arthroscopy on my left knee
and Voila...   my knee is feeling great!   Not 100% mind you, but I'm able to get around without
any assistance and almost pain free.
So now the next few weeks will be filled with 3x per week visits to Therapy, lots of home
therapy, and steady progress.
Barring another shoe dropping, we are back on track and scheduled to hit the road on
April 25 and meeting up with the Queen Mary2 on May 15.
It should be an interesting trip.   I have a lot of great stuff planned including
renting a Motorhome in Scotland for 10 days.
Gracie, due to her age and poor hips however will not be able to do much walking around.
We dont want to leave the dogs alone in rental homes, so against all of my objections,
I've broken down and gotten a doggie stroller so that we'll be able to head out and bring her along.
Oh the Humanity!
Fingers crossed - our next report will be from the road headed to NYC
Posted by GregK at 10:21 AM