This was especially intersting as it was some new territory for Kate and I.
Our first visit here, we stayed in the centrally located (and aptly named) Furnace Creek Campground.
Our site had full hookup with 50 amp servicee.
We only used the electric hookup to run the AC.   The temps this time of year were
moderate - 80-90 during the day and cool at night.
Our first days adventures took us from the campground south thru badwater basin down to the
salt flats.   In the basin you are at 282' below sea level - the lowest point in North America.
After the basin, we headed back north and drove the Artists drive, and then around
the other side of the Black Mountains and up to Dantes Lookout which is almost 5,500' above sea level
so looking down in to the basin we are almost 6,000' feet up.
On the salt flats in Badwater Basin 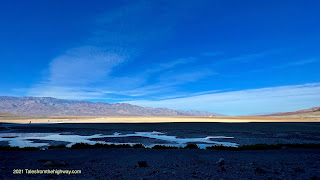 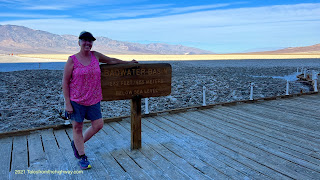 The salt looks like snow at times.
At other times it looks brown. 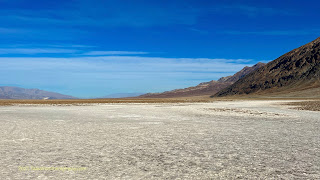 On the way to the Artist drive, we stopped at The Devils Golf Course.
A section of the basin where the salt grows into crystalized mounds.
As the mounds heat and cool, they make a strange almost metallic popping sound
as they expand and contract.
If you listen to the video below you can hear the popping sounds. 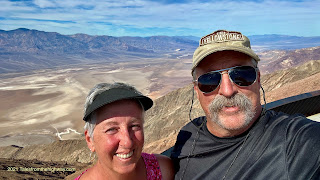 On day 2 we headed over to the ghost town of Rhyolite,
Then took a 25 mile dirt road over the the mountains and thru a canyon,
Then visited a moon crater.
Born in 1904 in a gold rush, Rhyolite grew at breakneck speed and in just a few years
over 8,000 people lived here.   There was a train depot, banks, schools, running water and
electricity, and all the modern conveniences.
In 1910 the market collapsed and by 1916 the electric and water was turned off, the town
was deserted, and the buildings picked clean or relocated.
In just a dozen years the town was born, grew, exploded, and died.
Below - the Tom Kelly bottle house.
Built from over 50,000 beer bottles. 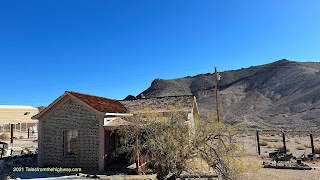 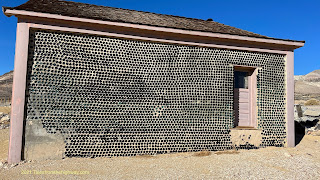 The skeleton of the school house 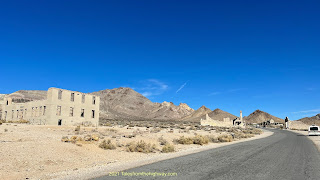 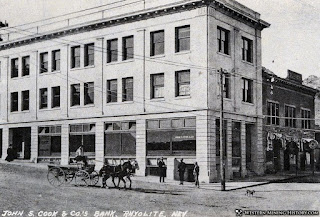 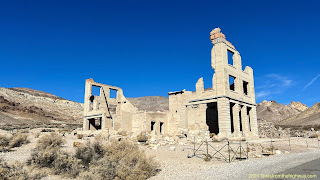 The town in 1908.
You can see the bank and school in the center background. 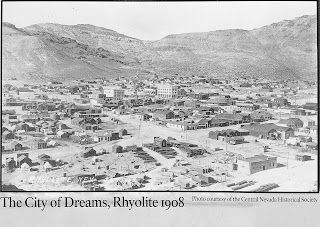 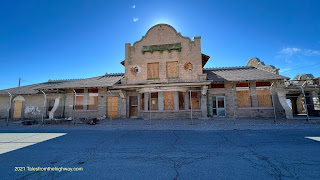 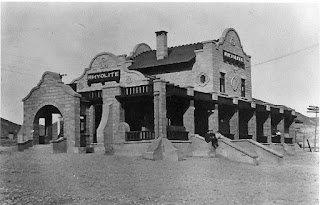 It was one of the finest train depots in the state at the time.
By 1916 the town had been picked clean and moved elsewhere. 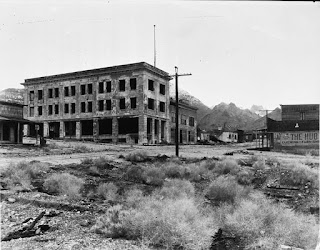 The boom and bust cycle in the old west was common, but nowhere was it so abrupt
and dramatic as in Rhyolite.
After our visit to Rhyolite I took the long way home on the Titus Canyon Road.
The road is a dirt back country road that is one-day due to the narrow lanes and
dangerous mountain switchbacks where passing would be extremely dangerous and
impossible at many places.
The colors in the rock are varied and amazing. 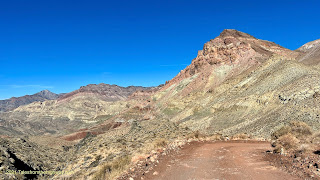 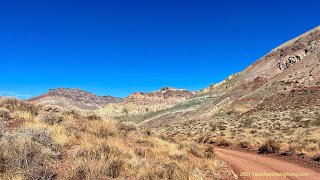 About 20 miles into the ride, after crossing over the pass, you come to Titus Canyon.
The canyon at points is so narrow that it is barely wider than my truck.
Its important to check the weather ahead of time to make sure no rain (flash flooding) is
is in the forecast. 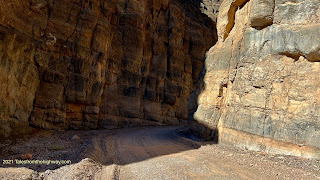 Some interesting patterns in the rock 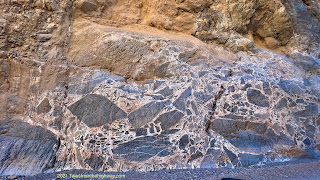 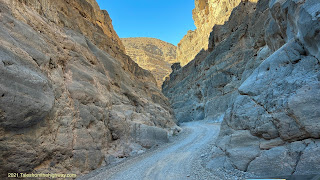 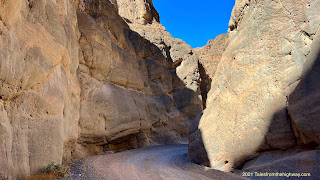 After about 5 miles the sky brightens an you can see Death Valley starting to open up
in front (and below) you. 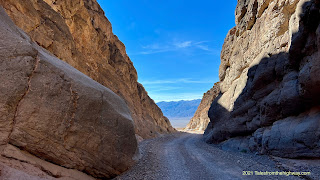 A short video of driving thru the canyon.
After the canyon, we came out onto the North Road.
We headed about 40 miles north to Ubehebe Crater.
The crater is about 1/2 mile across and 600' deep.
It was formed about 2,000 years ago when molten magma pushed towards the surface
and ran into an underground aquifer.   The magma caused the water to flash to steam
and cause a massive explosion that hurled all the material from the crater into the air
landing in the 6 square miles around the crater. 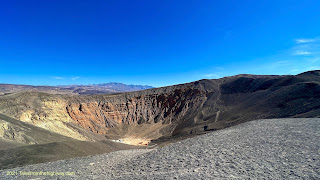 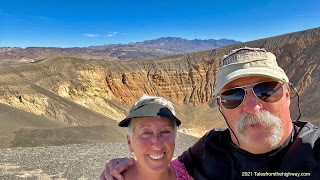 Our last full day we decided to head over to the eastern side of the park, and actually leave the
park to visit an area which I have been interested in for many years.
Lying at the foot of the Sierra Nevada Mountains, the Alabama Hills are an area of
interesting rock formations.   They, and the mountain backdrop, has been the scene of countless
movies.
A list of them can be found here
To get to the Alabama Hills, you must leave Death Valley,
Climb over the Paramint Mountains at 5,000'
Descend into Paramint Valley at 1,600'
Then climb over the next mountain range (name escapes me) another 5,000' pass
and down the other side.
On the way down the last mountain range the Sierra's come into view. 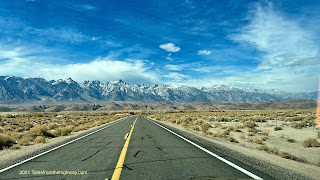 If you look at the picture below, you will see a road just to the left of the telephone pole,
zig zagging its way up the mountain.
That is Whitney Portal Road.
It takes you up to the Mount Whitney Trailhead and is also
where the Mountain Road scene was filmed in "The Long Long Trailer" 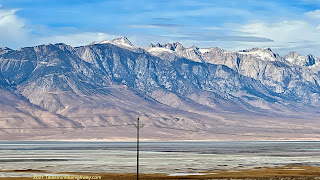 We visited Tuttle Creek BLM Campground.
Looks like what I expected.   Great views and very uncrowded.
Near the campground is the Alabama Hills, Movie Road area.
It is where most of the films were shot.
It was a big boondocking area but it seems as more and more use it - the less
areas are remaining left open for camping. 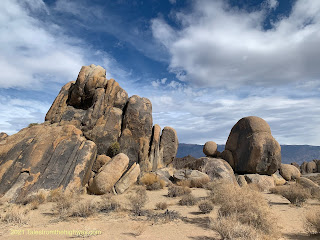 you can see the person below has a nice site among the rocks. 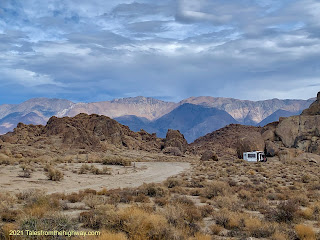 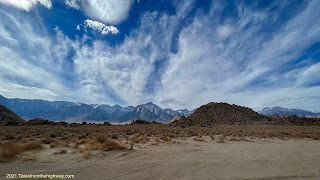 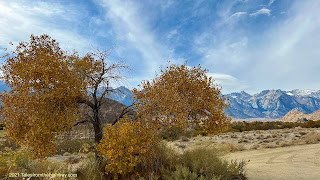 Soon it was back to Furnace Creek.
Over and down, over and down the mountains and
90 min later we were back at the bus for our last night. 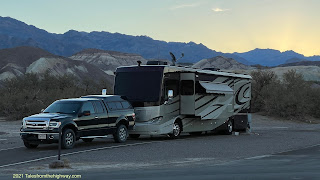 Finally our last sunrise in the campground.

Today we headed 100 miles east and are now living the large life in the lap of luxury.
One of our favorite places - The Las Vegas Motorcoach Resort will be our
home for the next 8 nights.
While here I'm going to install a 40" Samsung Smart TV over the cockpit
to replace the older 32"  "dumb" TV
All of this will be the subject of our next post, but for now
the Tiki Bar is lit up and its "Tiki Time!"

See ya down the road!