Cool days and cooler nights!
Fall in Colorado is a special time!
After leaving the J Robb State Park in Western Colorado,
we've just completed our 6 night stay at the Redstone NF Campground on the
Crystal River south of Carbondale.
Redstone has 3 loops.   2 with electric sites, and one (where we were) with no hookups.
We also were in an area with no internet or cell service so we have not been able to reply to all of you who left us messages on our last post.    We do want to say its nice to hear from you all and are glad that you are enjoying the ride along with us.
I've included a trip map below that will relate to the places we visited since our last post. 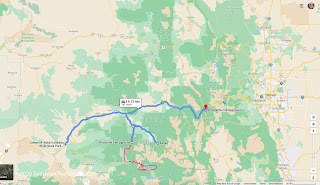 The red line above shows our Kebler Pass/Crested Butte excursions.

Arriving at Redstone, the fall colors were starting to grow in earnest and the yellow
of the Aspens blended nicely with the red cliffs which surrounded our new home. 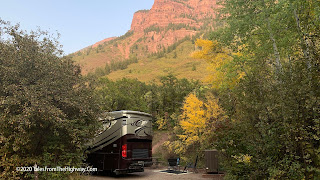 Our stay was planned so that we could meet up with my good friend Frank from Denver.
Frank and I go back about 40 years to our days welding for Public Service Elec & Gas Co
of NJ in a Generating Station.
Frank is a special friend.  One of kind.
All my bumps and bruises over the years - it was always Frank looking down at me
when I woke up in the hospital - a smile on his face while shaking his head and
asking "what did you do to yourself this time?"
The one constant with Frank is his never ending smile.

We took a day trip with Frank up onto Kebler Pass.

The 30 mile dirt road is also known as Gunnison County Route 12.    It runs between  Colorado Route 133 and Crested Butte, crossing Kebler Pass a shade over 10,000'

A scenic ride for sure with more changing Aspen.

We found a nice potential boondocking spot along a stream and decided to have a picnic
there before heading back to camp.
Just a few miles from Lost Lake - we took the forest road up for a visit.
Frank was visiting us for 3 of our 6 night stay - and in no time at all, the 3 days had passed and
we said goodbye.
Kate and I went back to the Kebler Pass Road as there were a number of potential boondocking locations that I had scouted out before we left Az, and I wanted to check them out in person.
Besides - the leaves were continuing to change and the views were the best!
A boondocking spot with great views about midway across the pass 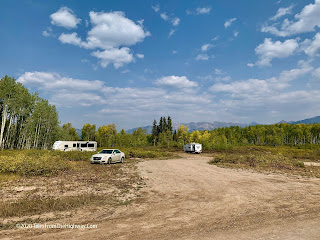 Starting down the east side of the pass towards Crested Butte. 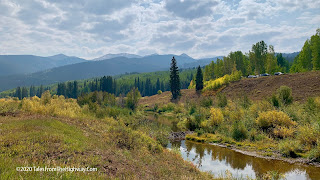 We took another side trip up to Irwin Lake about 2 miles north of Rd 12
Finally down into Crested Butte - we decided to leave our explorations of town for later when we'll be back in the vicinity as there were a few more boondocking spots that I wanted to check out.

A word about the Apens...

Aspens start from a single seedling and then shoot out rhizomes underground
from which new trees grow up out of the ground.
You will normally see Aspen growing in a grove and often the trees in that grove are really one single
living organism.
Aspen turn yellow in fall, but some turn gold and some orange.
All of the trees in the single root system will all be the same color as they share the same DNA
The individual trees can live up to about 150 years, but the root systems live much longer and
a stand of Aspen in Utah is growing from an underground root system estimated to be
80,000 years old.
The largest living organism on earth is  that same stand of Aspen and another one in contention
for that crown is right along the Kebler Pass Rd.
Spending time in an Aspen Grove on a clear blue sky Colorado day is a special treat.
The gentle breeze shakes and shimmers the sunlit golden dollar like leaves.
In my next post I hope to post a good video of this if I can get the right shot.
Meanwhile - back to this post - we were in Crested Butte and headed out
to Washington Gulch for some boondocking site reconnaissance.
Taking Co Rd 811 out of CB it quickly turns to well graded dirt and only about 5 miles further you come to several areas suitable for dry camping.
Good Cell Service and Great Views!
I had hoped that not many people knew about it but this is not the Colorado of my youth.
Way more people live in the state these days. 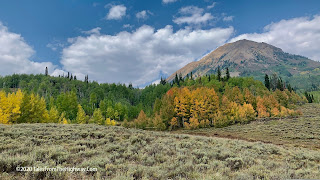 There were perhaps 20 or 30 rigs scattered about the area. 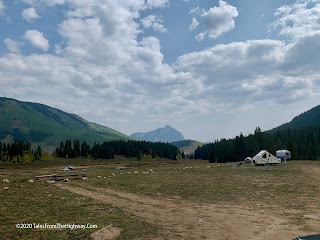 Views in every direction. 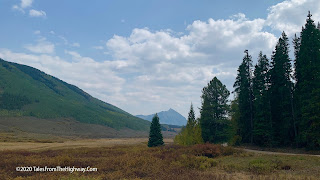 We eventually made a U-turn and headed back 2 hrs to our camp.
We had hungry Doodles at home and we better not be late!
Some fall color just before we met back with Colorado 133 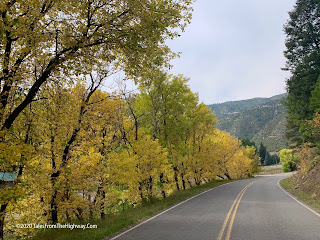 Another side trip was to Aspen Colorado.
I've been many times but wanted to show Kate.
What amazed me when we passed by the Municipal Airport was the sheer number of private jets on the airport tarmac.    I estimated it to be well over 100! 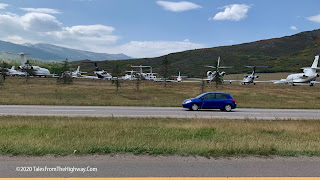 For about 3/4 of a mile as we passed the airport, rows upon rows of large private jets! 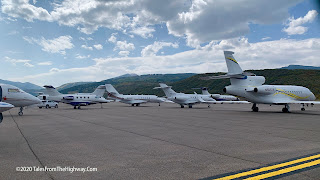 Being a pilot - we had to stop so I could take a better look and the air hung heavy with the sweet smell of Jet-A exhaust.
There was even a line of planes waiting to take off.
When I lived in Colorado - I was a partner in a Piper Turbo Arrow (N8232L) which I used to fly up
to Aspen on a regular basis.
Often, some bigwig would have arrived prior to me and had laid out a catered spread for his arriving guests at the General Aviation Terminal.
Once they were gone - the massive spread of leftovers were fair game - and I would fly up,  get a great meal for free, then fly home.
Aspen Airport is a fun - if challenging airport to fly into.
Surrounded on 3 sides by 14,000' peaks - it lies in a dead end valley.
You must land in one direction on the single runway, and then take off in the opposite direction as the mountains at the end of the runway are too high to clear.
Coming in from the east I would clear the 14,000' ridge by about 1,500' and then extend landing gear and full flaps while pointing the nose steeply down towards the earth in order to descend into the valley near the airport.
It was fun.
Aspen was crowed on Saturday and since we did not want to mask up to walk the crowded streets,
I gave Kate a driving tour instead.
Downtown along the slopes 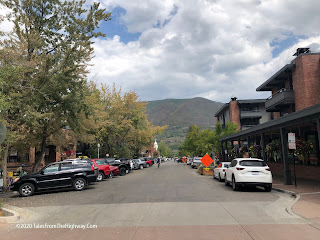 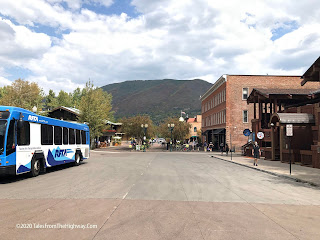 One of the many ski hills rising up from downtown. 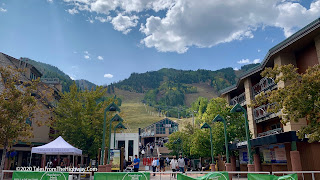 Your typical "Deli"   Sandwiches and Caviar. 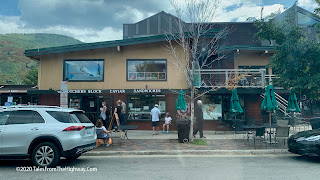 A nice park along Main St. 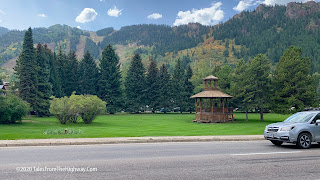 We curved off Main St into some of the residential areas.
Here are some of the homes of the "lesser billionaires"
I'm sure the ones with the Private Jets at the airport are living in gated and guarded communities where the likes of me wouldn't even know existed. 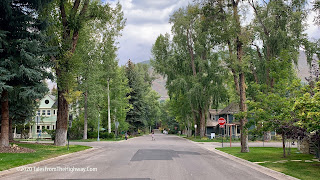 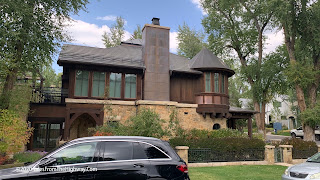 Sunday we hung close to home and I watched my Broncos get spanked by Pittsburgh and drop to 0-2
What has happened to my Denver Broncos?
The view out the front of the bus has grown decidedly more Fall-like over the past 6 days. 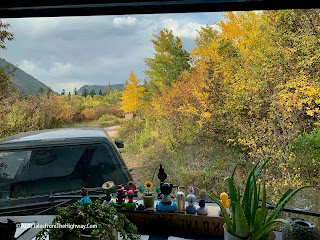 A view of our campsite from the hill behind. 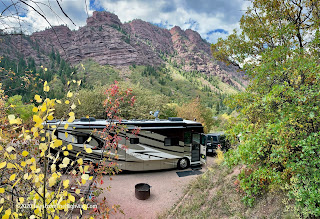 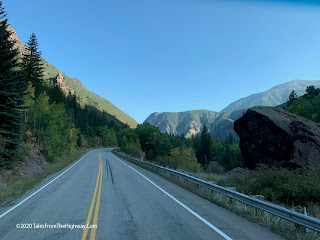 I-70 is an engineering marvel as it passes thru Glenwood Canyon.
It is also normally a beautiful drive thru the canyon.
The problem this trip is that a wildfire was burning here just a couple of weeks ago and the highway had been closed for several weeks.
The rain and snow a week ago finally put it out just in time for our visit.
Now open - it is down to 1 lane each direction while they work on assessing the fire damage to the upper roadway. 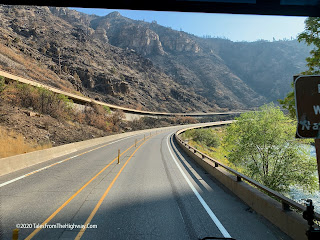 Below the fire actually jumped the interstate - and the Colorado River - to the opposite shore. 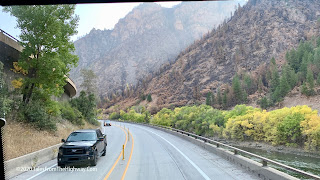 Further east - out of the burn zone - we go back to a regular 4 lane interstate.
You can see the westbound lanes above us.
The canyon returns to a more normal unburned look. 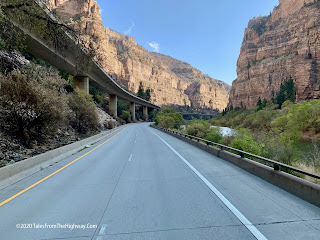 About 45 miles after leaving Glenwood Canyon, we pass thru Vail and
then begin the climb to just under 11,000' on Vail Pass.
The colors of the low ground cover in the high country was quite beautiful. 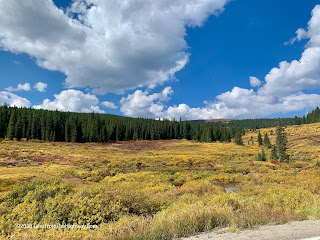 Heading down the east side Vail Pass we pass Copper Mountain Ski Area, then enter the basin
between Vail Pass and the Eisenhower Tunnel on the Continental Divide. 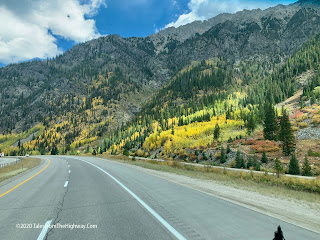 Our destination for 3 nights is the Prospector NF Campground above Lake Dillon.
Nestled between Vail Pass and the Continental Divide our camp sits at 9,100'
From here we plan to make a day run into Denver tomorrow,
(about 90 min each way) to grab some fine bottles of wine out of my wine storage locker.
These are my old stomping (and skiing) grounds, so we'll also
tour some of the local sites such as Breckenridge and Loveland Pass before moving on.
The view from near our Campground of Lake Dillon 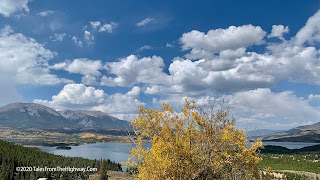 After our 3 days here - we'll be heading west and south to another NF Campground for 6 nights
(exact location to be decided) somewhere in the Gunnison/Taylor River area.
We'll cover our stay here and travels down the road next time....
Bye for now.
Posted by GregK at 5:40 PM