Welcome to my new blog layout.
Now that I'm retired and have some extra time on my hands I'm playing around with
things a bit.   The changes are a work in progress.

I've tried to make it easier to read.
Any comments? - let me hear them.

It will bring up a map were you can see where we are and you can also select
date ranges to see where we've been.

Now that that is out of the way.

The waterfront park is a big long gravel parking lot on the waterfront.
It is about a mile long and has grassy areas and gravel areas.
There are places for tents and RV's and a town park.

There is a walking path along the whole front of the Park that runs about 1.5 miles from
the Ship docks at the north end of the bay, past the RV Parking area, & town park
all the way south to the Marine Center and the downtown area of Seward.

We are parked at the far south end of the area, just a few spots from the south end
where the town park area begins

View below is the south end of the RV area looking north.
We are about 4 up on the left. 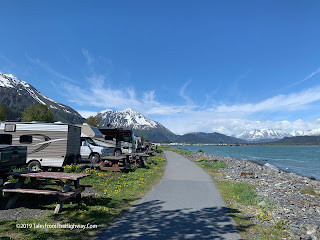 Below - taken from the same spot - looking south towards the park,
and further beyond (about 1/2 mile) would be the downtown area. 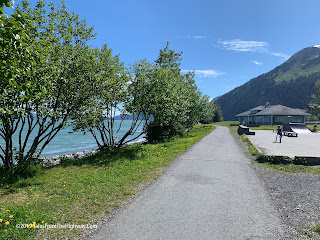 The Waterfront park has some water & elec sites but most are dry camping.
We, of course, are in the dry camping area.

So.. While settled in I take care of some chores such as cleaning off the solar panels.

On those rare days when I have to run the generator to top up the batteries...
(only 1 day in 21)
I take advantage of the extra power to roast some coffee.

I have about 40 lbs of Green beans, several varieties,
that I measure into 1 lb baggies as needed

Our front window is a tourist attraction.
Many people who walk by each day stop to admire the plants and
solar animated characters. 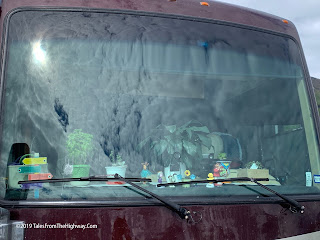 People are constantly stopping to take pictures of themselves by the bus.
They don't have vehicles like this overseas so its unusual to them.
There are also only a few party busses here.  Most must be in an RV Park somewhere.
That only adds to the attraction.

Sometimes we feel like the animal in the zoo getting our picture taken.

June is the Halibut Fishing Derby.

Below is looking at the bus from the beach.
Behind us is Mt Marathon.
Towering about 2,800' over us - on July 4th each year there is a marathon race
from town, up and back down.   Its a grueling race and the winning times are about
40 minutes for the mens race.

You can see the tracks going up the mountain.
One more visible on the right side of the ridge and one on the left.
One is for uphill - the other for downhill.

I have not yet really captured the great shots, but its still been interesting
watching the sea life so I thought I'd share a bit of what we have so far this year.

Each day we walk the waterfront with the dogs.

A Bald Eagle has taken up residence in the vicinity and it keeps making an
appearance now and then.

The other day an angry Raven was trying to chase it away. 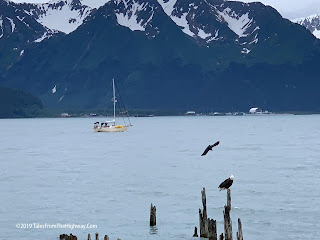 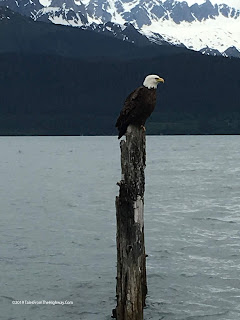 When the Raven left - the Eagle continued is patrol. 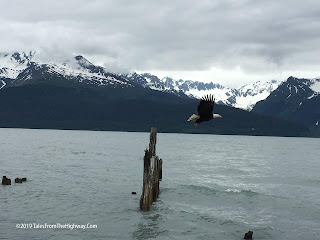 Sea Otters are always all over the bay.
Here a pair was enjoying a clam dinner. 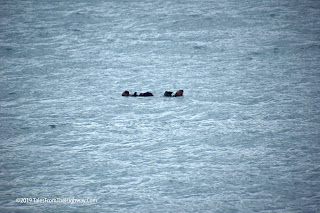 Another pair was playing 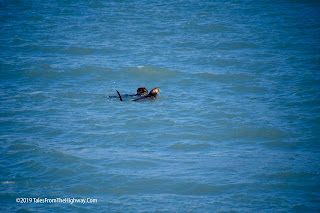 This is our 4th time here.
We've never before have seen Stellar Sea Lions up in the bay.
There is a big colony a few miles down on the far side of the bay,
perhaps they are roaming further in search of food.

I have seen a few come up with a large fish in their mouth. 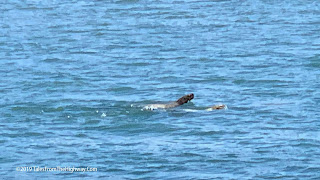 A small group (raft) of about 6 have been around. 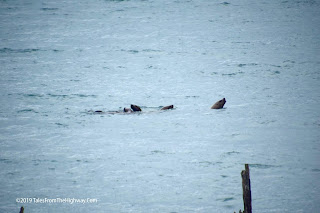 Another amazing sight we've never seen this far up the bay...
A mother Humpback Whale and its baby. 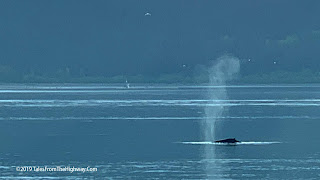 Below - in the distance you can see both mother and baby.

If you dont like the view just wait - it will change.
Below is the same view as above. 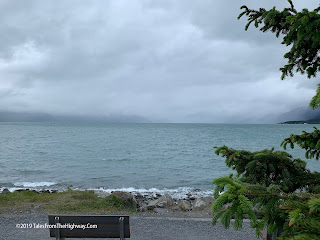 After all this walking and wildlife viewing....
It's time for a nap.

One of the cool things about Seward is the port.
Seward is a stop on the Alaska Cruise Ship Circuit.
Many ships use Seward at the end of the line.

One route is from Vancouver - up the coast ending at Seward - where they discharge
the 7-day passengers, take on a new load for the opposite trip south to Vancouver.

Some make the 14-day round trip.

Resurrection bay is a dead end.
The ships enter from the south, dock at the north end, and then depart to the south.

This means that every ship must execute a 180 degree about face.
Either before - or after - they dock

In either case - the ships make that 180 degree spin right in front of our RV.
It makes for a fun show.

Below there are 2 ships at the dock.
One facing each way. 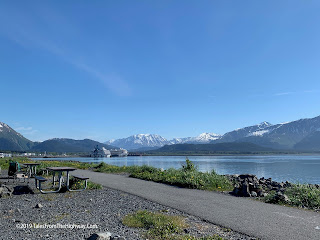 Radiance of the Sea arrived this morning at 0445
She pulled straight in - so will be rotating tonight. 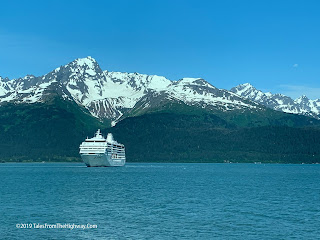 The Holland America Ships seem to like to back in first.
Here the MS Noordam is making its 180 directly in front of the RV
at 0445.  (yes I was up to watch it) 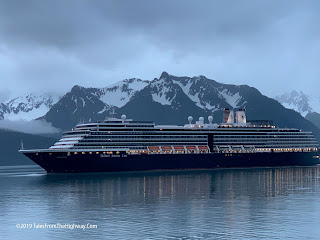 The MS Westerdam departs.
Like the other Holland America ships - she pirouetted in the morning so
upon departure she sails straight out and down the bay. 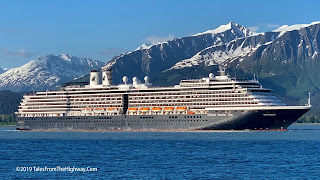 Passing right in front of our window.
A perfect viewing stand in all weather! 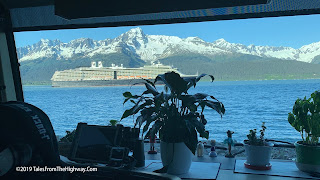 The variety of ships is fun to observe

Every ship that arrives or leaves the Port of Seward is required to have a Harbor Pilot on Board.
The pilot is an experienced captain who is intimately famaliar with the harbor, the bay,
and its currents.

They take command of the ship about 4 miles or so south of here near where the bay forks.

In the morning, the Tugboat "Junior" runs out to meet the incoming ship.
The Harbor pilot climbs aboard the ship, and takes command all the way to the dock.

In the evening, Junior first maneuvers to the pilings where a mate scrambles up a ladder
onto the pilings to release the outer lines securing the ship.

While the ship slowly leaves the dock with the Harbor Pilot in command,  Junior is
rushing back out to the rendezvous point.

The ship might - or might not - need to make it's 180° turn.
In either event - once at the head of the bay, Junior and the departing
ship will rendezvous and the Pilot will climb down from the ship onto Junior,
and Junior will make the long run back to the port.

Just about every day this routine plays out in the morning and the evening.
And we have a front row seat. 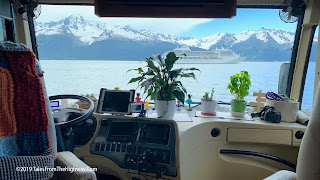 Just a little taste of what life is like from where we sit.