Actually - we've been back about 12 days now but it's been a bit of a rat-race.

We arrived in NY, fired up the bus and headed off down the road.
Stops at Freightliner in Gaffney, SC followed by
another stop in Red Bay, Alabama completed the maintenance I wanted to have
done to the coach, and then we were westbound, hurtling towards Arizona.

Below is a map of the last 3 weeks of our travels. 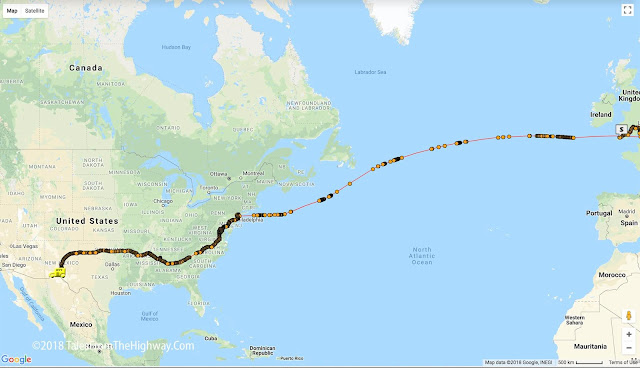 We are currently spending the night in Las Cruces, NM and will be back in
Catalina State State Park near Tucson. tomorrow.
We've got reservations there for 2 weeks.

We closed on our new house on Halloween so Tuesday we'll pick up our keys,
Weds, do a walk thru and intro to all the systems  (its a "smart house" with a lot of electronics)
and then we'll be busy getting stuff delivered and setting up our temporary desert nest.

More on all of this later...

First lets get caught up on our departure from England and arrival back in the States.

We left you last at Thornbury Castle in England.
After two quick days - it was again time to pack up and head down the road
as we had a date with a big ship headed to the new world.

Our last night in England was to be spent at the Holiday Inn in Southampton near the docks.
On the way to Southampton, we stopped again in Castle Combe as it was on the way and I wanted
to show it to our Swiss Friends.

Finally we arrived at our last night in the UK.
We had drinks in the bar and true to form - Dog Friendly as is most of the UK. 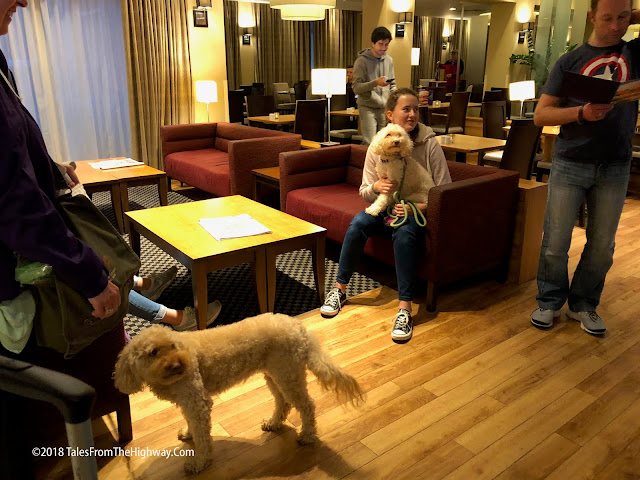 After turning in the rental car - all that was left was saying goodbye and boarding the Queen Mary2
for our return voyage to the US.

It's always sad to say goodbye - but as Marcel says "the end is just the beginning of the next"
Till next time my friends....  More adventures await us down the road.

Having the dogs pushes us to the head of the line everywhere we go.
Boarding the ship, leaving the ship and clearing customs...
Each time we show up with the dogs they move us along.

After dropping the dogs off at the kennel, it was back to the room to unpack and store luggage.

We had a welcome bottle of Prosecco, a Sauvignon Blanc, and some Godiva Strawberries.

Back up the the kennels to greet old friends and new 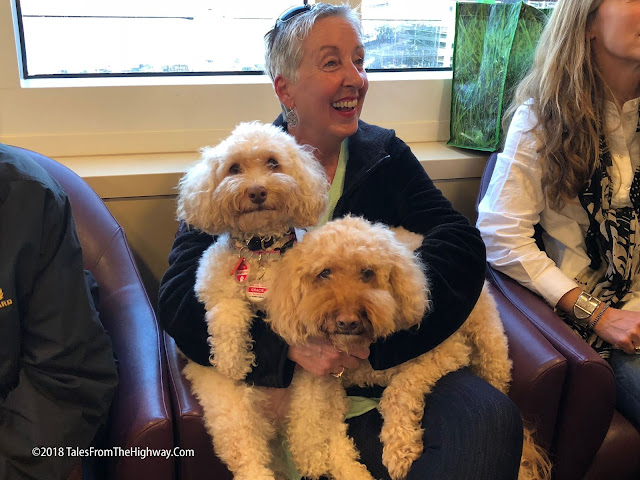 Around 5pm we pushed off from the dock.
Below the photo shows the wake kicked up the exact second the engines were put into forward
for our transatlantic crossing.

Oliver - the Kennel master is a true gem.
Personable, knowledgable, and one who truly loves his job and the animals in his care.
Below he temps Gracie & Lucy with the evening cuisine.

This crossing seemed to be much less stressful on all of the dogs.
I wonder if the fact that many of them knew each other from the Eastbound in May helped.

Kate & Craig surprised us with an afternoon tea!

Big and small - we had 13+ dogs in this small room and they all got along just fine. 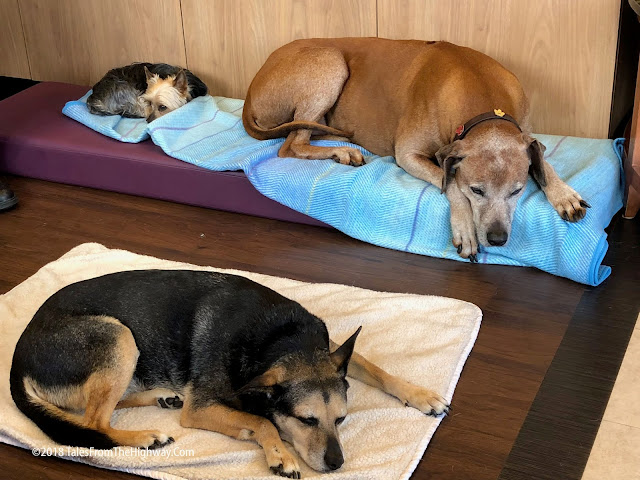 Since we knew many of our Kennel Mates from our eastbound crossing - this westbound turned into
a party cruise of sorts. 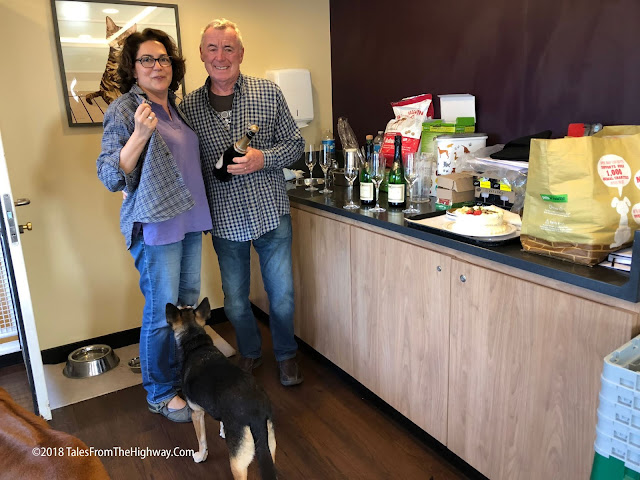 The troublemakers all posed during the "dog photoshoot".
Does it look like we are having fun? 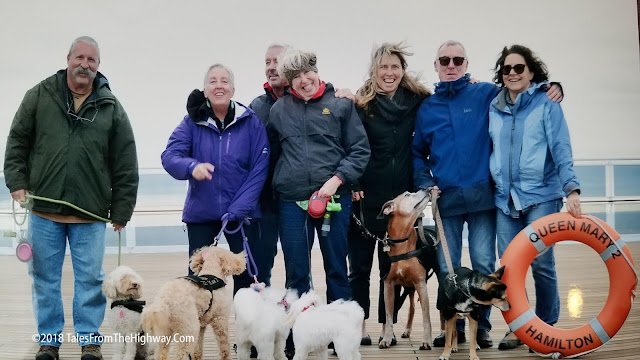 I can't say enough about the group in the photo above.   What a great group of people!
Without sounding overly melodramatic - they are friends who I think
we'll be seeing alot more of as time goes on....
Both on this side - and the other side of the pond.

It was not all fun and games for the dogs however...
At times they had to go back into their little prisons and get some sleep.

Kate & Ken enjoy a cocktail at the Commodore Club -
a beautiful bar on the 10th deck overlooking the bow.

Ken is a man who wrote the book on style...
Check out his shoes and socks! 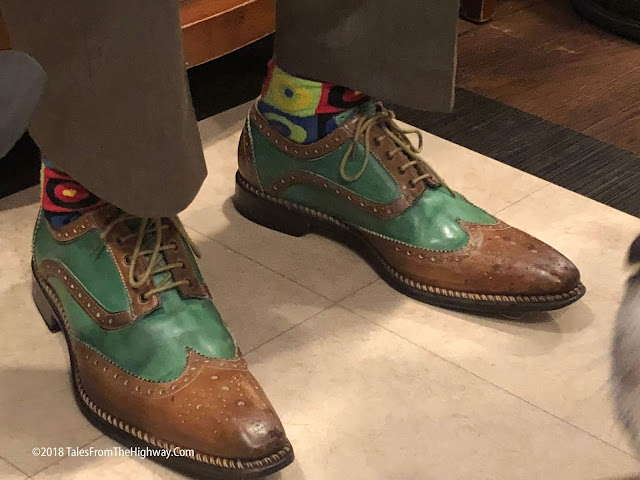 Each day around noon we headed to the aqua therapy pools and steam rooms prior to some time
in the relaxation room.

No Ocean Crossing is complete without sunrises, sunsets, rainbows, storms, and moonlit nights.

Moonrise in the east as we steam west.

A moonlit sky from our balcony 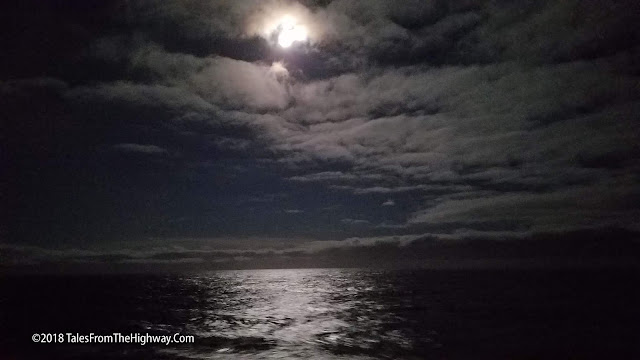 Midway across the Atlantic we had a run in with some weather.
Nothing major for the North Atlantic but it still made for some nice variety in the trip.

Thursday morning - October 25, 2018 we steamed under the Verrazano Bridge and into
New York Harbor about 0445

The HMS Queen Elizabeth Aircraft Carrier was anchored in the harbor 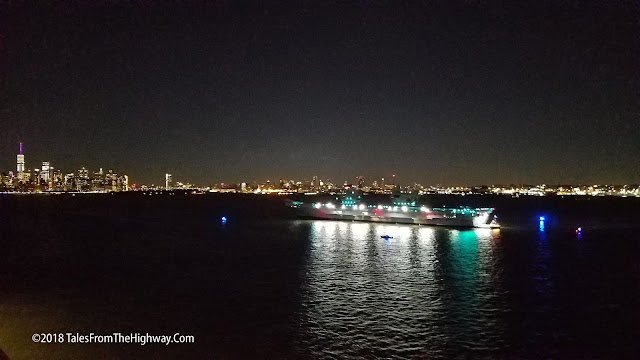 The lower Manhattan Skyline at dawn on a crisp clear late October morning.

The moon setting over the harbor and Statue of Liberty 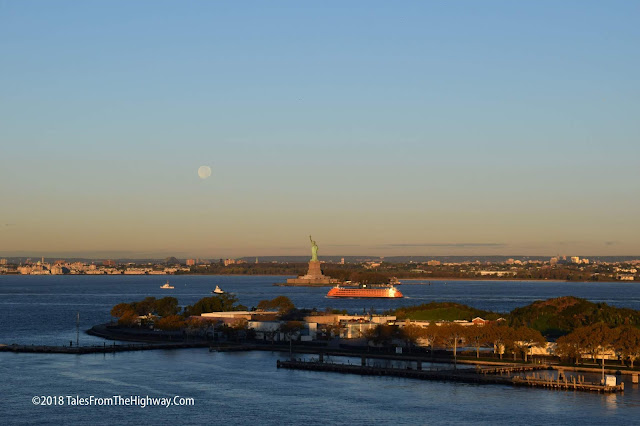 Arriving in Brooklyn, due to the dogs - we were among the first off of the ship.
We then went to the head of the line and wisked thru immigration and customs.

By 915am we were meeting our limo driver who was waiting for us and by 930 we were on our
way back to the bus in south Jersey.

Arriving at the bus - everything was in perfect order and after turning on systems,
connecting the batteries etc - the car and bus fired up as if they had been sitting for
5 days instead of 5 months.

While Kate went food shopping I started the process of disinfecting the water system,
installing new water filters, and getting the bus ready for departure.

By 2:30pm we had shopped for food, and were hooked up and on our way.

It was the perfect end - to a perfect crossing - capping off a brilliant 5 month trip.

In the not too distant future I want to do a recap of the trip but first we have a ton
of things to get done in Arizona.

Hope you enjoyed the trip as much as we did.

Stay tuned - retirement comes in less than 90 days and then
we kick it up a notch!