A five hour Sunday stroll westbound found us in Hot Springs, Arkansas.
Our planned destination was the National Park Campground in
Gulpha Gorge but upon arrival we found to my surprise that the no reservation
campground was filled so we had to enact plan B.

So I entered  new coordinates into the GPS and we headed about 8 miles
south to our alternate - Catherine's Landing RV Resort. 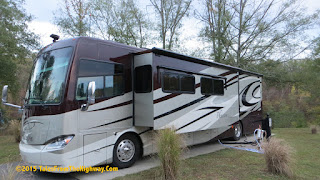 We are backed in to a lovely site on the shore of Lake Catherine, which at our location looks
more like a river.  We are enjoying watching the waterfowl arriving and departing
on the placid water.   Its my second choice but certainly not second rate! 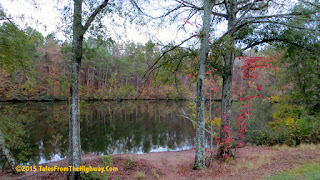 Of course our stop here was to visit....
You guessed it!  The Hot Springs!

Known to Native Americans for thousands of years, this area became known to the
rest of us much later than that.   Development began in earnest in the 1800's and the
Federal Government immediately saw a need to protect the natural resource for future generations
so the Hot Springs Reservation  was established in 1832 - long before the first National Parks.

The bathhouse of the day filled as much a medicinal need as they did recreational.
The hot waters were thought to be healing and many patients who had exhausted
more traditional medical approaches would be sent here as a last resort.

Today there are 8 remaining bathhouses still lining Bathhouse Row
but only two of them are still operating as Bathhouses.

The Buckstaff Bathhouse provides the traditional Bathhouse Experience
as would have been provided in the late 1800's and early 1900's.
The full soak, heat, scrub down experience while naked or wrapped in a toga.

People have described it as walking back in time and more like a clinical detox
than a day at the spa, and not for the modest.

Several others remain and are open as various National Park facilities, but
no longer provide bath house services..

Below is the Buckstaff, and looking down Bathhouse Row. 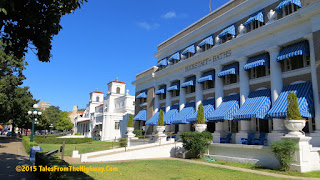 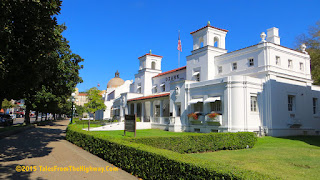 The Quapaw Bathhouse - still in operation. 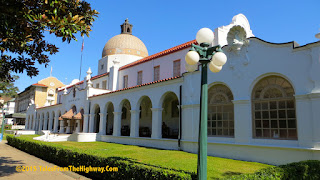 The Jewell of Bathhouse row - The Fordyce Bathouse is now the
National Park Visitor Center and Museum. 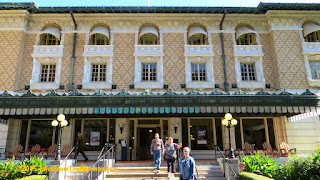 Inside the Fordyce, segregation of the sexes was the order of the day so the
bathhouse was divided into Mens and Womens sections.

Unlike today - there was no "couples" bathing.

The Traditional Bathhouse experience might consist of a hot tub soak, sitz bath,
followed by a steam cabinet and then a needle shower, a hot pack of towels,
then a massage and cool down.

All services were provided under the careful assistance of
attendants who custom tailored the regimen and catered to patrons individual needs.

There were different rooms for each of these services throughout the bathhouses.

The mens Bath hall is crowned by a stain glass mural over a statue
of Hernando DeSoto receiving a gift of healing waters from a Native American Maiden. 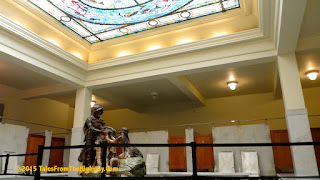 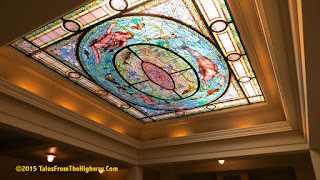 Part of the bathing experience was the Needle Shower.
An attendant would carefully regulate the temperature and adjust the valves
that supplied water to numerous shower heads that would cover the entire body at once. 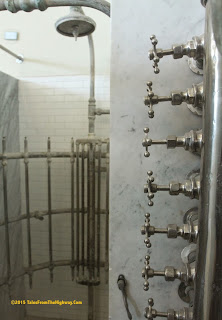 Steam cabinets were also integral to the process. 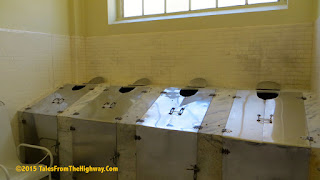 The ladies tubs.  You can see each one was in a separate stall. 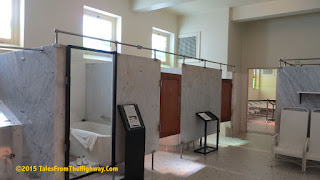 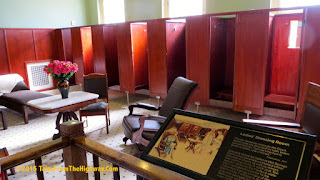 The entry lobby.
After their treatment, patrons could relax on the expansive porch before embarking on
their next exhausting adventure. 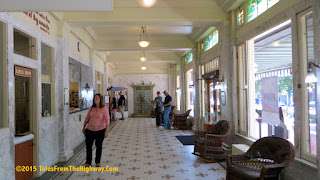 While in Hot Springs we decided to follow that age old advice:
"When in Rome....   take a bath".
So it was off to the Quapaw and their multi tired,
multi temperature public pools.

For only $20 each we were presented with a towel and locker key, and
escorted to the mens & ladies locker rooms.

Kate and I met at the pools and proceeded to spend several hours bouncing around from
pool to pool and immersing ourselves in liquid mineral bliss under a stain glass
canopy that let in filtered light from outside.

The pools are all different temperatures so when we got too hot it was into a
cooler pool and so on.  Hydration is important and they have coolers filled with
water and cups to help in that regard.

A couple of pool attendants kept the floors constantly mopped of any water. 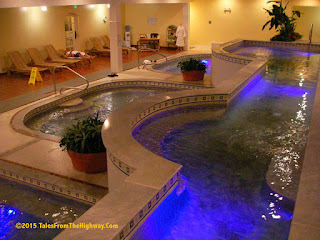 Kate - ever the yacker - even managed to make friends with this very very old
local woman, who proceeded to give Kate a back & neck massage in the pool.

I think she wanted to take Kate home for an encore if you catch my drift.

After an afternoon in the pools my knees were all loosened up and feeling fine, and
we headed to Rocky's Corner, a local pub and Pizzeria for some deep dish Chicago
Style Pizza to take back to the bus for dinner.

And with that - our visit to Hot Springs has concluded.
Tomorrow we are off to Wylie Texas - about 4 hrs Southwest - where we
will stay at an Army Corp Campground on Lavon Lake.

While there perhaps a visit to the Southfork Ranch (remember JR?)
will be in order.  It is only a few miles from where we will be staying.