It's Thursday night...  July 12th
We are in Shawnee State Park in Pennsylvania.
Our drive from our last stop in Indiana was 485 miles and took
about 9 hours with stops.
Shawnee is a very pretty campground...  I wish we had more time to spend here 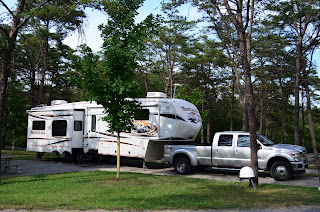 The change from the pine forests of the west to the lush deciduous forest here in
the east is a bit of a culture shock when it happens so fast.
Our ride today took us down about 30 miles of the Old Lincoln Highway.
The lincoln highway was the first coast to coast highway.
It was a patchwork of trails and roads and was created in a time when
some people believed that it was not the job
of government to build highways....   sound familiar?
On Sept 1 1928, Boy Scouts from across the country placed 3,000
stone markers... Custom designed cast concrete with a bronze head of Lincoln,
the highway logo, and a blue directional arrow one every mile....
to mark the entire length of the Lincoln Hwy.
9 years before the Boy Scouts marked the road,
in 1919, a caravan of Army Vehicles struggled to cross
the US from coast to coast as a demonstration of military preparedness.
It took them about 2 months with many mishaps along the way.
Their struggles were widely publicized and helped shape public opinion
that good roads were needed.
Ironically, a young officer in this 1919 caravan had the opportunity 20+ years later
during World War II to see the German Autobahns first hand.
Upon his return to the US after the war, using the Autobahns as his inspiration,
he was able to create and sign the Interstate & Defense Act of 1956
that created our Interstate Highway System.
That young officer was Dwight Eisenhower.
Today the Lincoln Highway, like route 66 -  is just a memory.
There are some reminders however...
If you travel the side roads of America they are waiting for your discovery. 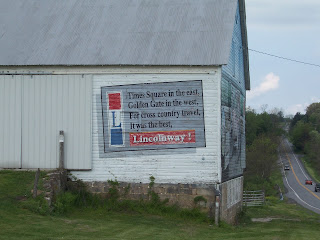 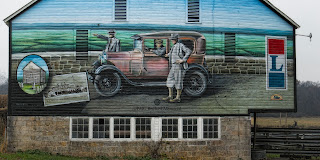 The Lincoln Highway...
Not Forgotten.
Posted by GregK at 6:57 PM