Things that break in the night Dec 20 Day 16

Barbados got in the way...
We sighted land about 20 miles off the coast.  Our course took us right across the island - not an easy task for a sailboat so we needed to divert a bit to the south to make it past the southern tip of the island.  Our winds were not entirely cooperative in this endeavour as everytime we tried to divert just enough to pass the island safely, the port side jib would start collapsing due the the angle of the wind.  Hours of tweaking (pinching) our course and we passed about 1 mile south of the island just before sunset.
Also - just before sunset, all of a sudden both jibs developed a wrinkle at the bottom of both sails where they connect to the deck.  A couple of seconds and we realized that the jib halyard had separated (broken).
Now for you non sailors let me try and explain the rig that supports the jibs...
Picture a pull down type window shade.  When you pull the shade down it unrolls from the wooden roller and tightens a spring.   When you pull down again - the shade will pull up automatically due to the spring tension releasing.  Well our jib furling gear is sort of the same.  Picture that wooden shade roller being in a vertical orientation, the sails (like the shade) get pulled by lines and unroll.  Instead of a spring, there is a line that wraps around a drum when you unroll the sails so that when you want to roll the sails back up (furl them) you pull on that line, it turns the drum (and tube) and rolls the sails back up.
Here is a picture of the rig taken underway in the middle of the Atlantic...  you are actually looking at 2 jibs (normally only one is used) one jib on the right and one jib on the left.  The roller that rolls them up is right in the center of the two. 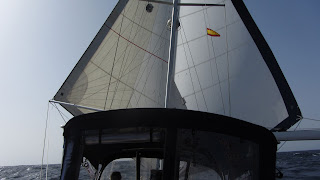 What happened is that another rope that is used only to haul the jib (s) vertically up the roller (it's used only to install or remove the jibs) broke.  The sails were about to slide down the roller and dump into the sea....  being trailed over the side by their control lines.   Not a good situation.  Quick action by all of the crew & we were able to roll the jibs back up before they wound up in the sea.  Considering that each jib probably weighs about 100 lbs or so you can imagine with the wind blowing, the seas rolling us, it would not have been an easy task getting the mess cleared up.  Had it happened an hour or so later after dark - it certainly would have presented a more difficult challenge.  As it turned out - it was a minor inconvenience for the remainder of the journey.
It was like a twin engine aircraft losing one of its engines.  Had it happened in the middle of the Atlantic it would have slowed us considerably and forced us earlier to move to our backup position.  The timing has been fortuitous in many respects.
Needless to say - we switched to our main and staysail and flew "wing and wing" with gusts to about 36kts and continue to fly downwind towards Grenada.  Our miles to go is now about 140 and the anticipation is starting to build big time among the crew.
Posted by GregK at 10:23 AM